Home > The Weather and when to visit Zimbabwe

The Weather and when to visit Zimbabwe

Visitors always comment on how good the weather is in Zimbabwe and there is no “right time” to visit as there are warmer and cooler seasons, most days have quite a few hours of sunshine, but there are certain seasons for special interest groups.

The lower parts of the country including the Zambezi and Limpopo valleys get generally hotter than the highveld from Bulawayo in the south east to Mutare in the Eastern Highlands. The altitude (1,500 meters at Harare) on the highveld moderates the heat and temperatures stay lower with Eastern Highland places like Nyanga, Bvumba and Mutare usually cooler than the rest of the country. Victoria Falls, Beitbridge, Bulawayo and Kariba will always be hotter than other areas due to their lower altitude (885 meters at Victoria Falls)

The two main seasons are the rainy / green season from November to May and the dry season from June to October. Most visitors going on safari will visit in August / September; those who want to see Victoria Falls when it is in full spray come in April; adrenalin-seekers wishing to go white water rafting come in September to December.

This is when Zimbabwe gets rain, but unlike Europe the rains usually come as heavy thunderstorms with plenty of lightning and thunder, but generally don’t last for more than a couple of hours. Many days will start with clear skies but as the heat builds up the storm clouds gather on the horizon, building up and getting lower and turning grey-blue, until a cold front blows in and the clouds release their moisture. Suddenly the first blast of lightening followed by a thunderclap which echoes across the sky and raindrops beat on the hard ground and everyone comments on the distinctive earthy smell which the rains bring and soon after the emerging fresh sprouts of grass and new leaves confirm that the cloying heat of October and November is finally over.

January is generally the wettest month, but even then sunrise is at 5:30am and sunset around 6:00am. Temperatures are dropping steadily from November through to January with the average daytime temperature about 26⁰ Celsius during the day to around 16⁰ at night.

The rains drop off dramatically and nights and mornings get generally cooler with average daytime temperature of 25⁰ Celsius and 12⁰at night.

At this time of year Victoria Falls is covered in spray as all the rainfall that fell in Zambia is now flowing down the Zambezi River which is at its annual highest level. It’s impossible to go white-water rafting now with the River so high, but on the other hand it is a good time to visit Nyanga, or the Bvumba, or the Chimanimani as the forests are lush and well-watered and all our European migrant birds are here raising their young.

Even though it is now winter and dry and cool, this is a good time for game-viewing and going on safari during the day and then sitting around a campfire with a mug of coffee, or a brandy at night. Average daytime temperatures are 21⁰ Celsius with a night-time average of 7⁰ and the grass is turning from green to a straw colour.

This time is the equivalent of the European spring and it is now dry and warm with average daytime temperature of 29⁰ Celsius, and night-time average of 9⁰. It is the best time to go game-viewing, or on safari at any of Zimbabwe’s National Parks such as Hwange, Mana Pools or Victoria Falls as the grass and vegetation is sparse and low and because water is now scarce the animals will be out looking for water and therefore more visible.

It is also a good time for fishing on the Zambezi River, or on Lake Kariba, or at one of Zimbabwe’s many lakes as the rivers and lakes are ‘cleaner’ in the dry season and is the best time to visit for white water rafting at Victoria Falls as this is the low-water season on the Zambezi River. On the highveld the msasa trees now begin to turn into glorious shades of red, yellow and orange and the Eastern Highlands are particularly spectacular at this time of year.

October is often called ‘suicide month’ by residents as it is very hot, in the Zambezi Valley it can get up to  40⁰ Celsius and everything in the landscape seems to be waiting for the start of the rains.  The dryness is only relieved by the first flush of new leaves which emerge and in the towns the jacaranda flowers which bring a wonderful purple to brighten up the streets. If there are surprise rains, the flowers will fall and the streets in Harare, Bulawayo, Victoria Falls. 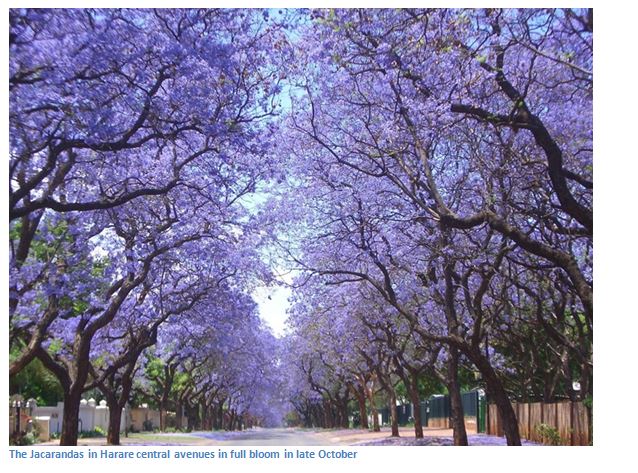