Lobengula Avenue, Gweru, on the eastern side of the Civic Centre. Lobengula Avenue runs parallel and east of the A5 as it heads out of Gweru for Bulawayo

The Zimbabwe Military Museum began with a collection of historic aircraft stored at Thornhill Air Base nearby. These aircraft were eventually moved to the premises of the School of Defence and then the Museum opened here in January 1974 thanks to the fundraising and efforts of Mrs Boggie, Mr Fyfe and Gweru residents.

The entrance to the Military History Gallery displays the two key figures of the Chimurenga (Mbuya Nehanda and Sekuru Kaguvi) and the Ndebele King Lobengula to signify their importance during the liberation struggle. However, the entire gallery is filled with illustrations and short profiles of nationalists such as Josiah Chinamano, Herbert Chitepo, Joshua Nkomo, Sally Mugabe and Leopold Takawira. A much more entertaining and useful exhibition could be made by showing a continuous film of the role played by these liberation figures in the struggle and by ensuring that the historical events of the period from the 1900 to 1980 are easily visualised and complemented by relevant illustrations, diagrams, maps and tables. The Military History Gallery concentrates on the dominant figures, to the exclusion of everything else, a sycophantic display designed to please current leaders, but which minimises the role of the early peasant struggles from 1900 to 1925, the struggle of the trade Unions from the 1920’s, the struggle for “one man, one vote” through to the 1960’s and the armed struggle from the 1960’s to 1980 including displays of the battles such Dzapasi, Nyadzonya and Chimoio which schoolchildren will have studied.

The current exhibition leaves visitors, especially schoolchildren, more confused than enlightened and needs to be reviewed and improved.  We know funding is an issue in the current economic crisis, but National Museums and Monuments of Zimbabwe has shown what it can do at its Ziwa and Danan’ombe Site Museums and the Domboshava interpretive centre with its existing talented staff.

The Police Gallery features every commissioner since 1903 to the current day and is of little relevance to the Museum or the general public. This gallery should be transferred to Tomlinson Depot, or Police headquarters.

Similarly, the Guinea Fowl Memorial Hut Gallery lists head masters, school captains and house heads from 1947 to 1978, but it is not relevant to the Military Museum and should be transferred back to Guinea Fowl school whose students might want to update the exhibits and make them more relevant to themselves.

The Aviation gallery has a wonderful collection of aircraft, mostly in complete condition as follows:

It is well-known that the Zimbabwe Air Force has a number of aircraft that are no longer flying because they either have been retired or damaged, including an AB-205 ‘Cheetah’ helicopter; a Dakota DC-3 troop carrier, an Alouette III helicopter, a Riems Cessna-337G ‘Lynx’ and a Hawk-60. Instead of leaving these valuable historical relics parked in the open; useless and rusting, they should be gradually restored by Zimbabwe Air Force apprentices as part of their training and donated to the Military Museum.

Similarly the Armoured Vehicle Hanger has some very interesting vehicles such as the 4x4 field artillery tractor and the Marmon Herrington Armoured Cars, but they need better labelling and explanations of their context, so that young visitors understand and take away some meaningful knowledge, rather than just a confusion of objects. 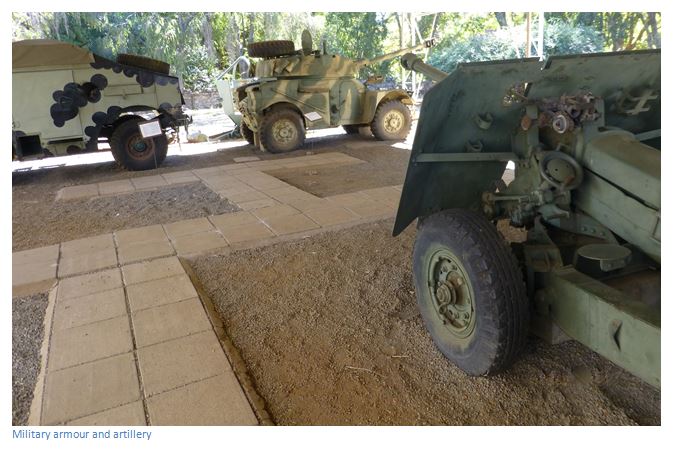 When to visit:
All year around Monday to Saturday 8am to 5pm
Fee:
An entrance fee is chargeable
Category:
Historic
Province:
Midlands