National Monument No.:
3
Why Visit?:
How to get here:

Take the Bulawayo Gweru (A5) as far as Daisyfield which is 16.4 KM from Shangani, or 39.5 KM from the Antelope Park turnoff at Gweru. From Gweru turn left off the national highway onto the gravel road, 0.32 KM turn left and cross the railway track passing a sign in brown which reads Naletale Ruins; 0.7 KM turn left around the school and head south on a good farm track, 7.4 KM enter a lane of giant gum trees, 8.9 KM cross a stream, 10 KM cross another stream, 17.9 KM continue straight on the track, 21.1 KM reach Naletale Site Museum where there is a welcome sign.  To return to Shangani via the De Beers Road drive west from the Site Museum, 2.1 KM turn right and drive north for the distances stated below.

An alternative route is from Shangani turn right off the A5 where it is signposted for Naletale / Danan’ombe (formerly Dhlo Dhlo Ruins) O.64 KM turn left for Naletale, 17.7 KM continue straight on ignoring road to the right, 24.1 KM turn left off at signpost for Naletale, 26.16 KM reach Site Museum and park car.

Finally an 800 metres walk up the granite kopje following the seven excellent sign boards with photos and explanations setting out the historical context of Naletale, the architecture, the archaeological excavations that have taken place and finds of local and imported wares, the socio-political background of Naletale and the background to its eventual decline. A final sign board discusses some of the problems of conservation of dry-stone walling and acknowledges the funding through the American Ambassadors Fund for Cultural Preservation (AFCP)  The footpath through the mountain acacia takes visitors to the top of the kopje and Naletale Monument at 1,400 metres with marvellous views over the surrounding countryside.

As the visitor approaches the southern side of the building, the elaborate and highly decorated walling becomes evident; chevron, variegated, dentelle, herring-bone, cord and chequer patterns, but in addition, reddish-brown banded ironstone inserts from the gold belt 20 kilometres away highlight the top and bottom sections of the walls which is then topped off with six equally spaced turrets each highlighted with an upright granite piece set in it. These are part of the original building, but because of vandalism, it was essential to cement them in position before they were completely destroyed. Tom Huffman who has done research on the Venda culture suggests the wall patterning is code. For example:  check = male crocodile for a man of senior status, herringbone = female crocodile for a woman of senior status, cord = water snake for human fertility, chevron = fertility of the earth.

Following the decline of Great Zimbabwe in the 1480’s the Torwa State (Torwa means “strangers” according to Portuguese documents) rose to prominence and the building of Khame commenced in the late fifteenth century and Danan’ombe in the sixteenth century, before the Torwa rulers moved their capital to Naletale in the seventeenth century. All these places have the same architectural style of creating terraces within surrounding walls, always built in tiers which needed to be level in order to support the wall decoration (Type 4 platform complexes according to Roger Summers’ classification) and this Torwa State flourished between 1450 AD and 1693 AD when their wealth in cattle led to envy and they were invaded by the Rozvi, a powerful militaristic grouping that came from north eastern Zimbabwe and conquered and assimilated them. The Rozvi used Naletale as a settlement, but their economy went into a gradual decline in the late eighteenth and nineteenth centuries as their agriculture waned. Additionally civil wars at home and between the tributary kingdoms weakened gold production and the once thriving long-distance trade until the Nguni took over in the 1830’s during the Mfecane and the Ndebele came to dominate this part of Zimbabwe. 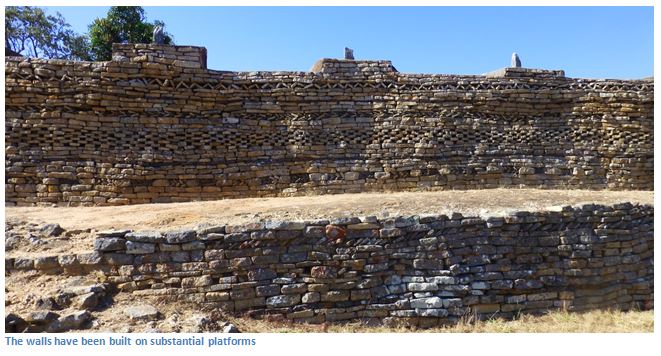 The site had been damaged by treasure seekers, most notably the Ancient Ruins Company and the first archaeological work was carried out in 1905 when Randall-MacIver walked from Shangani siding to do a very short excavation. He found a stone-built underground chamber beneath the central hut and opening to it by a small hole, the chamber was only 1.2 metres deep, but widened beneath the daga floor of the hut. Randall-MacIver thought it was “a receptacle for valued possessions” but this seems unlikely and similar chambers at Khame and Zinjanja (formerly Regina Ruins) are thought to be grain pits.  Roger Summer’s more comprehensive excavation in 1963 revealed broken pots, similar to that found at Khame and Danan’ombe, which are often brightly coloured with complex patterns forming an elaborate decoration.  Foreign imported objects included Chinese blue on white porcelain. Numerous local furnace sites within 4 kilometres produced iron nails, twisted copper bangles, spear heads and agricultural hoes and soapstone smoking pipes.

The main structure is an oval-shaped enclosure with a maximum diameter of 53 metres built of dry-stone walling divided into seven internal spaces radiating from the centre which has a central platform 2.5 metres high which was used by the Ruler as his residence. The walls are generally 2 – 2.5 metres high and vary from 1 – 3 metres in width.  There are two entrances to the enclosure. 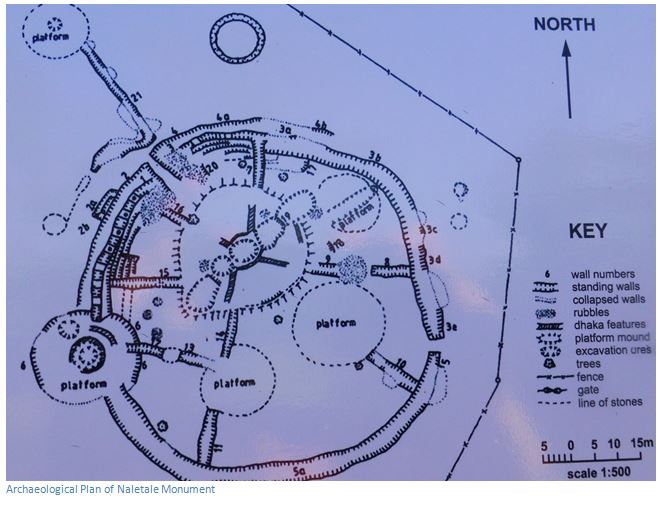 The population at Naletale must have been very small as only the traces of four huts were found. Its position is very exposed and windy and all water must be carried a long way; it was suited for occasional residence or as a retreat only.  From the archaeological evidence it appears that the Monument were never completed and were constructed very late in the wall building period. The stone walls are just the remaining part of the original structure as the huts with their thick compacted dhaka floors have vanished.  The stone walls are not defensive; they were designed to flaunt their owner’s wealth over the general population. Naletale may have been a royal retreat where the King would come to relax with his wives and an administrative centre where he could confer with his sub-chiefs.

The occupants of Naletale and similar settlements at Danan’ombe and Zinjanja (Regina) probably ollected tribute from vassal chiefs under their jurisdiction. Their economy depended on crop cultivation and cattle rearing with a daily diet of cereals and legumes such as millet, sorghum, groundnuts and cowpeas supplemented by meat from their cattle and hunted game. The economic wealth of the whole community depended on cattle wealth and farming. Gold and ivory was exchanged with Swahili merchants from the east coast of Africa; this trade had been carried on since the days of Mapungubwe and Great Zimbabwe in exchange for glass beads, cloth, and porcelain and glass vessels. The Portuguese took Sofala in 1505 and tried to oust the Swahili merchants, but with limited success.

Dry-stone walls are very prone to structural subsidence and over the years sections of walling had collapsed and were in need of restoration. Chris Dunbar made an application to the World Monuments Fund (www.wmf.org) which resulted in Naletale being nominated to the 2012 Watch; but funding was not awarded until November 2013 when the Ambassadors Fund for Cultural Preservation of the U.S. Department of State awarded the National Museums and Monuments of Zimbabwe (NMMZ) sufficient funds for the restoration of the outer wall and radiating interior walls as well as the main entrance walls. This project was completed between 2012 - 2014 and was carried out by local stone-masons and archaeologists from NMMZ. 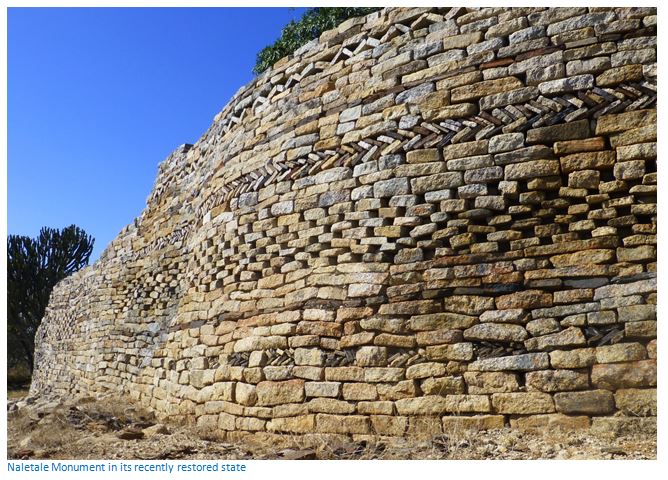 When to visit:
All year around Monday to Sunday 6am to 6pm
Fee:
An entrance fee is chargeable
Category:
Scenic
Ruins
Building
Province:
Midlands