Mvuma is at the junction of the A4 Harare to Masvingo Road and the A17 to Gweru.

The chimney at Mvuma is visible from many kilometres away standing on a prominent kopje and surrounded by golden mine-dumps; it was constructed by Falcon Mine in 1913; then the largest gold, copper and silver mine in the country when the main shaft was over 200 metres deep. The ore required a particularly complex process of smelting which produced toxic gases which needed to be vented at a safe height; hence the chimney stack, which stands 40.2 metres high. 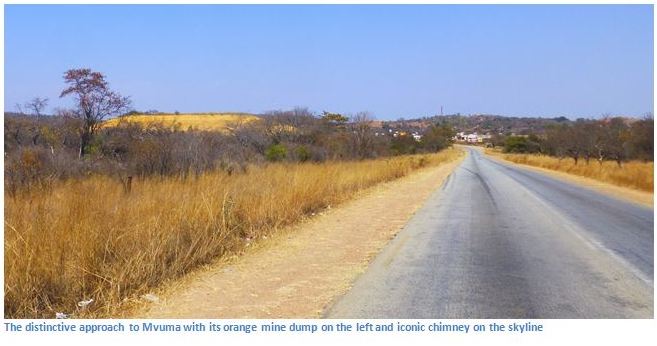 R.C.E Nissen in a visit described in October 1914 referred to: “the sulphuric latitudes of Umvooma, which hamlet presides over the destinies of the Falcon Mine. From afar off can be seen the huge chimney stack belching forth a dense, yellow mass of poisonous the smoke, which as we draw near drifts earthwards and irritates the lungs. On a closer acquaintance with the town, I find this sulphuric atmosphere responsible for the endless quantities of spirits; and it occurs to me that here originated the fable of Rhodesians being responsible for half the world’s output of whisky.” Lyn Mullin, author of the amazing book, Historic Trees of Zimbabwe, reports that in 1922 the area that would be planted by WP de Klerk as the Mtao Forest was completely barren and wasted due to the poisonous fumes and it took many years for the area to recover from its effects.

Gold was discovered in 1896, but had been mined in pre-colonial times. Roger Summers reports the shafts were 10 metres deep and FP Mennell estimated 10 – 50,000 oz. (300 – 1,500 kilograms) of gold had been extracted. The smelting technology employed by Falcon Mine was exceptionally efficient for the time, and as the plant was the only one of its type in the world, similar ore was transported from the Otavi-Tsumeb Mine in Namibia for processing, until the smelting plant closed down around 1925.

R.C.E. Nissen reported that in October 1914 the mill house had thirty-six stamps weighing 2,000 lbs (907 kgs) each arranged in batteries and capable of crushing 22 tons (20,000 kilograms) per stamp per day. The concentrates were feed into tanks filled with a solution of water and oil and by mechanical agitating the solution the minerals in the form of gold and copper cling to the oil and rise to the surface as froth. This concentrate was then mixed with ironstone and heated in pots. After 8 hours small, irregular nodules of iron mixed with the gold and copper were produced called sinters, which passed into a blast furnace. Here the slag was separated from the matte concentrate which was further refined into copper and gold.

Job seekers came from across country and the neighbouring countries of Mozambique, Malawi and Zambia seeking employment at Athens Mine which in 1914 employed 110 Europeans and 1,500 Africans. The Falcon Mine then became the Athens Mine, owned by Lonrho Zimbabwe Lonrho, which at its peak employed more than a thousand workers, but a mine shaft mine collapse and the low price of gold led to its closure in 1996. For many years, Mvuma was a hive of activity as the large mine dumps around the town testify.

The chimney was built to provide sufficient draught to ventilate the fumes from the plant.  The base, which is square, now shows an opening on its northern side and from here a ground tunnel connected with the smelter to the north of the chimney. Only the foundations of the tunnel are visible today. According to Peter Jackson’s excellent article, the internal diameter at the base starts at 2.89 metres and reduces to 1.89 metres at the top. The maximum external diameter of the brickwork at the base is 4.5 metres and the top is secured by a heavy cast iron ring. To the west was a second, but shorter chimney, but only the ruined brick plinth remains today. 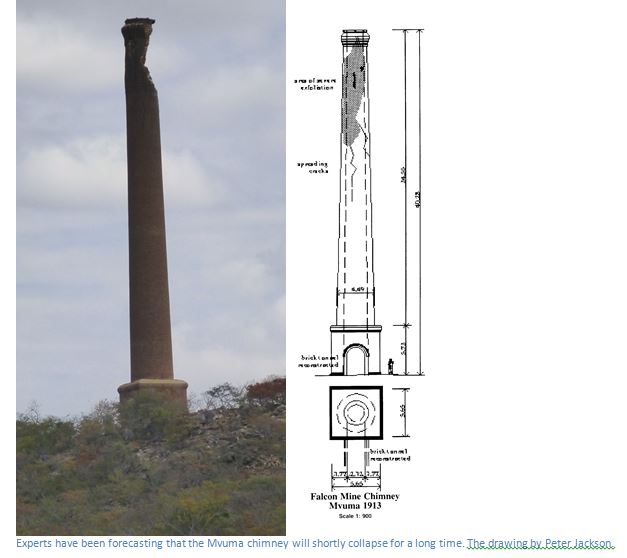 Peter Jackson is very enthusiastic about the chimney as a fine piece of industrial architecture saying the base is handsomely corbelled both top and bottom, whist the apex of the flue is corbelled outward as an elegant termination and the brickwork is of high quality and competently laid. He states the chimney is of classical proportions with a ratio of 1:7 for the maximum diameter of shaft to the chimney’s height.

It has not been used since 1925 and over the years repeated lightning bolts have been knocking off bricks from the top section of the chimney making the structure very fragile and unstable. A section of 6-7 metres of the lightning conductor was reported stolen by Italian prisoners of war, or internees, toward the end of WWII.  The conductor takes the lightning strike safely to ground or “to earth.” Without it, the chimney structure absorbs the lightning bolt and the water saturated bricks may literally explode when the moisture turns to steam.

In 1999 Stewart Scott Africa said in their engineers report the chimney base and bottom half of the chimney was in sound condition requiring only minor repairs to jointing. However the top third of the chimney was heavily damaged die to lightning strikes. No doubt the chimney will continue to weaken and collapse in time. When it does, Mvuma will have lost its most distinctive feature.

R. Summers. Ancient Mining in Rhodesia. Trustees of the national museums of Rhodesia. 1969.

When to visit:
All year around
Fee:
Entrance free
Category:
Building
Province:
Midlands