Que Que (now Kwekwe) was originally called Sebakwe after the nearby river, but as the name was often confused at the Post Office with Selukwe (now Shurugwi) it was changed to Que Que on 1 October 1905. The name is onomatopoeic, having originated from the sound of the frogs in the Kwekwe River.

Most of the early historical records of the town were destroyed in a fire in 1910; it has been suggested the fire was deliberately caused by an official who wanted to destroy the financial records and any evidence that he may have stolen funds from the Post Office.

One of the most notable events in the history of Que Que was the laying of the railway track from Salisbury as far as the Gaika Mine on 5 November 1901 which was celebrated with a grand dinner, speeches and fireworks. The rail siding was then called Globe and Phoenix but renamed Que Que on 1 January 1924. Previously it would take three days to get from Que Que to Gwelo (now Gweru) by donkey cart; with the railway the journey now took only four hours as long as there were no undue delays for the locomotive crew to collect firewood for the locomotive, or to shoot guinea-fowl by the trackside!

The Gaika House was erected in 1895, initially as miner’s quarters, hence the evenly spaced doors along the front of the house which would have each led to separate rooms. The building was sent from South Africa as a pre-fabricated kit of corrugated iron panels on a timber frame; on construction locally fired farm bricks were used to build internal walls which separated and insulated the house. In the early 1900’s, when the building began to be used as the mine manager’s house a kitchen wing was added, which is now on the west face of the house, the verandah was extended with decorated timber gables, and the roof ventilators were added to provide a through draft in the summer heat. 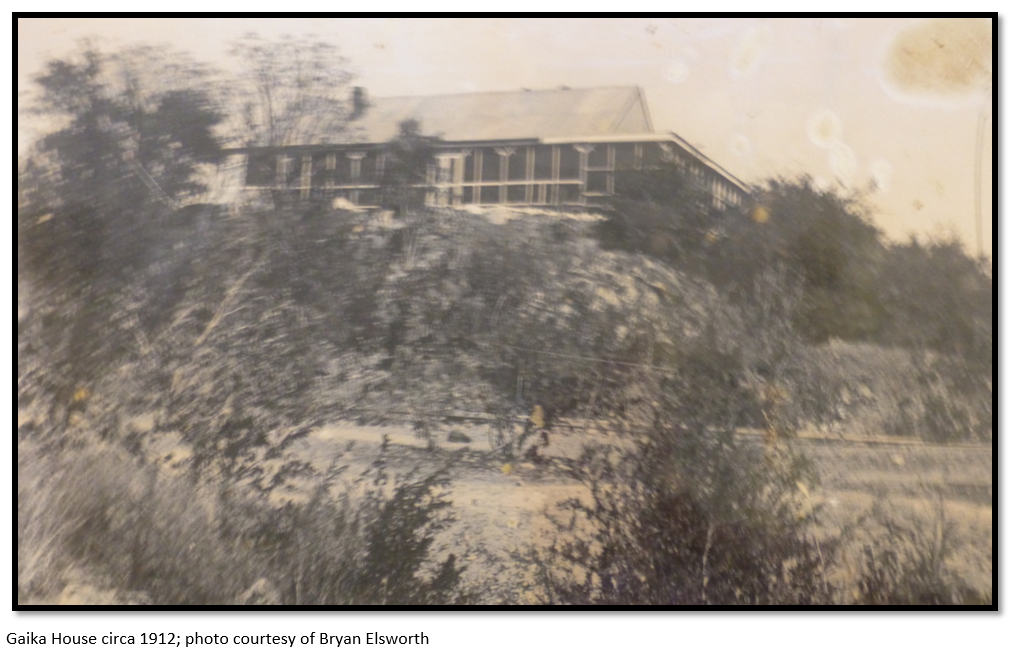 When permission was granted by NMMZ for Gaika House to be moved to its present position in 1989, the building was surveyed, and reconstruction drawings prepared by the Harare architectural firm of Jackson, Kurebgaseka and Wilson before the structure was dismantled in 1991. The old building was in an L-shape, with the living rooms down the long axis, now the north side, and the kitchen forming the short axis, now the western side. The new building has been extremely sympathetically reconstructed as a rectangle with a central courtyard and bedrooms along the long southern axis and a garage on the eastern side with completion in 1995.

The house faces north on the summit of a beautiful wooded kopje surrounded by mountain acacias. (Brachystegia tamarindoides Benth) The interior contains furniture appropriate to the circa 1912 appearance of the house and is currently well maintained. The success of the project is a great tribute to the dedication and perseverance and deep pockets of its owners, Richard and Dawn Edwards and the continued maintenance of its current tenant. 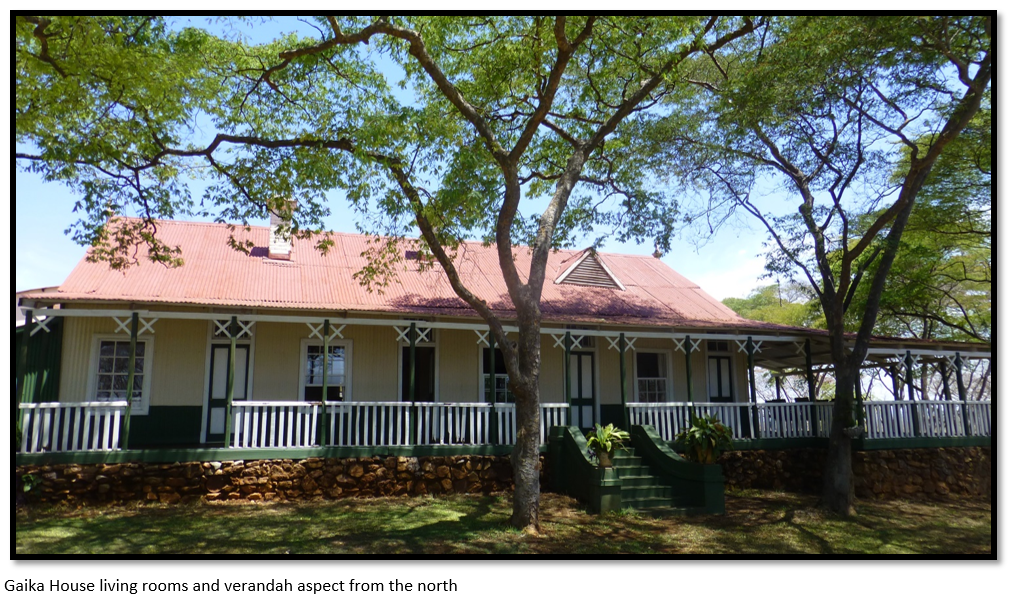 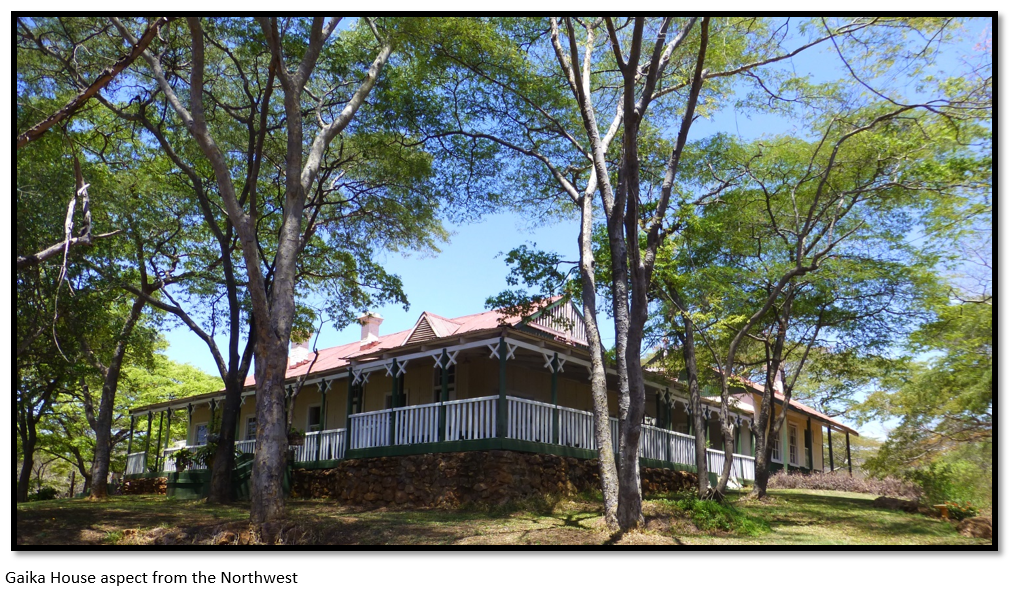 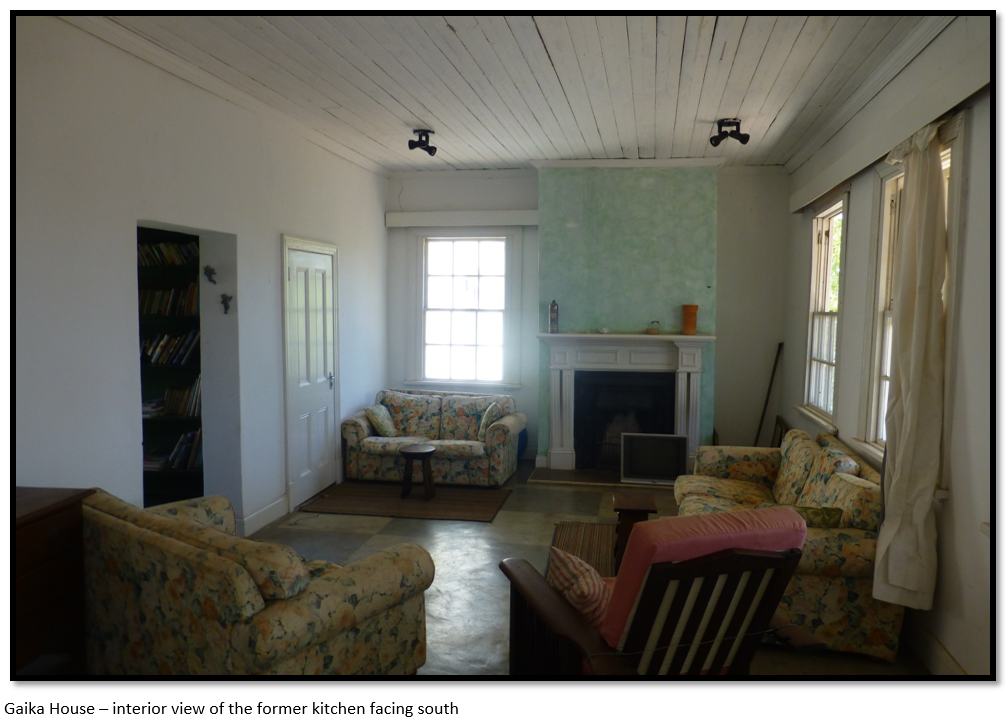 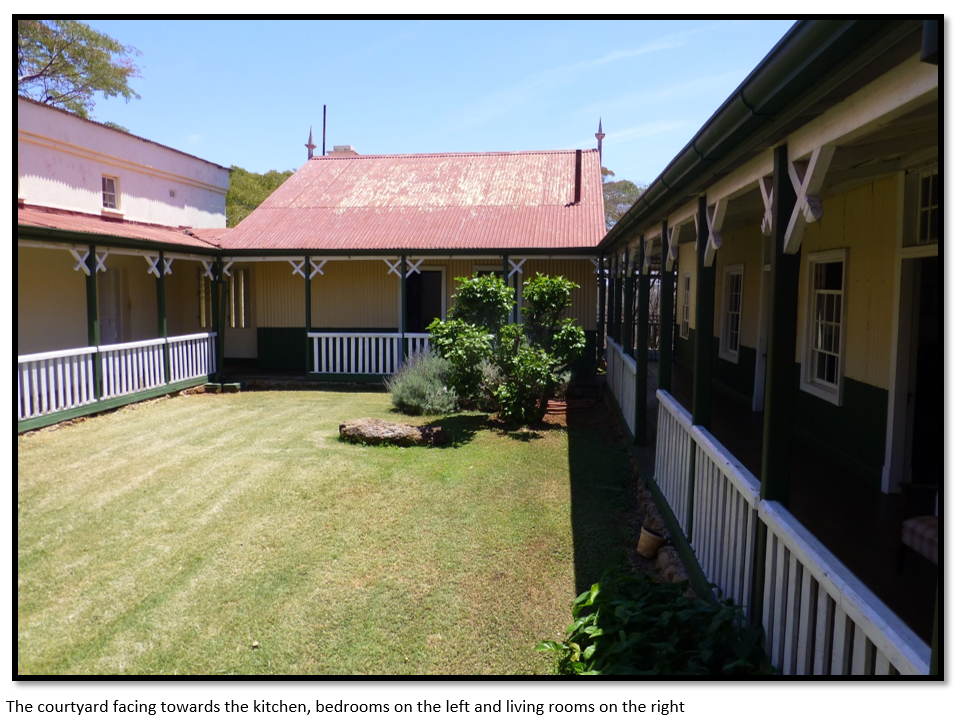 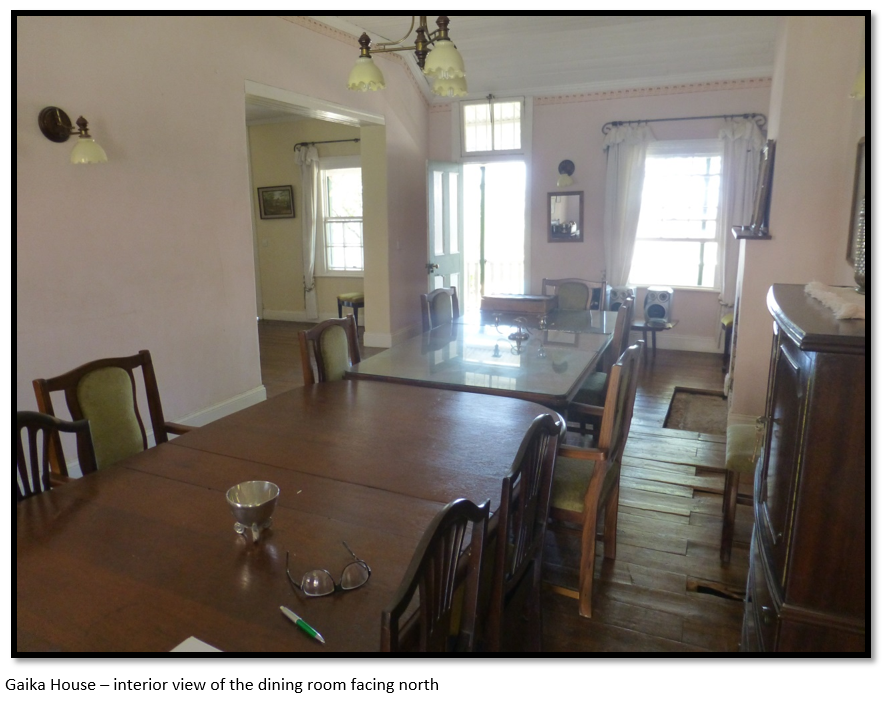 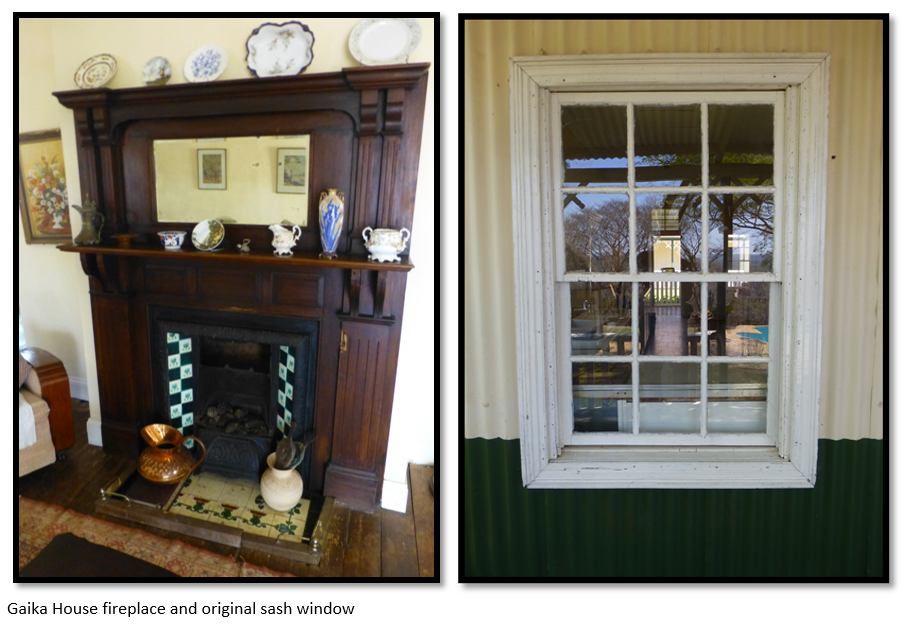 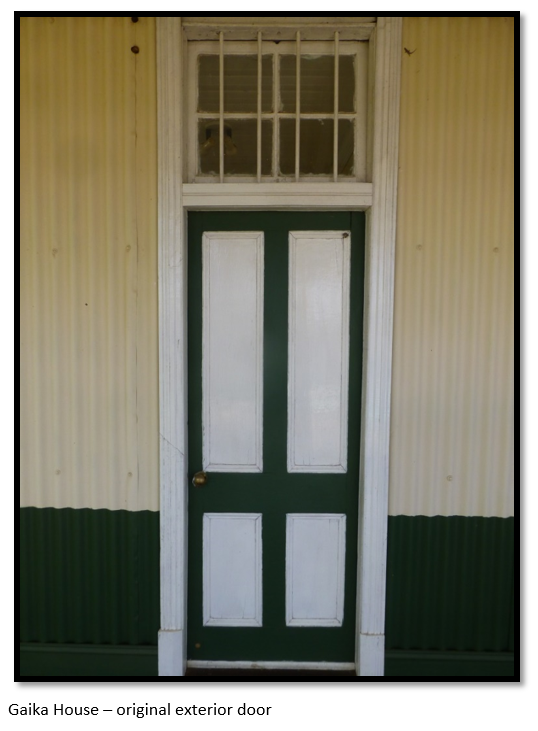 The Gaika Mine is situated just to the south of Kwekwe, between the A5 national road to Gweru and the secondary road which goes from the roundabout to Mvuma, on flat open ground, parts of which tend to become waterlogged in the rains. The original claims are situated within Zimbabwe’s basement schist’s, in the oldest series of three systems comprising the Sebakwian, Bulawayan and Shamvaian and more specifically in the “greenstones” and were pegged on the site of extensive pre-European gold workings.

According to Roger Summers, the Gaika Mine, like the Globe and Phoenix Mine (G&P) is on the granite-schist contact, but unlike its neighbour, the gold has become mineralized into the walls of the reef and A.M. Macgregor in The Geology of the Country around Que Que, Gwelo District Bulletin No. 20 states: “this makes it difficult in stoping to avoid diluting the ore with barren rock or leaving valuable ore in the walls.” This difficulty was first encountered by the pre-European miners who dug out far more than they managed to mill and Walter Currie in 1902 estimated there was 50,000 tons of “ancient chips” or rubble lying around on the Gaika claims averaging 7gms per ton. In fact, this was an under-estimate and it was said at the time that these “ancient chips” paid for the development of the Gaika Mine.

These pre-European miners discovered that at 15 metres the reef split; so, they followed each ore body down leaving a thin section, or “horse” between the two stopes. Eventually it collapsed and killed two female miners whose bodies were only found in the 1940’s during development work; one at a depth of 1.4 metres and the other at 15 metres. The University of Cape Town Medical School reported the one body that they examined was that of a young woman, aged about nineteen years and approximately 5 feet 3 inches (160cms) tall. Iron gads (hoes) chisels, stone hammers and mortars were recovered in the 1930’s and sent to the Bulawayo Museum of Natural History together with wood used in fire setting to crack the quartz veins.  Radio carbon dating of the wood gave a date between 90 – 180 years old, suggesting the Mfecane invasions of the 1830’s may have brought a stop to the deeper level mining.

In modern times the claims were pegged in 1894 by the Chicago-Gaika Development Company, who did a considerable amount of development work before the company was re-organised and floated as the Gaika Gold Mine Company with the first recorded output of 80kgs (2, 568 oz.) in 1905.

Diana Polisensky reports in article entitled “Down in the dumps” on her website www.oncecalledhome.com that production was hampered by drinking water having to be brought from the Sebakwe River by ox wagon. After a legal argument in 1898, the G&P Mine obtained permission to pump water from the Sebakwe River through an 8.5 km pipeline.  However, during the 1894 drought Gaika employees were forced to walk to the G&P with four-gallon (15 litres) paraffin tins to get their water, but as the drought continued the G&P banned their employees from giving water to the Gaika Mine.

The Gaika Mine received little support from the Government Mining Engineer who reported: “The Chicago-Gaika as a whole must be regarded as a disappointing proposition…none of the ore bodies thus far discovered give any indication of permanency or size…  It has been proposed to erect a battery and fifteen stamp mill.  If the future of the mine were assured and there was a probability of the mine lasting for five or ten years then [this investment] would be advisable, but for a property, the future of which is so uncertain, I do not think it would be wise.”

Diana’s article continues: “As predicted, the mine was plagued with irregular reefs.  Instead of one continuous channel, there were sub-parallel or even transgressive ore bodies with variable pay-shoot and sudden cut-offs on their North Reef, Parallel Lode, and Rubble Reefs to the north and Lucy and Lucy West, Magazine, Number’s 6, 8, and 10, South Kopje, Robin Hood, and its Extension. The saving grace was high grade was maintained.  But expenses were high, the North Reef having very high antimony content.

The mine always gave cause for anxiety, as a result of which large scale operations were avoided.  There was difficulty in estimating ore reserves accurately and linking the sampling plans to mill throughput…blocks of ore which should, on paper, have done well were poor and others, considered marginal, often yielded surprisingly good results.”

Diana recounts a story that at the foot of Gaika Kopje some very rich ore was encountered in the earliest development shafts: amber-coloured steatite flecked through with the gold carrying about 100 ounces (3,110gms) to the ton!  A drive was put out on this for about 45 metres north and south.  The rich product was stored in a pole and dhaka hut at the bottom of the garden with a caretaker to watch over the hoard. “By the time the mining engineer arrived to take over more active operations the caretaker firmly believed the hoard to be his own and was difficult to dislodge.  The engineer was of the opinion that much of the gold had been hidden under adjacent development rock dumps.

Diana Polisensky has a further article on her website entitled “The Depression, Que Que’s Lucky Break” which gives the information that the Gaika Mine operated from 1894 and closed in 1929, a period of thirty-five years, when it was thought that the reef, thought to be an extension of the Phoenix reef became exhausted, before mining restarted under new ownership of Que Que Mines as the Chicago-Gaika Mine.

The new company restarted the mine with a capital thirty times lesser than the former company's capital. (£5,000 rather than £140,000) However from 1931 to 1935 the Mine repaid a 400% return on investment per annum for the local shareholders; £100,000 being issued in dividends in four years.

Gaika Mine was the second largest gold producer in the Kwekwe District after the Globe & Phoenix Mine which was the largest producer in Zimbabwe and over its lifetime, the Gaika Mine produced about 23 tonnes of gold from about 2,626,671 tonnes of ore, an average of 8.7 grams of gold per tonne.

The fact that the Gaika Mine Manager’s house managed to outlive the Gaika mine and continues to give pleasure to visitors is a wonderful testimony to the generosity and far-sightedness of Dr Richard and Dawn Edwards and resulted in one of the best-preserved heritage buildings in Zimbabwe being preserved for future generations. 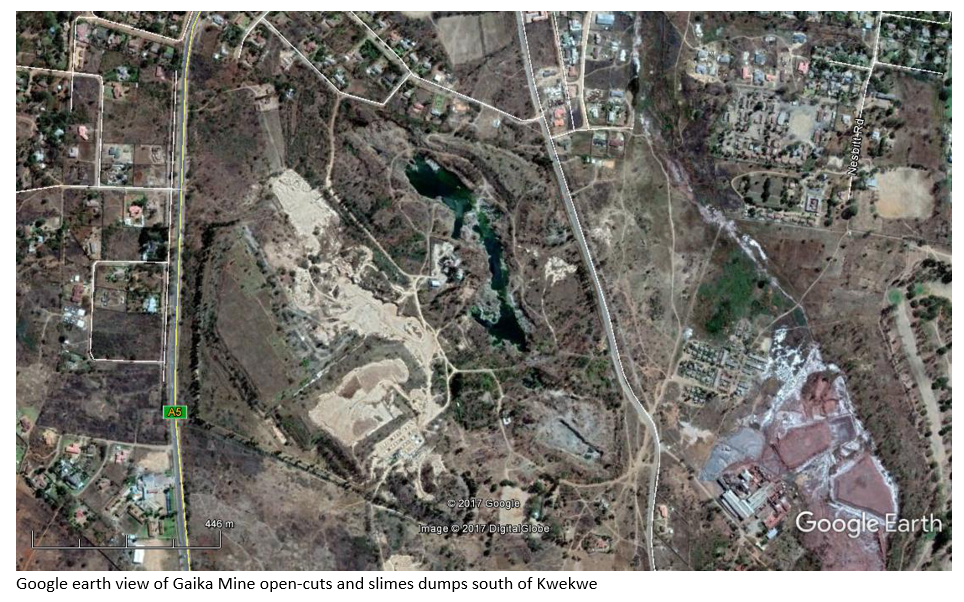 Amongst the historical treasures at the Gaika House is a financial ledger dating from June 1910 to June 1912 written up two columns to the page in £. s.d. in ink copperplate writing the carried forward and brought forward balances neatly underlined in red. I examined the stable account amongst others, which included copious bags of mealies to feed the mules, as well as mule harness sets at £11 5s. 6d. each, whip sticks at 9s. each, tins of Dubbin for polishing the leather at 2s. each and mule medicine at 9d. a bottle. National Museums and Monuments of Zimbabwe. Some historic buildings of the Central Region.

R. Summers. Ancient Mining in Rhodesia. Trustees of the National Museums of Rhodesia 1969.

A.M. Macgregor. The Geology of the Country around Que Que, Gwelo District. Bulletin No. 20