National Monument No.:
67
Why Visit?:

This fort was built in September or early October 1896 under the supervision of Lieut-Col. (later Lord) Baden-Powell and is still in excellent condition.

The fort may not have been typical of most forts as the dry-stone walls appear to enclose a larger area than most.  It was usual to have outside, but under cover of the fort, a double line of pole and dhaka huts which would house the garrison of probably about 25 men. Wagons, mess huts, telegraphist and hospital were usually also outside the fort as it was never expected that the forts themselves would ever have to resist prolonged attack as the Battles of Shangani River and Bembezi had shown the Matabele the futility of trying to attack laagers protected by Maxim guns.

A fort represented a show of force, a stronghold only occupied as a last resort. Collapsed dry-stone walling outside the Ingwenya fort may have been cattle kraals for keeping cattle confiscated from the Ndebele, or horse stabling.

The cemetery, 450 metres north east of the fort is reasonably intact with four of the original pioneer crosses still on site.

From the main Harare to Bulawayo national road (A5) pass through Redcliffe. Distances are from Hunters Road Station. Just before the national road crosses the railway track turn right and head south for 1.3 KM and then turn west, 5.4 KM turn left, 13.4 KM turn left heading south, 13.7 KM turn right heading west, 17.5 KM continue straight heading south west, 23.7 KM reach Fort Ingwenya on the left side between the Hunters Road and the Ingwenya River. The fort is on the south east end of a hill with excellent views to the east and south.

The old Hunter’s Road sweeps around the west side of the hill on which Fort Ingwenya is sited and then goes due south to cross the old Ingwenya River Bridge. The cemetery is 100 metres west of the old Hunters Road and 420 metres northwest of Fort Ingwenya. The cemetery has the remains of six civilians killed in the district at the outbreak of the Matabele Rebellion or First Umvukela. Harbord’s Store foundations are visible west of the present day Matobo Road.

Note: Hunters Road is in poor condition and the easier route, although longer, is via the Matobo Road from Gweru to Silobela described below.

To return to the A5 continue on 300 metres to the intersection with the Matobo Road and turn left shortly before crossing the Ingwenya River. Continue down the Matobo Road whioch is mostly narrow tar in reasonable condition for 42.6 KM before reaching Gweru.

This is an area of intensive artisanal gold mining (diggings can be seen on Google Earth) and the area is full of unmarked shafts with miners living in make-shift shelters and visitors need to exercise care. A local miner, Maramwidze, guided me to the fort and cemetery which I probably would not have otherwise found! Close to the cemetery on the old Hunters Road are the remains of a blue pick-up that detonated a land-mine in the 1970’s.

Fort Ingwenya (either from Ngwena (chiShona for crocodile) or Ingwenya (isiNdebele for hippo) – most likely the latter) was built at the end of the 1896 Matabele Rebellion, or First Umvukela and is on a hill 330 metres in a north east direction from the old Ingwenya River Bridge where the Hunter's road cut by Thomas Baines crossed the river and then ran around the foot of the hill. Baines encountered the “fly belt” north of the Ingwenya River which explains why the Hunter’s road then turns east to avoid the tsetse flies which were fatal to his oxen. 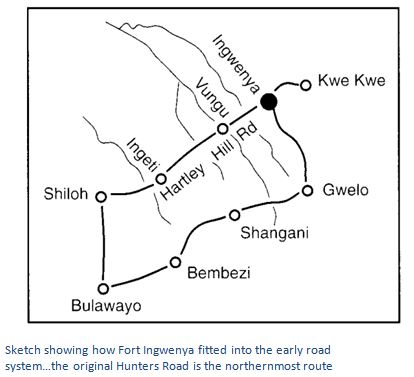 Harbord’s store site is on the northwest side of the new Ingwenya River Bridge and was a stopping place for coach travellers going to Fort Salisbury (Harare) on the Hunter's road. The faint track of the original Hunters road can be seen going from the old Ingwenya bridge below and curving around the hill before heading east. The foundations of Harbord’s store are still visible. Fort Ingwenya became one of a chain of forts which included Tuli, Fort Victoria, Fort Gibbs, Gwelo Laager and Kopje, KweKwe River Fort and Salisbury. 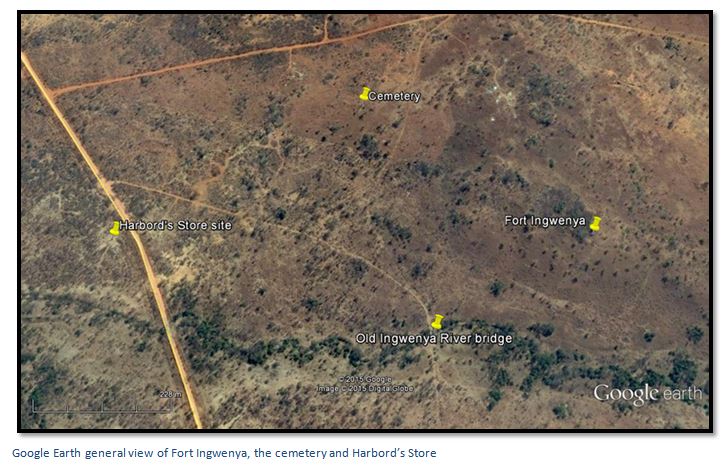 Ingwenya Fort occupies a good defensive position overlooking the bridge site to the south-west, the Ingwenya River 200 metres to the south and has steep slopes on three sides and a flat open space to the north. The fort is built of dry-stone walling and is roughly a square of 18 metres with round bastions, or turrets, at both the northern-west and south-east ends. The south-east bastion is larger with an outer radius of 4 – 5 metres and was probably designed for a Maxim gun. Peter Garlake states that they were only introduced into forts built after 1896. There is a fire step 60 cms wide (2 feet) and 30 cms high (1 foot) on the inside of each bastion and on part of the northern, western and south walls. The walls of the fort are 90 cms thick (3 feet) and 150 cms high (5 feet)

A tree formerly stood at the north western corner which was used as a look-out post. The only fort entrance faces north and had a protective wall on the inside from where the defenders could defend the entrance. The  protective wall is 4 metres long, self-supporting and has largely collapsed. At Fort Gibbs [see the article on the website www.zimfieldguide.com] the protective wall is on the exterior; here at Fort Ingwenya it is in the interior of the fort. 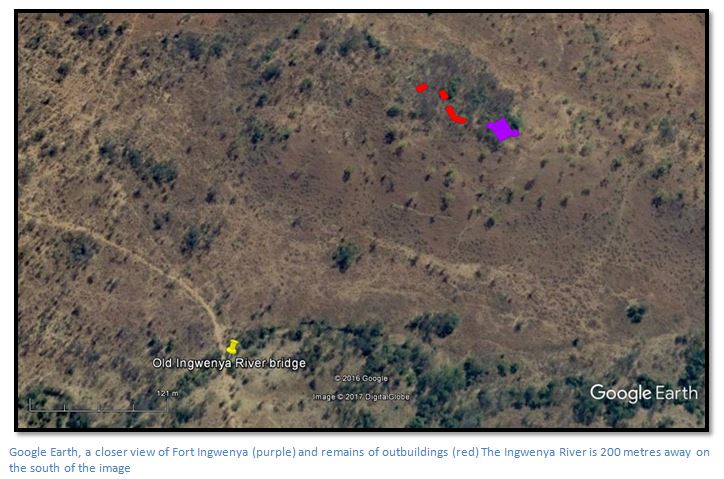 The fort structure is still in good condition, the only walls which have collapsed being on the south-west and the entrance fire-wall.  Inside there was probably a sun-dried brick store roofed with corrugated iron. Horses were stabled outside the forts as they encouraged flies and the whole site was probably encircled by an outer thorn abattis. 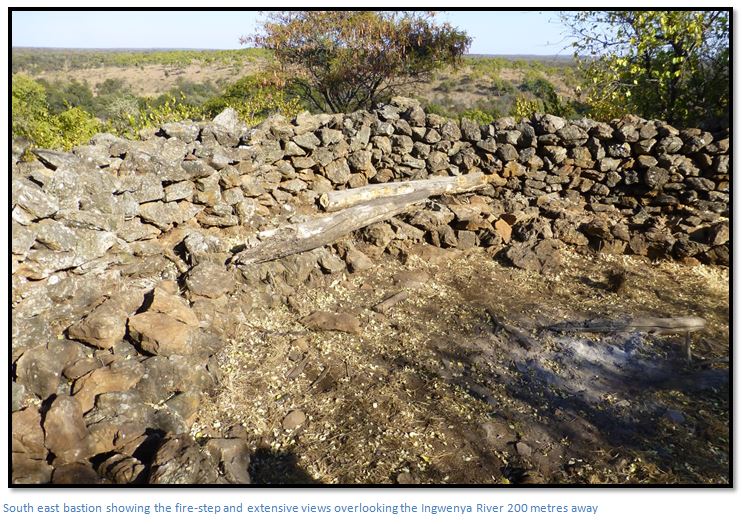 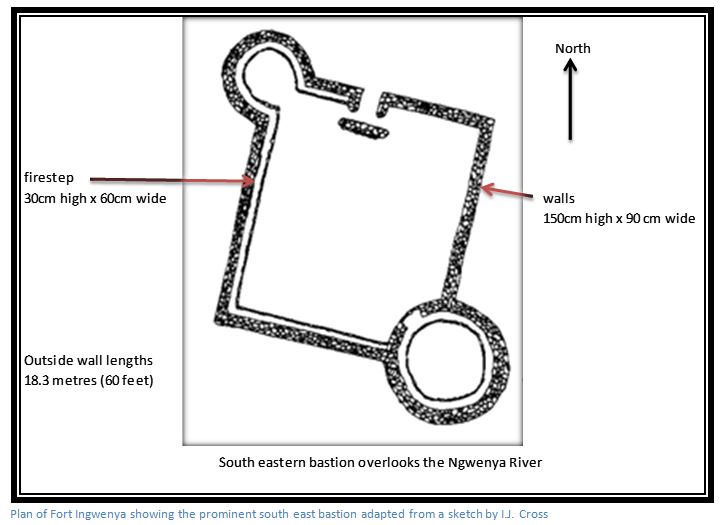 I am a bit puzzled by the description in Ian Tomes’ article which says that in 1993 not much can be seen of the fort and that it is difficult to trace on the ground. He also states the location south of the cattle fence on the 1:50,000 map is incorrect and that it is 50-100 metres to the north of the fence. None of these facts applied in 2015. The fort is in good condition, the walls are easily traceable as the photos show and the site is south of the fence line! 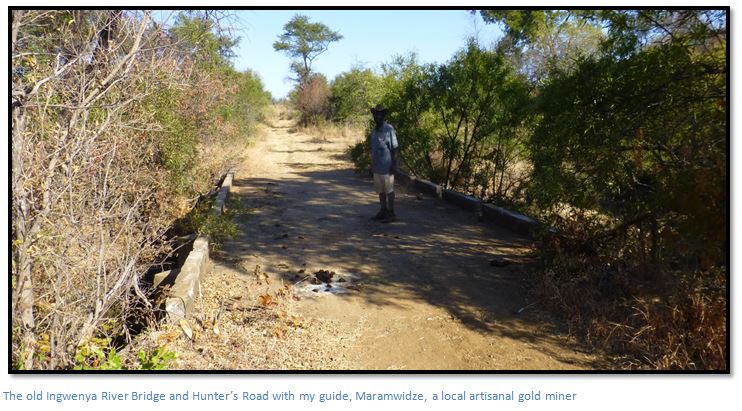 Nearby is the 1896 cemetery containing six graves and a wooden memorial which has probably been destroyed in veldt-fires. Two strong patrols of the 7th Hussars under Lieut-Col. Baden-Powell and Lieut-Col. Ridley had entered the Somabhula forest area in September, six months after the start of outbreak of the Matabele Rebellion or first Umvukela on 23rd March 1896 and recovered and buried the bodies of the men who had been killed at Harbord’s store close to where the Hunter’s Road crossed the Ingwenya River.  T. Nangle reveals that one of Gwelo’s oldest residents, Mr H.H. Gray, the Hussar’s Farrier Sergeant, was one of the burial detail. 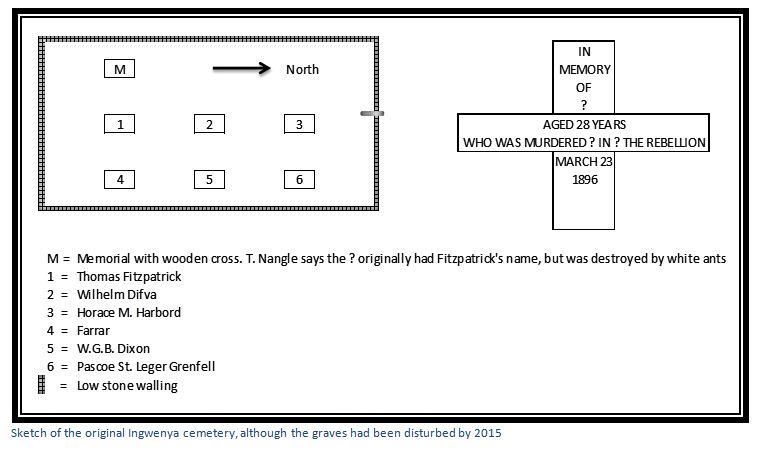 T. Nangle’s article includes a photograph from 50 years ago of the small cemetery which shows the six metal crosses in two rows of three and the stone memorial with its wooden cross behind them; all surrounded by a low wall of loose rocks. Nangle misstates Thomas Fitzpatrick as “Fitzgerald” and says the wood memorial was also in commemoration of Fitzpatrick; Nangle’s family lived nearby and he recalled the Fitzpatrick name which had been destroyed by white ants on later visits.

Harbord, Horace M., near Maven, end of March, whilst bringing supplies from Gwelo, the owner of the store on this site [3]

St. Leger Grenfell, Pascoe end of March, left Inyati on his way to Bubi. He was manager of a company [6]

The last two are named in the BSA Company Reports on the Native Disturbances in Rhodesia, 1896-7, but not in Appendix A of FC Selous’ Sunshine and Storm in Rhodesia.   The cement monument with wooden cross behind Fitzpatrick’s grave is now mostly destroyed.

The following are known to have been killed at or near Ingwenya Store;

Others killed in the area included:

Ireland, end March, killed on the road from Gwelo to Ingwenya.

It appears a mystery that they were not all buried at the Ingwenya Cemetery as their bodies were all recovered nearly six months after their deaths. 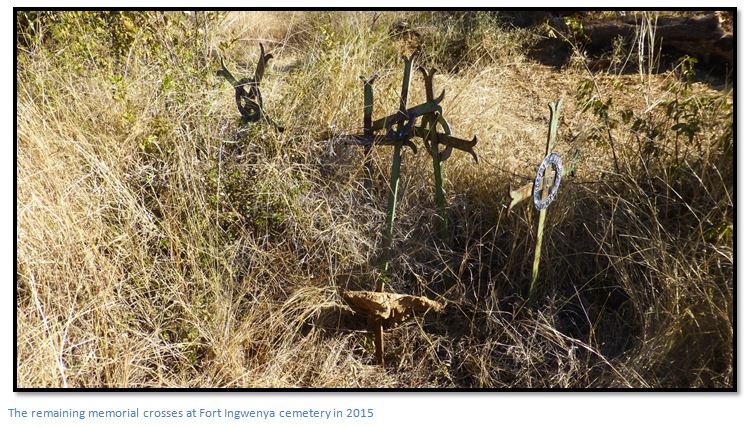 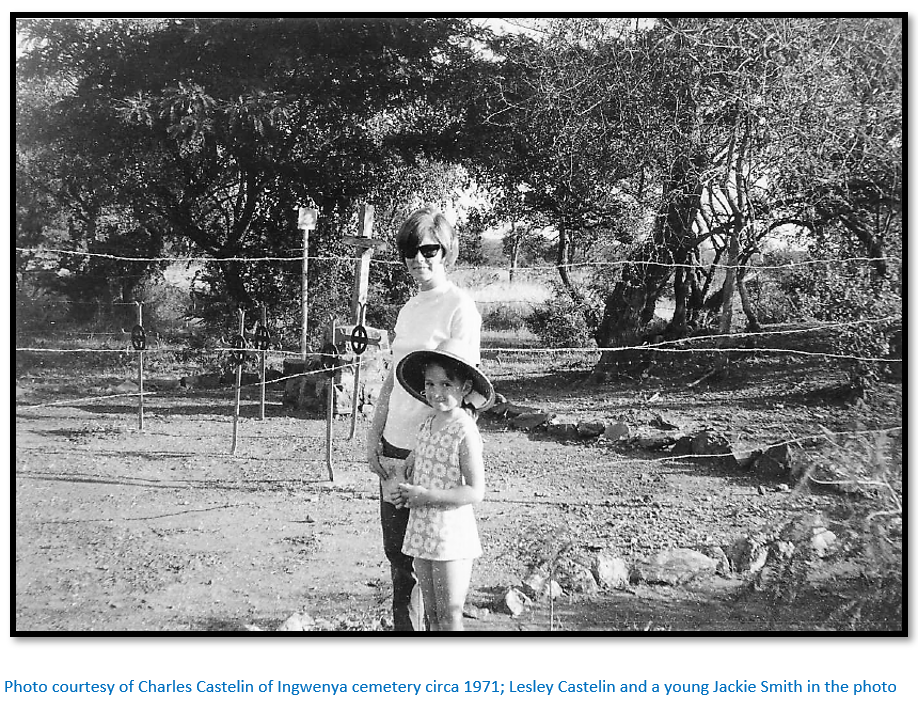 In his article T. Nangle recounts that the last survivor of the Gwelo laager, Mr Falk, told him that there was a large bottle dump near Harbord’s store and because of a shortage of glass bottles during WWI they were taken into Gwelo by the cart load.

Hubert Plumer reveals that Fitzpatrick’s theodolite and a buggy belonging to Pascoe St. Leger Grenfell were found in a cave near the West brothers’ store at the battle of Ntaba zika Mambo on the 5 July 1896.