National Monument No.:
98
Why Visit?:
How to get here:

Distances from Gweru junction of the A5 (Harare / Byo) and A17 to Mvuma. At 3.47 KM turn right at the roundabout for Mvuma, 4.55 KM pass Thornhill Air Base, 32.7 KM turn right onto an untarred road signposted Hozheri Primary School. The old farmhouse is being transformed into a school and classrooms were being constructed on the track when we visited. Continue through the school / farmstead turning left at the junction and heading south, 35.5 KM drive below a farm dam wall, 36.2 KM pass over the railway line and immediately turn left. The track runs parallel to the railway line in an easterly direction, 38 KM turn right away from the railway line (marked by an outcrop of granite on the left edge) onto another farm track which does a right-bend around a small farm, 38.6 KM turn left through an old gate, drive under the power line and continue straight on to Makalika Kop parking in the trees just 100 metres from Fort Gibbs.

From Mvuma take the A17 to Lalapanzi. Distances are from the Lalapanzi turnoff. 11 km turn left at the Hozheri Primary School signpost and continue as above. 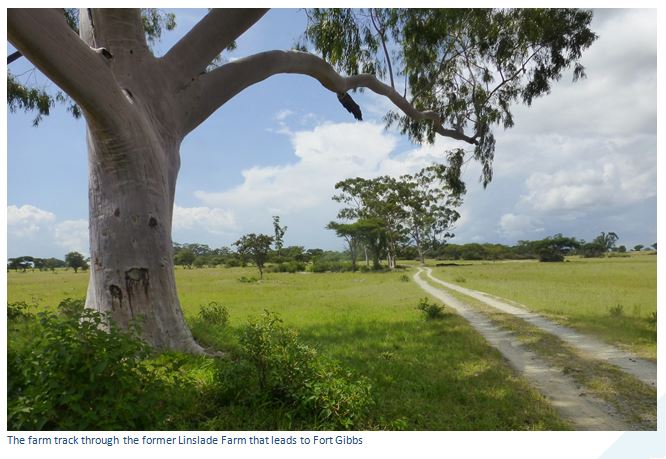 A summary of events leading up to the establishment of Fort Gibbs are described by Ian Tomes.  On 28 March 1896 Dan Judson led a party of nine horsemen from Gwelo and met up with Captain Gibbs and his party who had journeyed from Salisbury with a relief column. By next day they had linked up and the combined group were returning to Gwelo.

On 30th April, scouts of Colonel Beal’s relief force from Salisbury reached  a local store about 1.5 kilometres north of Makalika kop that had been looted and destroyed and then saw from Makalika kop an Ndebele Impi of about 500 warriors on a kopje a kilometre south west. This kopje with late Iron-Age Zimbabwe period walling and fortification was the likely source of stone for Fort Gibbs.  The Impi advanced to the base of Makalika kop and forced the scouts retreat before they were reinforced by some 40 mounted troopers of Beal’s force and drove the Matabele off. Colonel Beal’s forces moved onto Gwelo which they reached on 2nd May.

The fort was built under the command of Captain James Alec Charles Gibbs who left Gweru on 20th May 1896 with 6 officers, 60 NCO’s and troopers and 100 local tribesmen with work commencing two days later. The records state the outer wall was finished within four days and the inner firing platform took a further two days…this is an amazing feat of construction. Although Tomes says the workforce may have included stonemasons in civilian life, but both Cross and Burrett think it is much more likely that the stones were simply taken from the nearby Iron Age dry-stone walling structure and this seems the only reasonable explanation of how they managed to build Fort Gibbs so rapidly with such well-dressed and fitted stones.

The fort is rectangular in shape; the shorter north and south sides are 15 metres (50 feet) the longer sides on the east and west are 20 metres (64 feet) and are strongly constructed of trimmed granite blocks, the lower ones of considerable size.  The entrance is in the eastern wall, about 1.4 metres wide (4.5 feet) with a protective shield wall set outside the main fort with steep narrow steps at the back making it also a lookout point. The inscription on the shield wall reads: FORT GIBBS 1896 and was carved by Trooper Nicholson and originally was topped off with a flag pole.

The height of the walls is about 1.8 metres (6 feet) and a firing platform runs along the inside of all the walls which is about 1.0 metre high with the top covered in a layer of dhaka. A drain runs out of the west wall about 2 metres from the northwest corner. There were two huts within the fort itself, the northern one built of burnt bricks with corrugated iron roof was a store for ammunition, food, clothing and horse tack; the southern one made entirely of corrugated iron, or pole and dhaka with a corrugated iron roof to be used as sleeping quarters in the event of a siege. The interior of Fort Gibbs is sandy and a shallow depression marks the spot where the northern store once stood.

To the south is a steep drop to the Tebekwe River about three kilometres away and to the east are the hills which are the source of this river. On the west is a small spruit from which the fort probably drew its water. The country to the north and east is flatter than the south and west with its extensive views. To the north the fort overlooked the ox-wagon route linking Gweru to Fort Charter and the telegraph line passed to the northwest of the fort connecting Gweru with Charter and Harare and was connected to the fort by the 5th June 1896 with a separate telegraph hut to house the teleprinter machine. The flag was ceremoniously hoisted at 7am on the 14th June 1896. 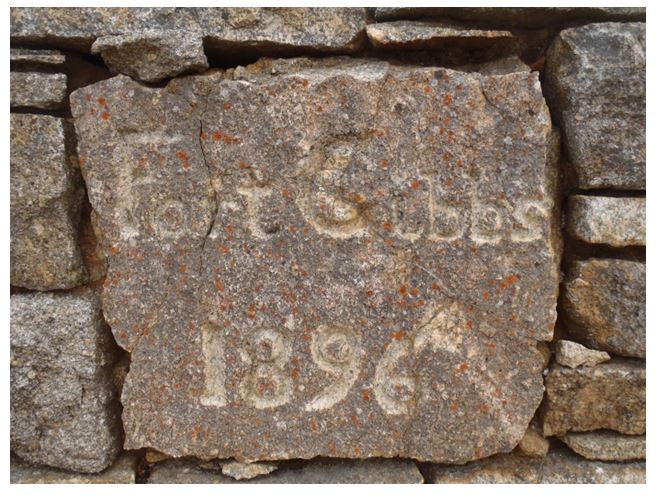 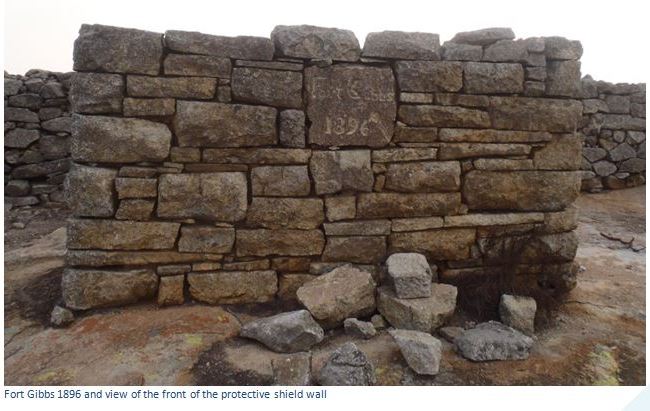 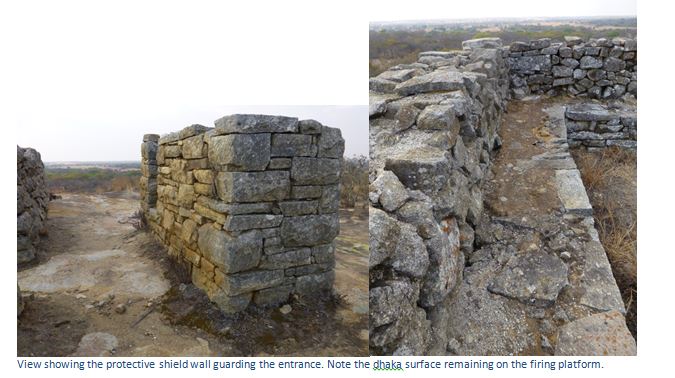 A cattle kraal was built at the base of the kopje to the east and pole and dhaka huts for the telegraph hut officers’ mess and hospital hut built just outside the eastern entrance as in Burrett’s sketch below. The foundation remains of the three huts can be seen outside the eastern wall, one opposite the north-eastern corner and two opposite the south-eastern corner. European troopers camped to the south and African troopers to the west of the fort.

Captain JAC Gibbs, a regular in the West Riding regiment, had been seconded as an Adjutant to the Rhodesian Horse. He left the garrison at Fort Gibbs on 25th June 1896 and went onto Shangani before returning to Harare in November 1896 and rejoining his regiment in England in 1897.

Peter Garlake points out that corner bastions were only introduced from 1896 on forts, normally at two diagonally opposite corners, so that heavier weapons such as the Maxim machine gun, or a seven pounder could be deployed. 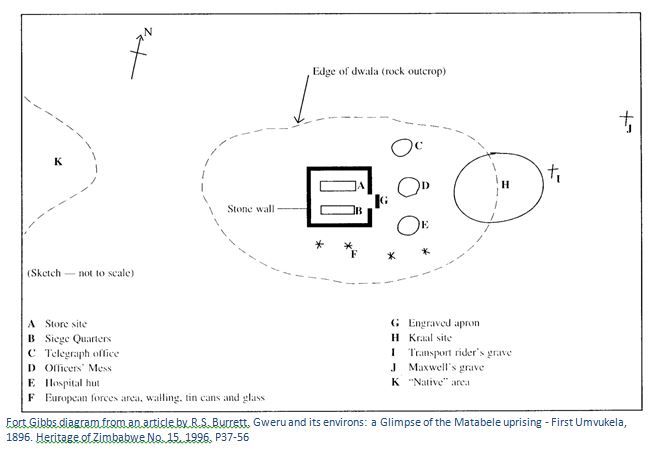 After Captain Gibbs' departure, Major Thorold was in charge with 60 men. The fort never saw action, except for a skirmish on the 6th June 1896 when one of the scouts shot at three Matabele. In October 1896 the fort was taken over by the BSA Police before finally being abandoned at the end of 1897.

Souvenir No. 7 says two members of the garrison are known to have died. Sgt. William Maxwell of the BSAP who died of fever on either the 16th or 20th June 1897 and was “found dead in the veld” is buried 500 metres to the east of the fort as indicated on Tomes sketch plan below. His grave marker gives the date of death as 20th June, although BSAP records indicate it was the 16th June.  Another grave of a transport rider between Maxwell’s grave and the fort is indicated on Rob Burrett’s map, although on a second visit in early 2016, I could not locate the site. However, there is an unmarked grave just 80 metres south west of Fort Gibbs as can be seen in the top photo above, and this may be the transport rider’s grave. 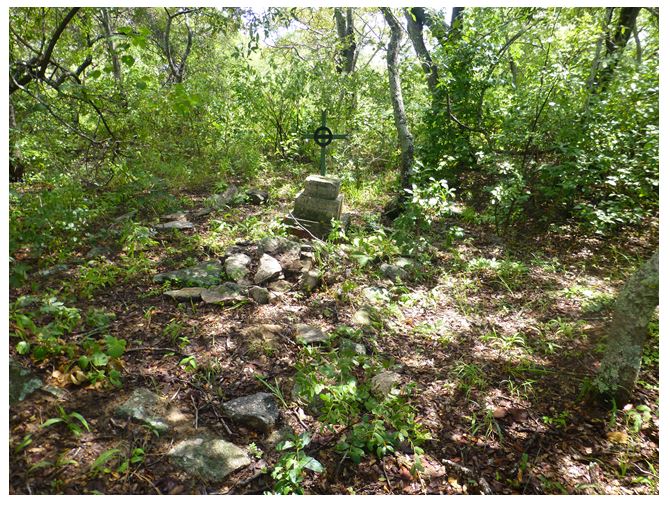 The inscription on Sgt. Maxwell’s grave reads: Sacred to the memory of Serg. William Maxwell BSAP who died at Fort Gibbs on the 20th June 1897. 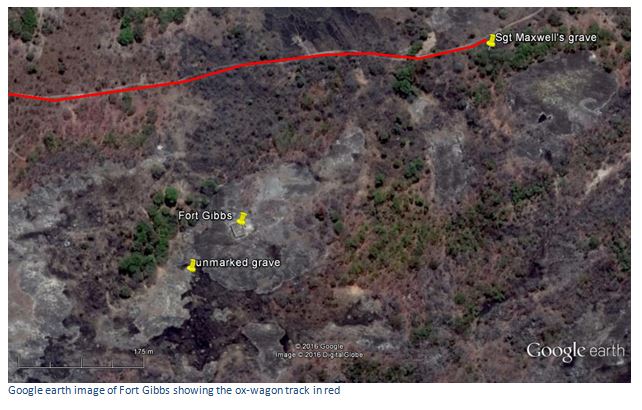 Souvenir (No. 10) of an outing to the Midlands area by members of the History Society of Zimbabwe 25-26th September 1993