In Singapore sellers of elephant ivory or ivory products or anyone who puts them on public display for the purpose of sale may be charged under the Endangered Species (Import and Export) Act and fined $10,000 per item up to a maximum of $100,000 or jailed for up to 12 months, or both.

Each year, at least 20,000 African elephants are illegally killed for their ivory. The last ten years saw a big rise in demand for elephant ivory, the Asia-China region particularly has been behind the rise in the illegal wildlife trade  poaching epidemic.

African elephant habitat has declined by over 50% since 1979 and Asian elephants are now restricted to just 15% of their original range. Add in growing human-wildlife conflict and the surge in ivory poaching in recent years and it's easy to see why elephants are under threat. Not only is the very survival of this iconic species threatened, but also the lives and livelihoods of local people who rely on tourism. 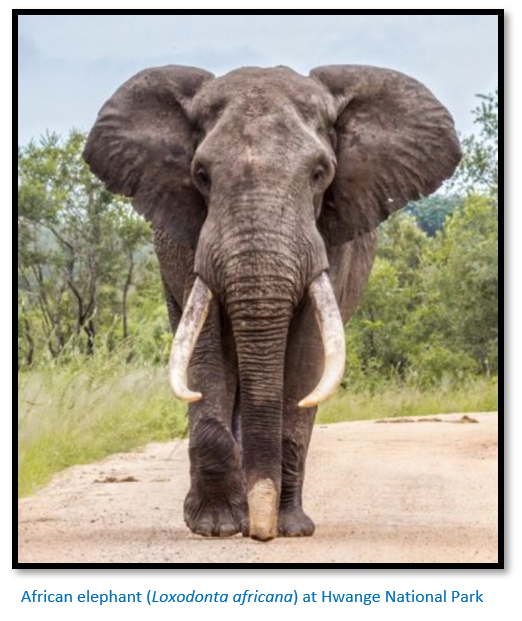 International reaction to the threat to elephants

The United States applied a near-total ban on the elephant ivory trade in 2016 along with the United Kingdom. Most notably, China at the end of 2017 also took the hugely significant step of banning the elephant ivory trade – this was an historic milestone in the effort to save the elephants. The same year Hong Kong announced it would completely phase out the domestic ivory trade by 2021 giving traders a five-year grace period to sell off their remaining ivory. In 2019 Singapore gave its traders two years to sell off their remaining ivory stocks and now the ban has come into force.

Cambodia, Japan, Laos, Myanmar, Thailand and Vietnam still have elephant ivory for sale on the shelves and despite the fact that it’s unlawful to transport ivory out of one country into another without special permits, travellers still risk it.[i]

In the past social media and e-commerce platforms such as Facebook and Carousell have hosted online trading in ivory products and this still remains the case, although numbers have greatly reduced. The authorities are working with online platforms to ensure that all ivory listings are removed, while online sites such as Facebook and Carousell state they are committed to having ivory content, advertisements and listings removed.

A Facebook spokesman said: “it prohibits content and advertisements attempting to trade, sell or purchase wildlife and products or parts from endangered or threatened animals” though they did not elaborate on how this is carried out.

A spokesman for Carousell said it uses techniques such as artificial intelligence to detect these prohibited items accurately, including product listings where their details may not be explicitly stated.

Dr Adrian Loo, Group Director of Wildlife Management at the Singapore National Parks Board (NParks), told The Straits Times that his staff have been working closely with e-commerce platforms, including Carousell, to remove any postings or listings that display any ivory product, or the likeness of it. 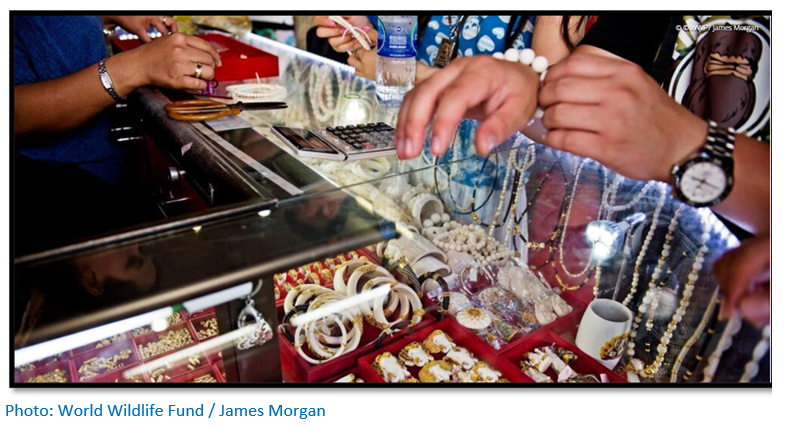 Sellers in Singapore were given a two-year grace period to ensure that they could comply and clear the stocks they possess. However, there was confusion when ivory products were mislabelled or claimed to be old stock, so the blanket ban now is clearer.

Singapore has science to back up the ban

Singapore will use new technology and genetic sequencing tools to identify ivory products.

For instance, ivory products that have been processed and may not have identifiable physical characteristics, such as bird cages, will be taken to NParks’ Centre for Wildlife Forensics for DNA analysis.

Dr Loo said: “If these items are confirmed to be elephant ivory or ivory products, they will be destroyed to prevent them from re-entering the market.”

Singapore is determined to crack down on the illegal wildlife trade

What is the current status on ivory products?

In the wake of the Chinese ban, World Wildlife Fund (WWF) conducted annual surveys of Chinese consumers and found a promising decline in elephant ivory buying. Nearly 80 percent of respondents said they supported the ban. And beyond the survey, the WWF tracked black market activity and found that wholesale prices of ivory in China have actually dropped. Unfortunately, they also found that one consumer group has actually increased its interest in buying ivory: people who regularly travel outside mainland China to countries such as Cambodia, Japan, Laos, Thailand and Vietnam.[ii] 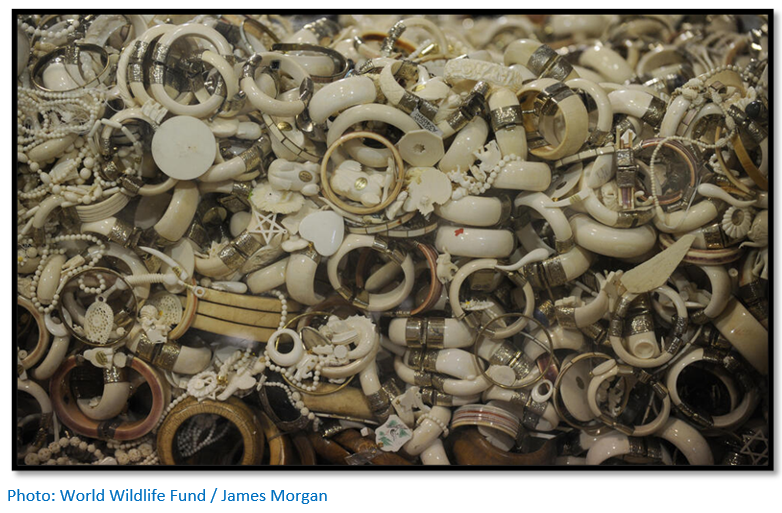 The effort will rely on engaging with Chinese travellers from the time they are researching trips online to when they are actually walking around known ivory markets in Southeast Asia. The WWF will use the same tools that commercial brands have perfected to influence consumers, like precision marketing through social media. For example, during Lunar New Year or Golden Week in October - the two biggest travel periods in China - anyone with a Chinese smartphone visiting Thailand or Vietnam will receive messages from WWF to avoid buying elephant ivory and look for alternative souvenirs. Airlines flying from China to these countries are making in-flight announcements urging passengers to travel ivory-free. This is how they hope to change consumer behaviour.[iii]

Who are the targets of this campaign to discourage buying of ivory products?

As more and more Chinese travel internationally - before COVID-19 nearly 200 million Chinese tourists travelled abroad each year—elephant ivory smuggling had been on the rise. The WWF believes that access to elephant ivory outside China could seriously undermine the effectiveness of their ivory ban. The most effective way would be to close the markets that sell elephant ivory and largely exist to serve Chinese nationals – they are in Cambodia, Japan, Laos, Myanmar, Thailand and Vietnam —closing them would slow elephant ivory trafficking.

The fourth annual consumer survey by GlobeScan, WWF’s research organisation, of the elephant ivory trade in China shows that since 2017 when the domestic trade was banned demand for ivory products has decreased from 43% to 18%, so today it is less than half of pre-ban levels.[iv] 88% percent of those surveyed believed the sale of ivory is illegal and the survey found that wholesale prices of ivory in China have fallen. Karen Xue, Global Director for WWF’s Ivory High Impact Initiative said: “This research is another encouraging sign that China’s elephant ivory trade ban is being implemented and enforced effectively.”

A group of 8% of diehard buyers would buy ivory because of its perceived artistic value and this was the group most likely to travel and purchase ivory in those Asian markets listed above. 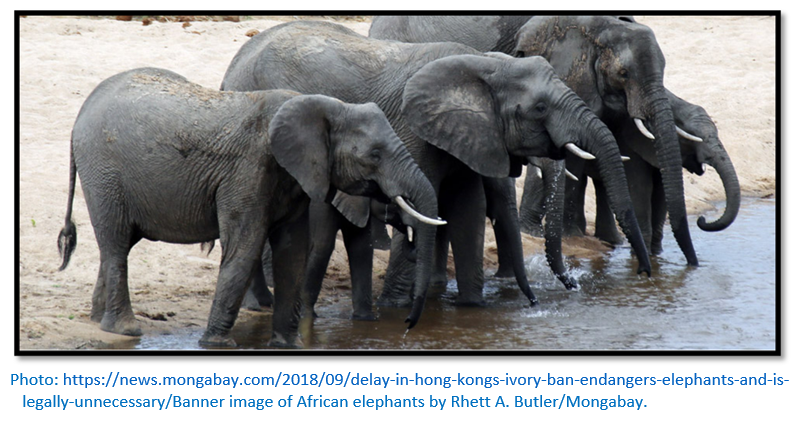 Zhou Fei, Chief Program Officer of WWF China said: “Chinese consumers have been one of the major drivers to the global ivory trade dynamics that contribute to an elephant poaching crisis across the African continent beginning around 2010, other drivers include loss of habitat and corruption in Africa and weak law enforcement in transit countries especially South East Asia. The Chinese ivory ban is a game-changer that helps in turning the tide against the illegal ivory trade that claims thousands of elephants each year. Partners across many sectors, including China Customs, internet companies and the travel industry, have committed to a Zero Tolerance to Illegal Wildlife Trade Initiative and therefore bolstered consumer engagement efforts.”[v]

A targeted social media campaign in 2020 starring Chinese cultural celebrity Ma Weidu was seen by 22 million people and received the highest recognition among diehard buyers and regular overseas travellers. The information it contained on the ivory ban and the campaign video changing the attitudes of 74% of those who had reported that they wanted to purchase ivory in the future. 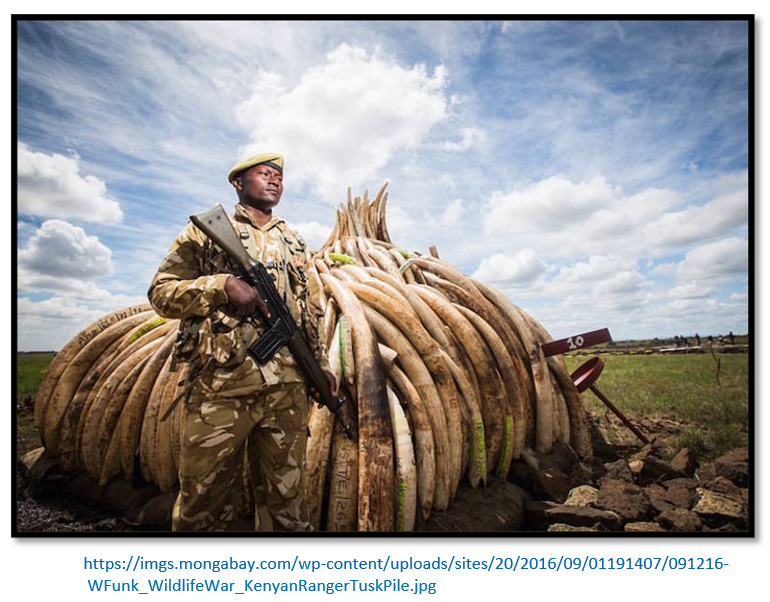 A Kenya Wildlife Service ranger guards seized elephant ivory and rhino horn that is about to be destroyed.

By Cheryl Tan and Syarafana Shafeeq, Straits Times. 16 September 2021.  Online platforms roped in to fight against sale of ivory products as Singapore domestic ban kicks in. Reprinted on https://africanelephantjournal.com