From the junction of the A6 / A4 at Beitbridge take the A6 Beit Bridge to Bulawayo road for 5.3 KM and turn left at sign which reads HA-BANGALA. At 11.3 KM cross the Bertie Knott Bridge over the Umzingwane River and immediately after turn right, 18.2 KM continue left at the junction and sign Nottingham Estate, 23.7 KM pass the Kuduland turnoff on the left (the sign is missing) 28.9 KM pass the Fishing Camp sign on the right. 38.1 KM keep right at the junction, 31.2 KM pass the ECM disused coal mine on the right, 42.2 KM pass the fly camp turnoff on the right, reach citrus fields. Signposts at the Sentinel Nottingham grid are “GREATER MAPUNGUBWE TRANSFRONTIER CONSERVATION AREA” on the left and “SENTINEL LIMPOPO SAFARIS” on right.

57.2 KM reach guarded entrance to Sentinel Ranch on the left. For the dinosaur fossils you need to get to the Border Ridge homestead, a separate property from Sentinel, but surrounded on 3 sides by the latter. From the Sentinel grid, proceed over drift, past Sentinel Homestead gates on left, past store (on left) and over cement bridge and ±1.5km further turn left through gate marked “No Border Jumpers!”.  Proceed 4km to the Border Ridge homestead. The fossil site is NW of the homestead.

No visitors without an appointment, personal tours are $10 per person.  Visitors can book dinosaur visits with Vanessa or Digby at +27 83 285 0064 or by email: dbristow@limpopo.co.za.

According to Wikipedia Massospondylus( (mas-oh-spon-di-las); from Greek massōn, "longer" and spondylos, "vertebra” is a genus of sauropod dinosaur from the Early Jurassic Period about 183 - 200 million years ago. It was described by Sir Richard Owen in 1854 from remains discovered in South Africa and was one of the first dinosaurs to be named. Other specimens have since been found at other locations in South Africa, Lesotho and Zimbabwe with other remains from Arizona, Argentina and India; but the Arizonan and Argentinian material are now assigned to other genera.

The type species is M. carinatus; seven other species have been named in the past, but numerous revisions have taken place and scientists seem to disagree presently where exactly Massospondylus lies on the dinosaur evolutionary tree.

Massospondylus was long depicted as quadripedal, but a 2007 study found it to be bipedal. It was probably a plant eater (herbivore) and was 4–6 metres (13–20 ft.) long, weighing approximately 1,000 kilograms (2,200 lb) with a slender body, a long neck and tail and a proportionally very small head. It had five digits on each hand and foot and the hand was short and wide, with a large sickle shaped thumb claw (pollex) used for feeding or defence against predators. The thumb was the longest finger in the hand, while the fourth and fifth digits were tiny, giving the forepaws a lopsided look. It may have used its large thumb claw in combat, to strip plant material from trees, for digging, or for grooming. Recent studies indicate that Massospondylus grew steadily throughout its lifespan, possessed air sacs similar to those of birds, and may have cared for its young.

The original fossil material, a collection of 56 bones, was found in 1853 by a surveyor, Joseph Millard Orpen, in the Upper Elliot Formation at Harrismith, South Africa and was donated to the Hunterian museum at the Royal College of Surgeons in London. Richard Owen did not recognize these finds as those of a dinosaur; instead he attributed them to "large, extinct, carnivorous reptiles" that were related to today's lizards, chameleons and iguanas. Owen identified different types of caudal vertebrae, which he attributed to three different genera: but later studies showed all the material belongs only to a single species.

Other possible Massospondylus remains have been found in the Upper Elliot Formation of the Cape, the Clarens Formation, the Bushveld Sandstone of South Africa and Lesotho and the Forest Sandstone and the Upper Karroo Sandstone of Zimbabwe. These remains consist of at least 80 partial skeletons and four skulls, representing both juveniles and adults. M.R. Cooper published The First Record of the Prosauropod Dinosaur Euskelosaurus from Zimbabwe in Arnoldia, a series of miscellaneous publications by the National Museums and Monuments in Volume 9, No 3. 15th October 1980.

The article goes on to say that the Mpandi Formation consist of red silty clay stones and siltstones that preserve silicified root casts, small carbonate nodules and hematite-coated prosauropod bones which occur in isolated exposures along the banks of the Limpopo River and accumulated on an ancient semi-arid Floodplain. Widespread exposures occur on Sentinel Ranch with a particularly interesting site which has a nearly complete and articulated Massospondylus specimen. 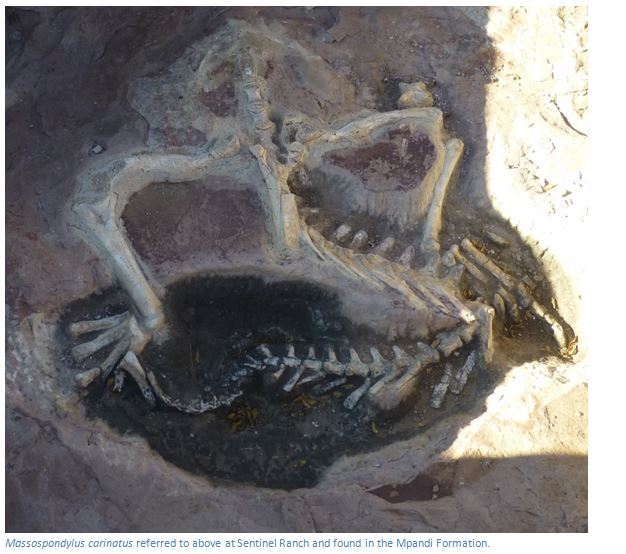 Other part specimens of Massospondylus have been found and recorded in the immediate area, but the one above is the most complete specimen found and excavated so far. The rear half of this individual is shown in the photo with it resting on its back with intact hind limbs splayed symmetrically to each side. The article by R.R. Rogers et al states there is a possibility that the front half of the skeleton is preserved and awaits excavation. This skeleton was first described by Darlington Munyikwa in 1997 of the National Museum of Natural History in Bulawayo. It is encased in light red fine-grained sandstone with the bones appearing a light grey colour and they are surrounded by a darker grey halo that varies from <1 to 10 centimetres in thickness which may have resulted from decay of the soft tissues, or some later chemical or physical change in the sediments during their conversion to rock (diagenetic effect)

The faunas and floras of the Early Jurassic were similar worldwide, with conifers adapted for hot weather becoming the common plants and the environment of southern Africa described as a semi-arid desert. It is not clear which carnivores may have preyed on Massospondylus. Most of the theropods that have been discovered in rocks of Early Jurassic age in southern Africa were smaller than mid-sized Massospondylus. These smaller predators may have used fast slashing attacks to wear down sauropods which could have defended themselves with their large hand and foot claws. The 6-metre (20 ft.) long carnivorous theropod Dracovenator lived during the same period and has also been found in the Elliot Formation of South Africa.

All recent studies favour an herbivorous or omnivorous lifestyle for these animals. Gastroliths (gizzard stones) have been found in association with three Massospondylus fossils from the Forest Sandstone in Zimbabwe and scientists believed that these stones functioned as a gastric mill to aid ingestion of plant material, compensating for its inability to chew, as it is the case in many modern birds, although recent studies do claim they may not have functioned as a gastric mill in most non- theropod dinosaurs, including Massospondylus. Among living vertebrates, gastroliths are common amongst crocodiles, alligators, herbivorous birds, ostriches, seals and sea lions.  Domestic fowl require access to grit.

Although long assumed to have been quadripedal; a 2007 anatomical study of the forelimbs questioned this as they have a very limited range of motion and could not swing the forelimbs fore and behind in a fashion similar to the hindlimbs; nor could the hand be rotated with the palmar surfaces facing downwards. This is supported by in-situ finds of articulated (still-connected) arms that always show unrotated hands with palmar faces facing each other. Although its mass suggests a quadripedal nature, Massospondylus would have been restricted to its hind legs for locomotion.

In 1976, a clutch of seven 190-million-year-old Massospondylus eggs was found in golden Gate Highlands National Park in South Africa by James Kitching. It was nearly 30 years before extraction was started on the fossils of the 15 centimetre (6 in) long embryos and they remain the oldest dinosaur embryos ever found. By early 2012, at least 10 egg clutches from at least four fossiliferous horizons had been found, with up to 34 eggs per clutch. This indicates that this nesting site may have been used repeatedly by groups of animals; these represent the oldest evidence of this behaviour. Sedimentary structures indicate that the nesting area was in the vicinity of a lake. The eggshells were very thin (about 0.1 mm), allowing gas exchange even in a low oxygen and carbon dioxide rich environment indicating that the eggs were at least partly buried.  There are no hints that Massospondylus constructed nests; however, the arrangement of the eggs in tight rows indicates that the eggs were pushed in this position by the adults.

The embryos probably represented near-hatchlings. While the skeletal features were similar to those of the adults, the body proportions were very dissimilar. The head was big with a short snout and very large orbits, whose diameter amounts 39 % of the entire skull length. The neck was short, contrasting to the very long neck in the adults. The forelimbs were of equal length to the hindlimbs, indicating that newly hatched Massospondylus were quadripedal, unlike the bipedal adults; the discovery of hatching footprints with manus impressions confirmed this feature. Notably, the near-hatchings had no teeth, suggesting they had no way of feeding themselves and scientists have speculated that postnatal care might have been necessary. This is further supported by evidence that the hatchings remained at the nest sites until they had doubled in size.

When to visit:
Open Monday to Saturday 0800 – 1700, but an appointment is necessary
Fee:
An entrance fee is chargeable
Category:
Geological
Historic
Province:
Matabeleland South