National Monument No.:
33
Why Visit?:
How to get here:

From Bulawayo: take the A5 towards Gweru, pass Shangani,  0.9 KM before crossing the Shangani River bridge turn right onto the old single tar road leading down to the low level bridge. The Pongo Memorial is on the left about 200 metres from the tar road.

From the Zimbabwe Military museum in Gweru take the A5 towards Bulawayo, 56 KM pass the Shangani River bridge, 56.9 KM turn left at the top of the rise onto the old single tar road leading down to the low level bridge, 57.1 KM Pongo Memorial is on the left about 200 metres from the tar road.

The Memorial is situated to the west of the Shangani River Bridge and it’s a mystery why it is called the Pongo Memorial, as the Pongo River is sited about 15 kilometres to the west.  However, a number of the victims were killed at the Pongo store on the river, and this probably accounts for the name.  The Memorial is certainly neglected and overgrown and has to be searched for before it is found. This is part of the graphic account in FC Selous’ Sunshine and Storm describing the scene when Earl Grey, who had replaced Dr Jameson as the Administrator of the BSA Company, arrived at the Pongo store.

“On reaching the Pongo store some twelve miles from the Tchangani (Shangani) river, Grey had found all the outhouses just burnt. The store itself seemed to have been looted, but was not at this time burnt down. No trace of the owners could be found, but the ground was thickly covered with the naked footprints of natives, and, more ominous still, a large pool of blood was seen in the road in front of the store. We now know that at this time the recently-murdered corpses of three white men were lying, two of them close to the store, and the third on the top of a rise a short distance away. I was present some six weeks later when the bodies were discovered and buried. The unfortunate men must have been suddenly attacked with knob-kerries and axes, as their skulls had all been smashed in. In this instance the clothes were not removed from the bodies “. 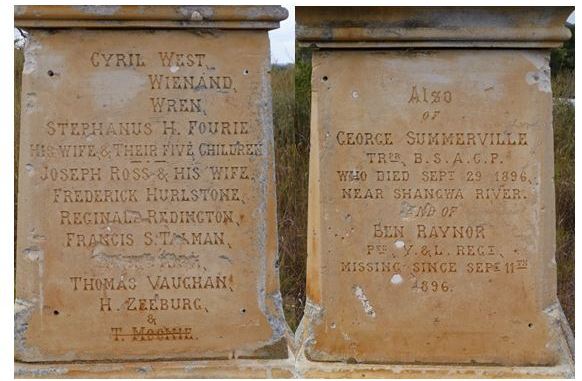 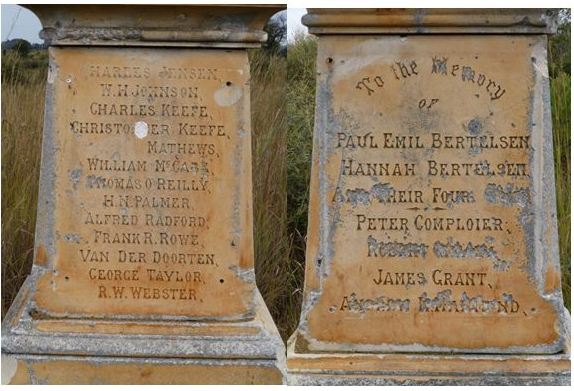 Another memorial within the fenced area was to Caesar Barrand Hull DFC.

After some research, the mystery of this missing plaque next to the Pongo Memorial was unravelled.  It had been erected before the end of World War II and reads:

�WE HONOUR THE BRAVE�

Caesar Hull was born in Shangani and educated at St. Johns College, Johannesburg. Flying was his passion like many others of his generation. He travelled to England in 1935 and completed his flying course before being posted to 43 (F) Squadron at Tangmere for flying duties. Much more detail of his fascinating life is contained on the ORAF website. The squadron was renowned for its aerobatics shows with the most notable display being at Hendon on the coronation of King George VI in 1937 in front of 250,000 people in which Caesar Hull won the individual aerobatics event.

By 1938 the squadron with its Hawker Furies was preparing for war with Germany, but it was realized the Furies were no match for the Luftwaffe and by 1939 they were replaced by Hawker Hurricanes. The German attack on Poland resulted in a British ultimatum and war was declared on 3rd September 1939. The squadron was posted to Acklington, near Newcastle to protect the coastal convoys from enemy attack. Caesar Hull shot down a Heinkel (He 111) bomber on 3rd February, 43 Squadron’s first “kill”.

In May, Caesar was transferred to 263 Squadron as Flight Commander.  They were equipped with Gladiators, an obsolete biplane fighter and destined for Norway on the aircraft carrier HMS Furious. On 24 May, Hull in a joint operation shot down a He 111. On 26 May, he shot down another He 111 and on the same flight, shot down a Junkers (JU 52) transport, followed by two more Ju 52’s and damaging a He 111. In one afternoon, in an obsolete aeroplane, he destroyed four enemy aircraft and seriously damaged another. On 27 May, he shot down a Junkers 87 Stuka, but his Gladiator was attacked and damaged by a ME 110 and crashed, with Caesar being wounded in the head and knee. He was evacuated back to the UK from Norway where he was awarded the Distinguished Flying Cross.

Caesar recovered and was posted to 43 Squadron at Tangmere in August, back onto Hurricanes. He was promoted to CO, when the previous CO was killed in action. There was no one better suited to revive morale. On the 4 September, 43 Squadron shot down eight ME 110’s against one Hurricane damaged, and Caesar had two more kills.

On 7 September, a massive raid comprising 350 bombers and 600 plus fighters headed straight for London. 43 Squadron led by Caesar Hull flew directly towards the massed formations. In the resulting confused melee, it was reported that Caesar shot down two Dornier 17’s and used all his ammunition before being shot down and killed. He had been killed by a bullet during the battle over the London Docks and was found dead beside his Hurricane in the grounds of a boy’s school in Purley, Kent. He was buried at St. Andrews Churchyard at Tangmere.

After his death, the citizens of Shangani clubbed together and erected the memorial in his honour.

Many years later the new road was built with the old road by-passed and the monument became less accssible, overgrown, and forgotten about. Most metal plaques in Zimbabwe during this time were being stolen and sold for scrap, so the Hull Family decided to retrieve the metal plaque and donate it to the Tangmere Aviation Museum. The plaque was so well embedded that they had to resort to using a 14lb hammer to remove it, which accounts for the shattered state of the granite plinth. The plaque was finally delivered and handed over by his sister to Tangmere Aviation Museum, the war-time aerodrome from which Caesar Hull flew, on Saturday 17 April 2004. 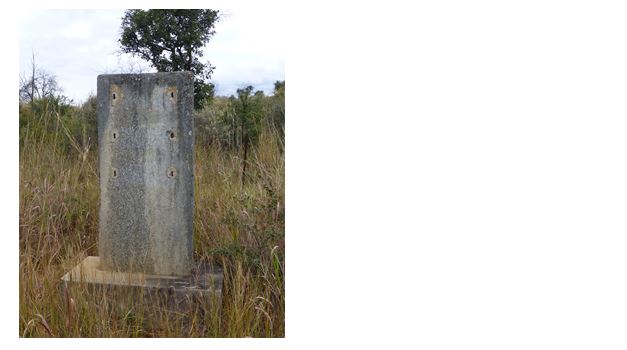 F.C. Selous. Sunshine and storm in Rhodesia; being a narrative of events in Matabeleland both before and during the recent native insurrection up to the date of the disbandment of the Bulawayo field force. Rowland Ward & Co. 1896