National Monument No.:
8
Why Visit?:
How to get here:

From the National Park Reception head towards Maleme Dam, 1.7 KM turn left at the junction facing the Dam and cross the wall, 3.7 KM reach road junction and turn right to go north. The signpost says 7 km but it is better to stop at 1.6 KM where the signpost on the left indicates Nswatugi Cave and take the path rather than driving the long way around to the Site Museum. The climb is quite short and easy along a well-marked path marked on the granite with green arrows.

The name Nswatugi means “the place of jumping” as it is believed that Mwari / Mwali (God) jumped from his home at Njelele Mountain over the top of Nswatugi Hill and landing on Khalanyoni Hill.

Nswatugi Cave opens at the end of a steep gully, the entrance is only six metres across, but the cave extends fourteen metres into the hill and contains beautiful friezes of giraffes, elephants and kudu in a wide range of colours. Two large shaded polychrome giraffe dominate the frieze with below a camp scene of figures asleep in their karosses. Below are six large kudu and a mass of figures including a zebra, crouched humans with others carrying weapons and lines of running hunters. On the right side of the frieze there is another polychrome giraffe and a group of zebra. Below the main frieze are a number of ovoids in ochre and red with stippling and white caps. On the extreme right of the panel are outlines of a zebra and the head of a kudu cow and on the far left are two superb antelope. Further back in a recess are two ovoids, or formlings and a feline. At the front of the cave are a faded giraffe outline, four antelope and a sable head. 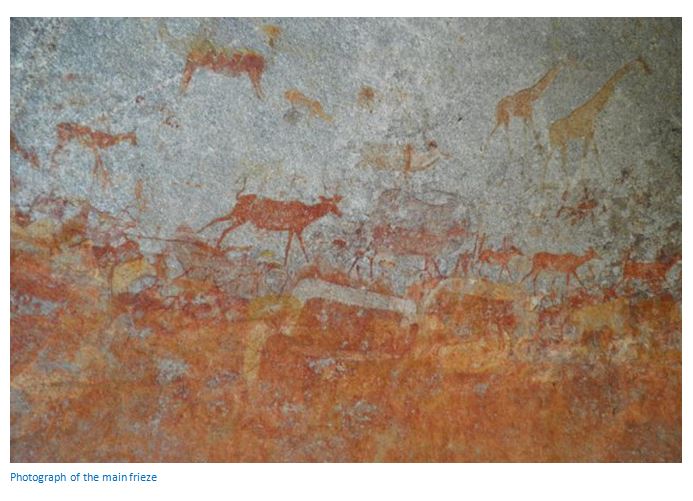 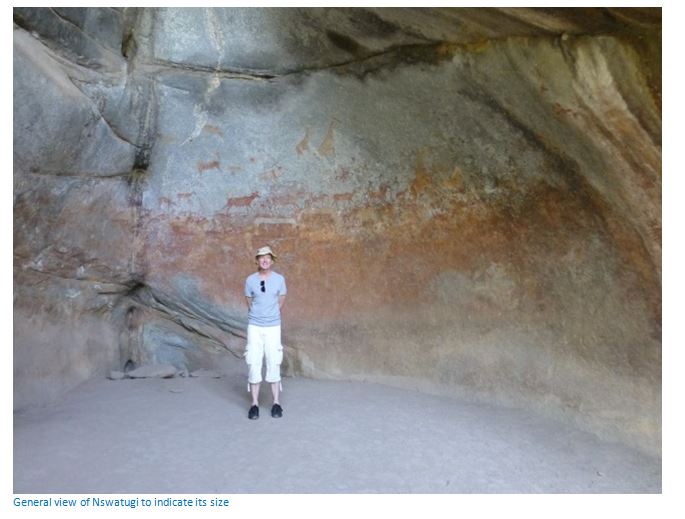 On the floor of the cave once stood a clay granary where the Matabele stored grain during the First Chimurenga of 1896 which has since fallen to pieces. The cave was first visited by Neville Jones and the first excavation was carried out in 1933 by Cran Cooke with another 1975 excavation led by Nick Walker. The upper layers revealed Iron Age remains of pottery, ironwork and glass beads and below were revealed Middle and Late Stone Age scrapers and points and a number of other implements of fine workmanship which became the type site for Wilton implements. A human skeleton found in the Middle Stone Age levels is probably the oldest human remains found in Zimbabwe.

The painters were the hunter –gatherer ancestors of the modern day San people in Botswana who were forced to retreat to the more marginal lands of north western Botswana and the Kalahari with the arrival of pastoral farmers bringing with them sheep and goats and later cattle.