National Monument No.:
39
Why Visit?:

Mzilikazi is today acclaimed by many as the father of the amaNdebele nation and the greatest leader this country has ever had.

While his journey had begun with a few hundred followers, under Mzilikazi's leadership the tribe’s numbers had risen to, at their peak, some 20,000 people as conquered peoples were absorbed into the amaNdebele nation.

Mzilikazi's greatest success was infusing his diverse population with a sense of common nationhood, one shared by the amaNdebele community today.

The Memorial is on the site of Mzilikazi's royal town of Mhlahlandleia after he left Inyati and was unveiled on 18th June 1941. It stood in the shade of the indaba tree under which Mzilikazi had sat in council and has the inscription: “Mzilikazi, son of Shobana, the Matabele hail you. The Mountain fell down on 5 September 1868. All nations acclaim the son of Shobana. Hayete.” 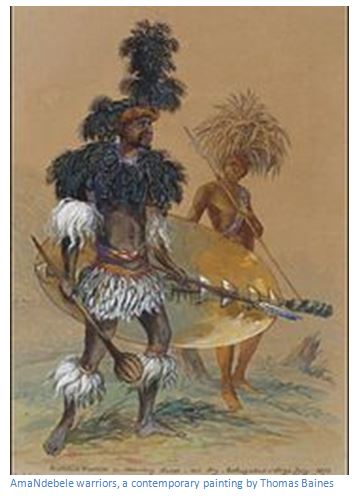 Mzilikazi was born in what is now northern Zululand, South Africa, sometime in the 1790’s. He was the son of Mashobane, chief of a Khumalo subgroup; his name means “path of blood,” and his early military career was spent commanding a Khumalo regiment for the famous Zulu ruler Tshaka. In about 1820 members of the Khumalo clan, under the leadership of Zwangendaba, left Zululand and settled in Swaziland. Two years later, in 1822, Mzilikazi, another of the Khumalo clan, rebelled against Tshaka's authority, and although Tshaka sent two army contingents after him, they failed to stop Mzilikazi with his followers crossing the Drakensburg Mountains.

They followed Zwangendaba into Swaziland, but the country was too small for both of them and Zwangendaba travelled northwards through modern Mashonaland crushing the Karanga people in his path and about 1835 crossing the Zambezi into northern Malawi and the Lake Tanganyika region. Others under Shosangane later known as the Shangaans settled in Zimbabwe’s south east and Gaza province in Mozambique; the rest, following Zwangendaba, travelled to the north-west where in 1834 they overcame the Rozvi at a battle on the Inkwinkwisi River, near Inyati. Some stayed and were later incorporated in the amaNdebele nation; the remainder went northward and settled in Malawi and Tanzania. 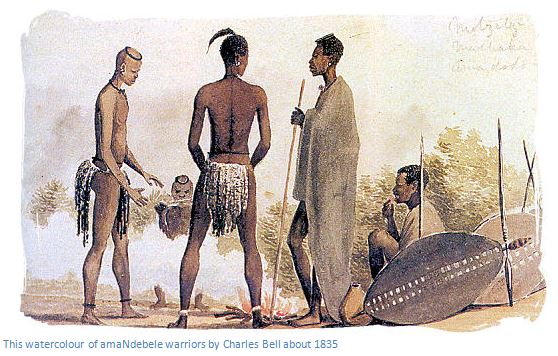 Mzilikazi, initially with about 500 foot soldiers moved first across the Vaal River into what is now the northern part of South Africa into an area above the Magaliesberg mountain range, near modern Pretoria. Here Mzilikazi with his followers founded a settlement called Mhlahlandleia on the Aapies River. 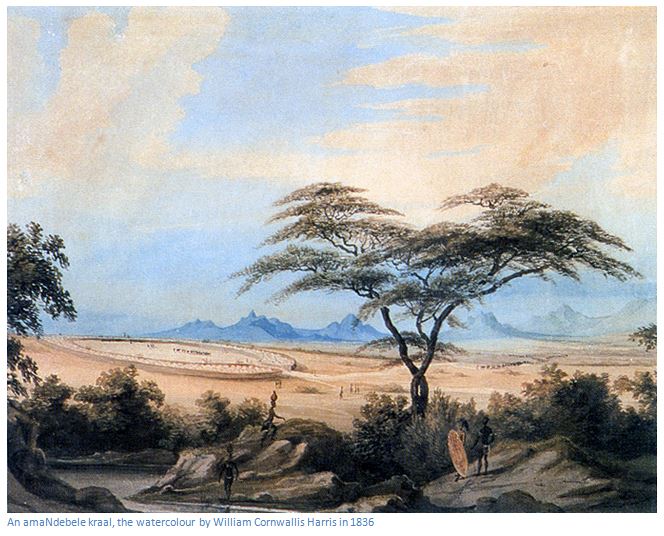 In 1832 a Zulu army raided the region and brought devastation with it; this turbulent and great migratory period is called the Mfecane or “the crushing.” Mzilikazi moved on to settle on the Groot Marico River, near Zeerust, in the North West province of South Africa where they dominated the indigenous Sotho tribes who called them the amaNdebele, "the people of tall shields" and a nation was born.

Robert Moffat came from his mission at Kuruman to visit the chief's kraal, spent ten days at the court of Marico and was hospitably entertained. Moffat described Mzilikazi as “below the middle stature, rather corpulent, with a short neck, and in his manner could be exceedingly affable and cheerful. His voice, soft and effeminate, did not indicate that his disposition was passionate; and happily for his people, it was not so, or many would have been butchered in the ebullition of his anger.”  Moffat was fluent in Zulu and the two men would sit up all night talking politics, while the missionary tried in vain to convert his host to the Church.

In 1835, the Voortrekkers (Dutch for “first travellers”) crossed the Vaal River and established themselves less than 100 kilometres from the amaNdebele, but unlike earlier travellers, they refused to seek the permission of the King, and conflict became inevitable. In August 1836, an AmaNdebele patrol killed four Afrikaners in a hunting party, and then another twelve were killed on the banks of the Vaal River. The Voortrekkers retaliated and a battle was fought at Vegkop in northern Free State where the Voortrekkers, led by Potgieter, placed forty wagons in a circle and held off more than 5,000 warriors with their guns. 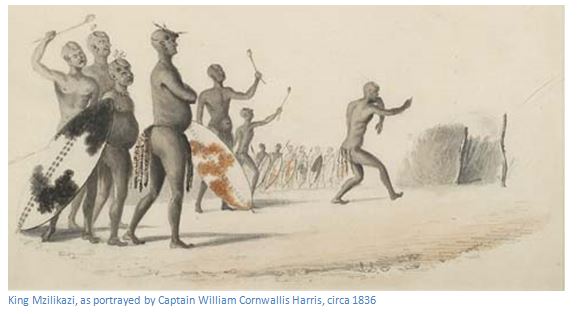 In 1837 Potgieter led a small column into amaNdebele territory and left with thousands of head of cattle and the same year another Zulu army plundered many more amaNdebele cattle. For sixteen years Mzilikazi and his people, the Khumalo clan, had spent their time in what was to become the Transvaal, since 1994 split into four provinces. Here they lived as freebooters taking cattle and captives where they could from other tribes, but in later years suffering the same medicine as they dished out from Zulu armies and the Boers.

According to tradition, Moffat advised Mzilikazi to take his people to the fertile and relatively unoccupied country north of the Limpopo River to avoid further confrontation with the Boers. Mzilikazi decided in 1838 to follow Moffat’s advice and divided his army into two sections for the long northward trek. One section of the army was under the command of Gundwane Ndiweni who took charge of Mzilikazi's heir, Nkulumane, and they settled near the Matobo Hills. Mzilikazi with the remainder of his army went north-west, raiding and plundering the peoples through whose lands he passed including the country of the Chief Zanke, who had built himself a stone fortress at Bumboosie in today’s Hwange National Park and going as far west as Lake Ngami and as far north as the Chobe and Zambezi Rivers.

A year passed with no word from Mzilikazi and as winter gave way to spring in September 1839 custom demanded that the new settlement should celebrate ncwala, or the ceremony of first fruits; but a King had to be present for the event to take place and believing that Mzilikazi had died, the tribe placed Nkulumane on the throne. The news reached Mzilikazi and he marched south. When Mzilikazi heard that they had thought him dead, he forgave the treason, until he heard they had not held the usual ceremonies on the loss of a King. Furious he had Nkulumane and the Chiefs taken to a nearby hill called Ntabazinduna, or the hill of chiefs and executed. Only the youngest son, Lobengula, was spared when he was hidden away.

The amaNdebele military strategy was to have a kingdom large enough that it had sufficient men to withstand attacks and to offer defend its territories. The population was increased through warfare and carrying out raids on neighbouring and remote tribes. AmaNdebele raids had as their major objectives the capture of cattle and captives for integration in the amaNdebele kingdom. Captives were vital to the growth of the population, female captives of childbearing age contributed children. Male captives were recruited into the army, particularly child captives, as they would grow up culturally aligned to the amaNdebele way of life. As the amaNdebele kingdom grew by assimilation of other people came the danger of being overrun culturally and so the amaNdebele established social structures in which absorbed people learnt and conformed to the amaNdebele culture.

Mzilikazi settled initially at Inyati, but then moved to Mhlahlandlela, the site of which is today marked by the memorial featured below and erected to his memory in 1941.  He incorporated the remains of the Torwa Empire with its centres at Khami, Danamombe, Nalatale and Zinjanja, then invaded the Rozwi Empire and incorporated many of the Rozvi people, although many smaller tribes joined the amaNdebele nation voluntarily because it would offer them protection from their enemies. Others became satellite territories who paid annual tribute to the amaNdebele Kingdom.

Annual raiding parties visited Mashonaland and extorted tribute of cattle. The discovery of gold in 1867 caused Mzilikazi great concern as he feared it would lead to the invasion of his country by the Boers and others seeking mineral rights. With his health fast failing, he ordered his Indunas to resist any gold exploration and retired into the Matobo hills where at the kraal of Emanxiweni, he died 5th September 1868 and was buried at Entumbane. [See the article Mzilikazi’s grave on the website www.zimfieldguide.com]

His son, Lobengula, succeeded him as King of the amaNdebele.

Mzilikazi’s memorial at Mhlahlandlela was unveiled by Sir Herbert Stanley, the Governor of Southern Rhodesia, on 17th June 1941. The memorial is built beneath the tree where Mzilikazi held court, met many of the early European travellers to this country and conducted the affairs of state. The tree features in the photo taken by Lyn Mullin below when the tree was still alive behind the national monument. He says that despite National Monuments building a fence around the tree, many amaNdebele continued to strip the bark from the tree for its curative powers and that finally Mzilikazi’s indaba tree died. 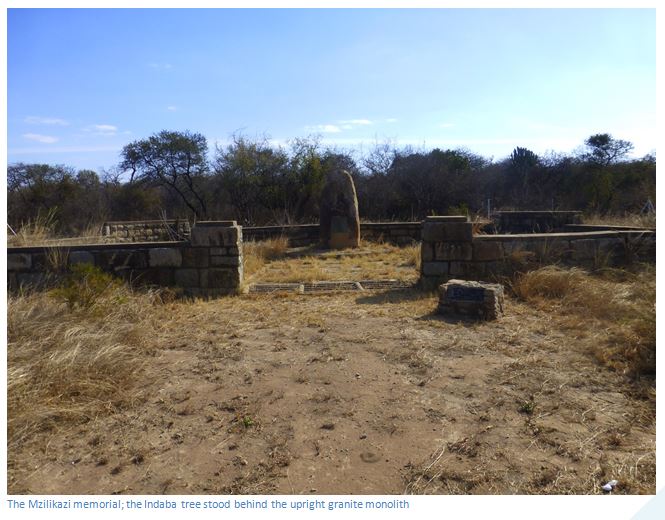 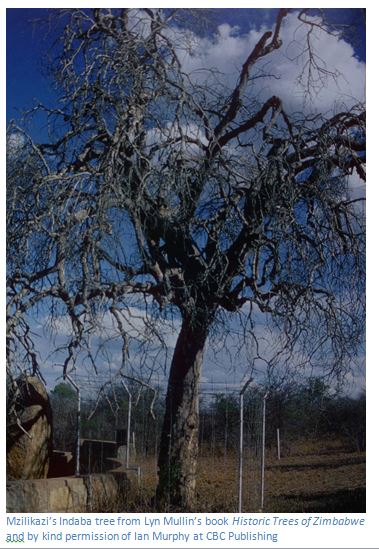 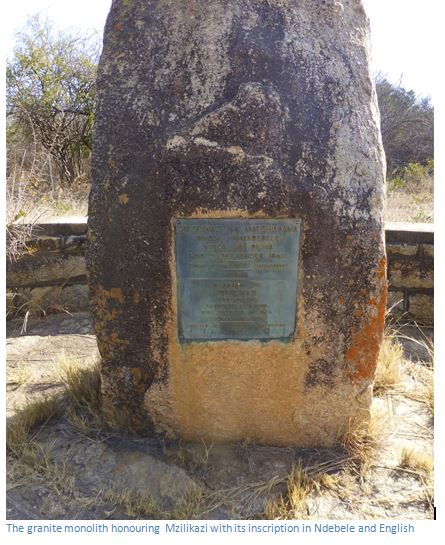 When to visit:
All year around
Fee:
None
Category:
Cultural
Historic
Province:
Matabeleland South