Quite difficult to get to and requires a seven kilometre walk. From World’s View site take the tarred road south to Silozwane / Pomongwe and Nswatugi Cave. 4 KM continue south ignoring the turnoff to Pomongwe and Nswatugi Cave on the gravel road, 11 KM turn left at the store (the road continues south to Silozwane Cave) 16.5 KM ignore the turnoff to the left and continue east, 21 KM pass the campsite, 29 KM reach camp site at Toghwana Dam. From the wall follow the path seven Kilometres to Inanke Cave, the walk taking about three hours. A guide from ZPWMA is advised if this is your first visit.

This well-lit cave is situated high up on the steep granite slopes of Inanke Mountain with broad views across the Matobo Hills. The magnificent rock art frieze which stretches in a broad painted belt nine metres (30 feet) across the wall of the cave just above eye level will amaze all visitors and provide a handsome reward for the three hour trek it takes to get here. The artists made their colours from natural pigments ranging from white to dark brown and many subtle variations of yellow, orange and red. A dense profusion of animal herds of giraffe, eland, kudu, ostrich, duiker and more fill the broad painted band running the length of the back wall. Giraffe surround the design, some galloping; Peter Garlake believed one yellow and white giraffe is the finest animal painting in Zimbabwe. Fish forms in shades of red, ochre and white are observed as are a line of trotting eland, four dark red bushbuck and shaded pink and white zebra. 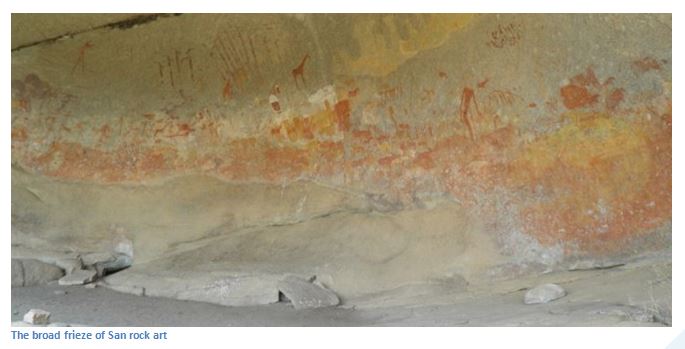 The cave is dominated by a great abstract design in the centre composed of sixteen rectangles in various shades of yellow and orange ochre with white cones to top and bottom forming linked ovals and filled with white dots in the usual format of formlings, or ovoids characteristic of the San rock art of Zimbabwe. These images represent the potency of trancers and their n/um rises during the all-night trance dances undertaken by the community of hunter gatherers in order that those that enter into trance can communicate with their Gods in the spirit world of their ancestors.

These trancers are discernible as monumental human stick-figure men marching in file with weapons on their shoulders, but these are far from simple hunting scenes and their unrealistic shapes dominate the middle of the frieze and several peripheral areas. One towers over the others: an extremely attenuated figure with the body of a man whose head is shrunk to a tiny knob and whose shoulders sprout branchlike stems. His upper torso leans forward as if struggling to stand, and lines of reddish pigment fall to the ground from his armpits.

He has entered a trance state, a ritual still carried out by the San to heal community divisions and to plead with the Gods on behalf of their relatives who may be sick or dying. As many as thirty per cent of the San will enter trance, but the experience is so exhausting that they may often collapse and need support from other trancers and physically bleed from the mouth, or nose. The rock art paintings are seen as an attempt to bring to life to the non trancers of the San community the trancers’ experiences and scenes from the spirit world. 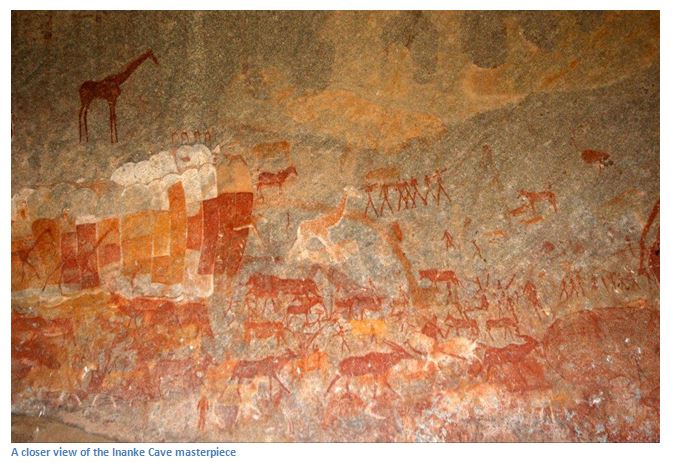 These San paintings at Inanke Cave offer a first-hand experience into the spiritual world of these Late Stone Age hunter gatherers who lived here amongst the Matobo hills thousands of years ago before they were driven into the Kalahari Desert in what is now Botswana and Namibia.

The fact that the remoteness and special effort required to get to Inanke Cave restricts the number of viewers makes a visit a very special and moving experience that will be remembered and can be talked about for a long time. The Rangers and staff of Zimbabwe Parks and Wildlife Management Authority deserve praise for preserving the park environment and this site so well. 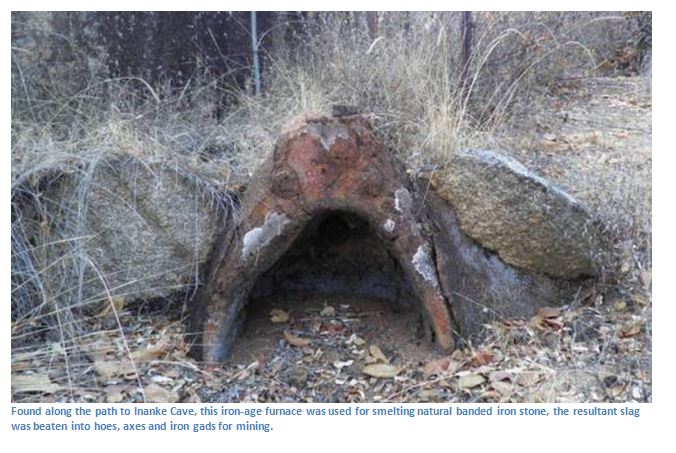