National Monument No.:
26
Why Visit?:
How to get here:

From the junction of the A4 (Beitbridge to Masvingo) and the A6 (Beitbridge to Bulawayo) take the A6 north for 30.4 KM. Turn left at a sign saying Tongwe High School and Tongwe Rural Health Centre onto a gravel road with a game fence on the right-hand side which crosses a stream at 32.75 KM and another stream at 35.4 KM. Follow the road around a left-hand bend and at 36.7 KM turn left onto a farm track which has a small rustic signpost saying Makawa Girraffe: Dam and follow the track. At 37.8 KM drive around a kraal and continue following the track east through thorn trees; 4WD may be required in the sand. 38.4 KM reach a river edge and drive across the sandstone continuing east, 38.8 KM Giraffe Dam comes into sight; park here.  Walk east between the sandstone crests for 200 metres, the giraffe petroglyph is just below the wall of Giraffe Dam and within a brick enclosure.

The term petroglyph is generally used to denote San rock engravings which have been pecked, incised scratched, ground or carved into the rock and they differ from San paintings which are painted onto the vertical rock surfaces of shelters. Most of Zimbabwe’s petroglyphs consist of animal and human footprints, with just the one known example of a naturalistic engraving of an animal. Eight are located in a cluster in Hwange National Park near the Bumboosie Monument with most of them being engravings of Zebra footprints, with another four within the boundaries of Hwange National Park. No other engraved spoor sites are known between these and three other spoor sites on Nottingham Estate and Sentinel Ranch on the Limpopo River near Beitbridge - a distance of some 500 KM, although thousands of San painted sites are known within the Matobo National Park situated in-between.  The three sites in the south are mostly zebra spoor, but also include impala, kudu and elephant spoor.

All the petroglyphs in Zimbabwe are engraved on hard sandstones, quartzite’s, greywacke and soft talc schist’s as the granite, the medium on which all the rock art paintings are concentrated, is too hard.

According to Gary Haynes in an article entitled Puzzling over the Bumbusi Spoor Engravings in Zimbabwe prepared for an oral presentation to the South African Archaeological Society there are:

The giraffe engraving described here is within the Mtetengwe Communal Lands 30 KM north west of Beitbridge carved on sandstone rock below the Giraffe dam wall and once waters probably flowed over the giraffe petroglyph when the stream was in flood. The giraffe is about 2.7 metres (9 feet) in length and the outline of the animal is deeply grooved, and within the outline, a grid of crossing lines indicates the spotted markings of the giraffe's hide. Two similar giraffe engravings, smaller and more worn, have been reported near the larger example, but none of the local people were aware of their location. According to E. Goodall and R. Summers, the authors of the rock engravings chapter of Prehistoric Rock Art of the Federation of Rhodesia and Nyasaland published by the National Publications Trust, a protective wall was built around the engraving in 1957 and this remains in place today, as does the National Monument site plaque. The giraffe is in strict silhouette, only two legs being visible. The body lines are fairly broad V-shaped grooves and an attempt has been made to indicate the mane as can be seen below. 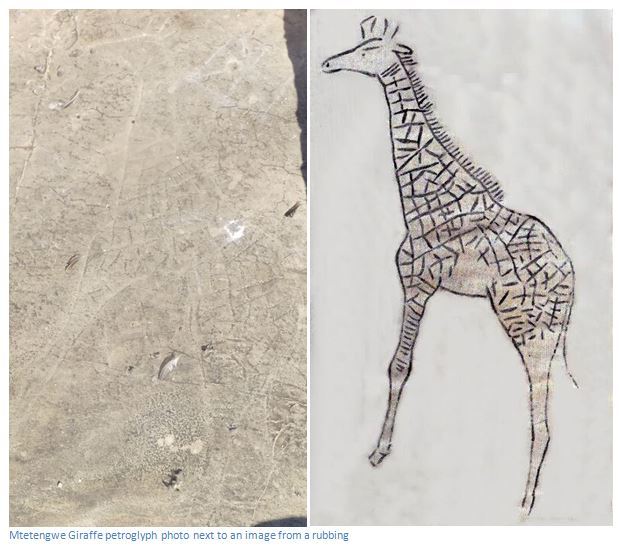 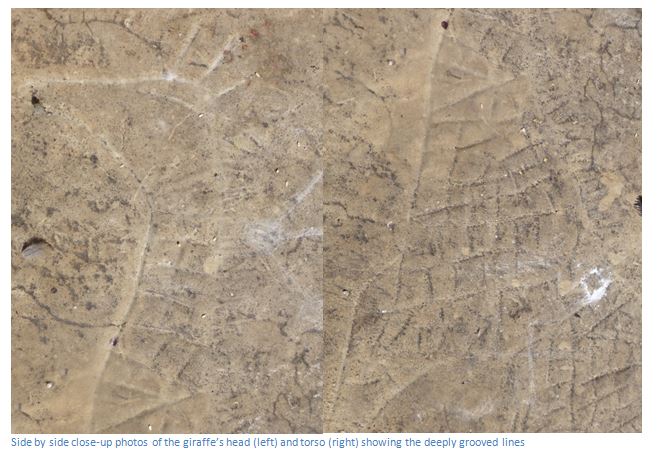 There are no visible cultural remains in the vicinity of the engraving to indicate who the artists were, or the age of the engraving. However, it seems certain that it is associated with the San hunter gatherers who lived in the Limpopo River Valley and whose rock art has been recorded by Edward Eastwood and his Paleo-Art Field Services who carried out extensive San rock art paintings research in the Limpopo River Valley in the 1990’s. Their research raised the number of documented sites in the confluence area, including South Africa, Botswana and Zimbabwe, from 40 to 120, currently the number of documented sites is over 150. In the Mapungubwe area across the Limpopo in South Africa the rock art is mainly found in the parallel series of Karroo sandstone ridges that shape the landscape. The rock art shelters are formed by erosion in the cream coloured sandstones and the engraving of the giraffe petroglyph is also on an exposed sandstone surface.

Almost all of the rock paintings in the confluence area feature typical San hunter-gatherer fine line paintings whose major themes are animals, human figures, Y-shapes and animal skin motives. Antelope are dominant, particularly the kudu, along with elephant and giraffe. The high occurrence of the kudu is more common in Zimbabwe; in South African rock art areas the eland is the most depicted animal. The importance of the female kudu is underlined by the fact that the artists generally painted them larger and took more time to create elaborate polychromes; many are depicted with a red dorsal line over the back. It symbolises the supernatural potency that San shamans acquire in trance, it signals puberty rituals and it can be depicted for rainmaking, or good fortune in hunting. Elephants and giraffes are also considered to be especially ‘potent’. 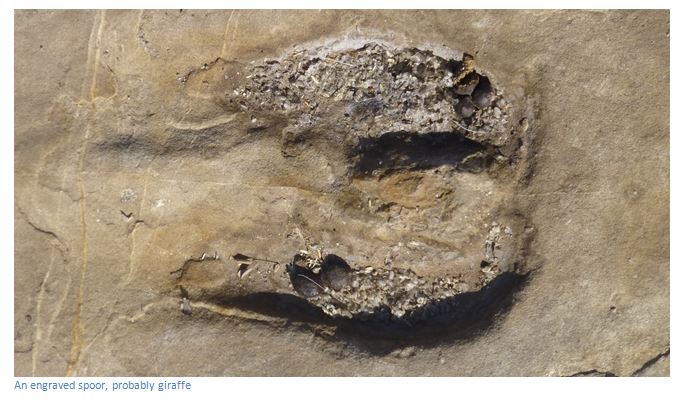 The engraved spoor shown above is not known to have been reported previously and is located between the giraffe engraving and the dam wall at the same site.

G. Haynes. Puzzling over the Bumbusi Spoor Engravings in Zimbabwe. Prepared to accompany an oral presentation at the 2010 annual meeting of the South African Archaeological Society

When to visit:
All year around Monday to Sunday 8:30am to 4:30pm
Fee:
Entrance free, but a small donation to the local guide would be appreciated
Category:
Rock Art
Province:
Matabeleland South