The shallow pools with their sandy banks and the nearby rapids provide exciting swimming and climbing opportunities, although care needs to be exercised on slippery rocks.

The surrounding granite hills contain numerous caves with old grain bins and rock art and interesting plant life; local guides can be hired to visit them.

The orbicular granite formation, 1 kilometre downstream, is a rare and fascinating geological mystery and destination for a brief exploratory walk.

With only two chalets, this destination is off the beaten track and being set within the communal lands provides a good opportunity to walk and interact with the local community.

Daily charges are very reasonable and help the local community.

Diana’s Pool is 70 kilometres southeast of Bulawayo. From Bulawayo take the A6 towards Gwanda, but turn right at the turnoff just before Mawabeni  ( 57.5 KM peg) Drive the untarred road 10 KM to Esibomvu, turn left down a road 100 metres after  Esibomvu Clinic signposted Diana’s Pool 9 KM / Rhodes Indaba site 7 KM. Cross the Nsezi stream following the road, ignore the first road to the left, signposted Tshalimbe Primary School, my GPS directed me down this road to a dead-end, and continue on straight and where the road forks right to the signposted Indaba site, continue straight on. The signpost for Diana’s Pool says 1 KM, but it is nearer 3 KM.  Pass the small business centre on the right and see the caretaker Kevin Nxumalo’s home on the left. To get to the chalets follow the track over the rocks and across the stream bearing right for 100 metres. The road is suitable for ordinary vehicles, as long as they have good ground clearance.

Situated within the Matobo Communal lands, the word ‘Embizeni’ (Place of the Pots) is derived from the potholes the rain water has carved into the granite rocks over a lengthy geological period and Diana’s Pools was named after the wife of the first Native Commissioner in the area, JP Richardson.

Piet te Velde built the chalets as a family using their personal funds.  They had permission to construct 6 chalets, but due to farm invasions in 2000 and the resulting deteriorating economy, there was very little business and so finally only two chalets were constructed. As treasurer of the Umzingwane Publicity Association and as an independent  rural development consultant Piet had a dream of developing eco-tourism in this beautiful district, but sadly with the continuing uncertain political and economic situation these plans, like many others, are on hold. 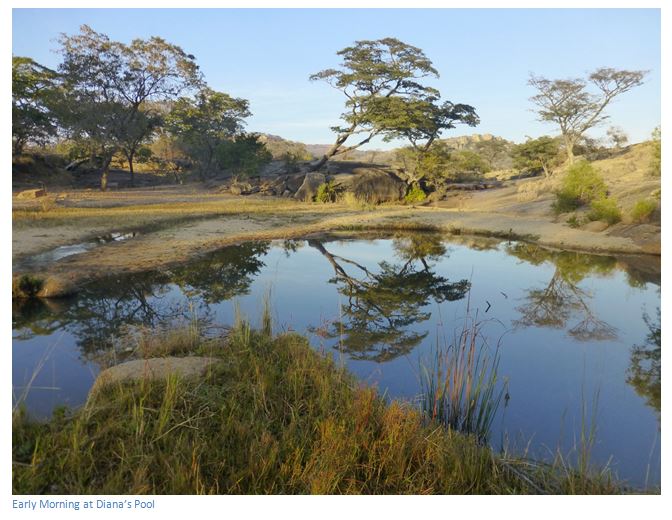 There are two chalets each with two spacious bedrooms, each having two single beds and a shower and toilet; a fitted and fully equipped kitchen and a large veranda with adjacent braai. The loft in each chalet can sleep an extra two people with mattresses and bedding is provided on request. Each chalet is fitted with solar powered lights and hot water, a gas stove and a small gas fridge. The accommodation is suitable for a maximum of twelve people.

The chalets are well-constructed and comfortable and much better-equipped than the ZimParks equivalents.

Family friendly and definitely worth a visit with plenty of activities within the near vicinity, such as the Rhodes Indaba site and Nyunteya Cave, and a good point for exploration of the magnificent Matobo and surrounding area. Local people are extremely friendly and welcoming and the community benefits greatly from projects such as these. 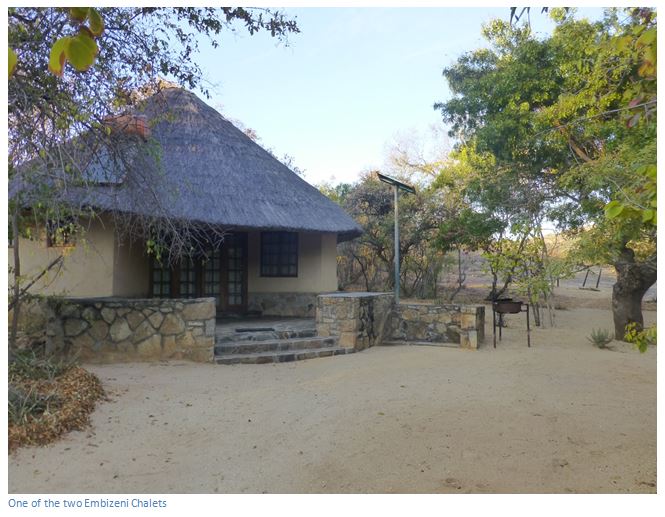 The pools are set in the rocks with cascades and slides and sand along the river edge. Things to do include:

Enjoying the riverine habitat around the chalets

Great exploring for children in the shallow pool with sandy beach

Relaxing in the outdoors and a braai (barbecue) under the stars

When to visit:
All year around Monday to Sunday 8:30am to 4:30pm
Fee:
Entrance and accommodation fees are payable
Category:
Scenic
Cultural
Rock Art
Province:
Matabeleland South