Why are they so important?

Their stomach acid is exceptionally corrosive which allows them to safely digest decaying carcasses infected with various types of bacteria (e.g. botulinum toxin, hog cholera bacteria, and anthrax bacteria) that would be lethal to any other wildlife or humans. So they have a dual role in the wild.  By removing carcasses rapidly and efficiently they act as nature’s landscape cleaners – disposing of all the left-overs of wildlife kills and they also act as sanitisers – protecting humans, livestock and wildlife from infectious diseases.

What vultures are there in Zimbabwe?

Of the eleven vulture species found in Africa, in Zimbabwe we are lucky to count six species all of which are listed by the IUCN as either Endangered or Critically Endangered:

(1)  The commonest is the White-backed Vulture 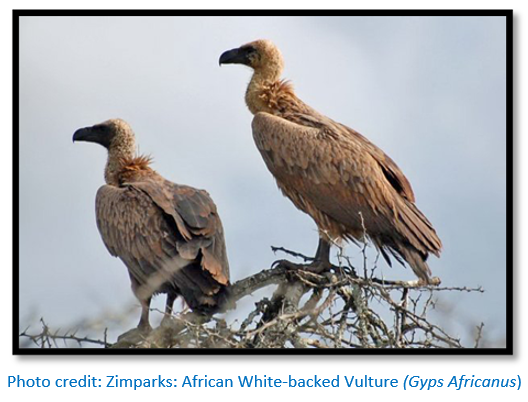 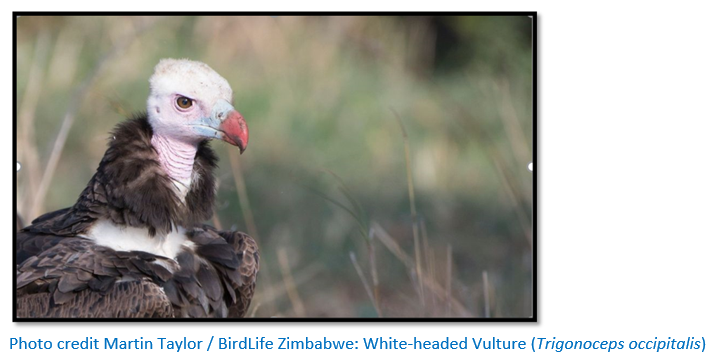 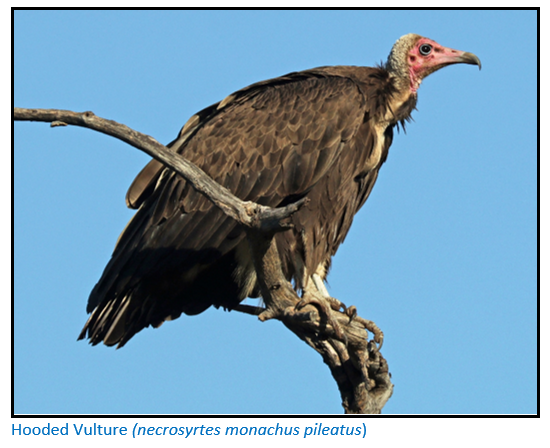 All three species are listed by the World Conservation Union (IUCN) as Critically Endangered. 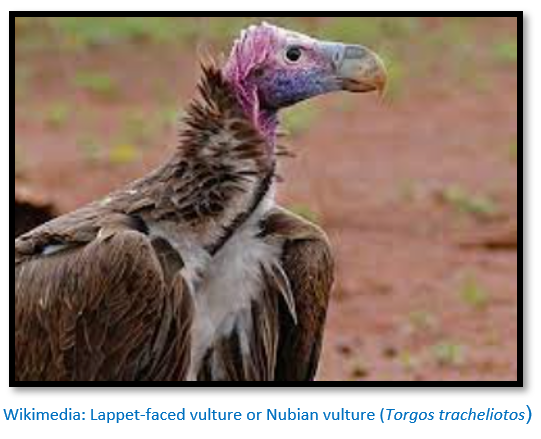 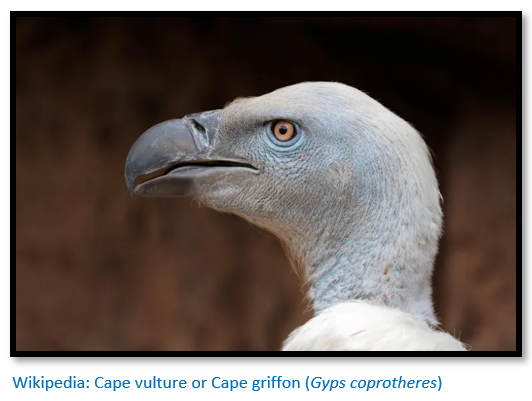 These two species are categorised as Endangered. 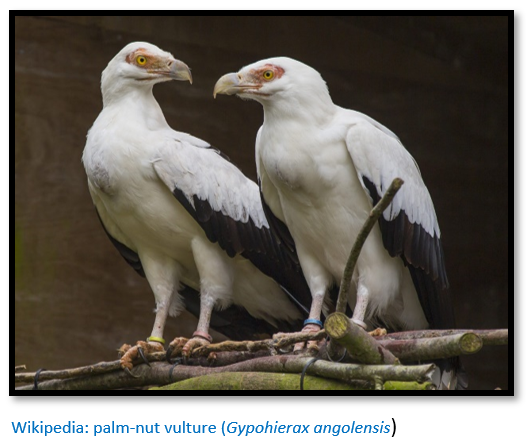 The Palm-nut Vulture being very habitat-specific, is vulnerable to destruction of its palm habitats.

According to BirdLife International[i] vultures are facing a number of threats including:

Vultures are a protected species in Zimbabwe

Fortunately in Zimbabwe, vultures have special protection under the sixth schedule of the Parks and Wildlife Act Chapter 20:14 as Specially Protected Species – it is illegal to kill a vulture, even accidentally.[ii]

Our Vulture Action Plan that was approved in 2019 by Government makes Zimbabwe one of the few African countries that has given special protection to vultures and confirms Zimbabwe’s commitment to protecting these birds. Great credit to Zimparks and wildlife conservation groups for their support.

In recent years there has been increased poaching of wildlife across the country’s national parks and conservancies using poisons, such as cyanide used in gold-mining, to target large prey like elephants for their ivory. By poisoning their waterholes the poachers not only kill  the elephants but any other animals including civets, hyena, jackals, mongooses and vultures that die in large numbers locally after feeding on the poisoned carcasses. Over 300 elephants were poisoned in Hwange National Park in 2013.[iii]

Often vulture poisoning is intentional: circling vultures are great sentinels for poached carcasses and can alert wildlife authorities such as Zimparks to the crime-scene, so poachers will often lace wildlife carcasses with poison to cover their tracks. A single poisoned elephant can kill hundreds of vultures, and this can have huge cascading impacts on vulture populations. 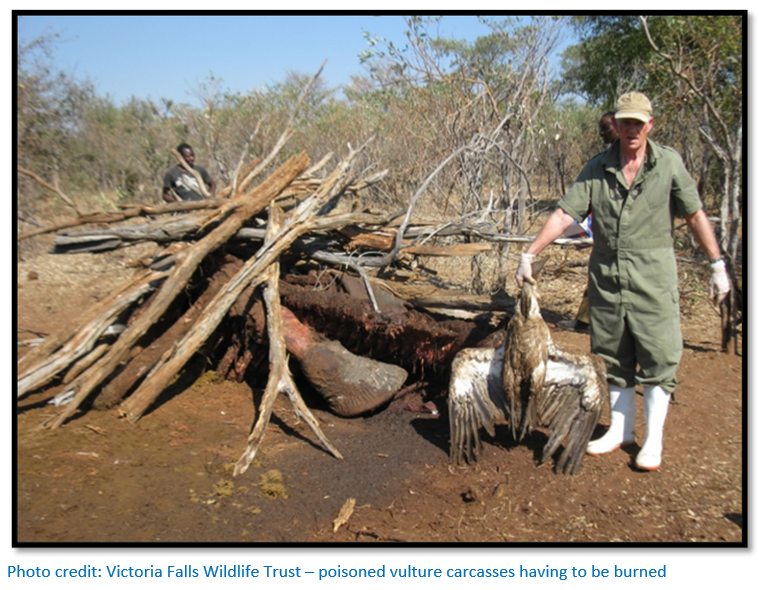 A routine patrol by game rangers in Gonarezhou National Park, in south-eastern Zimbabwe in May 2017 revealed a shocking scene; 94 vultures had died including the white-backed vultures, a critically-endangered species, after feeding on an elephant carcass poisoned by poachers.[iv]

Kerri Wolter, founder and manager of VulPro, a South African vulture conservation organization[v] said these incidents of cyanide poisoning could: “wipe out the entire breeding population of vultures in Zimbabwe.” She warned that this would have serious consequences because vultures clear away carcasses and help to stop the spread of diseases like anthrax, rabies, cholera and tuberculosis. Wolter said: “Without vultures the environment will crash.

They are a keystone species in that they help keep our environment in sync. We need our vultures to prevent the extinction of other species from disease epidemics and outbreaks.”

Vulture populations have crashed and this impacts on humans

Vultures only lay two eggs every four years so the impact of poisoning on their numbers can be very dramatic. Over the last 30 years, populations of seven African vulture species have fallen by a hugely significant 80-97%. Fadzai Matsvimbo says in the 1990’s the Asian sub-continent lost significant sizes of its vulture populations. This caused feral dog populations to explode and in turn, rabies became a widespread problem.[vi]

Birdlife Zimbabwe, VulPro and other conservation organisations in Southern Africa are trying to assist with vulture research, identification, education and conservation.

Other strategies to help vultures
The tourism industry is also doing its bit for vulture conservation with hotels creating “Vulture Restaurants” -  feeding posts where fresh meat is regularly provided (usually leftover scraps and bones) This provides  a useful source of food for the vulture populations, but also educates visitors about vulture conservation and provides an opportunity for researchers to monitor the vultures.

Victoria Falls Safari Lodge offers a free “Vulture Culture” activity every afternoon that begins with a briefing about the ecological importance of vultures and the plight they are facing, before guests take a short walk down a bush path to a specially-constructed hide to view the vultures feeding. 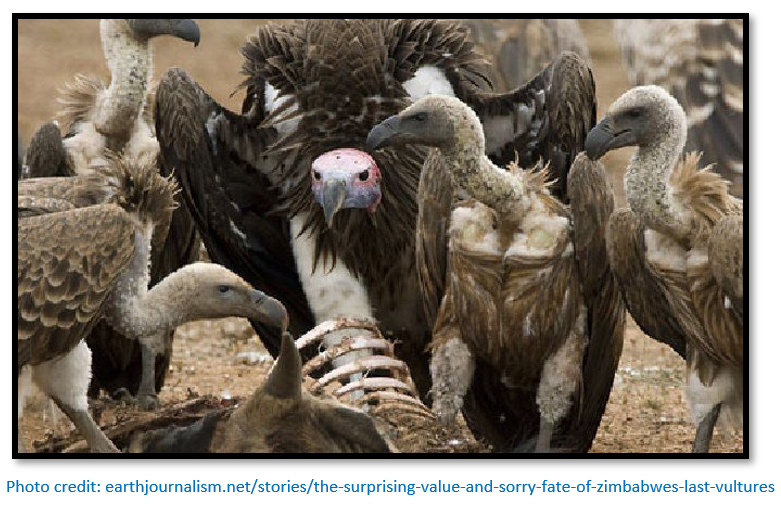 Conservation organisations are working to spread awareness. For example Victoria Falls Wildlife Trust[vii] have a conservation education program using a female vulture named Judge who has become through training as a fledgling an ‘Ambassador for Vultures’, educating local school children and teachers about the critical need for vulture conservation in Zimbabwe.[viii]

Well done to Zimparks for celebrating Vulture awareness day on their website[ix] last year and also to the post on Birdlife Zimbabwe who celebrated vultures in 2017[x] with a general article on vultures. Both organisations do a huge amount on the ground to educate the public and make them aware of the plight of vultures and the efforts they make to conserve the birds for Zimbabweans.

BirdLife Zimbabwe is a Zimbabwe-based organisation doing excellent work and I would recommend newsletter – The Vulture/Gora/Inqe Newsletter: Issue 8: https://mailchi.mp/.../july-2021-the-gorainqe-newsletter......which highlights some of their initiatives including:

(1)  BirdLife Zimbabwe conducted a survey along the Shangani River with collaboration from Gwanda State University, National University of Science and Technology, Zimparks and Gwayi Vulture Support Groups to expand their vulture database in Gwayi ECA.  33 White-backed vulture nests were recorded with 85% of the nests being active. Below is a photo of some of the dedicated team that took part…great effort, congratulations! 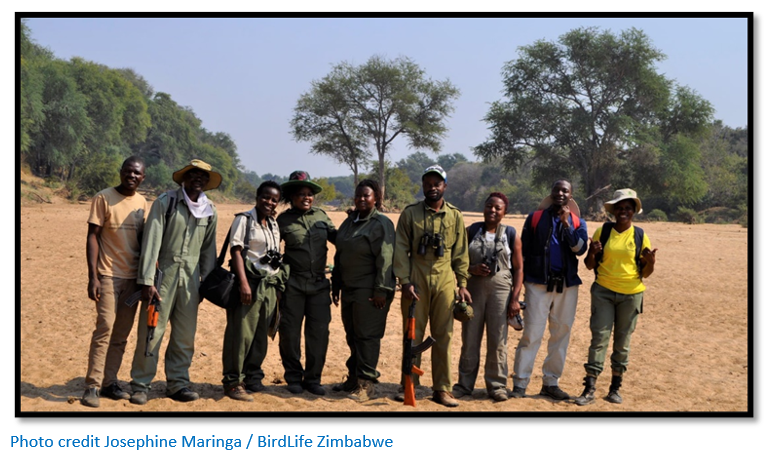 (2)  BirdLife Zimbabwe met the Zimbabwe Traditional Healers Association (ZINATHA) in Harare and Bulawayo, the largest traditional body with an estimated membership of 55 000, Discussions were meant to explore the drivers to vultures and their parts in African traditional medicine, understand the scale and severity of the trade, find alternatives (plant-based) that can substitute the use of vulture parts and influence the use of alternatives. In Bulawayo, the ZINATHA members admitted that vultures are being harvested for belief-based use amongst unregistered traditional healers and other faith-based institutions.

(3)  In 2015 BirdLife Zimbabwe in collaboration with Zimbabwe Parks and Wildlife Management Authority (Zimparks) convened a Vulture Action Planning Workshop to come up with strategies to improve the conservation status of vultures. Raising awareness has been a huge part of that strategy as the public is generally not aware of the plight of vultures.

(4)  BirdLife Zimbabwe initiated the Vulture Safe Zones (VSZ) concept in the Gwayi Intensive Conservation Area (ICA) and Save Valley Conservancy in 2019. The VSZ concept was developed to conserve vultures an breeding habitats that are outside protected areas as these vultures are prone to persecution for various reason. 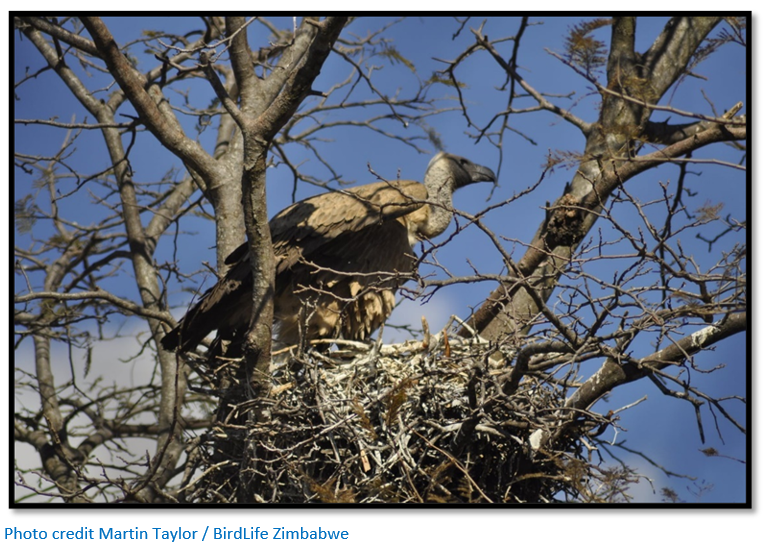 Vultures are an iconic species and deserve our protection

Most of our vultures have a wing span of two metres and more, even up to three metres and with body weights of between 2kg and 10kg, they are an inspiring sight. Seeing them soaring in a thermal and then gathering in dozens, even hundreds, at a carcass in the Zimbabwe bush, makes for an absolutely unforgettable sight. This is how we know them in the African savanna. There cannot be a single game ranger or tourist guide who is not familiar with these birds, and hopefully knowledgeable about them too. They are one of Africa’s most inspiring sights and part of our common heritage, an inheritance that should be enjoyed by all generations of Zimbabweans and the world. 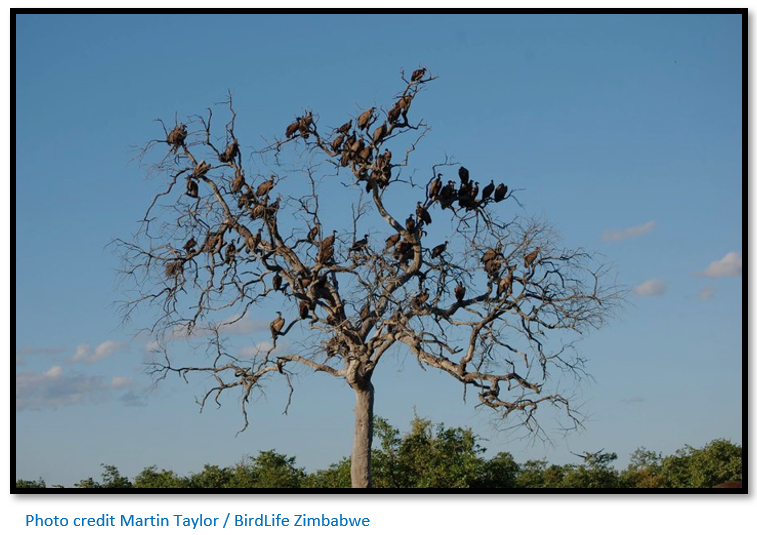