In Zimbabwe the Zambezi river is accessible by road, or by boat at Victoria Falls, Binga and Chete, Kariba, Chirundu, Mongwe, Mana Pools, Sapi and Chewore Safari Areas and Kanyemba

The Zambezi is the fourth longest river in Africa after the Nile, the Congo and the Niger and flows 2,574 kilometres (although every source has a different length!) from eastern Angola into Zambia where it flows north-south, then along the northern borders of Naminbia and then Botswana, before forming the border between Zambia and Zimbabwe to Mozambique and finally into the Indian Ocean. The Zambezi Valley has some of Zimbabwe best game-viewing areas; much of the country’s tourism is centred on the river – at Victoria Falls, Batoka Gorge, Lake Kariba and the islands and Mana Pools National Park. The river offers great canoeing, exhilarating white water rafting, river boarding and fishing.

The Zambezi source is in a black marshy dambo very close to the border where Zambia, Angola and the Democratic Republic of the Congo meet at about 1,500 metres (4,900 feet) in the Mwinilunga District; from there it flows through Zambia, Angola, Namibia and Botswana then back along the border of Zambia and Zimbabwe finally discharging into the Indian Ocean at its delta in Mozambique. The Zambezi River is usually considered in three sections. 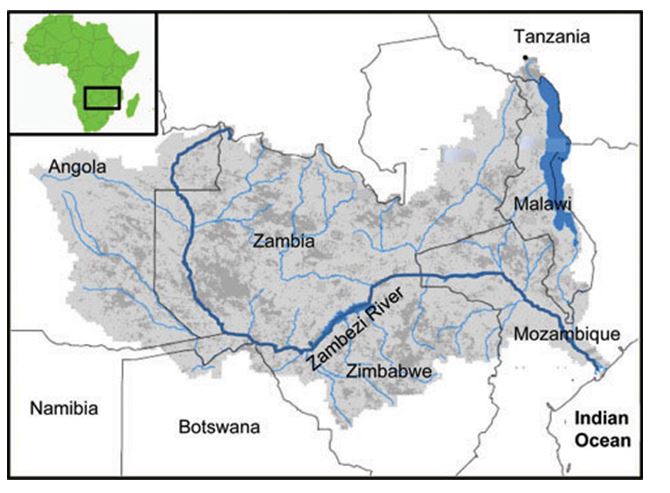 From the source at Mwinilunga the river flows to the south-west out of Zambia and into Angola for about 240 kilometres (150 miles) where it accumulates the bulk of its headwater drainage before re-entering Zambia and is fast flowing at Cholwezi rapids, the Chavuma Falls and the Ngonye Falls. Over the next 800 kilometres the river runs south dropping just 180 metres and is mostly slow flowing as it enters the Barotse Floodplain where the river reaches up to 25 kilometres in width during the rainy season.

The upper part of the Zambezi River is only sparsely populated by Lozi cattle herders, farmers and fishermen. During the rainy season when the plain is in flood a ceremony known as the Kuomboka takes place as the local people move to higher ground to escape the flood waters.

The river then turns easterly and forms the border between Zambia and Namibia at the Katima Mulilo rapids before meeting the Chobe River and briefly forming a border with Botswana; before becoming the border between Zimbabwe and Zambia. It is at Kazungula that the four countries of Botswana, Namibia, Zambia and Zimbabwe meet. The river then flows about another 80 kilometres down towards Victoria Falls and this section above the falls is where tour operators run lots of exciting activities including kayaking, canoe trips and river cruises on both the Zimbabwe and Zambian banks of the river. This section of the river has many islands and channels and attracts much bird and wildlife.

The Victoria Falls are considered the boundary between the upper and middle Zambezi. For the next 500 kilometres the river serves as the border between Zambia and Zimbabwe. At the Victoria Falls Bridge many of the adventure sports take place including the famous bungee jump. Most white water rafting takes place in the Batoka Gorges below the Victoria Falls which is categorised as a grade 5 river, the highest possible grade, meaning this is as wet and wild as it gets. From here the river continues to flow due east for about 200 kilometres cutting through gorges of basalt rock between 200 to 250 metres high and drops 250 metres over 240 kilometres before entering Lake Kariba. 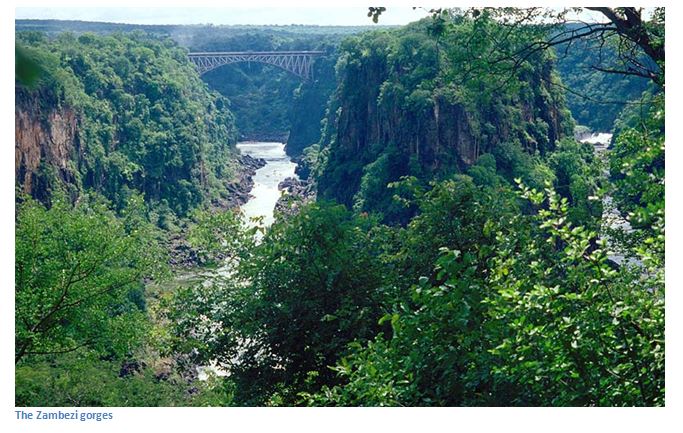 About 160 kilometres from the mouth, the Shire River from Malawi joins the Zambezi. On its approach to the Indian Ocean the river splits up into a number of branches forming a delta. A sand bar obstructs the four principal mouths, being the Milambe, Kongone, Luabo and Timbwe, but to the north a branch called Chinde mouth has depths of between two and four metres and is used for navigation. A 100 kilometres further north the Quelimane River, named after the town at its mouth, receives the overflow of the Zambezi in the rainy season.

Wildlife of the Zambezi

Large populations of hippopotamuses are found on calm stretches of the river and many crocodiles and monitor lizards. Birds are abundant, with species including heron, pelican, egret and African fish eagle present in large numbers. The riverine woodland supports large mammals including zebra, buffalo and elephant. The Zambezi also supports several hundred species of fish such as bream, catfish, tigerfish and yellowfish. The bull shark, or Zambezi Shark inhabits coastal waters, but has been found far inland in the Zambezi.

The proposed Transfrontier Okavango-Zambezi Conservation Park will cover parts of Zambia, Angola, Namibia, Zimbabwe and Botswana, including the famous Okavango Delta in Botswana and Victoria Falls. It is thought that the cross-border park will help with animal migration routes and assist in the preservation of the wetlands.

Geology of the Zambezi River

The Upper Zambezi River used to flow south more than two million years ago into a lake which extended over the Makgadikgadi, the southern Okavango and most of the Chobe Swamps with an area of about 60,000 square kilometres, roughly the size of present-day Lake Victoria and it is believed that the Upper Zambezi drained into this huge ancient lake. At the same time 1,000 kilometres east a western tributary of the Shire River, the Middle Zambezi, eroded a deep valley on its western escarpment and at the rate of a few centimetres a year began cutting back the bed of its river on an east-west axis. In doing so, it captured a number of south-flowing rivers such as the Luangwa and Kafue, eventually capturing the large lake at Makgadikgadi which then emptied eastwards. The Middle Zambezi was about 300 metres lower than the Upper Zambezi, and a high waterfall formed at the edge of the basalt plateau across which the upper river flows forming the first Victoria Falls somewhere down the Batoka Gorge near where Lake Kariba is now.

Vasca da Gama was the first European to see the Zambezi in January 1498, when he anchored at what he called Rio dos Bons Sinais  (River of Good Omens), near Quelimane, a navigable channel to the Zambezi River although the connection had silted up by the 1830’s. The Cuama was the local name for a Swahili outpost and on maps from the early 1500’s the Zambezi River became known as the 'Cuama River'.

In 1552, Portuguese chronicler Joao de Barros notes that the same Cuama River was called Zembere by the upriver people of Monomotapa and the Portuguese Dominican friar Joao dos Santos, visiting Monomotapa in 1597, reported it as Zambeze. Zambezi appears to be derived from a locality, probably named 'M'biza' (or something very close to that) in the original Bantu. 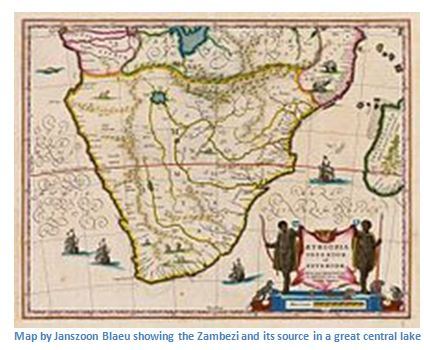 There was a belief drawn from classical antiquity and reinforced in Ptolemy’s second Century maps that all the great African rivers — the Nile, the Senegal, the Congo, now the Zambezi, too — were all sourced from a  great internal lake and this is a feature of many early maps of Africa.

Early mapmakers knew the Zambezi region as the Empire of Monomotapa and the course of the river and the position of lakes Ngami and Nyasa (now Lake Malawi) are given broadly accurately in early maps with the information probably from Swahili traders.

The first European, David Livingstone came up the missionary road through Bechuanaland and explored the upper Zambezi between 1851 and 1853. Two or three years later, he descended the Zambezi to its mouth and discovered the Victoria Falls and accompanied by John Kirk in 1858 Livingstone came up river as far as the Victoria Falls and also travelled up the Shire River to Lake Malawi.

For the next 35 years very little exploration of the river took place, but 1878 the Portuguese explorer Serpa Pinto explored the western tributaries of the river and in 1884 the missionary Frederick Stanley Arnot travelled between the watersheds of the Zambezi and the Congo and identified the source of the Zambezi. Two expeditions led by Major A St. Hill Gibbins in 1895 - 1896 and 1898 - 1900 explored the upper basin and central course of the Zambezi.

The river is frequently interrupted by rapids and so has never been an important long-distance transport route. David Livingstone's Zambezi expedition attempted to open up the river to navigation by paddle steamer, but was defeated by the rapids in the Cahora Bassa (or Kebra Bassa) Gorge. It is often possible to travel by canoe along the river and many small villages are only accessible by canoe as they can be pulled along the shore, or carried around the rapids.  A paddle barge service operated for a period in the 1930’s upstream from Livingstone; but today regular river services only go as far as Tete on the lower Zambezi.

Bridges across the Zambezi

From the source towards the Indian Ocean they are:

Cazombo road bridge, Angola,  bombed in the civil war and not yet rebuilt

Chinyingi suspension bridge near the town of Zambezi, a 300-metre footbridge built as a community project

Katima Mulilo road bridge, a 900 metre road bridge between Namibia and Sesheke in Zambia, opened 2004, completing the Trans-Caprive highway connecting Lusaka in Zambia with Walvis Bay on the Atlantic coast.

Kazangula bridge - the first stage commenced in 2013 and it is hoped the bridge will be open by 2018 to replace the Kazungula Ferry.

Victoria Falls bridge (road and rail) was the first opened in April 1905 and was initially intended as a link in Cecil Rhodes' scheme to build a railway from Cape Town to Cairo and is 250 metres long.

Tete Suspension bridge is a 1,000 metre road bridge built in the 1970’s with a new bridge being currently constructed a few kilometres downstream. 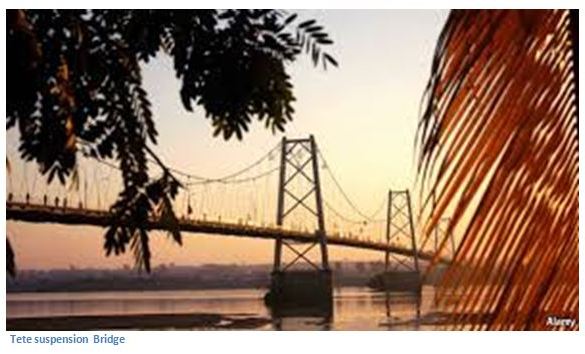 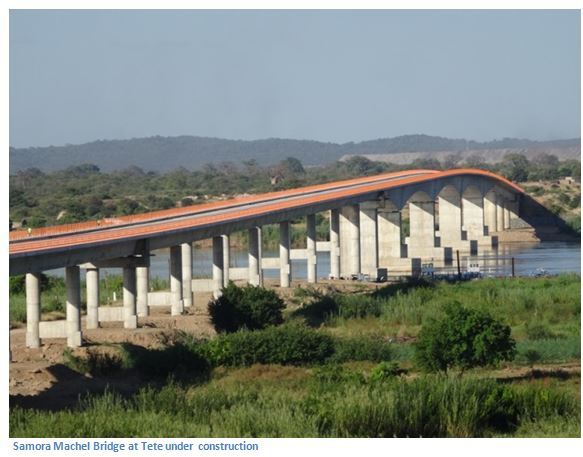 Dona Ana bridge built in 1935 linking Malawi originally by railway, but converted to single-lane road is the longest at 3 kilometres, but since late 2009 is again a railway bridge.

Caia bridge construction started in 2007 and the bridge officially opened in 2009 and was named after the president of Mozambique, Armando Emilio Guebuza. With a length of 2,376 metres it is only exceeded by the Dona Ana bridge which has been restored as a rail only bridge.

When to visit:
All year around
Fee:
None
Category:
Scenic
Game Park
Province:
Matabeleland North