Home > Matabeleland North > Mopane, a Hwange lion is wounded by a Bowhunter and like Cecil the lion left in agony for 24 hours before being killed

Mopane, a Hwange lion is wounded by a Bowhunter and like Cecil the lion left in agony for 24 hours before being killed

sub-titled: When are ZimParks going to act against hunters who lure lions out of Hwange National Park with bait and kill them on neighbouring concessions?

Team Africa Geographic[i] has filed a report based on a tweet from LionExpose! and other reliable sources[ii] that yet another Hwange lion, Mopane, has been lured out of the unfenced Hwange National Park with bait (i.e. a dead animal was placed as bait near a hide) and killed on the same Antoinette concession that Cecil the lion was killed in 2015. 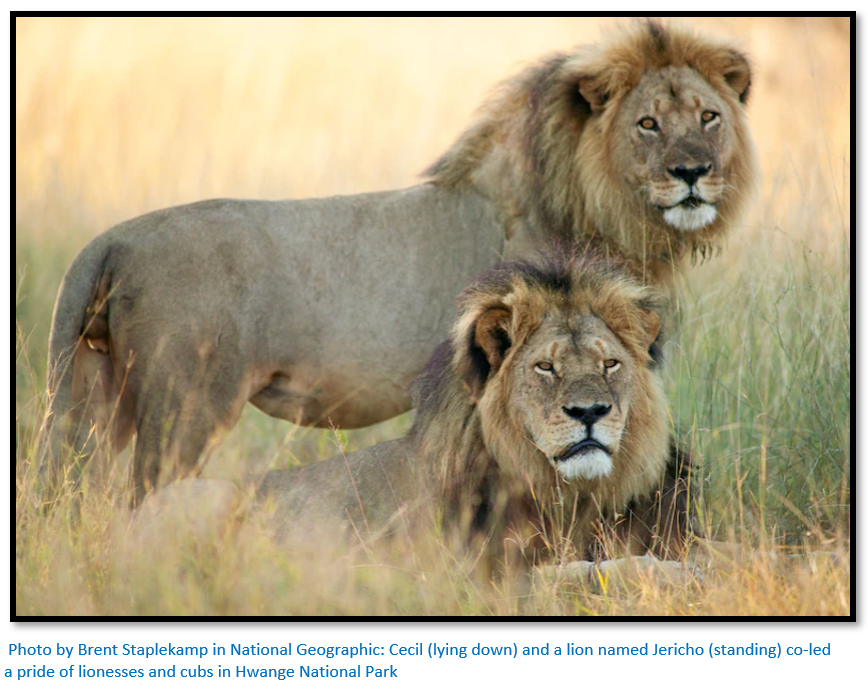 The circumstances of the death of Mopane are very similar to those of Cecil the lion. Bait was used to lure both lions out of the safety of Hwange National Park into the Antoinette concession. Lions clearly do not recognise park boundaries and the concession may have been part of the hunting territory of both Cecil and Mopane. In fact, the safari operator big_game_safari_international stated as much on its website[iii] (“we border against Hwange game reserve and mopani (sic) travels in between the two areas”) and where they also give their tariffs.[iv] 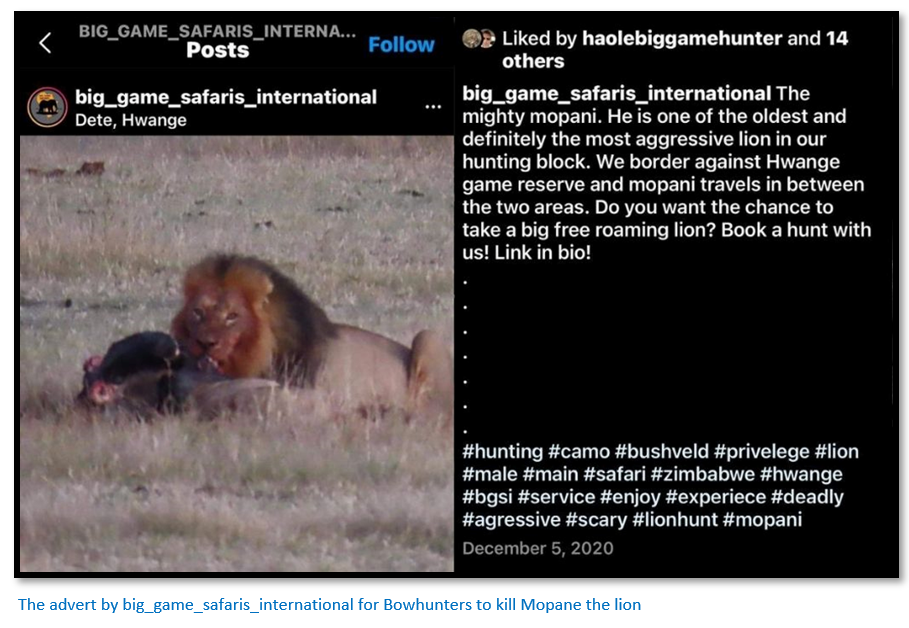 Cecil the lion was wounded with an arrow on the 1 July 2015 and then killed the next morning in a Bow hunt by an American dentist Walter Palmer who later was said to be furious when he discovered the lion had been collared. He subsequently apologised and said he regretted killing Cecil. Did he give up killing animals?…probably not. The apology was most likely because of the impact the negative publicity around the killing had on his dental practice in Minneapolis, Minnesota.

The hunter and landowner tried to cover up their illegal hunt

Zimeye in 2015 reported that Theo Bronkhorst, the hunter and Honest Ndlovu, the concession holder, tried to cover up the killing of Cecil the lion by:

(1)Doing a quota transfer, recording that Cecil was shot in another concession which had a lion quota and

(2)Theo Bronkhorst tried to destroy Cecil’s collar in order to cover up the deliberate killing, but the collar had a GPS tracker and recorded where he was shot, so the cover-up attempt was ultimately unsuccessful.

The map below by WildCRU, the Wildlife Conservation Research Unit, part of the University of Oxford's Department of Zoology shows on the right-hand side yellow and red stars where Cecil the lion was shot from a hide and died close-by and the green star approximately six kilometres to the northeast where Cecil’s collar was dumped after it stopped transmitting.[v] Both the act of smashing the collar’s transmitter and dumping it away from the scene should be seen as deliberate attempts to mislead the authorities. 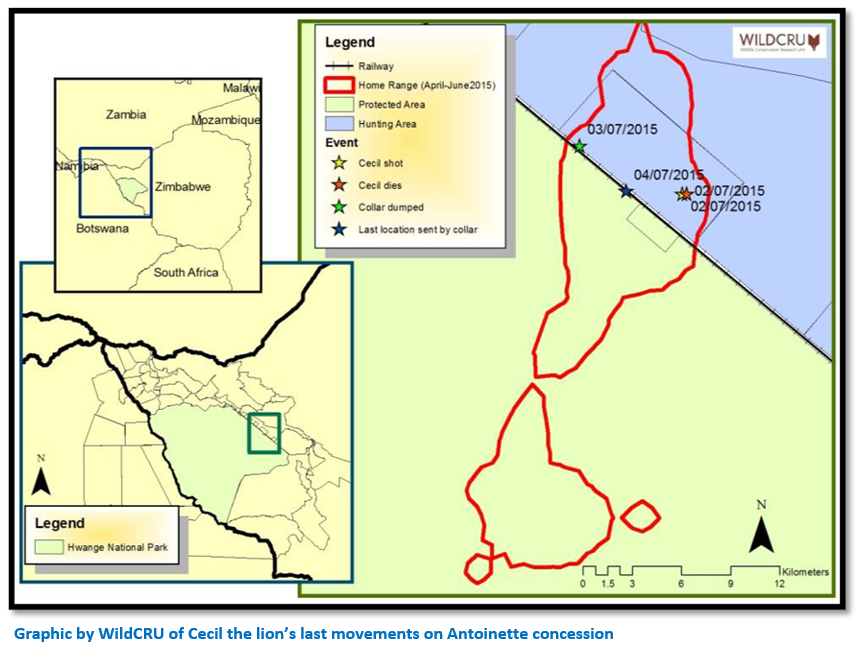 The killing of both lions, Cecil and Mopane, took place on the eastern edge of Hwange National Park which is separated from the concession by the railway line running northwest towards Hwange from Bulawayo. Honest Trymore Ndlovu has the lease for the Antoinette concession in the Gwayi Conservancy in the Hwange district. Ndlovu is a prominent landowner in the Gwayi Conservancy and probably well connected politically with the ruling party ZANU-PF.

In 2015 Ndlovu did not have a lion allocated for his concession’s hunting quota making the hunting and killing of Cecil the lion illegal.[vi]

Honest Ndlovu faced criminal charges for his part in the illegal hunt of Cecil the Lion along with the Hunters Theo and Zane Bronkhorst. If they had been found guilty of criminal poaching charges they might have faced 9 years in gaol and fines of £$20,000 each. 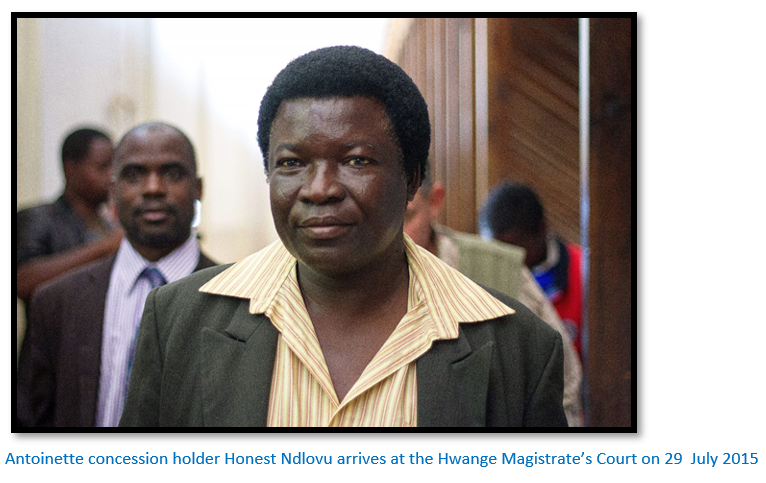 Ndlovu also faced charges of allowing an illegal hunt to occur on his property. He posted bail in August 2015, but the authorities later stated that the documentation for the hunt was proper. Ndlovu was freed on $200 bail and the case was postponed to 18 September 2015. The charge carries a one year jail term, or $400 fine but the current status of his case remains unclear. The potential penalties are rather trivial when compared with the 9 year mandatory sentence given to communal farmers caught poaching. 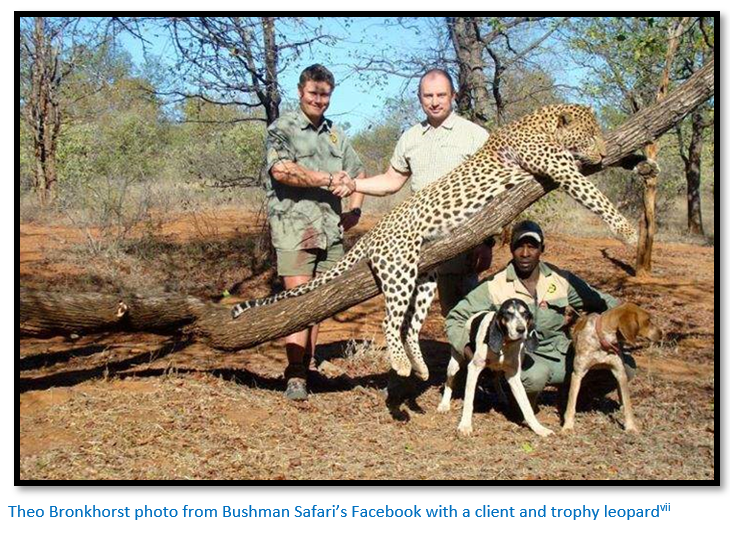 Despite the above and a lot of tough talk from Zimbabwe authorities the Hwange court ruled that the charges against Theo Bronkhorst: "were too vague to enable him to mount a proper defence,” and were dropped against both the American hunter / dentist Walter Palmer and the local professional hunter Theo Bronkhurst.[viii]

The killing of Cecil sparked outrage around the world and ignited a debate about trophy hunting. He was just one of hundreds of lions killed by trophy hunters in Zimbabwe over recent years, but his story connected with animal lovers around the world in a new way

Once might seem a coincidence; twice seems to be stretching one’s credibility to the limit. Mopane was killed on 5 August 2012. 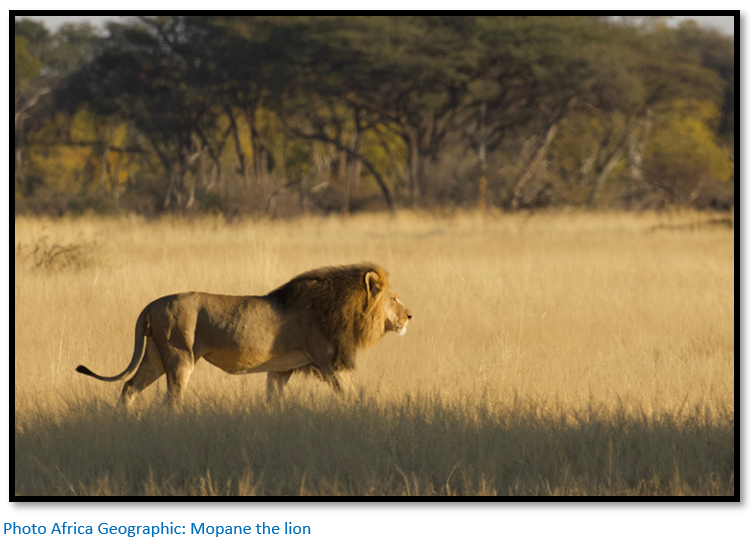 The similarities between the Cecil and Mopane lion killings

Phillip Smith – the health professional – seen below. His website states: “Our Vision – to offer each patient the highest level of service along with our expertise in order to greatly improve disability, injury and disease.”

Funny, there’s nothing about wounding lions and leaving them in agony for 24 hours! 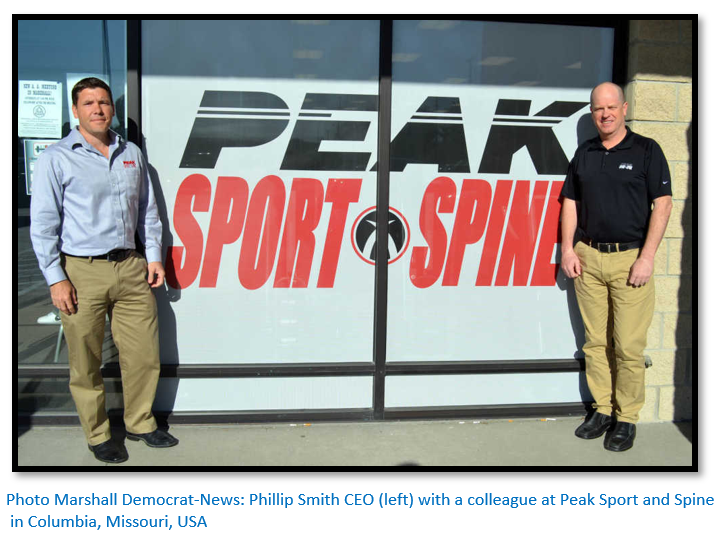 Sidhule, another Hwange lion killed in 2019

Mopane was in a coalition with another male lion, Sidhule, with both lions frequently seen by photographic safari lodges in and around Hwange National Park. The coalition had been successful, the two having sired offspring with the Nyamandhlovu pride, the Nora pride and the Guvalala pride. One of the best-looking lions of the park, Netsayi, who is in charge of Cecil’s pride, was sired by Sidhule.

In August 2019 Sidhule was lured from Hwange and is alleged to have been killed by another Bowhunter named as Colton Payne from Houston, Texas, in another hunt organised by Chattaronga safaris.[xi]

Trophy hunters have killed many of Hwange iconic male lions

The article continues: “Of the 62 Hwange lions (28 males and 34 females) tagged during a five-year (1999 to 2004) research project by Oxford University’s Wildlife Conservation Research Unit, 24 were killed by trophy hunters. Of these, 13 were adult males and six were sub-adult males. Let’s be clear about this point – 72% of male Hwange lions identified by a research project were killed by trophy hunters and, of those, 30% were under four years old.”

When are the Zimbabwe authorities going to understand that the $50,000 paid by rich Americans to hunt our lions with a bow and arrow is just peanuts compared with the revenue from a lifetime of international and local tourists on photographic safaris? Don’t they understand the negative publicity that is generated by these ugly incidents which are being broadcast world-wide place so many legitimate Zimbabwean photographic tourist business and even their own national parks in jeopardy? 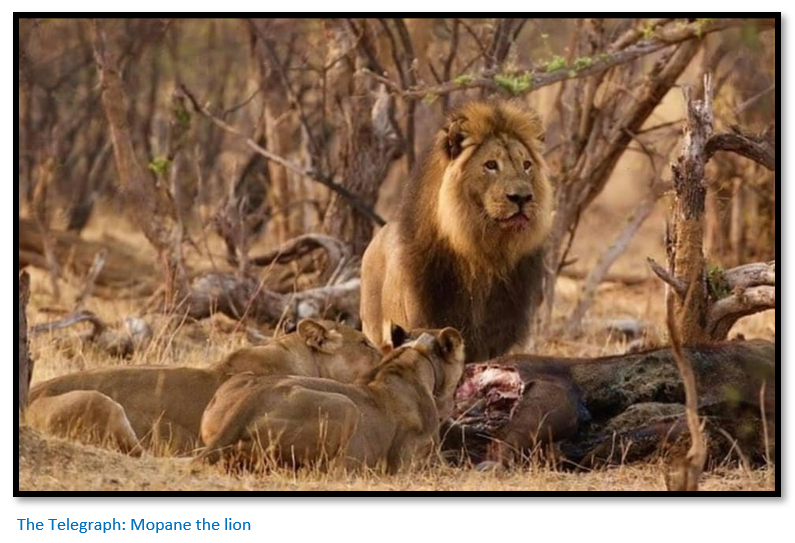 Both Cecil and Mopane were still dominant lions with breeding lionesses and cubs. Their presence would prevent other male lions killing their offspring…now there are no guarantees that the cubs or the lionesses will survive. The justification for trophy hunting elephant bulls seem to be that they are beyond having a breeding role – why are lions seemingly treated so differently?

Kitty Block, president and CEO of Humane Society International said, "Mopane was a father and played a significant role in his pride. Without him, his pride is now vulnerable to takeover by another male or group of males, which may lead to the killing of the cubs and females in his pride. Yet, as with Cecil six years ago, the perverse pleasure some people derive from killing iconic animals brought this noble lion's life to a tragic end. Another trophy hunter spending tens of thousands of dollars on a globe-trotting thrill-to-kill escapade shows humanity at its worst. It is shameful that the U.S. has the distinction of being the world's biggest importer of hunting trophies. Enough is enough."[xiii]

This is the standard argument for those who favour trophy hunting, but the killings of all these Hwange lions highlights the fact that Hwange National Park is surrounded not by agricultural Communal lands, but by safari and hunting concessions that benefit nobody but the safari operators and the dubious concession owners such as Honest Ndlovu who have generally gained them through their political connections with the ruling party and state organisations that are dedicated to maintaining the status quo at all costs.

There is no benefit to local communities around Hwange National Park from these safari operators that run the trophy hunting businesses, and this is why ZimParks are forced to remain silent when this question is asked of them.

There is no ethical basis for this kind of trophy-hunting

Dragging bait in the form of an antelope out of Hwange National Park – we know that ZimParks simply do not have the resources to patrol such a large area, into a concession area with a compliant concession holder and then shooting the victim at close range with a bow and arrows from a hide requires neither skill nor courage. It does not deserve to be called hunting. Then leaving the victim in a mortally wounded state extends beyond all ethical boundaries – it is amazing that the professional hunters, most of whom are members of the  Zimbabwean Professional Guides Association can stomach being part of a business that carries out acts like these.

some of the Hwange tourism stakeholders affected by hunting on the national park’s borders issued the following statement.

We, as stakeholders in Hwange, are forced to speak anonymously due to imminent threats posed by hunters and ZimParks profiteering from the hunting of lions. We are absolutely devastated by the killing of Mopane, a dominant pride male that lived in Hwange National Park and its boundaries. The killing of dominant males on the boundary areas is not conservation. It is unsustainable and will lead to the further demise of an already depleted and dysfunctional lion population.

Both Cecil and Mopane were not anonymous lions unknown to photographic safari operators and tourists and local residents; they were well-known lions and special to Hwange National Park and they should not have been killed in this way. Further killings of this kind will cause ZimParks more negative publicity and ultimately harms the tourism industry and therefore the economy of Zimbabwe.

[iv] Biggamesafaris.co.za lists trophy hunting for male lions as $16,000. Daily rates and levy’s for a lion hunt are $1,200 per day for 21 days before extra charges

[vi] Quote from the charity Lion Aid - with the proper quota, it is legal in Zimbabwe to bait lions, shoot them with a bow and arrow, and even lure them off a park.

[vii] Cornering leopards with dogs or hunting 30 minutes after sunset and 30 minutes before sunrise or using artificial lights is banned in State safari areas in Zimbabwe. Perversely hunting leopard with dogs can done on private land with a special permit. Source://www.shakariconnection.com/leopard-hunting.html

[ix] The Africa Geographic article states: At the time of his death, Mopane was dominant over two prides. He leaves behind two lionesses and six subadult offspring aged around 17 months – the Somadada pride. His other pride, an offshoot of the Guvulava Pride, consists of two lionesses with two cubs, likely sired by the Chiz Boys. Interestingly Mopane seemed to have adopted these roughly six-month-old cubs. It would have been fascinating to see how the dynamics of this fledgling pride played out. Mopane was in a coalition with another male lion, Sidhule, with both lions frequently seen by photographic lodges in Hwange. In August 2019 Sidhule was lured from Hwange and killed by another Chattaronga client.