National Monument No.:
59
Why Visit?:

The National Monument of Bumbusi consists of two distinct parts, a dry-stone building dating from the eighteenth and nineteenth Centuries, now ruined, and a series of rock engravings, which are both described briefly.

In spite of the arduous journey necessary to get there, a visit to Bumbusi is very worthwhile, even if you are not interested in the archaeological sites as the surrounding scenery is amongst the most beautiful in the National Park. 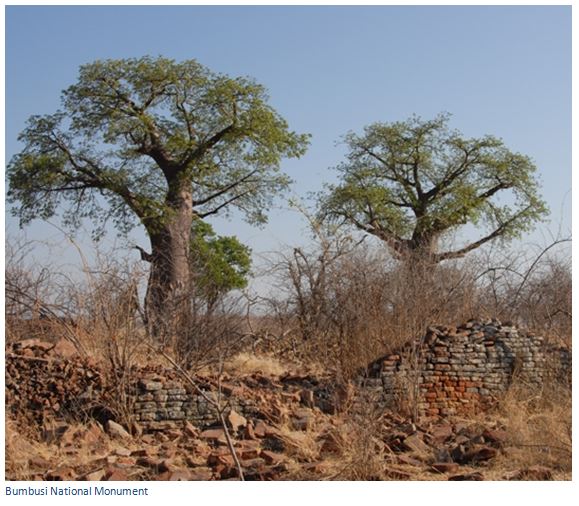 I am very grateful to Gary Haynes for letting me quote from his article cited at the end of the article and use his illustrations.

Built in the same style as Great Zimbabwe and distributed over a vast area, these sandstone walls date back to the eighteenth and nineteenth centuries. Due to its location deep in the bush of Hwange National Park in the northern Sinamatella area, this archaeological site has not yet been researched intensively. In 2008 the floors of 18 dwellings were carefully exposed, some of them had little cavities built into them for the well-known Zimbabwean  game of Tsoro.

When the Nguni, under Zwangendaba of the Khumalo clan, invaded the country of the Rozwi at the beginning of the nineteenth century, they put to death the Mambo, the great chief, at his fortress of Ntaba ka Mambo, but the Mambo's son, Zanke, escaped and fled westward. Zanke, with some of his father's people travelled until he came near Bumbusi and built this dry-stone fortress.

Bumbusi River flows through a valley about six miles long and half a mile wide. On the south side of the vlei are sandstone kopjes, on the northern side are basalt kopjes. Bumbusi was built on the southern kopjes, and slabs of sandstone were used to build its walls. The workmen chose an elevated site and levelled the ground, then built their walls round the outer edge. The walls were three to four feet thick and the interior of the walls was rammed full of rubble and small stones. No mortar was used, for the men were dry stone builders, and local tradition relates that there were three classes of men employed in the building. The trimmers  used an adze to shape the stones, the carriers conveyed the stones from the trimmers to the  builders, who placed the stones in position.

Inside the girdle wall numerous dividing walls partitioned the enclosure. Traces of circular wood and dagga huts within the thick stone walls may still be seen amongst the vegetation that has sprung up.

At the highest point of the fortified kopje a huge baobab tree casts a shade over Zanke's kraal—a specially fortified enclosure at the top of the hill, with space for one or two huts only. The sole approach to this fortress within a fortress was along a narrow passage enclosed by high walls, topped with small towers. The passage was wide enough for only one person to pass at a time. 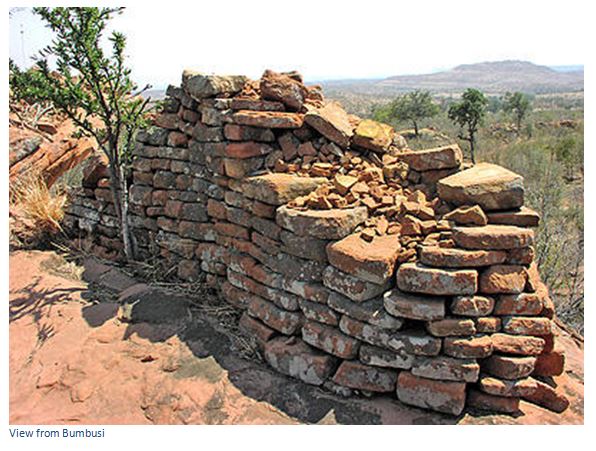 The project was enormous and time limited, because fear stalked every workman the building was crude and hurried, today the fortress stands ruined and desolate.

When the final blow fell upon Zanke and his tribe it came not at the hands of Zwangendaba of the Khumalo clan, Chief of the Nguni, but from another Khumalo, the great Mzilikazi, the Lion of the North, whose story forms another chapter of Zimbabwe history.

Close to the National Monument, as indicated on the map below, are petroglyphs engraved into the sandstone by San hunter gatherers. 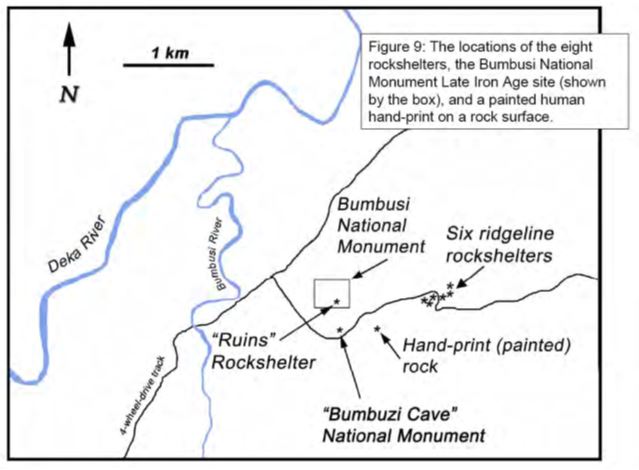 Previously I wrote that the Bumbusi rock engravings were discovered at the beginning of the twentieth century. Clearly this is incorrect as Thomas Leask in The Southern African Diaries (P173) writes in his entry for Monday 20 July 1868: “Our guides took us a little way from the path to show us some engravings on a large sandstone. They were principally rude cuttings of the shape of the footprint of zebra and the different kinds of antelope. There were some other marks of which the guides gave an interpretation of their own, for certainly I could not see the shadow of a resemblance to the things which they were said to represent. When asked by whom these marks were made, they said it was the first Wankie that ever lived. When that was they did not profess to know. They knew or had heard of five of that title. The first three were killed by their own people, the fourth was killed by the Matabele and the fifth is the Wankie who now reigns. Wankie seems to be the title of the chief; the people interpret the word as meaning the Supreme Being.”

These carvings have been made on the face of great blocks of sandstone. In each case they are more or less protected from the elements by an overhanging slab of rock. There are three sets of rock engravings at Bumbusi, the first 180 metres from the ruins, the second 800 metres away and the third about 2.5 kilometres away. The engravings all show spoor of game and other wild animals, and some human footprints and are life-size and very distinct. It has been observed that the lion spoor depicted show the animal with five toes. Most lions have a four-toed spoor, but just occasionally five-toed lions are encountered and so the engraving records something that is unusual, but not unknown.

The spoor of the extinct quagga is shown on these rocks, as well as the spoor of kudu, impala, wildebeest, waterbuck, roan and sable antelope, eland, giraffe, buffalo, rhinoceros and warthog. Most of these animals still roam the Hwange Game national Park that surround Bumbusi.

The rock shelters were formed in Upper Karoo Sandstone which eroded along the least resistant bedding planes to produce rock overhangs and corridors between enormous boulders.  The rock shelters with petroglyphs and painted designs mostly open to the north or northwest, with some margins facing east and west. 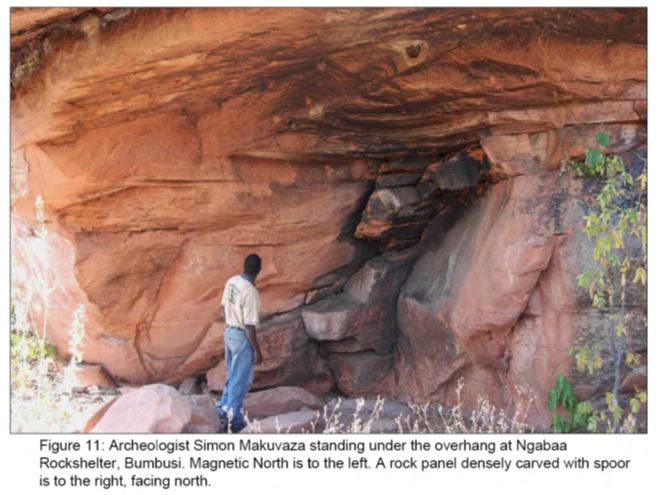 According to an interesting article by Gary Haynes entitled Puzzling over the Bumbusi Spoor Engravings in Zimbabwe the number of recorded engravings are as follows:

Bumboosi Cave has 187 engravings on its walls and at least another 17 on its exterior roof surface. 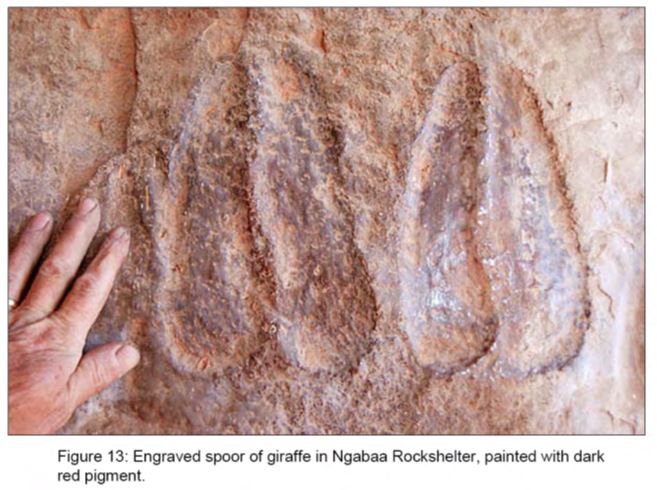 Many Late Stone age tool artefacts were discovered during excavations in Impala and Ngabaa rock shelters…an estimated 80,000 lithic artefacts were recovered from a volume of about 6 cubic metres of sediments in the two rock shelters and an estimate of 40,000 animal bones and teeth and other objects by Gary Haynes and archaeologists from National Museums and Monuments of Zimbabwe in 2008.  The bulk of these artefacts appear to be between 2,300 and 4,000 years old,

Visitors may also be interested in the Giraffe petroglyph at Mtetengwe described under the Matabeleland South section.

G. Haynes.  Puzzling over the Bumbusi Spoor Engravings in Zimbabwe.  An oral presentation at the 2010 annual meeting of the South African Archaeological Society