The Newsday Reporter Garikai Mafirakuvera wrote in a recent article which needs highlighting that: “the European Union has reportedly withdrawn its €16 million offer for development of infrastructure for protection of wildlife in the vast Save Conservancy over the Zimbabwe government’s reluctance to end land invasions and respect property rights.

The EU extended the offer three years ago in a bid to make the Great Limpopo Transfrontier Park (GLTP) project a success, but government could not guarantee protection of property rights in order to access the fund.”

The article quoted Environment, Tourism and Hospitality permanent secretary Munesu Munodawafa who in an interview confirmed the loss of the €16m EU aid: “but said the Zimbabwe government has since resumed talks with the EU to consider using the money for related projects in the country.”[i]

This is clearly just a smokescreen to cover up the fact that the failure to reform property rights in Zimbabwe has resulted in yet another “own goal.” The EU made the grant to foster development of the Great Limpopo Transfrontier Park and will not agree to transfer the grant for other related Zimbabwean projects because the same objections will arise.

This latest news comes after previous reports from the South African and Mozambique ministers of tourism that Zimbabwe was failing to meet their commitments regarding Gonarezhou National Park, Sengwe communal lands and Savé Conservancy in the formation of the Great Limpopo Transfrontier Park.  This despite President Emmerson Mnangagwa pushing the “Zimbabwe is open for business” mantra at almost every international platform he is invited to address.

The two maps below show the situation as it exists and as it is envisaged in the future with the establishment of the GLTP. 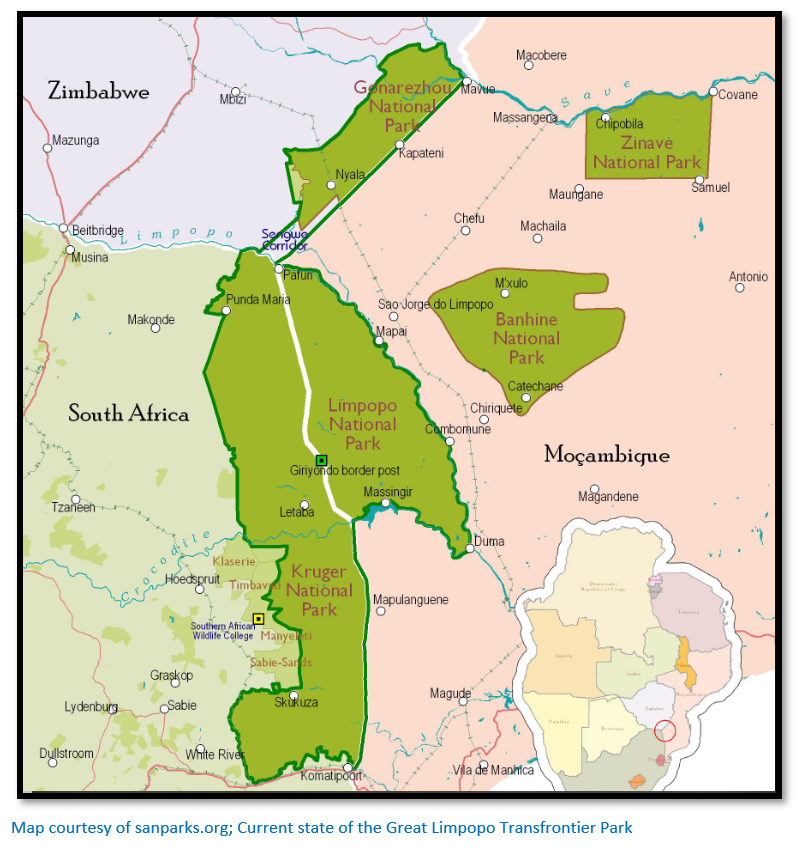 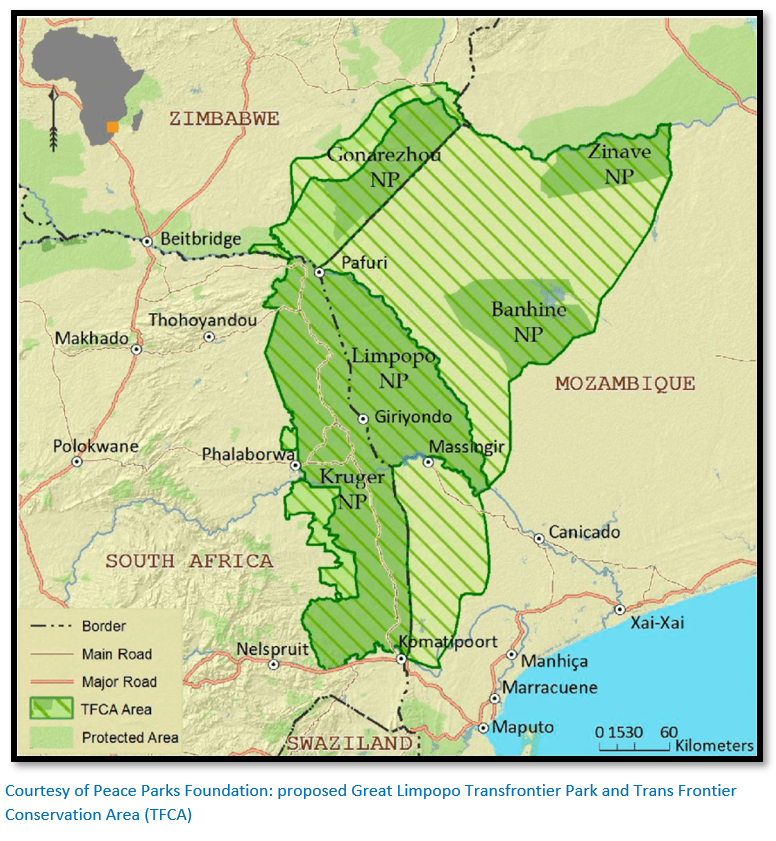 The Great Limpopo Transfrontier Park is just one of a number of transfrontier conservation areas (TFCAs) that are currently planned for the Southern African region.

The establishment of transfrontier conservation areas is a textbook model of “joined-up thinking” between the relevant governments, the private sector, international agencies, donors and NGO’s which rightly needs to be applauded. Specifically with the GLTP these entities comprise: the World Bank, USAID Regional Centre for Southern Africa, the EU, the German Federal Ministry for Economic Cooperation and Development through Kreditanstalt für Wiederaufbau, WWF Netherlands, Novamedia, the Rufford Maurice Laing Foundation, the Dutch National Postcode Lottery, Deutsche Bank, SAFRI/DaimlerChrysler, the African Wildlife Foundation and Peace Parks Foundation who are all making major contributions to the TLFP development.

Development of the concept of the GLTP

The second Mozambican President Joaquim Chissano who served 1986 – 2005 is credited with initiating the GLTP with a meeting between himself and the World Wide Fund for Nature (WWF) in 1990 which resulted in a feasibility study the next year by the World Bank and led to the Skukuza agreement in 2000 between South Africa, Mozambique and Zimbabwe to establish a transfrontier park and surrounding conservation area – at the time called Gaza-Kruger-Gonarezhou.

Working groups working under a technical committee resulted in an international treaty being signed at Xai-Xai, Mozambique by the three countries to establish the Great Limpopo Transfrontier Park. Co-ordinating the process of creating the TLFP rotates between the three countries every two years.

Phase 1 - GLTP which will link the Limpopo National Park (formerly known as Coutada 16) in Mozambique; Kruger National Park in South Africa; Gonarezhou National Park, Manjinji Pan Sanctuary and Malipati Safari Area in Zimbabwe, as well as two areas between Kruger and Gonarezhou, namely the Sengwe communal land in Zimbabwe and the Makuleke region in South Africa into one huge conservation area of 35,000 km².[ii] The GLTP would be managed as an integrated unit across three international borders uniting some of the best and most established wildlife areas in Southern Africa.

Phase 2 - The GLTP will then be expanded into the Transfrontier Conservation Area (TFCA) to include Banhine and Zinave National Parks, the Massingir and Corumana areas and interlinking regions in Mozambique, as well as various privately and state-owned conservation areas in South Africa and Zimbabwe bordering on the transfrontier park which will result in the establishment of a larger transfrontier conservation area measuring almost 100,000 km². Both the extent of the GLTP and the TFCA are shown on the second map above produced by Peace Parks Foundation.

The primary purpose of the €16m fund was to erect a perimeter fence along the GLTP corridor through Sengwe communal lands linking Gonarezhou with the Kruger that would enable wildlife from the inter-connected countries to move freely over borders and to provide additional funds for Savé Conservancy.

Why the aid was lost to Zimbabwe

Some of the properties in Savé Conservancy are owned by individuals from EU member countries under Bilateral Investment Protection and Promotion Agreements (BIPPAs), but in 2000 and afterwards during the land reform program Zimbabwe failed to respect the agreements and property rights after it turned a blind eye to the invasion of the properties leading to the Savé Conservancy losing over 30% of its land to newly-settled farmers.

This loss of land forced the Savé Conservancy to relocate over 500 elephants and 1,500 impalas, lions and wild dogs to Chizarira National Park in Gokwe’s Sengwa Gorge area and two other privately-owned game parks in Mashonaland West and Central provinces due to overpopulation. 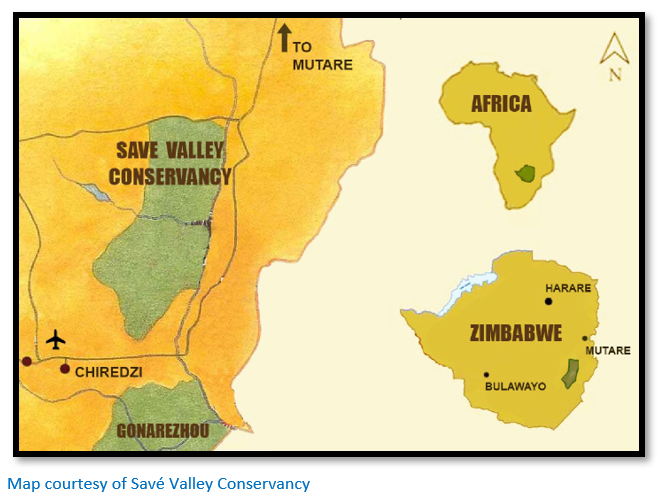 The European Union (EU) has officially decommissioned its €16 million fund offer for the development of infrastructure for the protection of wildlife in the Savé Conservancy after the three year period of offer lapsed due to the Zimbabwe government’s reluctance to end land invasions and respect property rights.

This does not mean that the Zimbabwe government cannot re-engage with the EU to use the funds for other projects or to reconsider the Savé Conservancy, but until the legal rights of property owners are respected the outcome is unlikely to change.

South Africa and Mozambique continue to meet their commitments

South Africa and Mozambique, the other parties to the GLTP have secured foreign funding following extensive consultations with local communities and up to 150km of military fence have been pulled down on their borders. These funds have enabled wildlife to be translocated where appropriate, demining of the border areas carried out, infrastructure including roads and border posts have been constructed.

Mozambique funded these initiatives partly from a R65 million grant from the German Development Bank for infrastructure development, while another R65 million from the EU has been used for resettlement of local communities from the footprint of the Limpopo National Park.

The South African government gave a R40 million grant for the building of infrastructure and private game lodges have been constructed in the eastern part of the Kruger National Park anticipating the opening up of the seasonal migration routes for wildlife to and from Gonarezhou National Park.

It is clear that Mozambique and South Africa have committed to their pledges and will fulfil their promises; Zimbabwe once again is the laggard and will fail to meet their pledges. This is not due to lack of expertise or commitment by ecologists and Zimparks officials and others directly involved at Gonarezhou National Park, Savé Conservancy, Sengwe communal lands or in the various Communal Areas management Programmes for Indigenous Resources (Campfire) but solely due to political policies at a national level that continue to scupper Zimbabwe’s economic prosperity and lack of political will.

Transformation of the region

The Liberation War in Zimbabwe and the civil war in Mozambique during the 1970’s and 1980’s led to major civil disruption in both countries and major displacement of populations within the area of the proposed TFCA. Management of the National Parks broke down almost completely and widespread poaching which resulted in almost the complete slaughter through poaching of large mammals such as elephant and rhino.

With peace restored people have moved back to their former homes and so have the animals helped by conservation agencies. In 2002 a translocation program was started with over 4,000 animals moved from Kruger National Park into the neighbouring Limpopo National Park.

The Kruger National Park has proved to be one of the top five tourist destinations in South Africa attracting over a million tourists annually and there is good reason to believe that the combination of wildlife, scenic beauty and cultural attractions would result in a major boost to eco-tourism in the region. Local communities too should benefit from jobs and development of local infrastructure. 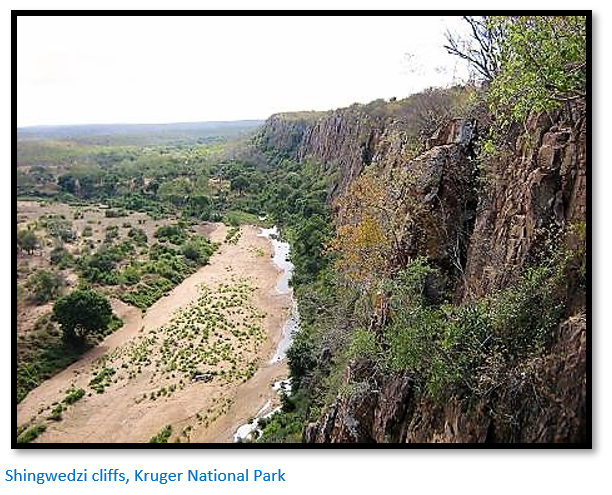 It appears that the Mozambican and South African treaty commitments made in 2000 to the Great Limpopo Transfrontier Park are being honoured and both countries will become an integrated National Park system and reap the economic and wildlife benefits; Zimbabwe on the other hand remains stuck in a quagmire of its own making with current tourist destinations limited to Victoria Falls and Great Zimbabwe. If current politicians believe that eco-tourism will lead to the country’s economic recovery then national policies regarding land invasions and protection for land and property rights need to be urgently overhauled.

[i] In a Bloomberg article dated 31 July 2019 Desmond Kumbuka said that the state broadcaster ZBC had reported that  The permanent secretary in Zimbabwe’s tourism ministry, Munesu Munodawafa, has been arrested by the country’s anti-graft body for alleged abuse of office. Munodawafa is the third senior government official to be detained by the Anti-Corruption Commission. Environment and Tourism Minister Prisca Mupfumira appeared in court last week on corruption charges involving $95 million, while former Director of State Residences Douglas Tapfuma was arrested on Tuesday.