What the westerner refers to as a witchdoctor can be several different people to a Shona- speaking person. N’anga is the Shona word equivalent to witchdoctor, but the Shona-speaking people have different kinds of n’anga whose duties are well defined and clearly understood.

First of all, we have the herbalist who we can liken to a chemist in the western world. He specialises in herbs which he sells to his customers. These herbs may be good or bad, but such a man is generally thought of as a good n’anga as long as he keeps his hands off the poisonous herbs.

Another type of witchdoctor is feared by all people. When he is cross and points a finger at somebody, anything could happen to that person. This witchdoctor can be hired to strike a house with lightning and it is believed this lightning can only work if the person upon whom it is directed, deserves it. Otherwise it bounces back up on the hirer. This n’anga is bad and lives among the people only because he is feared by everybody and if anybody tried to harm him he would inflict pain on him with his magic. Men have been known to visit such witchdoctors after having divorced their wives. A man would obtain a piece of his wife’s dress  strips and give it to the witchdoctor who uses it to harm the wife.

There is another kind of witchdoctor who specialises in protective and harmful magic. The magic he sells can protect a person from evil and at the same time harm the one who sought to endanger him. If I find out that somebody hates me and intends to harm me then I will rush to this kind of witchdoctor and put my problem to him and, for an agreed amount of money, he will give me some magic to protect me and my family. If this enemy used his magic against me, it would bounce back and harm him.

The other kind of witchdoctor is the one who casts bones. i.e. pieces of wood specially made for telling the unknown. If a man died of a sudden illness, which the relatives suspect to be the result of witchcraft, they go to an n’anga who casts his bones and names the witch responsible. This person would then have to be sent out of the village. But the n’anga must be very sure of what he is saying, because the so-called ‘witch’ may deny the allegation and enlist the support of another n’anga. He may be sent away or become unpopular with local customers.

Witchcraft in times past was declared illegal and subject to heavy penalties under The Witchcraft Suppression Act, Chapter 50. 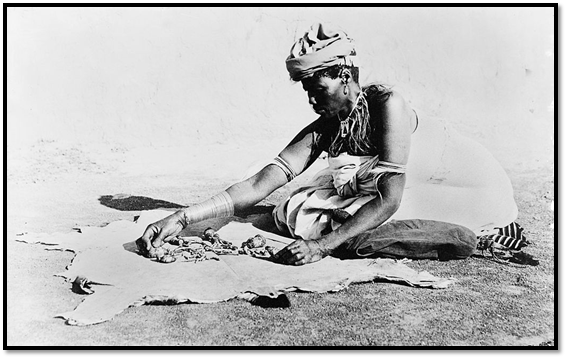