The Memorial plaque at the entrance to the Pioneer Cemetery reads:

SACRED TO THE MEMORY OF

AND TO TWELVE OTHER

The grey iron crosses of the twelve unidentified victims just say AN UNKNOWN PIONEER DIED 1892 OR 1893. 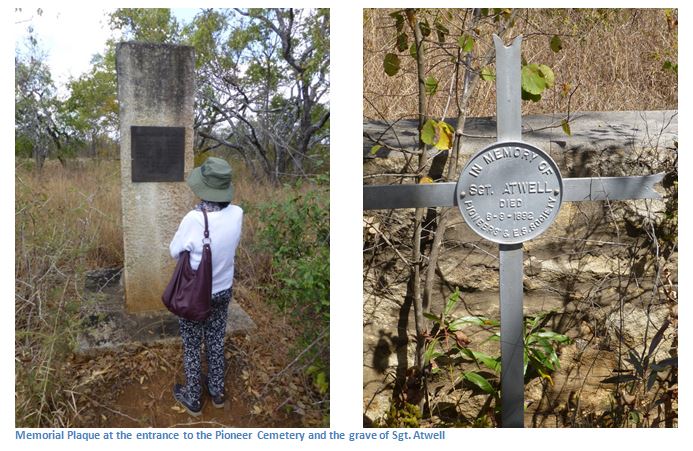 The Pioneer Cemetery lies just three kilometres south west from the original site of Fort Victoria which is on Clipsham Farm. Although the second Fort Victoria is a National Monument (No. 17) apparently with the original walls of the mud fort still standing, I was not able to gain access to the site.

I have only been able to trace the name of Trooper J.S. Carnsew (BSAP No. 828) who Hickman thinks may be a Cornishman from his name. He attested on 30/05/1891 and was discharged at the Fort Tuli depot on 06/01/1892. A.S. Hickman mentions that he died on the 06/09/1892 on the same day as three others: McCantyre, Sgt. Atwell and Phelps, but unfortunately does not mention the circumstances of their deaths.

The unnamed grave may possibly belong to transport riders, or BSA policemen who were responsible for the mail services and stationed at the postal relay stations at distances of 40 miles (65 kilometres) apart and delivered the mail on horseback. The despatch riders were superceded by a bullock cart service in 1891, which in R.C. Smith’s words ran more or less irregularly, and this in turn gave place, in June 1893, to a mule coach service run by Doel Zeederberg between Salisbury (now Harare) and Pietersburg (now Polokwane) and Bulawayo and Mafikeng. 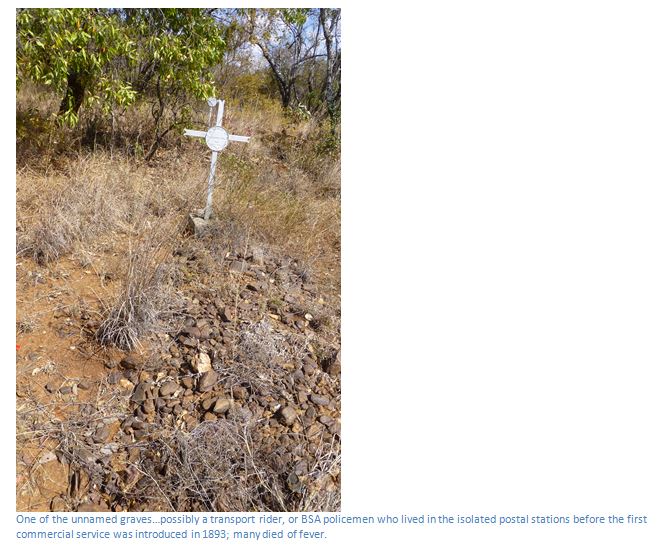 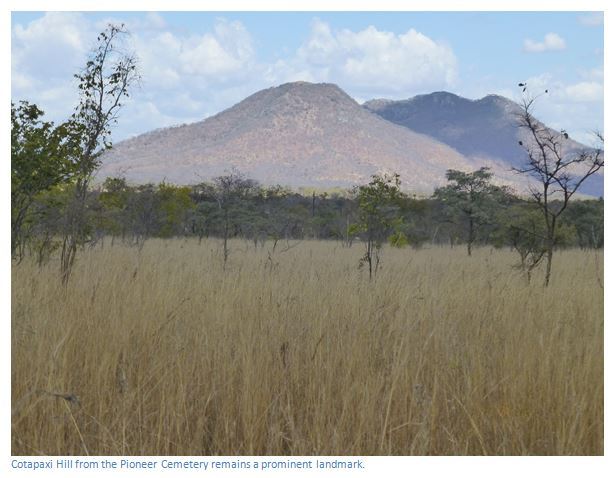 At the top of Providential Pass on the Masvingo – Beitbridge Road (A4) is the memorial for the safe passage of the Pioneer Column.  Frederick Courteney Selous, the intelligence officer for the Pioneer Column had set out to scout a route northwards from the Runde River for the one hundred and seventeen ox-wagons of the Pioneer Column. The long and difficult ascent began on 13 August 1890 and by noon the next day, the first of the ox-wagons had emerged onto the plateau which marked the successful passage from the heat of the lowveld into the comparative cool of the Highveld.  Frank Johnson says the name was suggested by C.F. Harrison, First Administrator Archibald Colquhoun’s secretary, because its discovery right on the path of the Pioneer Column was so providential. The Pioneers build a fort some distance from the Pass and name it Fort Victoria, but it was abandoned quite quickly with a second fort being built just six kilometres away on Clipsham farm. But the water supply proved inadequate and the third town of Fort Victoria (now Masvingo) was laid out in its present site in 1892. The Providential Pass Memorial plaque has been stolen and the Memorial comprehensively wrecked with the surrounding area left pretty much a rubbish tip.

The following extract is from Rhodesia in 1890 by H.F. (Skipper) Hoste: August 13th. “We, 'B' Troop, after a cup of coffee each, left the laager just before dawn, crossed Fern Spruit, and began the ascent of the pass just as the sky was beginning to light up in the east. The bush was very thick and was interspersed with big trees, so hard slogging was the order of the day. We had hardly cut a quarter of a mile when we heard, by the cracking of whips behind us, that the column was on the move, and that we would soon have it treading on our heels. However we managed to keep ahead of it. About eleven o'clock the Colonel rode up. He congratulated us on the progress we were making, and asked me when we had had breakfast. I told him that we hadn't had it up till then and that unless he halted the column for a spell I didn't see how we were going to get any. He rode back and halted the column and we got our long delayed breakfast. As soon as we had swallowed it we pushed on again.

At about three o'clock I got a note from the Colonel telling me to halt at the first flat place that I came to, and clear space for the laager. As luck would have it we were just then at the very place that would answer, so we cleared it. I then marked out a pool in Fern Spruit, which was running alongside our road, for drinking water, and told my crowd that if they wanted to bathe they could bathe in the pool below it, which they did. However some busybody told the Colonel that they were bathing in the drinking-water pool; then the band began to play.

The next morning we were off again at dawn, and at 8 a.m. we emerged from the pass on to the high veld. The first things that caught our eyes were two large white patches that looked like snow, but which turned out to be nitre, if I remember right. Our relief on leaving the hot steamy low veld, where for months we had seldom been able to see for more than two hundred yards round us, and arriving on the open veld with a cool, invigorating breeze blowing, may be imagined.

We laagered about a mile from the pass, and a spot was selected on which to build a fort to guard the pass. The fort was to be named after Her Majesty Queen Victoria.”

From a press clipping at the University of Strathclyde Archives collection it appears that the Providential Pass Memorial was unveiled by Sir John Kennedy (Southern Rhodesia Governor 1947-1053) on 15 July 1950 - unfortunately the original plaques are now stolen. 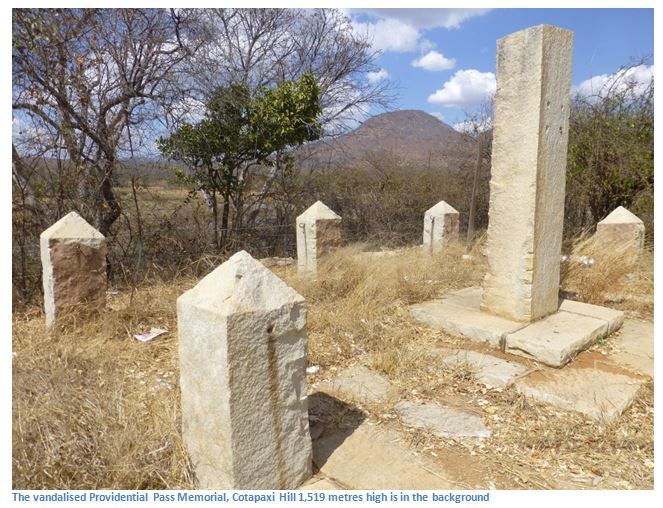 When to visit:
All year around
Fee:
None
Category:
Historic
Province:
Masvingo