National Monument No.:
74
Why Visit?:
How to get here:

Distances are from the dam wall of Lake Mutirikwi (formerly Lake Kyle) Take the tar road east (i.e. away from Great Zimbabwe) on Murray McDougal Drive, 4.8KM continue past the turn-off to the right, 18 KM turn right onto a gravel road, 22.4 KM turn left onto a narrow farm road, 22.7 KM cross a stream bed (note this requires high clearance and in the rainy season probably 4WD) 23.1 KM park, the rock site is in the small kopje on the right.

From the A9 travelling to Birchenough Bridge, distances are from the railway crossing past Masvingo. 3.0 KM pass the turn-off for the Italian Church. 12.0 KM pass the turn-off to Lake Mutirikwi National Park, 28.8 KM turn right onto gravel road for Chamavara Cave, the road gets a very dusty red crossing the iron-rich hills of the Beza Range, 43.8 KM turn left onto smaller gravel road, 48.2 KM turn left onto a narrow farm road (as described above)

Henry Breuil often referred to as Abbé Breuil, wrote over six hundred publications illustrating many with his own copies of cave paintings and engravings and is well-known for introducing the caves of Lascaux and Altamira in southern France and northern Spain to the general public. He made three visits to Southern Africa in 1929, 1942 and 1947 visiting many parts of South Africa, Botswana, Namibia, Zambia, Lesotho and Zimbabwe. It is no exaggeration to say he was captivated by the rock art he saw, describing this period as "the most thrilling years of my research life" and undertook three expeditions to Namibia and Zimbabwe between 1947 and 1950.

Abbé Breuil returned to France in 1952 and produced a series of publications sponsored by the South African Government which contained valuable photographs and sketches of the sites he visited, but are flawed by the elaborate scenarios he attributed to "white" artists.  In 1953 he announced his discovery of a painting about 6,000 years old, subsequently dubbed "The White Lady" under a rock overhang in the Brandberg Mountains of Namibia and a theory that it had been painted by Egyptians, or some other Mediterranean people, who had improbably made their way thousands of miles into the Namibian mountains.

In 1966, in collaboration with Mary Boyle, he published Volume Five of The Rock Paintings of Southern Africa which covered Zimbabwe and the Masvingo district and which continued the improbable theme that an ancient tribe of Europeans that once inhabited Africa had painted the art; an interpretation that was not accepted by most contemporary archaeologists. It did not seem implausible to Breuil that the Minoans, a Bronze Age civilisation that arose on the island of Crete and flourished from 2700 to 1450 BC, left no other traces of their passage than the rock art paintings.

He ignored the signs that the rock paintings represent the lifestyle of the San hunter-gatherers of the region. Local archaeologists were sceptical, but were reluctant to argue openly with one of the world’s foremost rock art researchers. 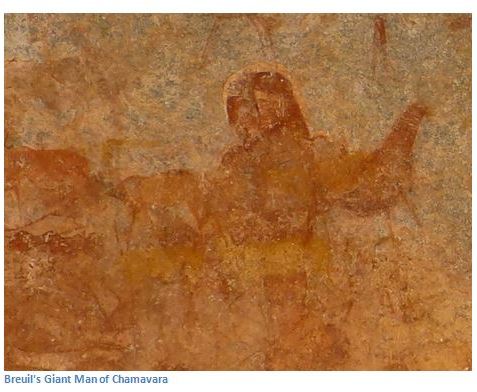 The figure’s head is outlined in white paint, with white lines and shapes drawn within the facial area. Henri Breuil speculated on the figures’ features; he saw an “Arab” veil and headband over a metal headband and visor, rolls of cloth around his body and “baggy trousers” with pointed “Hittite” shoes and thought the figure was “proto-Semite” or “proto-Ethiopian” of the time of Abraham. 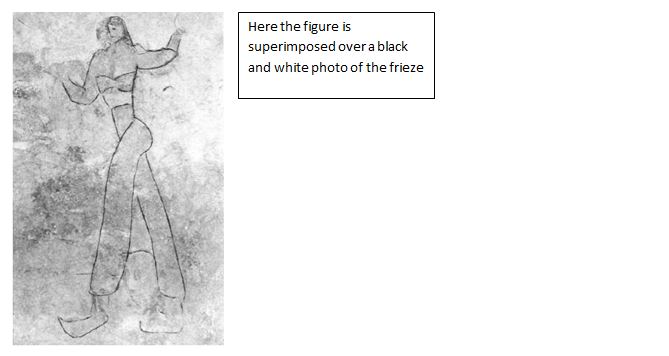 In some of the more far out websites the figure is sometimes described as “the Woman of Chamavara” and pale skinned with long-flowing red hair in Arabic or Indian dress wearing trousers and choli (or breast jacket) and wearing pointed slippers.  At other times it is described as “the Great man of Chamavara” and wearing baggy pants, pointed shoes, possibly shoulder armour and a helmet very similar to those worn by the Greeks. Close inspection of the photo shows what looks suspiciously like two antelope facing different directions at shoulder height (or just about where the shoulder armour would appear!) 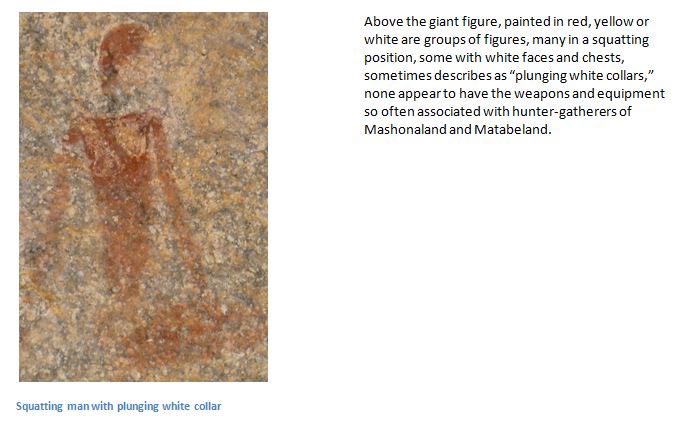 The lower parts of the frieze have fused into a confusing mass of paint in which it is difficult to distinguish any detail, although animal outlines are discernible and the colour is clearly composed of paint. Lower still; the frieze looks as though it was rubbed away when cattle were kept in the shelter. This is further evidenced by the remains of stone wall enclosures at the entrances, nearby is the remains of Shona grain bins.

It is surprising that the Abbé Breuil did not spot the shards of stone chippings, remnants of tool making, which are still just a few metres away at the base of the kopje and recognize the connection with the San Late Stone Age hunter gatherers  who created the rock art frieze he studied. Many years later on the same spot, Shona ironsmiths left evidence of their furnace sites in the form of iron slag. Ask the farmer / caretaker to show you.

Other sites in the Masvingo locality, such as Dengeni Cave in the Zaka area and Rumwandi Rock Shelter (formerly called Impey’s Cave) have not been described as they are rather remote for the majority of visitors and entail travel over rough roads.

When to visit:
All year around Monday to Saturday 8am to 5pm
Fee:
Entrance free, but if a local guide shows you the route, they should be rewarded with a donation
Category:
Rock Art
Province:
Masvingo