Home > Mashonaland West > Painted Wolf; How did one of Zimbabwe’s most endangered wildlife species acquire so many names?

Painted Wolf; How did one of Zimbabwe’s most endangered wildlife species acquire so many names?

Painted wolves are neither wolves nor dogs, despite their common English names, but they do all belong to the Canidae family with grey wolves, coyotes, dogs and jackals all in the Canis genus, whereas painted wolves are the only living species in the Lycaeon genus.[i]

Although defined by the World Wildlife Fund as endangered in Africa,[ii] they are thanks to last minute efforts from a number of dedicated individuals and conservation organisations and the support of Zimbabwe Parks and Wildlife Management Authority (Zimparks) at least maintaining their numbers in Zimbabwe and can be encountered fairly frequently at Gonarezhou and Hwange National Parks, Mana Pools and surrounding Safari areas and the Save Valley Conservancy.

Fortunately in Zimbabwe we have some dedicated conservationists and passionate supporters of the painted wolf. Lin Barrie, the wildlife artist and partner of Clive Stockil, is one such person. She has an intimate knowledge of the south-east corner of Zimbabwe including the Save Valley Conservancy, the Gonarezhou National Park and the Malilangwe Wildlife Reserve. See some of her inspiring artworks on https://wineandwilddogs.art

Another of their passionate supporters and their most ardent photographer is Nicholas Dyer who in his 2018 article What’s in a name? Dogs or wolves, painted or wild in Africa Geographic (https://africageographic.com/stories/whats-name-dogs-wolves-painted-wild) wrote that the species is only very distantly related to a wolf or a dog and from a different genus in the Canidae family. He explains that the best translation for Lycaon is ‘wolf-like’. And pictus is simply the Latin for ‘painted’. Hence ‘painted wolf.’

Nicholas points out that although they share many physical characteristics with wolf and dog, there are important differences, and they are only very distantly related. Lycaon only has four toes on its front feet and no dewclaw. Also, the arrangement of their teeth is completely different from a wolf or a dog. So, anatomically to them ‘dog’ or ‘wolf’ is not correct either and there is no possibility of their interbreeding.

Nick Greaves in his book When Hippo was Hairy and other tales from Africa tells an Ndebele story explaining why the African wild dog hunts in packs. In the beginning, when the first wild dog's wife was sick, the other animals were concerned. An impala went to Hare, who was a medicine man. Hare gave Impala a calabash of medicine, warning him not to turn back on the way to Wild Dog's den. Impala was startled by the scent of a leopard and turned back, spilling the medicine. A zebra then went to Hare, who gave him the same medicine along with the same advice. On the way, Zebra turned back when he saw a black mamba, thus breaking the gourd. A moment later, a terrible howling is heard: Wild Dog's wife had died. Wild Dog went outside and saw Zebra standing over the broken gourd of medicine, so Wild Dog and his family chased Zebra and tore him to shreds. To this day, African wild dogs hunt zebras and impalas as revenge for their failure to deliver the medicine which could have saved Wild Dog's wife.

Painted Wolves have had a poor press

In many of the 19th Century hunting books you will read of their authors shooting Painted Wolves without a moment’s hesitation. Their numbers are estimated to have reduced from 500,000 to 6,600 in less than a century[iii] as they were considered to be vermin and harmful to both domesticated animals and game. In fact, their slaughter was encouraged by the authorities who placed bounties on them.

In Southern Rhodesia (now Zimbabwe), a five-shilling bounty was paid provided proof was supplied in the form of: ‘the skin of the animal with the tail not severed’ and it was produced ‘within three months of the date upon which the animal is killed.’ This practice continued from 1916 to 1977 throughout Southern Africa in varying degrees. 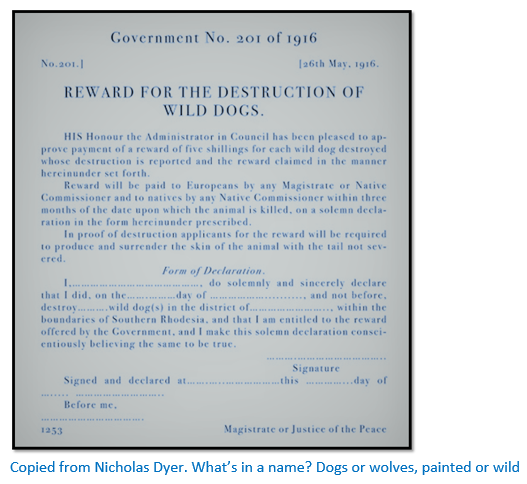 Should they be called ‘Dogs’ at all?

Nicholas Dyer argues that the name dog implies that the animal has become feral – that it escaped from a village kraal and has gone wild – and nothing could be further from the truth. In Southern Africa and even India, the words feral and stray have negative associations with the threat of rabies and inspires a form of dread in many people. Clearly the name ‘wild dog’ has very negative associations.

Calls for a rebrand

Anyone who has watched a group of these intensely social and integrated adults playing with their pups comes to love their joyful and charismatic ways. Many of Zimbabwe’s safari operators and conservationists say that locals and tourists are getting to know the painted wolves as skilful hunters and as amazingly social animals that are a joy to watch in the wild.

Nicholas Dyer is in favour of them being called painted wolves rather than wild dogs and remembers Sir David Attenborough’s BBC documentary series Dynasties, which features the same painted wolves packs filmed at Mana Pools National Park in Zimbabwe as are featured in the book he has co-authored with Peter Blinston called Painted Wolves: A Wild Dog's Life which took six years to produce.

Peter Blinston runs the well-known Painted Dog Conservation which has been credited with great success at both Hwange and Mana Pools National Parks in Zimbabwe. There is no better source for amazing photos of the playful and social interactions of these packs.  The book’s profits have all been donated to the Painted Wolf Foundation.

Their conservation, not their name is the important objective

Nicolas Dyer says many wildlife and conservation organisations are sticking with their existing names. The Painted Dog Conservation will not be changing their name and the African Wildlife Conservation Fund and the IUCN are not going to stop calling them African wild dogs. Despite this, these organisations will all work together in an effort to stop the snaring, disease and road kills that are inflicted on painted wolves and the present and future risk to their habitat as human populations encroach more and more on wildlife habitat.

In the 14 July edition of Africa Geographic is an interesting article called The science behind rebranding wild dogs which features research carried out by the ecologist Bryony Blades enquiring into whether their name ‘wild dogs’ has contributed to their historic persecution as blood-thirsty and brutal hunters. She investigated previous scientific articles and carried out online public surveys using photos paired with the different names for painted wolves including African wild dog, painted wolf, African hunting dog, or Cape hunting dog. People were willing to donate to any of these animals irrespective of their names.

In a second survey using word association  respondents were asked to associate the words  ‘hunting,’ ‘wolf,’ ‘wild,’ ‘dog,’ and ‘painted’ with another word and the responses were judged as either being negative or positive or neutral. Responses to the word ‘hunting’ were negative, but responses to the words ‘painted’ and ‘wolf’ were largely positive.[iv]

Overall the author of the surveys, Bryony Blades, concluded that the phrase ‘painted dog’ triggered the most positive word association, and this is important information for conservationists and wildlife organisations whose aim is to protect this endangered species and who need to raise donations to fund their efforts.[v] 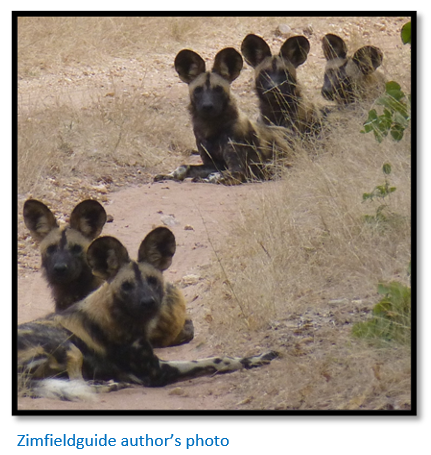 Facts and figures about painted wolves

One of the most endangered mammals, the largest population is in Southern Africa with scattered remnants in many African countries. Wikipedia estimates there are about 6,600 adults, including 1,400 mature individuals, although hopefully with the enhanced public interest they will benefit from increased conservation measures and their numbers will grow giving painted wolves a more promising future. 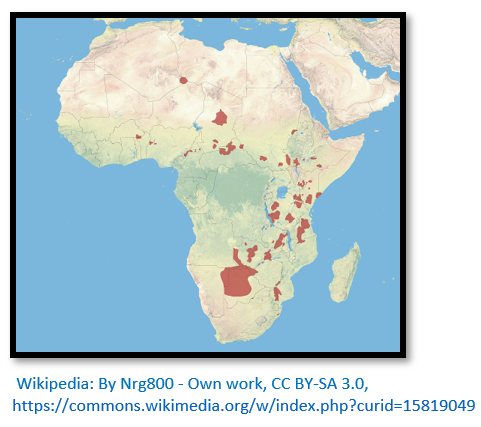 Major threats to their survival include accidental snaring by poachers hunting for bushmeat and targeted killings by humans, viral diseases such as rabies and distemper, increasing habitat loss and competition with larger predators like lions.

One of the major ways to mitigate their loss is creating protected areas with wildlife corridors between the major game reserves which avoid contact with humans.

They have a lean and tall build, with outsized ears and unlike dogs have four toes instead of five and lack dewclaws. In the wild they generally live about 7 years. For short periods they can sprint at 70 kph (44 mph) and their trademark large circular ears help with dealing with heat stress. In height mature adults are approximately 76 cms high (30 inches) and weigh 18 – 32 kgs (40 – 70 lbs) and are 76 – 142 cms (30 – 56 inches) in length.[vi]

They are great team players and being extremely sociable animals, they live in packs numbering from about 10 to more than 40 in number based around a den where the pups are guarded. When hunting the lead painted wolf will first grab their prey with the following team members quick to drag the prey animal to the ground and finish the kill.

Each pack has a dominant alpha male and alpha female pair who are the only ones to produce litters of between 4 to 12 pups. Occasionally non-alpha females produce litters, and the pack may, or may not, accept them.

All the pack help with the young pups which are vital for the next generation, they will bring back meat from the hunt and regurgitate it to feed pups or injured individuals and pregnant females.[vii 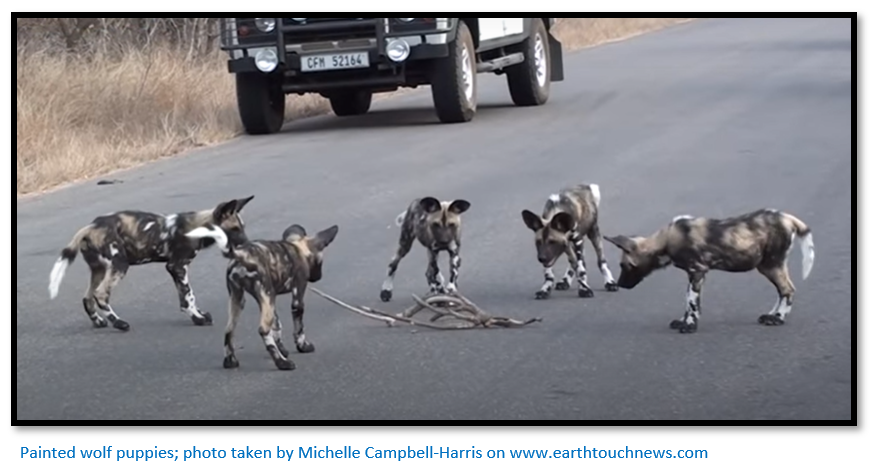 Very opportunistic, they will eat most mammals including small rodents and hares, they mainly hunt smaller antelope such as dik-dik, impala and Thomson’s gazelle, but will take on larger antelope such as kudu, nyala and common wildebeest. By keeping down the numbers of hoofed mammals (ungulates) they help regulate overfeeding and habitat destruction.

They often hunt singly or in pairs flushing out small mammals from woodland undergrowth and chasing them down. Smaller prey are ideal for this type of hunt which would not go far amongst the pack. They known through video film for chasing larger prey over long distances with tired individuals being replaced by other individuals in the pack and eventually bringing their exhausted quarry to a stop before going in for the kill.

Their method of killing prey by tearing them apart has added to their poor reputation, but their kills are quick and efficient and eaten rapidly before larger carnivores such as hyenas and lions steal their prey.

They hunt mostly in the day possibly to avoid confrontation with nocturnal hunters such as lion, leopard and hyena. 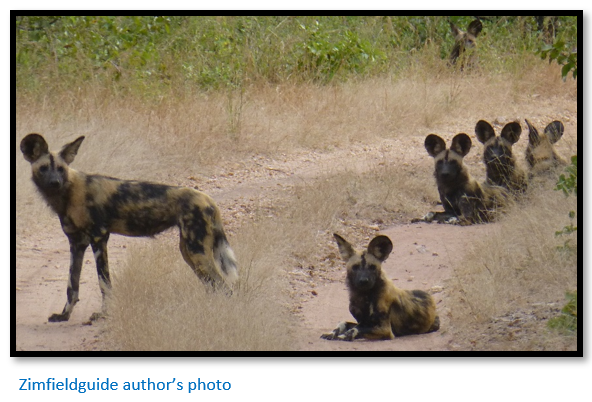 Nick Greaves. When Hippo was Hairy and other tales from Africa. Bok Books, 1989

[iii] What’s in a name? Dogs or wolves, painted or wild

[v] The full paper can be accessed is: “What’s in a name? An evidence-based approach to understanding the implications of vernacular name on conservation of the painted dog (Lycaon pictus)”, Bryony Blades, (2020), Language & Ecology