Nyaminyami, the River God, is central to the cultural beliefs of the Tonga people.

Nyaminyami Observation point is on the south bank of the Zambezi River in Kariba town and on the heights above the dam wall.

The isolated world of the Tonga people was torn apart from 1956 when the Governments of Northern and Southern Rhodesia (today’s Zambia and Zimbabwe) decided that the Zambezi River should a the major source of hydro-electric power for both countries. The Tonga were told they would have to leave their traditional homes on the valley floor as they would be flooded by the rising waters and would be relocated on higher ground, far from their villages on the Zambezi River and where once they had lived mainly from fishing, they now had to learn to survive by growing crops. They moved, twenty two thousand on the Zimbabwe side and twenty nine thousand on the Zambian side, but most believed Nyaminyami would soon cause havoc.

The Nyaminyami River God is a major force in the society around the Zambezi Valley. He is believed to have supernatural powers and local people living the Zambezi Valley for many centuries under the care of their River God believed he would ensure a supply of food and water and protect them in troubled times. .  Nyaminyami is often described as having the body of a snake and the head of a fish, or river dragon and may be seen on carved walking sticks sold in the curio shops. 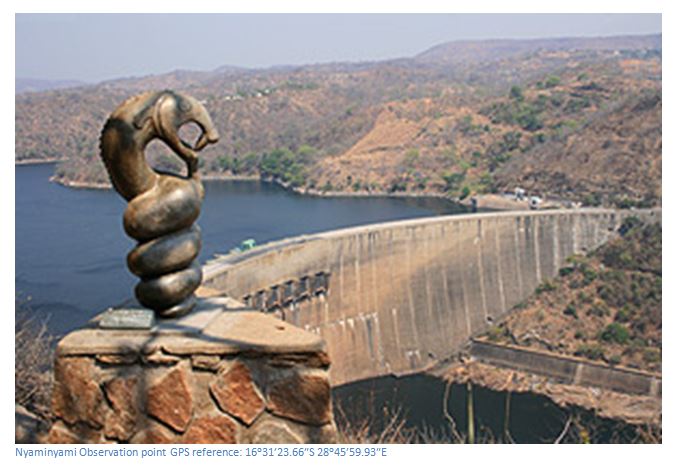 When they heard of the plans to dam the Zambezi River, the local BaTonga people said the River God would not approve as Nyaminyami had lived upstream with his wife on the Zambian shore, but the construction of the dam wall would separate them and he would destroy the wall in revenge.

In 1957 the worst floods ever known washed away the foundations causing the collapse of part of the wall and in the process drowned both local and Italian construction workers.

1958 brought even worse floods (on a scale of once in a thousand years) destroying the coffer dam, the access bridge and the existing walls.  Eleven Italian and local workers were drowned, their bodies were not recovered and remain within the concrete walls. Local people believed the wall had infuriated the River God Nyaminyami, and as he forced his way back upstream he caused the floods and the wall to collapse and had taken his revenge.

However, quite frequent earth tremors are felt in the Zambezi Valley and the Tonga people believe that Nyaminyami and his wife are still separated by Kariba Dam wall and that the tremors are caused by Nyaminyami trying to be united with his wife and when he can't get through the dam he turns around with such fury that the Earth around Kariba shakes.

Kariba locals and visitors look forward to September each year as the Nyaminyami Festivals are held to venerate the River God.