There is a still a big demand in Asia for elephant ivory, rhino horns and pangolins for their purported medicinal properties and as speculative investments. The Malawi authorities believe Yunhua Lin has been operating in Malawi as the boss of a notorious wildlife syndicate called the ‘Lin-Zhang gang’ dealing in the products of poached animals from Mozambique, Tanzania, Zambia and Malawi for at least a decade.[i]

Yunhua Lin was arrested in August 2019 on charges of money laundering and the illegal possession of protected wildlife and has been in custody ever since during which time he changed his legal representatives at least four times. 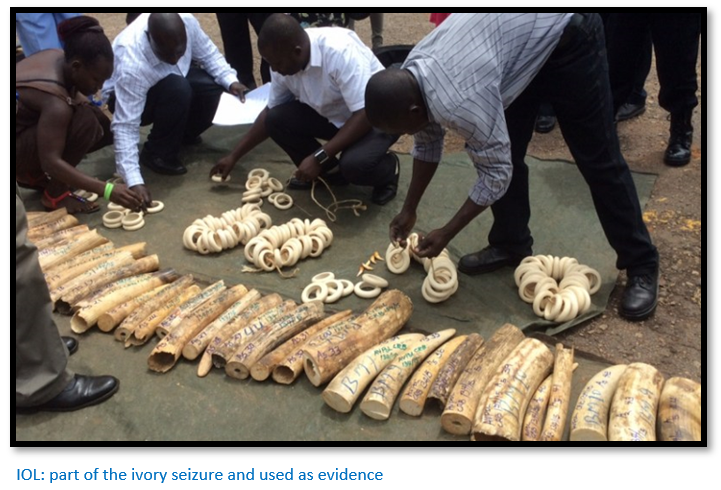 Other members of one of Southern Africa’s most active wildlife trafficking gangs were sentenced by a Malawi court to a total of 56½ years’ prison time. They were all former members of the Lin-Zhang gang and each was found guilty of at least one wildlife trafficking offence of a listed or protected species – pangolins, rhino horn, ivory or hippo teeth.[ii] They were arrested in a series of coordinated raids in May 2019. All have denied the charges.

The sentences handed down at the Senior Resident Magistrate’s Court, in Lilongwe, were:

Other members of the gang already sentenced in May 2019 included:

Chinese national Shine He has pleaded not guilty to possession of ammunition and explosives; his trial continues. Lin Hui Xin – the daughter of Lin and Zhang, who is married to Li Hao Yaun, currently serving 11 years for syndicate-related crimes – was arrested in December 2020 for alleged money laundering offences. She is the 16th member of the syndicate to be arrested and her trial is ongoing.

Lin’s accomplices Li Hao Yuan and his wife Quin Hua Zhang were jailed for 11 years for the illicit possession of rhino horn and firearms. Authorities believe they had been carrying out their illegal activities in Malawi for at least a decade. Yunhua Lin was arrested in August 2019 alongside Malawian national James Mkwezelemba following a three-month manhunt by the authorities.[iii] 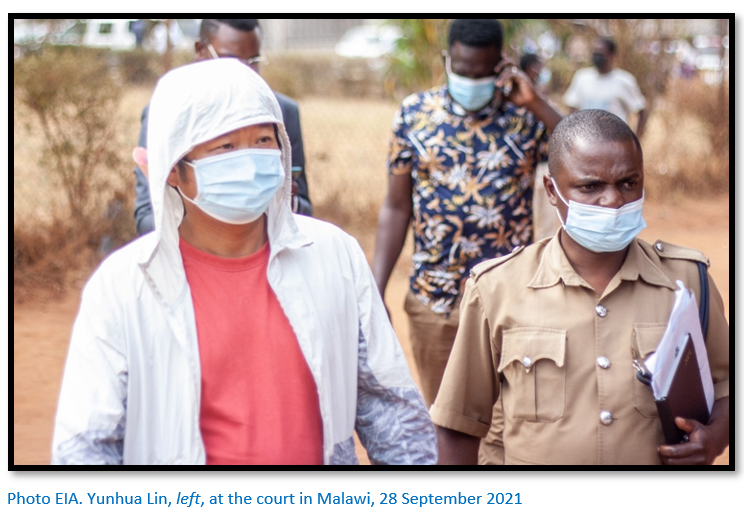 In court on 28 September 2021, Yunhua Lin was sentenced to 14 years for dealing in rhino horn, 14 years for possession of rhino horn and six years for money laundering; the sentences will run concurrently, so he will serve a total of 14 years. He will be deported back to China on completion of the jail term.

In her statement, High Court Judge Justice Violet Chipao highlighted aggravating circumstances, in particular Lin’s conduct in absconding from justice for three months, as well as the evidence that pointed to his role as gang leader.

She also emphasised that the traffickers were encouraging poaching and therefore needed to receive a more serious punishment than poachers as a deterrent, stating: “The pieces of rhino horn came from not one but five different rhinos … what’s more, the court feels that Mr Yunhua Lin was a mastermind as he owns all the properties where specimens were found.”[iv]

Mary Rice, Executive Director of the Environmental Investigation Agency (EIA) said:  “We’re very pleased to see this notorious wildlife crime kingpin finally face the music with a stiff sentence of 14 years in prison and trust that it sends a crystal-clear message to other wildlife criminals plundering Africa’s natural resources that they are not beyond the reach of the law. I believe today’s judgment and the destruction of the Lin-Zhang gang will prove to be a pivotal moment in Malawi’s commitment to bring high-level wildlife criminals to justice.”[v]

Lin’s sentencing brings the total of Lin-Zhang gang members sent to prison to 14; 10 Chinese and four Malawian nationals have received jail sentences for a variety of offences related to the possession of firearms and protected or listed species, including pangolins, rhino horns, hippo teeth and elephant ivory.

Elephants have suffered a 20% decline in numbers

In 2006 the estimated elephant population was 556,973 but by 2015 the Great Elephant census estimate was for 413,242, a decline in the elephant population of 26%. Malawi’s neighbour Tanzania suffered one of the worst declines losing 63% of its elephants as they fell from 135,853 to 50,533 - the Selous and Ruaha reserves in Tanzania alone declined by nearly 75,000 elephants. The World Wildlife Fund estimates that as much as 60% of all elephant deaths can be blamed on poaching.[vi] 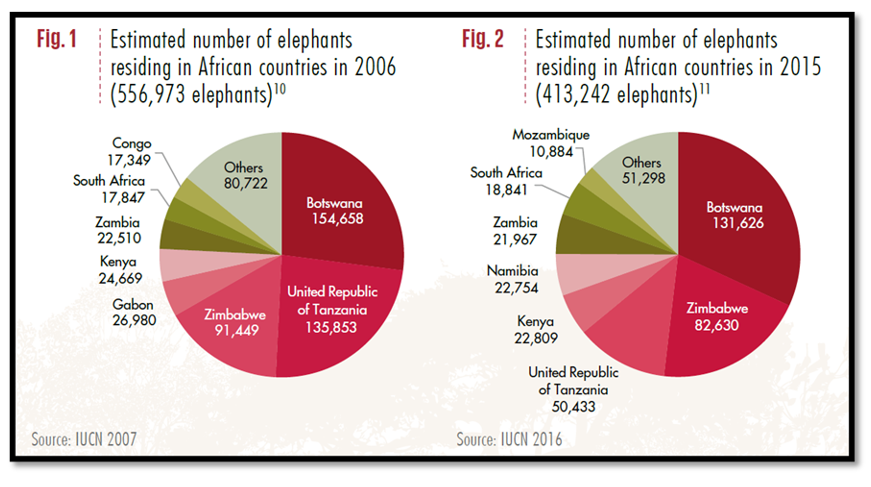 This graphic from the article World Wildlife Crime Report – Elephant Ivory under Masvingo on the website www.zimfieldguide.com

Malawi's Director of Parks and Wildlife, Brighton Kumchedwa praised his teams for their increasing arrests and desire for successful prosecutions of wildlife trafficking offences as well as strengthened legislation to underpin these efforts. In thanking all the stakeholders who took part in seeing successful prosecution of this landmark case he added:  “It is critical that wildlife criminals can expect to feel the full weight of the law and the message needs to be loud and clear: Malawi is no longer a playground for the likes of the Lin-Zhang syndicate that exploit our natural heritage, damage our economy, incite corruption and pose a risk to national security. This is indeed a victory for Malawi – and a victory for wildlife in particular.”[vii]

“Following years of concerted efforts and overcoming countless obstacles, this small nation has demonstrated how, with political will and determination, to dismantle one of Africa’s most prolific organised international crime syndicates. Fighting crime on this scale demands sophistication, collaboration, courage and tenacity. Malawi should be immensely proud – and other African countries currently battling the scourge of illegal wildlife trade would do well to follow this example of global leadership.”[viii]

Pangolins are the most trafficked mammals in the world

Many of the gang that were arrested were charged with possession of live pangolins or pangolin scales. Every single day, hundreds of pangolins are poached in the wild to have their bodies carved up for meat and their scales pulverised for mythical medicines. At the rate they are disappearing they will soon be driven to extinction.

Below the Malaysian Customs authorities who thwarted another attempted smuggling of endangered animal products through its Kuala Lumpur International Airport. Officials said that 75.74 kilograms of ivory, worth 275,000 Malaysian Ringgit, and 300 kilograms of pangolin scales, worth 3,863,000 Malaysian ringgit, were seized at two separate locations within the airports free-trade zone warehouse. 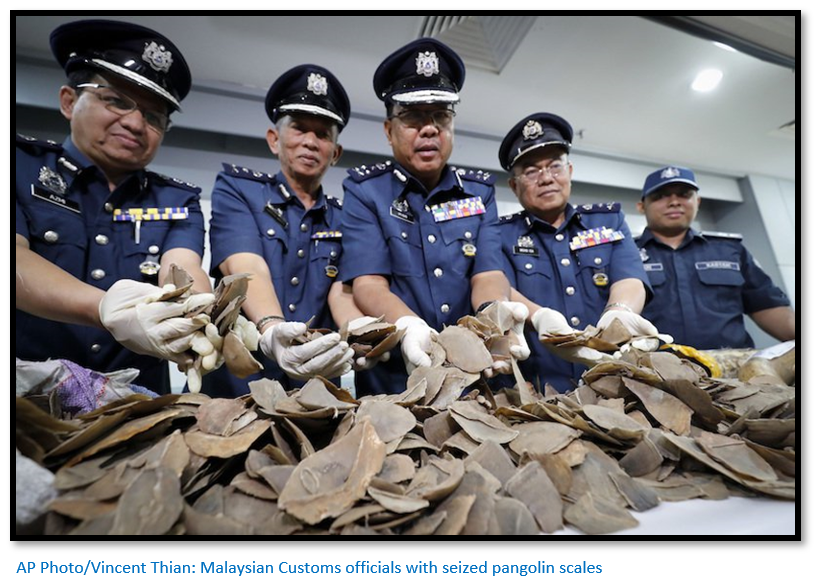