The severest drought in decades is threatening an estimated 45 million people in Southern Africa including Angola, Mozambique, Namibia, Zambia and Zimbabwe according to the international aid agency Oxfam and is causing extreme food insecurity among vulnerable communities who require help urgently in the form of emergency food deliveries.

Andrew Meldrum states that parts of Zimbabwe have had the lowest rainfall since 1981; this is  severely affecting up to 5.5 million people and follows the devastating cyclone Idai which struck Mozambique and Zimbabwe earlier this year destroying the ripening crops of maize and other staple crops of many poor communities, particularly in the east of Zimbabwe. [Source: Andrew Meldrum: Associated Press 8 November 2019]

In many of the affected communities the flooding followed by drought has resulted in competition for water resources with humans and animals, both livestock and wildlife competing for the same scarce resources of water and forage. This situation increases the risk of diseases and animal attacks. Tinashe Farawo, a ZimParks spokesman said at least 22 people had been killed this year by elephants. In October another farmer near Hwange National Park who tried to scare an elephant away from his land was the latest casualty. [Roland Oliphant, The Telegraph, 22 October 2019]

Zimbabwe’s Parks and Wildlife Management Authority (ZimParks) says the situation is taking its toll on wildlife – at least 200 elephants have died in the past two months at Zimbabwe’s Mana Pools National Park and the larger Hwange National Park. Weakened by hunger and thirst, the elephant in the photo below had hoped to reach the remaining muddy pool of water at Long Pool which had dramatically shrunk in the severe drought to around 5 per cent of its normal capacity, but its weight had caused it to get stuck in the mud. Mana Pools Wildlife Officers struggled to free the trapped animal, but finally it collapsed and died. 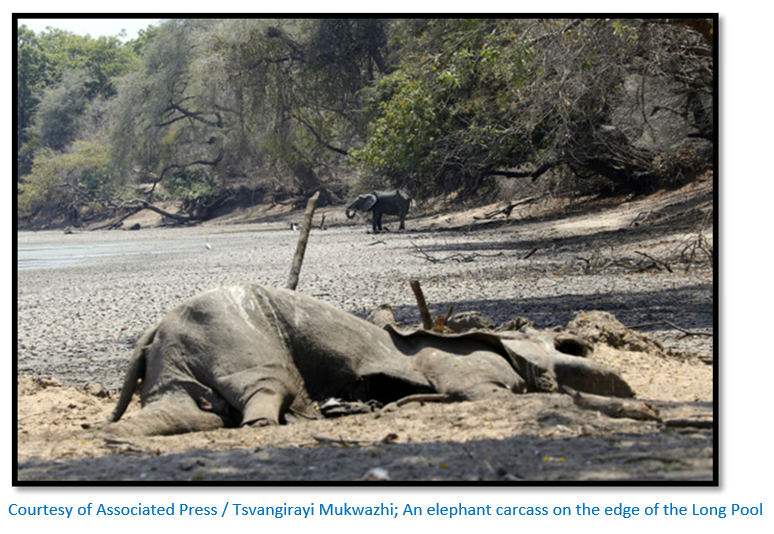 The situation for wildlife appears to be particularly dire at Mana Pools National Park, a UNESCO World Heritage Site, where many animals, large and small are dying from lack of water and food. Historically this National Park of  2,196 square kilometres was flooded each rainy season by the Zambezi river that filled the four pools of water to the south of the river which gave the area its name. “Mana” means four in the Shona language.

Large numbers of elephant (estimated numbers are 12,000) buffalos, zebra, kudu, impala and other antelope, hippopotamus and predators, including lions, hyenas and painted dogs and 350 varieties of birdlife thrived on the plentiful food and water. In the recent period there has been a succession of continuing droughts; normal rainfall has been received in only one of the five past growing seasons and this is causing many deaths and driving the animals out of Mana Pools.

Craig Chittenden a Wildlife Guide said: “The temperature is hitting 51C. There’s not a blade of grass left. I can’t count the number of animals that are dead or dying. They’re skin and bones.”

Even the Zambezi river, whose main water source is in the wetlands of the Mwinilunga District of north-western Zambia, near the border where Zambia, Angola and the Congo meet, has extremely low water levels this year [Wikipedia] The Times reports that water flow at the Victoria Falls has fallen to a record low – barely 100 cubic metres a second; one-sixtieth of the figure in 1977. [Will Brown 4, The Times, 4 November 2019]

ZimParks staff are hoping for rain, but even if it comes, it may be too late for many of the animals which have been left in a weak and emaciated state. Previous ZimParks policy has been to let nature take its course, but the scale of the potential loss has led to Wildlife Officers and Voluntary Organisations getting involved in an attempt to limit the loss of wildlife and to maintain the population density. Munyaradzi Dzoro, a ZimParks Wildlife Officer said: “We are now forced to intervene, which is manipulative conservation, because we are not sure when and how we will receive rain. To avoid losing animals we have to intervene to maintain population sizes.”

Another danger for the larger and heavier animals is that they are being forced to cross the soft soil and clay of the Long Pool, a five kilometres-long watering hole to reach the dwindling supply of water which has dramatically reduced due to the severe drought and in their weakened state they sink into the mud and are unable to extricate themselves. Dzoro, prays for rain. “It’s beginning to be serious,” he said, standing next to the remains of an elephant and buffalo that had become trapped in the mud: “It might be worse if we fail to receive rains by early November. The last substantial rains came in April” [Original story from Farai Mutsaka reported for Associated Press, then adapted by Pete Musto for VOA Learning English] 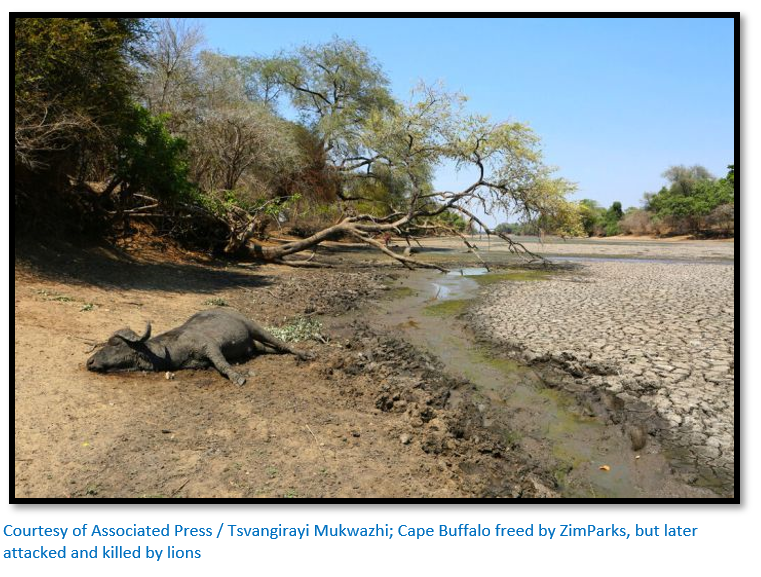 Not far away from the elephant, a Cape Buffalo had also been freed from the mud, but in its weakened state was attacked and killed by a pride of hungry lions. [Farai Mutsaka; Associated Press in The Columbian, published 8 November 2019]

Two of Mana’s pools have completely dried up, while a third has just 20 – 30 percent of its usual water and is shrinking fast. The hippos at Long Pool stay submerged in the little water remaining to stop their skin drying out in the extreme heat, whilst the marabou storks forlornly pick at the catfish carcasses stranded in the mud.

In July of this year, with insufficient natural supplies of acacia pods and grass the Feed Mana Drought Mitigation Program spearheaded by Vets for Animal Welfare Zimbabwe (VAWZ) began bringing forage for the animals into Mana Pools. Mel Hood, a spokesperson said: “Although it may not be enough to stave off all the hunger…it is certainly giving those animals a chance to survive until conditions improve.” The Feed Mana project has been requesting urgent donations of animal feed, including soya bean hay, molasses and grain cubes and grass.

Trucks and tractors have been carrying hay to various feeding points in the Mana Pools National Park with VAWZ saying they have transported 14,000 hay bales so far into the park as part of their animal welfare programme. 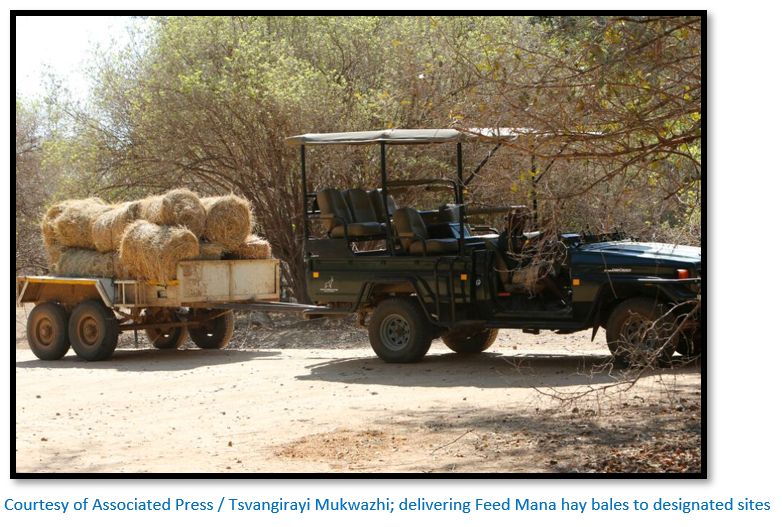 Zimbabwe has an estimated 85,000 elephant; their neighbour Botswana has 130,000 elephant and the wildlife authorities and voluntary organisations are struggling with the severe drought affected by climate change that has changed weather patterns. The usual 24 inches of rain (600 millimetres) has halved in recent years, even the perennial springs have dried up. [Farai Mutsaka; Associated Press in New York Post, published 6 November 2019]

But for poverty-stricken Zimbabwe which is at risk once again of hyper-inflation and suffering from daily power cuts and high unemployment, the added burden of the drought means it is becoming increasingly difficult to maintain the booming numbers of wild elephants. The country is campaigning to sell its ivory stockpile in spite of the global ban and to export live enfant elephants to raise money for conservation and to ease the congestion in the drought-affected national parks. [www.abc.net.au/news/2019-11-07] 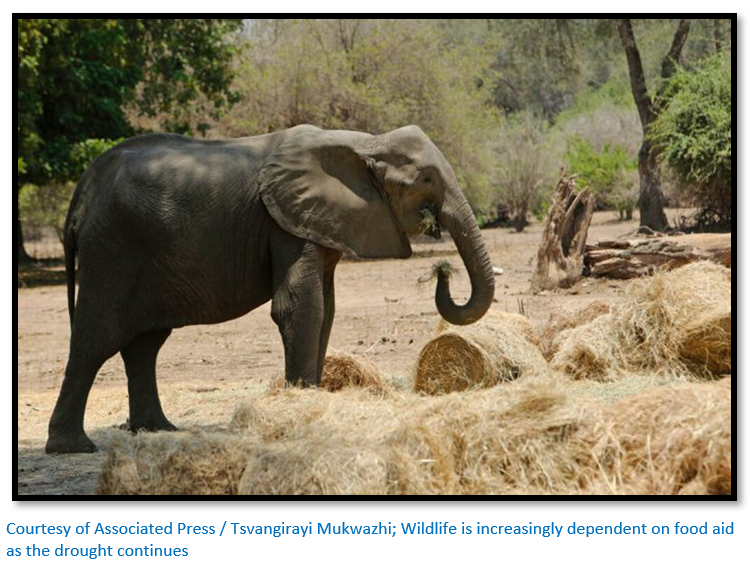 And of course to the multitude of compassionate individuals and companies who have donated. We are truly humbled by the indomitable Zimbabwean spirit, renowned for generosity even in the face of personal adversity. Thank you Zimbos – we really are an awesome community!

Below are details if you would like to help VAWZ deliver help to the wildlife at Mana Pools:

UK residents can donate by going to the website http://www.vawz.org/ and selecting the donate tab to donate using a credit card or PayPal.