From Harare take the A1 towards Chinhoyi.  Distances are from the A1 turnoff to Darwendale just after Nkomo Barracks. Turn left on to the tarred road to Darwendale, 21.3 KM pass through Darwendale village. 24 KM turn left onto an unsignposted narrow tar road becoming an untarred road leading to Kentucky Farm. 28.4 KM ignore untarred road to the right. [Note the kopjes on the right soon after the turnoff feature the Marengoa rock art site] 32.2 KM pass Mtotwe Store / Bowden Farm on your left, 40.5 KM pass Donington Farm on your left, pass Nicotina Store, 45.1 KM pass untarred road on your right, pass Kazanzi Farm on your left, 48.0 KM reach Kentucky Farm turnoff on your right shortly after passing a prominent gum tree. Take this unsignposted gravel track; 49.3 KM reach the tobacco barns on your left. Turn in and request permission to visit the rock art site. It is probably worth asking if there is a young guide to help you find the site. Continue on the track in a north-easterly direction across old tobacco lands. The track is indistinct and grass covered, but offers no problems for a high clearance vehicle. 50.5 Km ignore the track heading east and continue across the lands in a NNE direction, 50.7 KM follow the track in a NNW direction, 50.9 KM leave the more established track, for a lesser track going east, 51.1KM take the track going left at the fork, travelling ENE and then east. 52 KM park the vehicle. The site is in the wooded area about 200 metres to the south east and at ground level. Matari Hill trig point is marked on the 1:250,000 map and a few hundred yards to the south.

Although the frieze is protected only by a small overhang, this is one of the best sites in Zimbabwe for the quality of its art; perhaps the fact that it faces north-west protected it from the damaging effects of rain which is predominately from the east.

Dominating the centre of the frieze is a camp scene with seven hunter-gatherer couples and children depicted lying on skin blankets or grass, their shoulder bags with long tassels, gourds and weapons scattered about.  The artist used great technical skill painting the sleeping humans in solid-fill and using an artistic technique called hatching; that is using closely spaced parallel lines to depict the bedding. Note the children are shown in the usual convention of the art as simply adults, but on a smaller scale. A large group of hunters are drawn holding weapons, some are squatting and others bending over whilst they examine their arrows. Two appear to face each other and converse; others are depicted with their legs stretched widely apart as if running at full speed in head down fashion. Most are painted in solid-fill, although some on the right have their torso and legs painted in outline only. No women are featured, except those lying down in the camp scene.

The painting style throughout is identical as if the frieze was completed by a single artist, the legs are all short and muscular, the torsos long and curved with many of the figures depicted wearing head dresses. At the top is a large rhinoceros or hippo, the head obliterated by rain runoff down the rock face; tucked below its belly is the faint outline of a small rhinoceros with three arrows protruding from its belly. Most of the animals are female kudu with some zebra and two fish and a single root, or bulb is drawn. The frieze really is a striking tour de force, probably unique in Zimbabwe, not only for its technical detail and delicacy, but also because the artist has managed to include so much dynamic energy into the scene using just one colour of paint on a flat canvas of granite rock. 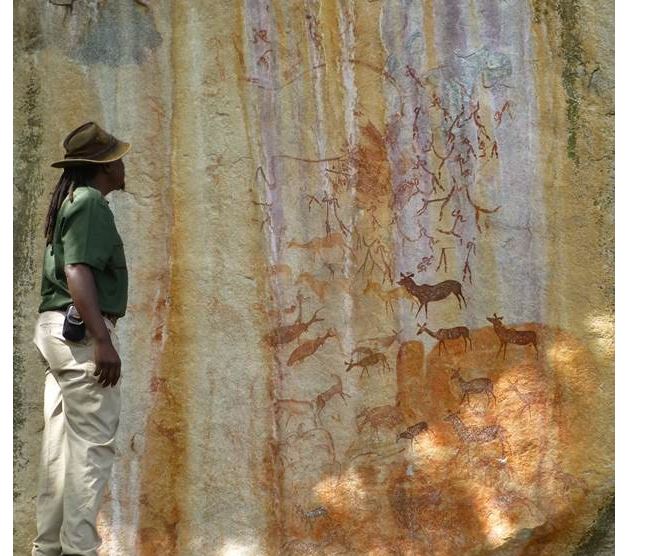 Research from South Africa has shown that the pain experienced whilst in a trance state is often shown in the rock art in the form of dancers crouching and kneeling or with their hands held rigidly behind their backs. There are a number of rock sites in the Trelawney / Darwendale area that show dancers bleeding from the nose whilst in trance and the association with fish has been interpreted as a metaphor to describe the sensation of drowning, or suffocation that San hunter-gatherers have experienced when going into trance. Fish are comparatively rare in painting; less than 2% in a 1983 study in this area by Tucker and Baird in the Journal of the Prehistory Society of Zimbabwe. Attenuated or stretched limbs have been described in various other entries describing rock art sites and this is a fairly common symbol illustrating symptoms of trance.

Another physical manifestation of trance drawn by the San artists is roundels on the biceps and semi-circular hoops around the neck. They are more commonly shown in the rock art of South Africa, but there is no doubt that the same symbols were recognized by the artists in Zimbabwe as part of the language of their art. The semi-circular hoops are very obvious in the painting of the trancer at Thetford Game Reserve described elsewhere; the roundels on the biceps of the hunters are evident at the Kentucky Farm site. Note also the unpainted lines up some of the torsos of the figures in the detailed section of the frieze below. This undoubtedly forms part of the vocabulary of the rock art and would have been understood by the artists’ audience to symbolize some of the physical characteristics of trancing. One figure shown on the larger photo just above the prominent female kudu comprises just legs with a horizontal paint stroke depicting the torso. This figure carefully and deliberately drawn is not incomplete; but is a portrayal by the artist of another aspect of the sensations trancers say they experience whilst in trance and would also have been well understood by their audience. 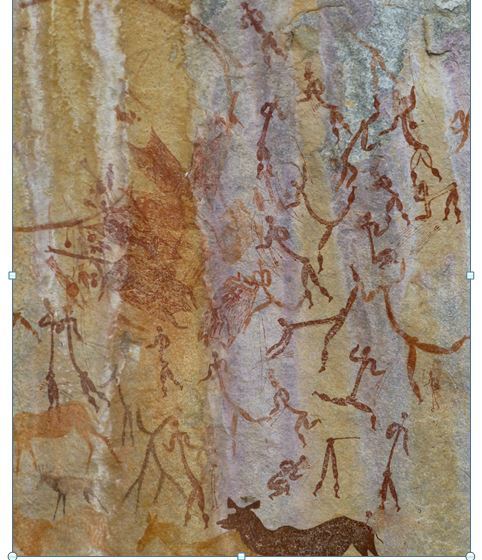 When to visit:
All year around
Fee:
None, but a small donation if you are guided to the site
Category:
Rock Art
Province:
Mashonaland West