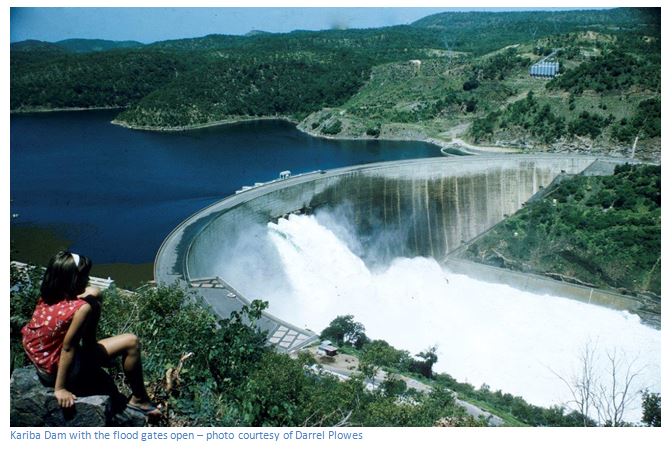 The concrete arch dam is 128 metres high and 633 metres along the crest. For many years the site on the Zambezi River had been recognized as very suitable for the construction of a large hydro-electric project and the go-ahead was given in 1955 by the Federal Government of Rhodesia and Nyasaland now comprising Zambia, Zimbabwe and Malawi. The chief designer of the dam wall was Andre Coyne, a Frenchman, and the main contractors were Impresit from Italy.

Before construction of the wall began, roads needed to be built through the very rugged country to the north and south banks, an airstrip and two towns to house the construction workers which reached a peak of seven thousand in 1957. The dam wall with 6 flood gates was built between 1955 - 1959 and over four hundred and thirty thousand tonnes of cement was produced on site for the wall and power houses. By 1960, construction of the walls and turbine rooms deep underneath the earth were complete and the project began generating commercial power for Zambia and Zimbabwe. 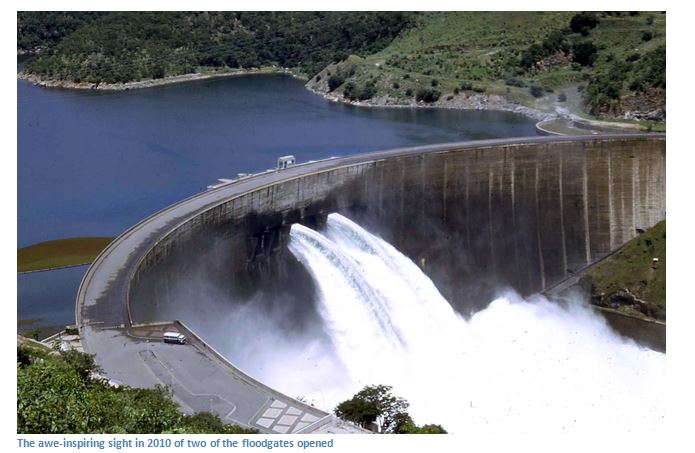 But on Christmas Eve 1955 an unprecedented flood stormed down the gorge, washing away the foundations of the dam and in November 1956, heavy rains fell a month before they were due, causing more flooding and impeding work on the dam.

The Tonga people believed these events were the work of Nyaminyami, the Zambezi River God.  On 20th February 1959, a platform in a shaft to the power station collapsed killing 17 workers and by this time the dam construction has cost the lives of over 85 people.

Gradually many believe Nyaminyami's dissatisfaction faded, as the dam wall was completed in June 1959 and the huge lake began to fill, so that at full capacity it is 282 kilometres long and 32 kilometres across at widest point, 116 metres deep and covers an area of 5,180 square kilometres. The lake has a capacity of 180 billion cubic metres and on the rare occasions that all six flood gates have been opened, over 9,500 cubic metres (300,000 cubic feet) of water surges into the river below each second! Eighty seven workmen perished during construction of the dam and St. Barbara’s chapel was constructed as a memorial to them.

At the time of completion it was the biggest dam wall and biggest artificial lake in the world.  The wall is 617 metres long and 24 metres wide at the base and 128 metres high with over a million cubic metres of concrete. The two hydro-electric schemes produce 135,000 MW of electricity. 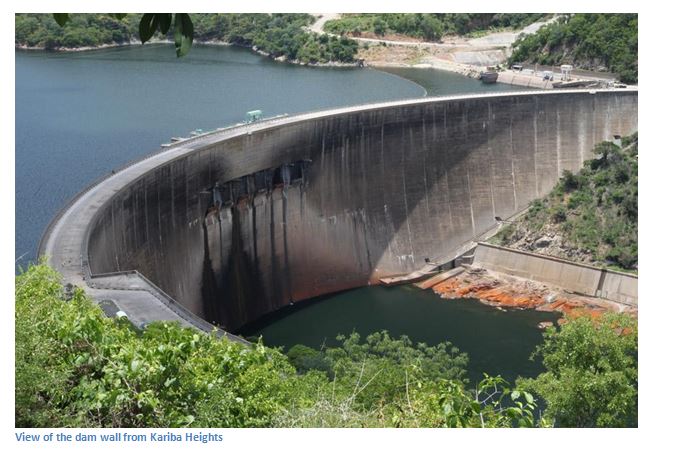 Lake Kariba is among the largest man-made lakes in the world and the second largest in Africa, after the Aswan Dam with a shoreline over 2,000 kilometres long. Kariba is home to numerous species of flora and fauna and is an exciting and unique safari destination, as well as providing water sports and the most challenging fresh-water fishing in Africa.

In 1962 millions of tiny kapenta, the size of sardines, were introduced from Lake Tanganyika where they are indigenous. They bred fast and now support a large commercial fishing business.  Caught at night on kapenta rigs they are dried and salted and keep without refrigeration and have formed an important source of protein for local people for decades.

But the once booming kapenta fishing industry is now on its knees. Years of unchecked overfishing, now worsened by the emergence of the fish-eating vertebrate, the red claw crayfish, have left scores of commercial fisheries in precipitous decline. The predator has brazenly invaded large swathes of the lake, including heavily monitored breeding corridors, and devoured kapenta eggs, small fish and other inhabitants of the decades-old aquaculture across the 300 kilometre length of Lake Kariba.

Twenty years ago, fisherman netted 19,000 tonnes of kapenta, a great source of cheap protein for Zimbabweans and income for 4,000 workers then. By 2012, output had declined by half, according to fishing firms. Facing bankruptcy, investors have responded by trimming their fleets and cutting jobs.

The downward trend of kapenta stock may well signal an alarm call for other inhabitants of the lake, such as the bream and tiger fish, as the red claw crayfish has significantly outpaced other populations. Even crocodiles don't eat crayfish. It has been eating the food sources of all fish breeds, including breams, leaving the entire aquatic ecosystem in turmoil.

When to visit:
All year around
Fee:
None
Category:
Building
Province:
Mashonaland West