An early wooden balconied 3rd class passenger saloon in very dilapidated state is attached to the 14th Class Beyer Garratt and there is also a Ruston and Hornsby portable engine.

The Kadoma Steam Centre is rather a grand name for a fenced off area between the Kadoma Hotel and Conference Centre and the A5 National Road on the Harare side of Kadoma. The hotel website makes no mention of the Steam Centre, although access to the Steam Centre is through their property; it does however list bird watching as a local attraction.

I would like to dedicate this article to the Rev Edward D. Hamer, who sadly died in 2012, and whose passion for railways resulted in the Kadoma Steam Centre and his definitive book Locomotives of Zimbabwe and Botswana published by Stenvalls of Sweden in 2001

The Ivy was built in 1926 by Peckett & Sons; her construction no. was 1705.  She was purchased new by Rhodesia Chrome Mines, Selukwe Peak in 1926 and given the name Ivy after the wife of the Chairman. Always popular with Selukwe residents, around 1972 she was given to Selukwe Lions Club and plinthed at Shumba Station. In 1986 the Shurugwi Lions Club donated Ivy to the Kadoma Steam Centre. Edward Hamer has a photo in his book Locomotives of Zimbabwe and Botswana of Ivy being moved by No 5 Tank Regiment on a tank transporter to her new location at Kadoma. (P156) 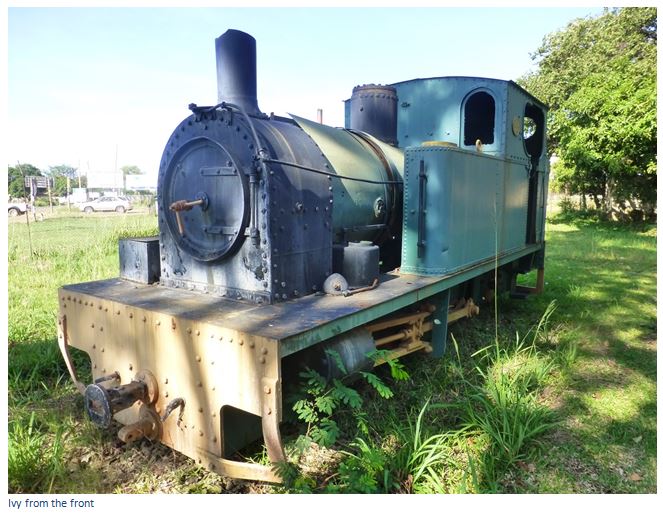 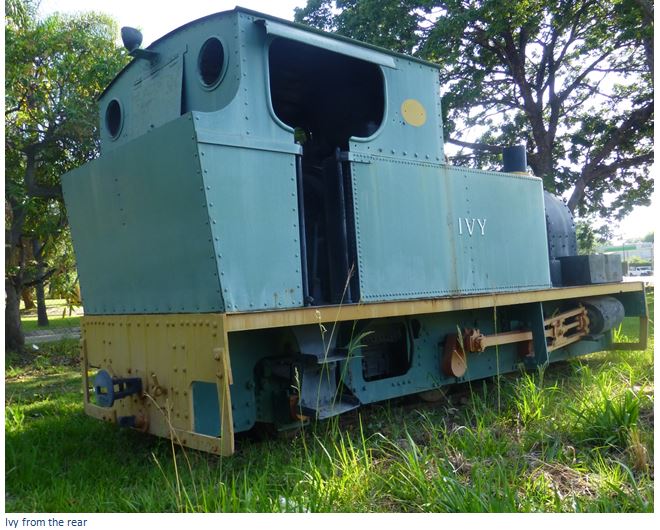 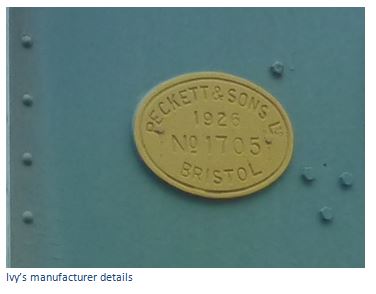 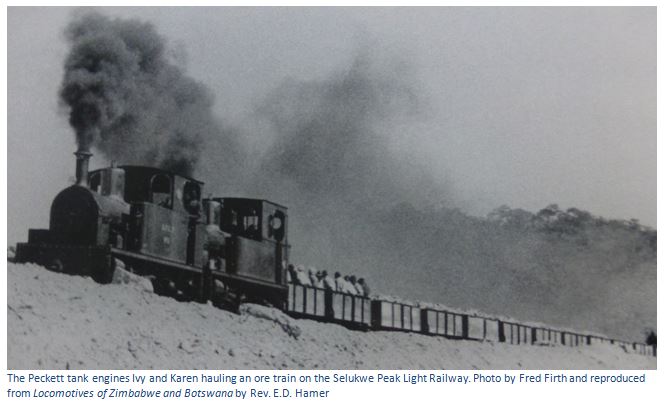 She was received new in March 1930 as No. 233 and used on the Beira line to Umtali (now Mutare) From November 1949 she was used exclusively in Rhodesia, and from June 1951 was renumbered No. 500. In 1972-73 she was hired to CFM, Caminhos de Ferro de Moçambique, the railway company of Mozambique. 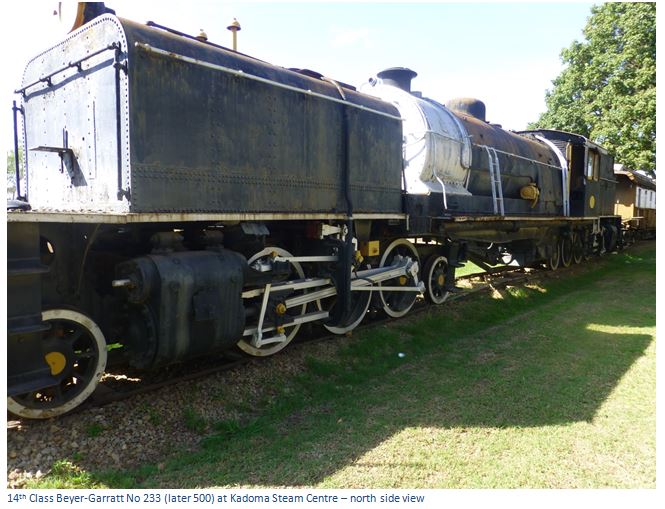 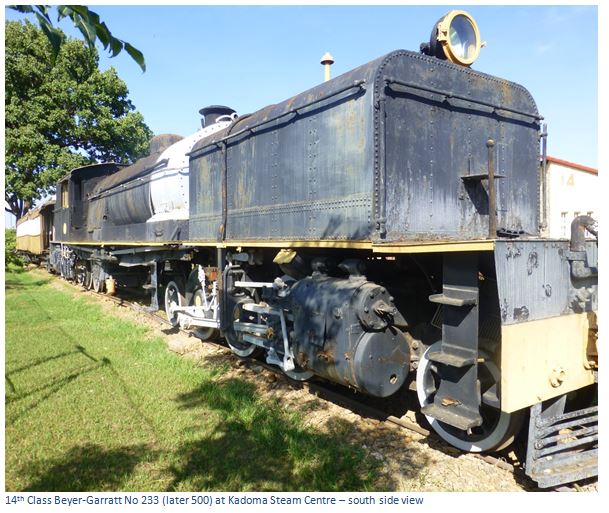 The 14th class was an improved version of the twelve 13th Class locomotives delivered in 1926 and proved very successful on the Umtali-Vila Machado (now Mutare – Nhamatanda) section of the Beira line. Until their introduction the 9th Class 4-8-0’s could haul 350 tons; but this was increased to 455 tons by the 13th Class Beyer-Garratt’s.

No. 507 worked a Bulawayo to Mbala Mbala freight train in 1984 for an unfinished film called Matabele Steamer, before joining the NRZ Railway Museum as a working exhibit. 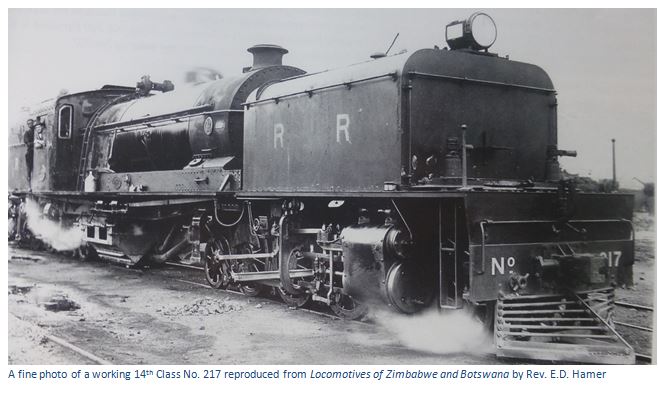 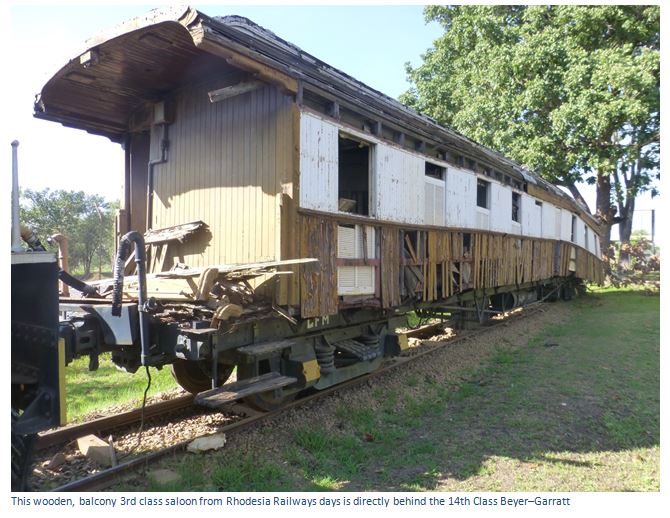 The 15th Class Beyer-Garratt was built by Beyer Peacock & Co. in 1940; her construction no. was 6936. The Rev. Edward D. Hamer calls them the “Golden age” of steam locomotives in this country and they were often called the “Flying Fifteens.” The four locomotives of the first delivery handled their loads with ease and built up impressive mileages; No. 271 was the first to rack up one million miles (1,600,000 KM)

Between 1940 – 1952 a total of 74 locomotives of 15th Class were built; the final 40 locomotives being classified Class 15A because their boilers operated at 200psi. All were Beyer-Garratt’s, except the last 10 built by Société Franco-Belge at Raismes in France.

In 1953 the last of the class, No. 423 was used in a pair with No. 393 painted in black gloss with white-trimmed tyres to haul the royal train taking the Queen Mother and Princess Margaret.

No 422 hauled the first passenger train from Bulawayo to Malvernia in 1956 before the train continued with another locomotive to Lourenço Marques.  Rhodesia Railways took over the entire 484 mile run from Bulawayo to Mafeking in 1966; being displaced by diesel DE.2s in 1973.

In 1973 the entire fleet of surviving Class 15/15A were refurbished by RESSCO (later ZECO) in Bulawayo. Steam locomotives were not used east of Heany Junction from 1983. The Class 15/15A was used on the Victoria Falls line and sometimes on the West Nicholson line.

From 1983 to 1986 they were periodically hired to Mocambique for use on the Beira line, although many were returned damaged from guerrilla activity, or bad handling.

In 1993 there were seventeen Class 15/15A locomotives intact. Since then, some were sold to Hwange Colliery and others scrapped, leaving 3 of this class of locomotives still remaining. 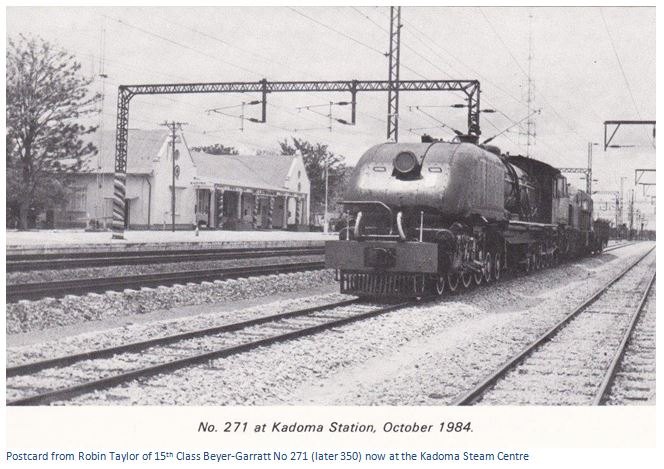 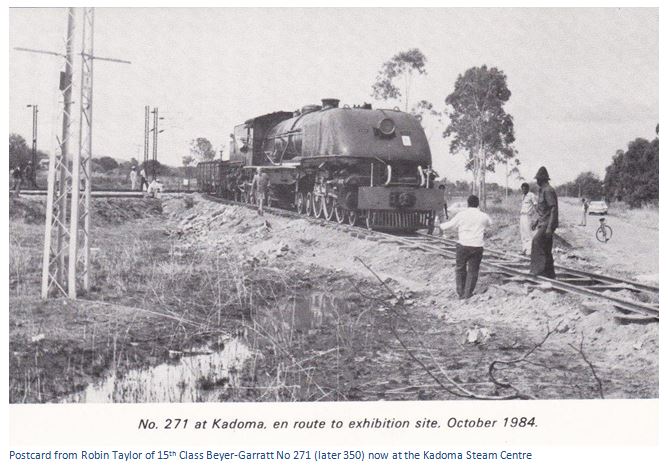 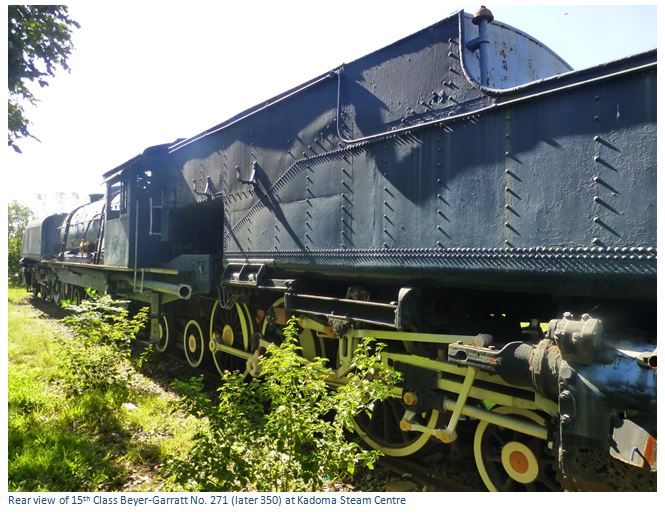 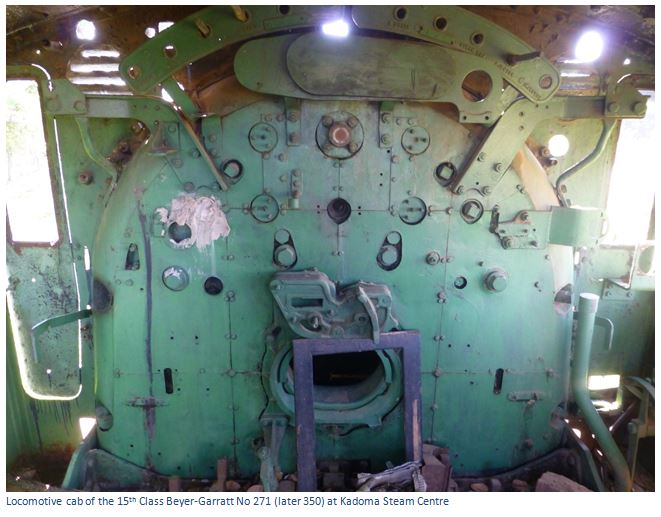 The original company of Proctor and Burton was established in 1840 as millwrights and engineers. In 1857 they became Ruston, Proctor and Company when Joseph Ruston joined and they began building four and six-coupled tank locomotives, including five 0-6-0 tank engines for the Great eastern Railway; another sixteen were sent to Argentina and others for T. A. Walker, the contractor building the manchester Ship Canal.

During the First World War, the company produced some of the very first tanks and built around 1,600 Sopwith Camels, 250 Sopwith 1½   Strutters and 200 Royal Aircraft Factory B.E.2s.The company, as Ruston & Proctor, was the largest British builder of aero-engines in the War, and built the largest bomb of the war.

The portable engine at the Kadoma Steam Centre would provide power through a drive belt from the engine’s large flywheel, painted yellow in the photo. Unlike a stationary engine, it was portble being mounted on wheels, and could easily move from one work site to another by draft horses, or oxen.

Portable engines were used to drive agricultural machinery, such as threshing machines, or milling machinery, such as gristmills, sawmills and ore mills, pumps and fans in mines and oil well, or in industrial applications for machine tools, power hammers, presses and other machines. 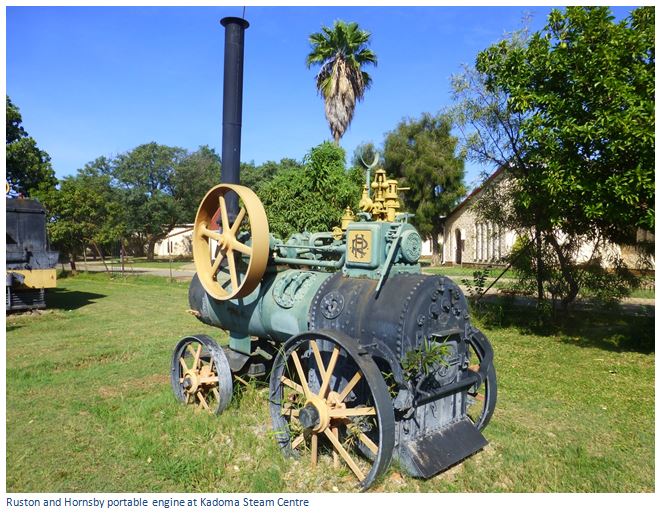 Almost all the information on locomotives comes from the book Locomotives of Zimbabwe and Botswana by the Rev. E.D. Hamer. Published by Frank Stenvalls Fὃrlag in 2001.

When to visit:
All year around
Fee:
Not applicable
Category:
Cultural
Historic
Province:
Mashonaland West