National Monument No.:
9
Why Visit?:
How to get here:

Chinhoyi is 115 kilometres from Harare. From the centre of Chinhoyi continue on the A1 towards Chirundu, 7.36 KM pass the turnoff on the left for Alaska mine, 7.65 KM turn right into Chinhoyi Caves.

Chinhoyi (formerly Sinoia) Caves is a National Monument and in 1975 was designated as a Recreational Park.  The cave is known to the Africans as Chirorodziwa, which means the "Pool of the Fallen". It is believed by local communities that the caves were used as a refuge by a bandit called Nyamakwere, who murdered many victims by throwing them into the Silent Pool. Nyamakwere was eventually defeated and killed by Chinhoyi who became the local Mashona Chief.

In the time of the Ndebele raids when Mzilikazi sent his regiments north and east in search of cattle and later in the days of Lobengula, even kraals set upon hills were not safe from these raiders, so Chief Chinhoyi descended from the hill-top with his people and built his kraal close to the entrance of Chirorodziwa. When Chinhoyi’s scouts spotted the Ndebele in the neighborhood, the chief gathered his people and led them down into the cave. Down in the cave nearly 300 people listened fearfully for the sound of the Ndebele, they drank at the silent pool, but they never bathed in it for fear of the monster lurking in its depths. When the Ndebele raiders moved on, Chinhoyi’s people returned to their normal lives.

The first European believed to have been shown the Cave was Frederick Courtenay Selous, the famous European hunter, during a hunting trip in 1887. After the European occupation of Zimbabwe, Chief Chinhoyi is said to have taken refuge in the great cave in 1896, later he moved away towards Lomagundi.

Chinhoyi Cave is technically a circular sink hole in the surrounding dolomite resulting in a funnel-shaped cavity in the limestone, produced by the action of water on the soluble crystalline rock. Collapses of other tunnels and caverns can be seen from the sink holes and depressions within the surrounding area.  The deposits of dolomite appear to have been laid down many millions of years ago in a shallow sea. Traces of algae found as fossils within the dolomites are amongst the earliest forms of life in Zimbabwe called stromatolites. Dolomite is particularly absorbent and rain water vanishes into the rock, as it percolates downwards, it absorbs carbon-dioxide from the respiration of plant roots and the bacterial decay of humus and the slightly acidic solution dissolves the calcium carbonate in the dolomite so forming the characteristic underground caverns.

Chinhoyi Caves are made up of the sunlit Sleeping Pool and the artificially lit Dark Cave.

The Sleeping Pool is accessible by two routes: 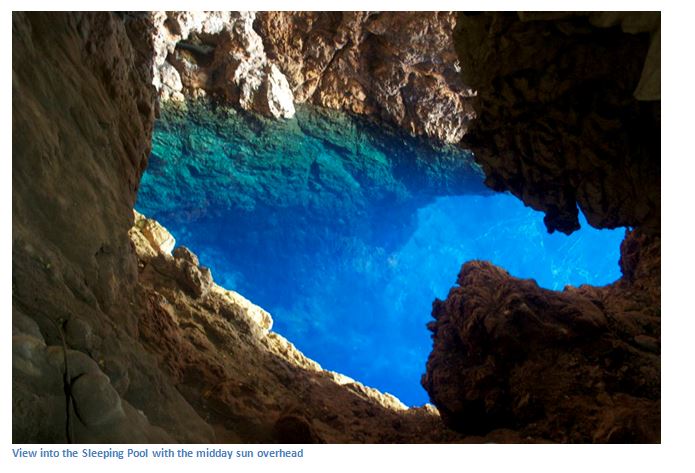 The cobalt-blue colour is from dispersed particles of lime in the crystal clear water. The pool is roughly rectangular in shape with great stalactites overhanging its surface. For a long time it was believed the pool was bottomless, but divers of the Zimbabwe Sub-Aqua Speleological Research Group revealed that the depth of the water varies between 80 metres and 90 metres. This fluctuation in depth is attributable to the amount of rainfall received in a particular season. Several under water passages have been found leading from the Sleeping Pool, but all those so far explored lead back into the Pool. Near the end of the Dark Cave is a small cavern accessible only to divers, known as the Blind Cave. A second passage connects with the Sleeping Pool 58 metres below the surface and a third one is yet to be fully explored. It seems probable that a whole complex of underground galleries and caverns may honeycomb the host dolomite rocks. Research suggests that the water in the cave is connected to an even bigger body of water as the temperature in the Sleeping Pool never varies from 22⁰ Celsius.

There are goldfish in the water and sometimes water-lilies bloom upon its borders. Beneath the lily pads, myriads of small black tadpoles lash back and forth in search of food. 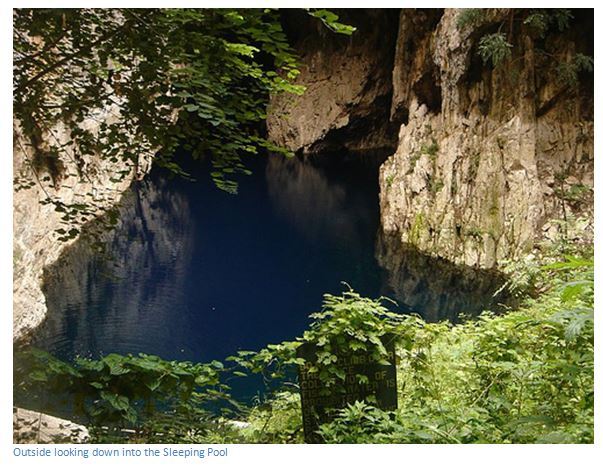 The Environs of the Caves

The Chinhoyi Caves only take up a small portion of the Recreational Park.

The Picnic sites and camp sites have three ablution blocks with hot and cold water, baths, toilets and showers. 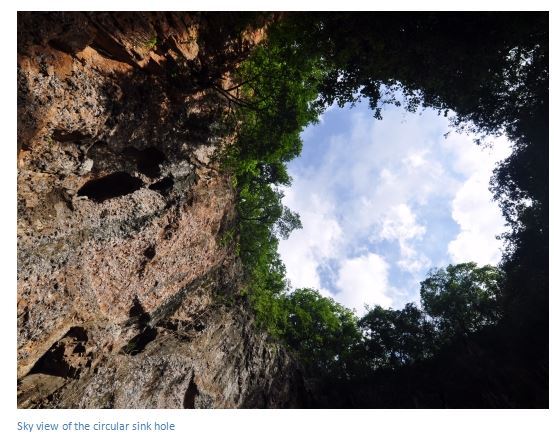