In Claudius Ptolemy’s Geographia, a general atlas of the world is the first map of Africa. East Africa was better known than the west having been visited by Greek and Roman traders as far as Rhapta, perhaps modern day Pemba Island, or somewhere in the Rufiji River delta, but this was the extent of Ptolemy’s knowledge. He stated that the Nile River arose from two lakes a little south of the Equator, a feature which was to be copied in many subsequent maps.

The Kilwa Sultanate from the tenth Century until the coming of the Portuguese in the early sixteenth century conducted extensive trade with Arabia, Persia, and across the Indian Ocean to India itself. Kilwan ships made use of the seasonal monsson winds to sail across to India in the summer, and back to Africa in the winter. Their dhows were made from the split trunks of coconut palms, their sails from coconut leaf matting and the ships were held together by coconut coirs, but were not seaworthy enough for the treacherous waters around Cape Corrientes, so the region south of that point was rarely sailed by them and Inhambane was the most southerly settlement that can be considered part of the Kilwan trading empire.

In the fourteenth and fifteenth centuries, Chinese traders knew much more about Africa than has been generally supposed. The first Chinese map to show a recognizable southern Africa and the bulge of West Africa was drawn in 1402. Between 1405 and 1433 Cheng Ho, a Chinese admiral had made seven documented expeditions to the Arabian Gulf, the Red Sea and the east coast of Africa down at least as far as Zanzibar and may have reached further south.

Several factors combined to make Portugal the foremost maritime power in the fifteenth century as they gradually penetrated further south of Africa until Bartolomeu Dias became the first Portuguese explorer to reach the Cape in 1488 and named it the “Cape of Storms" (Cabo das Tormentas) Although the very earliest maps dating from the early 1500’s drew the African outline reasonably accurately and had many of the seaports, natural harbours and headlands named; the interior of Africa remained largely blank.

The gold arriving at Sofala was mostly alluvial, hence the Portuguese name for Zimbabwe, Rios de Ouro – The Rivers of Gold. Teixeira’s map of 1630 shows the gold mines far to the south of Sofala, the mountains painted gold to add drama and the feira of Dambarare is prominently marked in the interior.

In 1693 the reigning Mutapa, Nyameande Mhande, solicited the help of the Rozvi warlord Changamire Dombo to drive out the Portuguese. The Rozvi destroyed the feira at Dambarare and the survivors left Mashonaland for Zumbo and Tete on the Zambezi River. However despite these facts, in the 1727 map by Moll below, the feiras of Luanche (Luanze) and Mazapa (Massapa) and Bocuto continue to be shown, as are the references to goldmines and Simbao. 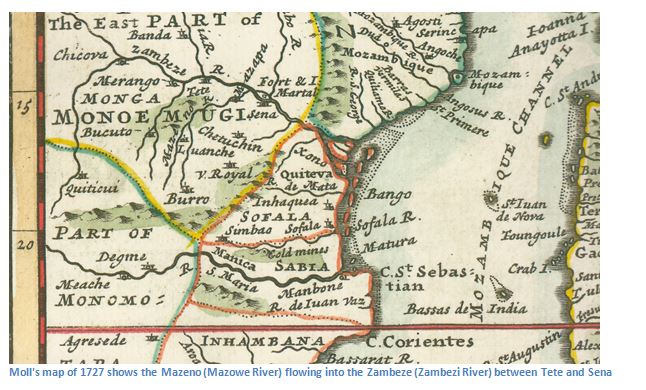 The map by Bonne in 1790 below continues to show the feiras of Dambarare, Luanze, Bocuto, Massapa, Ongoe although they had been abandoned nearly a century before. Mount Fura, usually marked much closer to the Zambezi River, is still marked as rich in gold, although the Empire of Monomotapa is shown quite accurately as occupying the north eastern area of Zimbabwe and following the Zambezi River down to the coast. 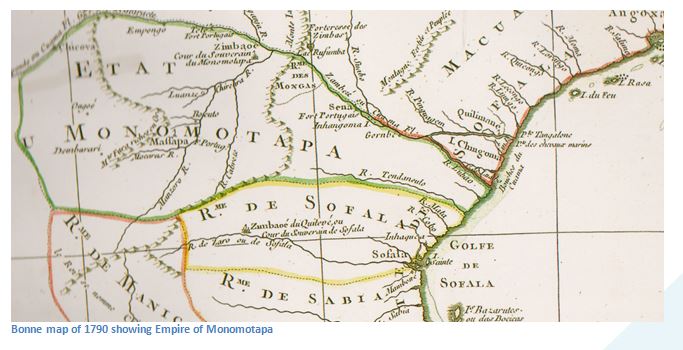 By the 1840’s hunters and missionaries were starting to make their way into the interior on the “Hunters Road,” but it was until the 1860’s that maps had completely abandoned the information shown in sixteenth century maps. Explorers such as Robert Moffat, Selous and Baines took accurate observations and drew their own maps, so that by the time E.P. Mathers issued his 1891 map of Zambesia many of the rivers, mountains and well-known locations such as Bulawayo, Hartley Hill and Fort Salisbury are accurately marked for the first time. 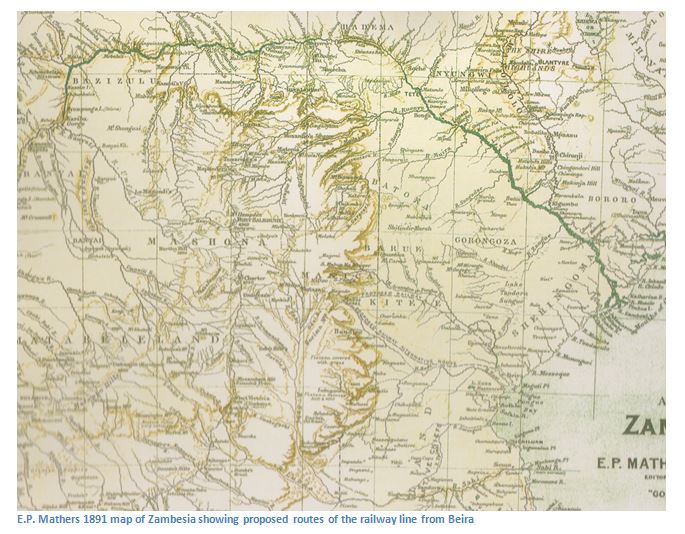 When to visit:
Historical background to the area
Fee:
Not applicable
Category:
Historic
Province:
Mashonaland East