National Monument No.:
61
Why Visit?:
How to get here:

From Harare travel 143 KM to Mutoko. Distances are from the junction of the A2 and Mutoko town as if continuing to Nyamapanda. 5.4 KM turn right at the signpost for Kauyne / Mushimbo and Muzika Schools and Mushimbo Clinic and follow the gravel road which is in good condition. 6.49 KM Just after the ford across the stream which is about 0.3 metres deep (1 foot) turn right at the Mutoko Ruins signpost, 6.75 Km reach the Mutoko Interpretive Centre which is security fenced. 4WD not required for access.

Local Budya people believe the ruins were built and occupied in the 1600’s by Makate, a man with powerful charms who used magic to subdue his rivals. Eventually he was overcome by a Chief from the north named Nehoreka, whose sister married Makate, ostensibly to seal a peace deal, but in reality to steal his powerful charms and the source of his power, and as soon as she had done so, she fled back to her brother. Without his charms, Makate was easily subdued by Nehoreka. The Budya people often refer to Mutoko ruins as Tere RaMakate (Makate’s former village)

Selous visited Chief Mutoko in 1891 to get his signature to a treaty of friendship with the BSA Company and Theodore Bent also visited the same year, but apparently Chief Mutoko was not occupying the ruin, as neither reported it. 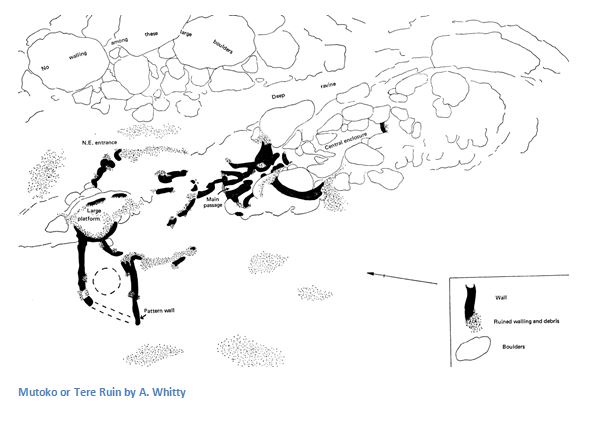 Dr H.A. Wieschoff carried out the earliest scientific excavation as a member of the Frobenius expedition in 1929, but his report is brief  and apparently he did a considerable amount of damage to the walling.  He found some gold foil and a gold amulet, Chinese celadon ware, perhaps the result of trading with the Portuguese at Luanze. The same imported ware, from the fourteenth century, has been found at Great Zimbabwe. Also iron arrowheads and knives, copper bracelets and wound copper wire and Iron Age pottery, all of which is exhibited at the Interpretive Centre on site.

Mutoko ruins have been built amongst the rocks, as shown in the plan above by A. Whitty; it has three main platforms with a passage leading from the main entrance to the upper platforms, plus evidence of a chevron pattern in the walling all leading to the conclusion that the style is very reminiscent of Khame Type 4 ruins, although they are both at opposite extremes of Zimbabwe. 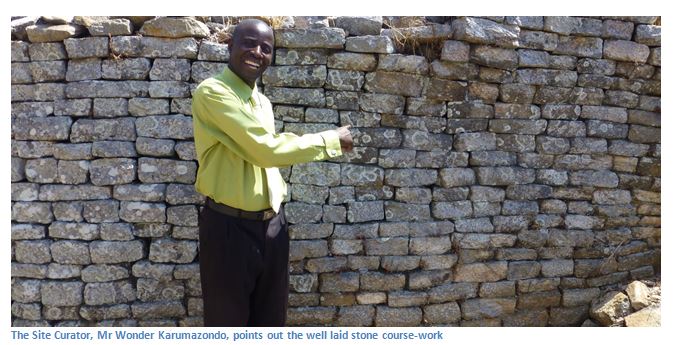 The permanent site at Mutoko Ruins probably dates from about 1000 AD when the building of Iron Age settlements (i.e. pole and daga huts surrounded by dry stone walled enclosures) around the homes of a ruling elite began. However, earlier pottery remains were found, including Ziwa ware which date from 200 to 600 AD indicating some kind of settlement was here from much earlier. From the excavated material, it appears that Mutoko Ruins at its height was contemporary and probably later than Great Zimbabwe, from 1300 to 1400 AD.

The style of the stone work is similar to that of Great Zimbabwe; particularly the Valley Ruins at Great Zimbabwe, with dressed stones laid in courses without mortar. The general pattern consists of a circular enclosure raised on granite boulders. Leading up to this is a narrow passage with a square entrance, the step at the foot of the passage has a subtle curve reminiscent of the main entrance to the Enclosure at Great Zimbabwe.  The passage is metres (42 feet) in length and resembles passages at Khame Ruins. Originally it probably had a wooden gate, as a post slot is still visible in the wall of the first entrance to the passage. A second entrance is about half-way along the passage, where there are two rounded buttresses. The remains of at least five pole and daga huts are still visible within the enclosure. 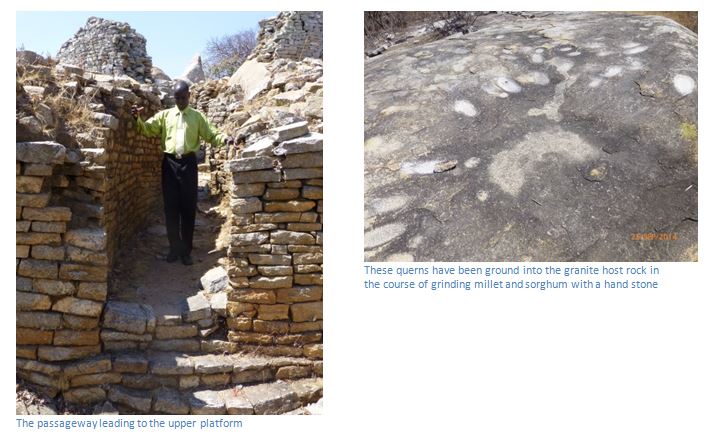 One of the enclosures at Mutoko may have been used for smelting iron. A furnace site would have been constructed with clay tuyeres leading into the smelt chamber. The furnace would be lined with alternate layers of iron ore probably found locally and charcoal (wood burnt in an enclosed clay oven without the presence of oxygen) Goat skin bellows would force air into the furnace and after many hours the iron ore would start to melt around 1400⁰Celsius. The furnace would then be tapped (i.e. opened) and the molten iron taken out and beaten into the shape of hoes, adzes or for weapons. Repeated heating and hammering would force out the impurities from the iron until the ironsmiths were satisfied with the final product. Waste iron or slag is often a good identifier of an Iron Age furnace site.

There are well constructed brick and thatched shelters with tables for visitors to enjoy a picnic in comfort. The Site Museum provides useful background information and the Site Curator, Mr Wonder Karumazondo, is very knowledgeable and cheerful tour guide.

When to visit:
Open Wednesday to Sunday 8:00am to 5:00pm
Fee:
An entrance fee is chargeable
Category:
Ruins
Building
Province:
Mashonaland East