From Harare take the A2 towards Murehwa. Distances are from the A2 turnoff to Murehwa: 2.07 KM turn left on to the old strip road (just before entering Murehwa town) 11.05 KM turn right onto a gravel road. The road leads to Rupange Primary and secondary Schools, although they are not signposted at this junction. 16.07 KM ignore road to the right, pass Rupange School on your left, 21.7 KM go through a pass with Njeja Hill on your right, Mucheka Hill on your left until you see a store just off the road on your right with the school a little further on your right. 22.7 KM turn left off the road onto a farm track which follows the school fence. Follow the track skirting Mucheka hill on your left, 23.9 KM bear left into the valley, 24.60 KM ask the Headman, Raphael Kadenge (mobile 0716199467) if it is ok to proceed to the Mucheka cave which should be visible facing south. Follow the track into the head of the valley, 26.13 KM park vehicle. The climb is quite short, but steep to the cave and some scrambling is required.

(1) Outside the cave two hunters carry a pole whilst two others engage in a stylised fight which Peter Garlakevii interprets as a representation of unity and discord. Many animals including bushpig, warthog, sable, tsessebe and a porcupine next to a large animal with trunk, forked tail and human feet and attenuated human forms in rhythmic curves, possibly dancing and a rare scene of a woman pounding roots.

(2) The outer cave roof has fifteen hunters with weapons, nearby a small group of six figures lying down and squatting wearing tassels and carrying rattles probably represents a trance scene.

(3) The roof of the cave has a large ovoid
(4) The left wall of the cave has many eland painted in red, white and black. Also separate lines of men and women possibly dancing and six unusual polychrome figures are shown full-face with raised arms, animal ears and only one leg. Elizabeth Goodallviii thought they were cave ghosts. 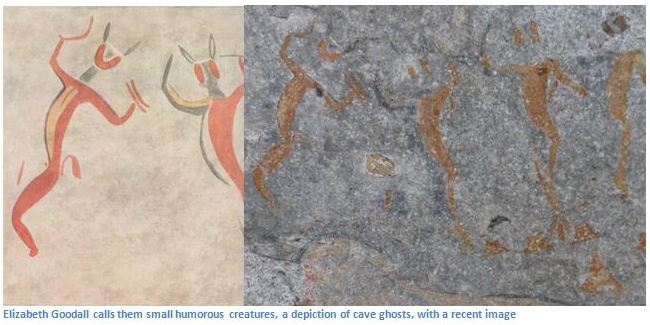 (5) On the rear wall at left are at least six giraffe painted in red, white and black. Three warthogs have their hooves and tusks drawn in sharp detail, their heads twisted in a technique known as twisted perspective, to show both tusks. Alongside three large, polychrome humans holding unidentified objects, above is a snake. Nearby are more examples of the same polychrome figures in Elizabeth Goodall’s painting above. Seven finely drawn kudu in light yellow are outlined in white with white stripes at their knees. Underlying the above is a mass of paintings in white pigment. Below the kudu are three groups of horizontal figures enclosed in an oval, and an ovoid in white and red ochre and concentric circles in red

Close-by are kudu cows and bulls, ovoids, brown and white sable, ant bears, human couples (one face to face, the other back to back) five red spiral shapes and attenuated figures and a line of seven hunters. 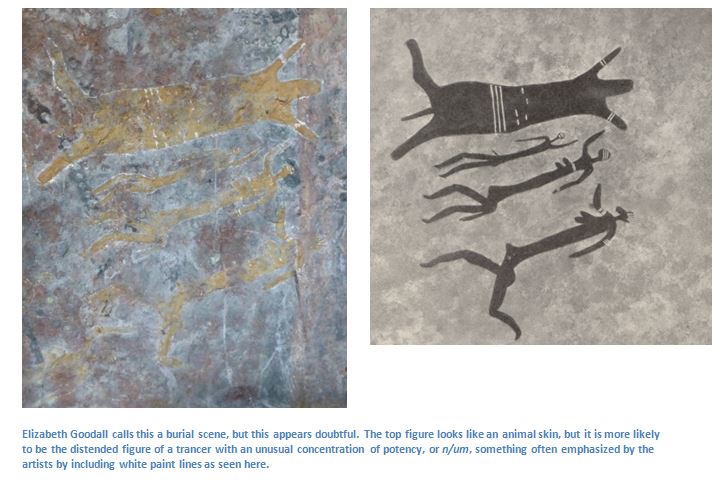 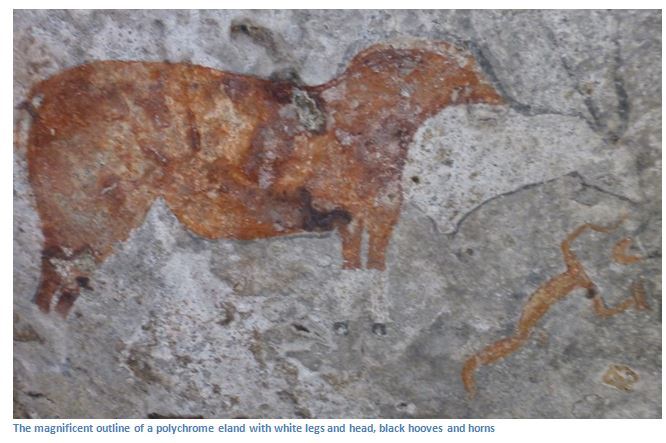 (6) The right hand side of the wall has suffered exfoliation from fires, but a large rhino, a warthog with white stripes and several tsessebe survive.

When to visit:
Open Monday to Sunday
Fee:
Entrance free, but if a local guide shows you the route over the last section of road, or up the steep slope to the cave, they should be rewarded with a donation
Category:
Rock Art
Province:
Mashonaland East