National Monument No.:
91
Why Visit?:
How to get here:

From Harare take the A2 towards 143 KM to Mutoko.  4WD not required in the dry season, but high clearance recommended. Just 0.63 KM from Mutoko town turnoff, the old strip rod joins from the left. Distances are from the A2 / old strip road intersection: Take the old strip road heading west back to Harare, 13.3 KM pass Madzimudzangara cave site, 16.04 KM turn right onto the gravel road where a large quarried stone sign says “Adriatic Stone (Pvt) Ltd, Shena quarries” 16.26 KM take the right fork heading for Manemba hill visible directly to the north. 18.02 KM bear left to go around the west side of Manemba Hill, 19.81 KM the road runs on the east side on the school, 20.14 Km keep right on the main road along the west side of Manemba Hill. 21.36 KM at some local shops turn right and follow a farm track towards Manemba Hill, stay on the main track as it heads east with Manemba Hill approaching closer. 23.11 KM turn into the small farm of Davison Gwenambira. Suggest you leave the vehicle here and ask Davison to guide you by foot the remaining 800 metres to the cave which is the higher of the two clefts in the rock visible on the Hill. The climb is at times reasonably steep, but not difficult.

On the far left of the panel are lines of figures, some carrying heavy sticks on their shoulders, a tree, two sable and an antbear shown below. 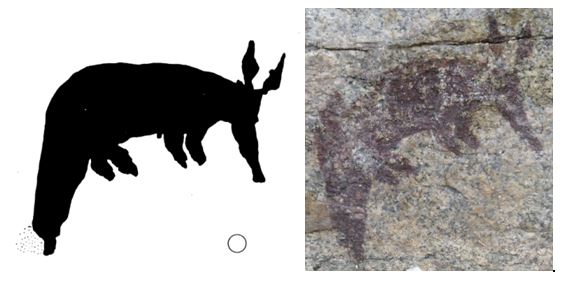 Two large figures wear bangles, one holds a crescent. Many of these figures have lines coming from various parts of their body which do not represent loss of blood, or sweat or body fluids. They most likely represent various forms of spiritual energy, or potency, in the way these artists believe their individual potency, or n/um is released from their bodies through dancing and trance. The images shown in Peter Garlake’s tracings below are often shown in pairs, with legs bent or spread-eagled, their arms raised. Legs and heads have normal proportions, but the stomach is swollen and double lines zig-zag from between their legs. In the past they were often interpreted as “mother goddesses.” But these figures probably represent dancers whose n/um or potency within their stomachs is becoming active and expanding and then being released as streams from their bodies. 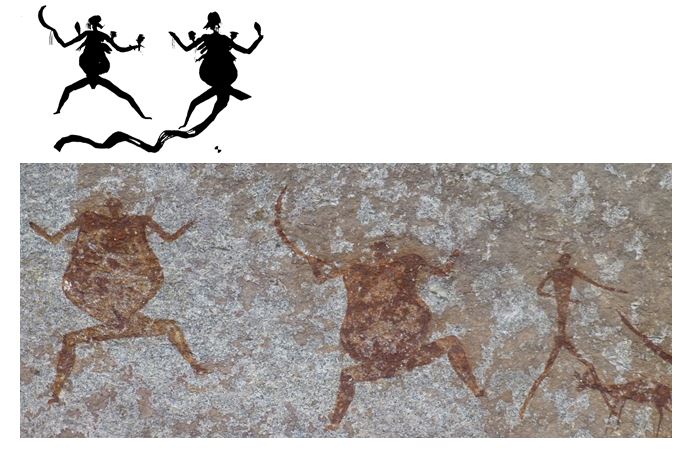 Another figure pierced by two arrows, falls forward, as if in trance, whilst another large figure holds a crescent and another seated figure with a swollen stomach and tail holds an oval object. All these invoke images of trance.

Above a group of seven buffalo are outlined in white, or have white lines around their necks, or double lines across their knees; white paint is a symbol of potency. Below one of the buffalo is enlarged to dhow a scene of two hares and an antelope bleeding from the nose, another metaphor for trance. 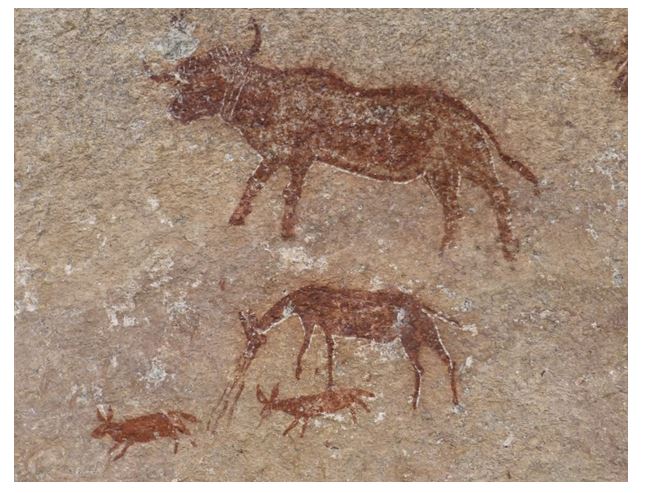 Below a figure pushes a long stick towards a legless animal in the scene painted by Elizabeth Goodall below compared with a recent photo. 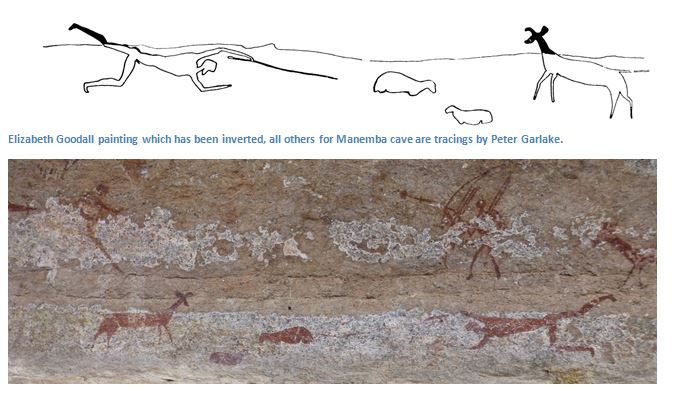 The scene below with two figures lying down, one full of arrows and surrounding hunters aiming their bones should not been interpreted as it appears. The use of symbols in hunter gatherer art was just as complex as our use of symbols in Christian art. So much of what we see cannot be taken literally; each part of a scene is a coded message and carries meanings of which we are largely unaware. These recumbent figures, sometimes with oval shapes attached to them and their legs bent in the manner below are very often metaphors for trance. Dancing was the most religious expression known to these hunter-gatherers and its purpose was to induce trance when they become rigid, tremble, sweat and may bleed from the nose and may be forced to lie down unless supported by others. 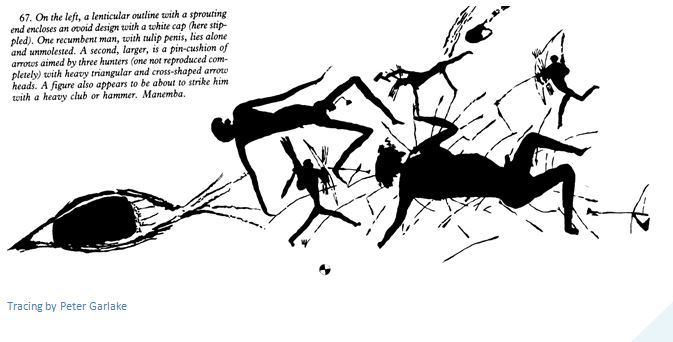 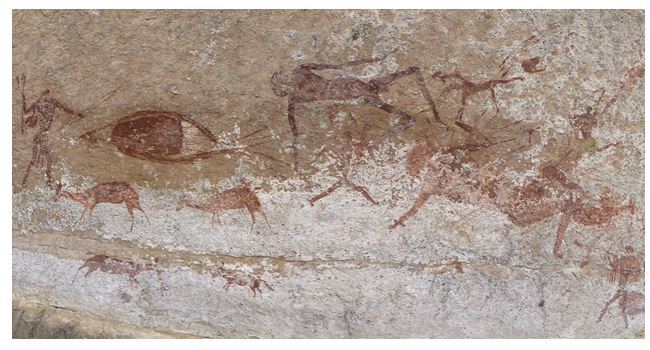 On the cave roof there is another complex scene with a pair of figures holding crescents and rattles; one has lines from her wrists, the other from between her legs with its end tasselled. Below an ovoid / formling with white caps and superimposed are antelopes lying down with white bangles on their forelegs. Below a pair of eland and a pair of felines and to the right are crouched dancers, one with lines from his chest, the other holding sticks; a warthog with finely detailed mane between them. 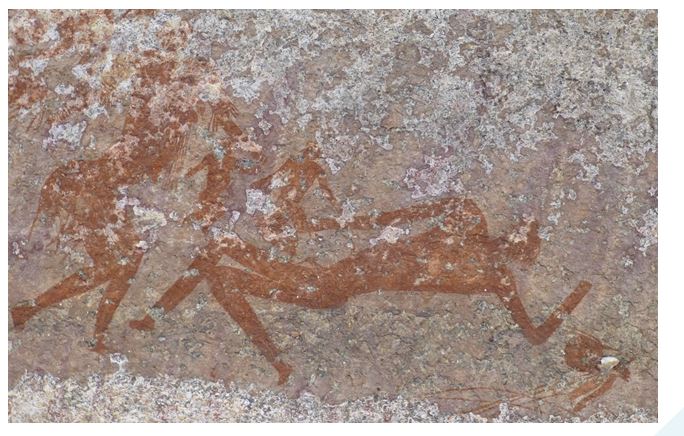 Further to the right, are two bush pigs and three sables with the scene traced by Peter Garlake below of two therianthropes (i.e. figures with human and animal features; in this case large ears and long pointed muzzles) They probably represent ghosts or spirits of the dead and it appears they were seen by trancers in their journeys into the spirit world and are part of the language of trance-induced hallucinations.

Below the leading sable is the scene below with a human holding a dog-like creature by the tail and appears to raise a club and a camp scene with a couple appearing to embrace. Finally, to the far right two zebra and a dark sable are a line of women with aprons and sticks, some with bags and a two ovoids or formlings 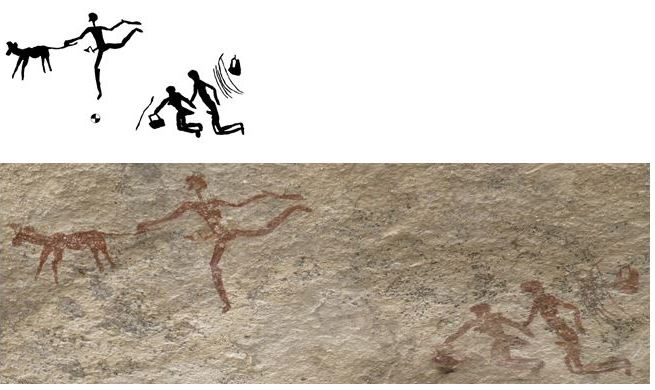 These magnificent images of hunters with wedge-shaped bodies outlined in white with white bands at their wrists and knees stride forward purposefully. The quality of the figures and the bright colours are reminders of how all these friezes once looked when freshly painted nearly two millennia ago. 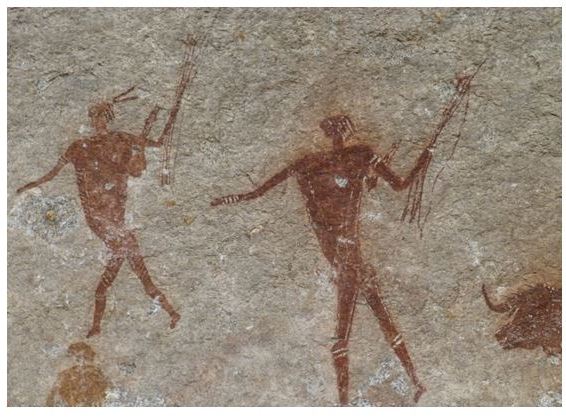 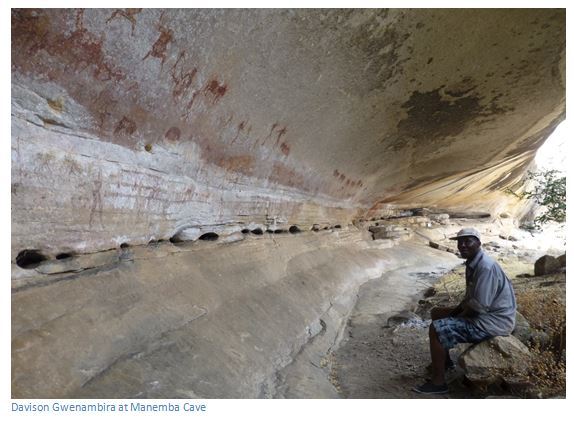 When to visit:
All year around
Fee:
Entrance free, but if a local guide shows you the route over the last section of road, or up the steep slope to the cave, they should be rewarded
Category:
Rock Art
Province:
Mashonaland East