From Mutoko, Luanze fiera is 58 KM distant at a small bus stop and store named Masarakufa, on the A2 National Road towards Nyamapanda and Mocambique border. From Nyamapanda, Masarakufa is 38.6 KM. The most obvious sign of the site is the Masarakufa School and Clinic sign, prominently painted in blue paint. There are no signposts indicating this is a national monuments site.

Luanze was the site of an important trading fair, called a feira, which was established in the 1580’s and sited on the eastern edge of the Makaha gold belt which extends south down to the Makaha and Ruenya Rivers. Makaha gold belt has been the site of numerous ancient gold workings which have been mined for centuries; local people continue to pan the Ruenya River for alluvial gold in the current recession with the lack of employment opportunities.

The Luanze site was rediscovered in late 1964 by a prospector, Mr N.J. van Wyk who was gold panning in the vlei below the site and found not only gold, but small glass beads. The presence of gold was puzzling, as the local quartz veins carried no gold, and further; an analysis of the gold found it to be both alluvial and mined. Clearly, this gold had been brought to the spot for the purpose of trade. 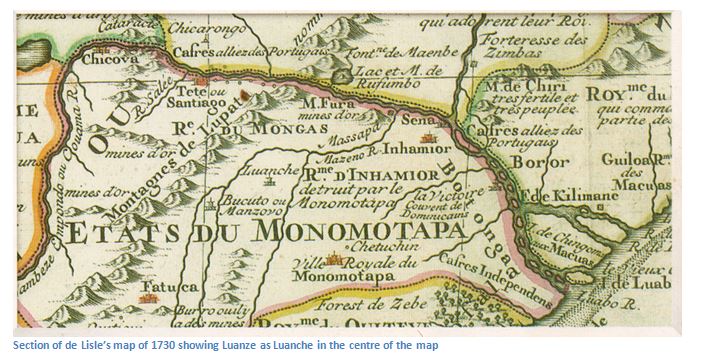 The main features of the earthwork site are two separate rectangular earthwork enclosures. The earthworks are south of Masarakufa store, 100 to 150 metres south of the A2 road. 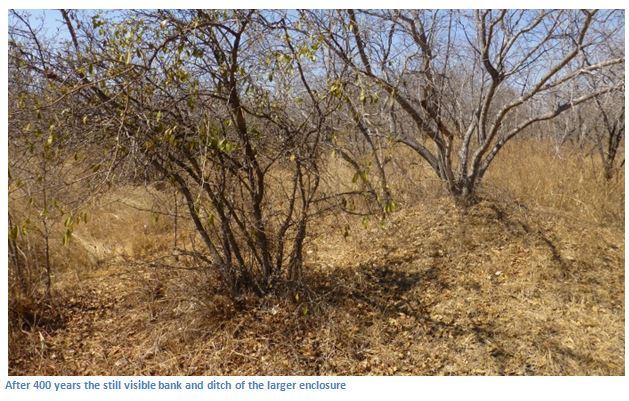 2. The smaller enclosure is 36.5 metres (120 feet) to the west of the larger enclosure. It’s orientation is the same, it also has four bastions projecting from the centre of each wall, the ditch surrounds each of the banks, except for the south where there is a terrace 7.6 metres (25 feet) wide between bank and ditch. Within the enclosure there is a low central mound 12 metres (40 feet) in diameter and three circles 3 metres (10 feet) in diameter of stone schist slabs set vertically in the ground at 0.6 metre (2 feet) intervals, with another schist slab in the centre, probably the foundation frame for huts floors.

3. 119 metres (390 feet) east of the larger enclosure (1) is a rough stone wall of piled schist slabs 0.9 metres (3 feet high) enclosing a space of 17 to 30 metres (56 to 100 feet) containing the dhaka remains of huts and grain bins. Garlake says they are similar to schist enclosures found at Mt. Darwin, three of which have been described by Axelson and may date from the nineteenth century. (i.e. they are comparatively recent additions)

4. Between the larger enclosure (1) and the rough stone enclosure (4) is a cemetery of 20 to 30 graves each marked by a single stone and damaged bowl or pot, which also appears to be comparatively recent and identical to the pots found at Mt. Darwin. 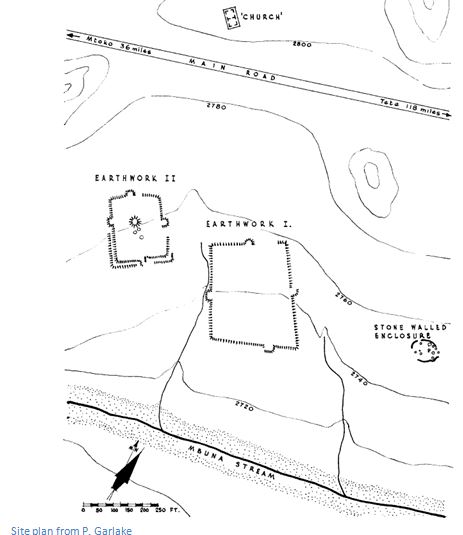 5.  Finally, 230 metres (250 yards) north of the larger earthwork (1) is the former Dominican Church in the middle of a cultivated field. It has a rectangular structure made of unusually thick pole and daga, consisting of two bays, each exactly square and 4.6 metres (15 feet) across,  surrounded by a low platform 2.4 metres (8 feet) wide. The Church is in a small patch of woodland, 120 metres to the west of the gravel road heading to Masarakufa School on the western edge of an open field and north of the A2.

It takes a bit of looking to find the site, but it is marked by a plinth placed by Museums and National Monuments of Zimbabwe.  Although regrettably in a very poor state of repair, the foundations are visible with the walls just a few centimetres high and it is still possible to see the outline of the wooden poles imprinted into the lumps of daga floors which are scattered about.

This historic site surely deserves better protection? It should be excavated and a local site museum established to protect the already fragile remains. Its convenient proximity to the A2 national road should provide an opportunity for National Museums and Monuments of Zimbabwe (NMMZ) to make the site commercially viable along with Mutoko Ruins. 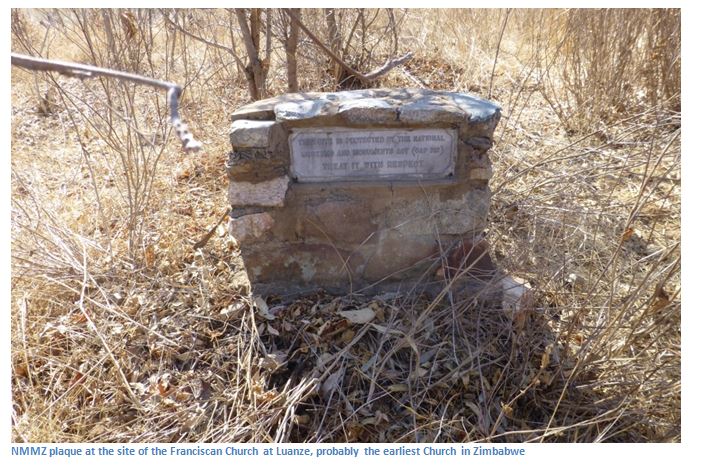 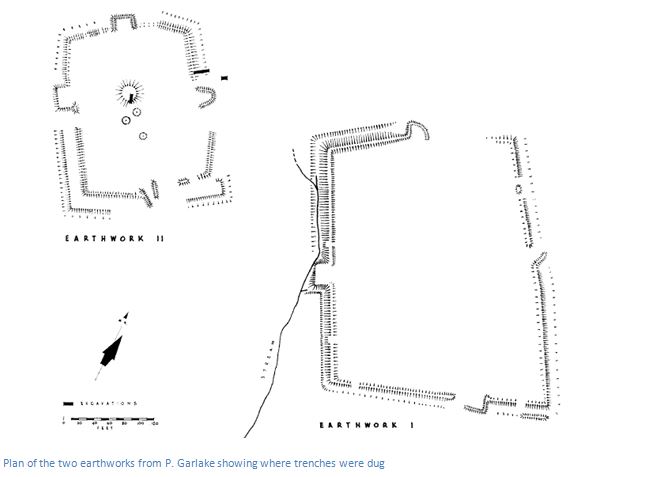 Excavations by Peter Garlake in the smaller earthwork revealed there was just one period of occupation, without interruption. The collapsed remains of a pole and daga building and large quantities of charcoal were excavated; plus a schist riffle box, a slab with twenty-five holes of 3.8cms (1.5 inches) ground in one side, used for trapping gold with another similar riffle box found on the surface within the walled enclosure. The site also yielded glazed Chinese ceramics of the seventeenth century and beads commonly found in late Iron Age ruins and locally made pottery. The imported blue and white Chinese ceramics have been found outside the earthworks and in the lands around the Church and across the vlei and stream to the south and on a kopje west of the smaller earthwork. This has been dated to the Ming Dynasty (1573-1619) and links with similar finds at Fort Jesus in Mombasa, occupied by the Portuguese from 1593 – 1698. Buff stoneware with bright green glazed exterior and decorated with leaves and flowers and yellow glaze is seventeenth century Chinese. Other late seventeenth century European red and grey stoneware was found, as well as rough Portuguese imitations of Chinese ceramics with a quantity of locally made pottery.

Large quantities of beads were found in the ditch and midden outside the western bastion of the smaller enclosure made from opaque glass; the quality of the glass is not good and the colours are dull. Copper and bronze beads, thick coiled copper wire were found along with iron items: an arrowhead, razor and small axe head. Two lead shot, a single gold pellet and fine gold was found was also found from pannings in the area.

The feiras of Masapa, to the north, and Luanze were established sometime in the 1580’s and the Churches were built in 1599 as a reward for the Portuguese helping the Mutapa Chief Rusere against his enemies. In 1629 both feiras were attacked by Mutapa forces, but the Mutapa were defeated and their ruler was replaced by a Portuguese nominee Chief Manuza. In 1693 the feira at Dambarare was destroyed by Changamire Dombo and all the feiras in Zimbabwe were abandoned by the Portuguese. Luanze may have already been replaced by other feiras more central to the goldfields of Mashonaland by that date.

Today, there are few visible remains of the Luanze settlement that featured prominently for centuries on the maps of Africa, although some of the stone markers placed by Peter Garlake, who excavated the site in the 1960’s are still visible, as are the hut foundations built by the Vashambadzi and Swahili traders whom the Portuguese persuaded to work for them.

In his conclusions Peter Garlake states there is no evidence that the two separate earthworks were designed as defensive structures, although the bastions suggest some military background. They are sited on easily overlooked ground and their low walls and long perimeters make them hard to defend. He believes they were built for secure bulk storage as warehouses for trading purposes. Dambarare feira had five separate earthwork structures where separate merchants from Tete or Sena conducted business buying gold. The number of beads and imported ceramics suggest that an identical trade was carried out at Luanze feira. The dates of the imported ceramic wares give a seventeenth century date contemporary with Dambarare and Maramuca feiras and with Fort Jesus at Mombasa.

Father Joao dos Santos O.P. who visited in 1587 says; “the residents of Sena and Tete have houses called churros, where they store their merchandise and from which they sell it and send it to be sold throughout the country.” Diogo de Couto wrote about the same time; “there are three markets where the Portuguese go to trade for gold go to trade for gold and sell their merchandise…the first is called Luanhé and is about thirty-five leagues from Tete to the south.” Garlake shows how this distance almost exactly correlates with present day distances.

Finally, Pedro Barretto de Rezende describing Luanze in 1634; “the fort of Luanze before mentioned, where the Portuguese hold a market, is in the lands of Mocaranga, forty leagues from Tete. It is only a palisade of stakes, filled up inside with earth, allowing those within to fight under cover. The stakes are of such a nature that when they have been two or three months within the ground they take root and become trees which last many years. The size of this fort inside is like a large terrace, being a hundred fathoms (brassas) in circumference, where the captain resides, who is elected by the captain of Mocambique, and with him the Portuguese and Christians  who may be trading in those parts.” Again, Garlake demonstrates that the actual sizes at Luanze correspond with Rezende’s measurements.

In Mtoko, the Interpretative Centre has some of the artefacts unearthed at the Luanze feira. Visitors should note that local people are suspicious of visitors and some caution should be exercised. We were accompanied by Wonder Karumazondo, the Site Curator at Mtoko Ruins, who obtained the permission of the local headman. There are quartz reefs in the area and the Makaha gold fields are a few kilometres away, so locals think visitors have come looking for gold. It would help if NMMZ appointed a local site guardian who could show visitors around, earn a little money for the tour and dispel the fears of local people.

When to visit:
All year around Monday to Sunday 6am to 6pm
Fee:
None
Category:
Ruins
Historic
Building
Province:
Mashonaland East