John Bradburne – the former warden at Mutemwa Leprosy and Care Centre, a candidate for Sainthood?

Drive into Mutoko from the A2 continuing through the town as if going to Nyamapanda. Distances are from the bus and kombi terminus on the left: 0.67 KM turn right onto a gravel road with the blue and white sign post for Mutemwa Leprosy Care Centre and John Bradburne site and continue driving south, 1.95 KM turn left at another blue and white Mutemwa signpost, 2.98 KM the John Bradburne site is marked on the left, continue on towards an avenue of Jacaranda trees for the Mutemwa Leprosy and Care centre, 3.4 KM reach the car park for the administration entre.

Born on 14 June 1921 in Cumbria, England, his father was an Anglican clergyman. When World War II began, he went into the Indian Army and was sent to Malaya. After the fall of Singapore, Bradburne spent a month hiding in the jungle before successfully escaping by sea before seeing action with Wingate’s Chindits in Burma.

In Malaya Bradburne had a religious experience and when he returned to England after the war he stayed with the Benedictines at Buckfast Abbey, where he converted Catholicism in 1947. He wanted to be a Benedictine monk, but he felt a strong urge to travel, so for the next sixteen years, Bradburne wandered through England, France, Italy, Greece and the Middle East with all his belongings in a Gladstone bag. He entered different religious communities in those countries before walking from Jerusalem to Rome and living for a year in the organ loft of a small Church.

In 1962, he wrote to Father John Dove in Zimbabwe asking: “Is there a cave in Africa where I can pray?" He was invited to come and be a missionary helper. After his arrival, Bradburne told a Franciscan priest that he had three wishes: to help the victims of leprosy, to die a martyr, and to be buried in his Franciscan habit. The Jesuit missionaries introduced him to the Mutemwa Leprosy Settlement near Mutoko, 143 kilometres northwest of Harare. He arrived in 1969, went on to become its warden, and for ten years assisted the people with leprosy, feeding and caring and bathing those who needed help, keeping vigil with them in their sickness and burying them when they died.

He helped build their small church at Mutemwa, organising its music, even teaching the lepers Latin for the Gregorian plainchant. Charles Moore observes John had no electricity and no money and he lived in a tin hut outside the camp with no running water or electricity, freezing in winter and scorching in summer. His heart was wholly centred on God and his people in Mutemwa and he poured out his thoughts and feelings in thousands of poems which are now being collected, organised and put on a website under his name by Professor David Crystal. When not attending to the lepers, he lived the life of a hermit, eating very little, writing poetry and praying, often walking a prayer path on the hill.

By 1979 with the war raging, Bradburne was urged by his friends to leave Mutemwa, but he insisted that he should stay with the lepers. On Sunday, 2 September 1979, the guerrillas came and accused him of being an informer; they kidnapped and tried to humiliate him without success and then shot him, leaving his body on the Nyamapanda road. He died instantly, on 5 September at the age of 58 and was buried in a Franciscan habit, according to his wishes, at the Chishawasha Mission, about 18 kilometres northeast of Harare.

Given Bradburne's extraordinary life, his famous charm and oddity, and his martyr's death, it is not surprising that a cult of him quickly grew up. Miraculous drops of blood were witnessed by many to fall from his coffin at his funeral. Many pilgrims come to his shrine at Mutemwa, and some claim to have been healed by his intercession. John Bradburne’s Headstone is on Chigona Mountain, above the leper settlement where he served. A service is held in Bradburne's memory at Mutemwa every year, drawing as much as 25,000 people each time. In 2009 a Mass commemorating the 30th anniversary of his death was held at Westminster Cathedral in London, England.

In July 2001, the Franciscan priest Father Paschal Slevin, O.F.M., presented a petition to Patrick Fani Chakaipa, Archbishop of Harare, for an inquiry into Bradburne's canonization. Father Slevin commented: "I have no doubt that John died a martyr in his determination to serve his friends, the lepers. If his martyrdom is accepted, his cause for sainthood could go quite quickly". It is hoped that Pope Francis will acknowledge John Bradburne’s service during his life to the underprivileged and Mutemwa has become a place of pilgrimage for thousands of people who became inspired by his example. 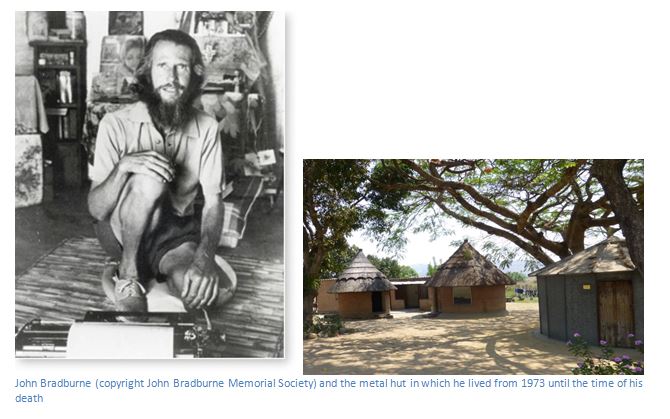 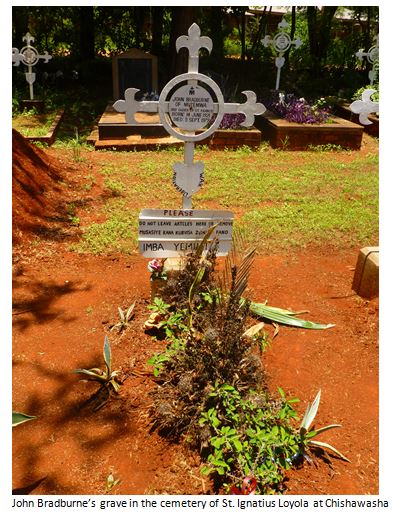 A thriving John Bradburne Memorial Society (www.johnbradburne.com) is run by his niece Celia Brigstocke and is the primary source of funds to keep the Mutemwa Leprosy and Care Centre operating in order to help recovering leprosy patients, physically handicapped and destitute people. The village has a clinic and clinic hostels for those unable to help themselves and two roomed houses for their patients and families. A kitchen and laundry provide food and services and the Centre is managed by Mrs Marge Chigwanda and a dedicated team of helpers.

Visitors are welcome, as are any donations, which can be made directly at Mutoko, or to the registered Charity website on www.zimbabwechallenge.org or www.johnbradburne.com

Funds or gifts in kind are needed to provide for food and medicines and maintenance of the Care Centre. Some of their projects include installing new boreholes, solar power to the chapel, computers and printers (old or new) for the administration and the establishment of self-sufficiency projects such as a poultry project and a piggery so they can sell eggs to make the community sustainable.

When to visit:
Open Monday to Sunday
Fee:
Entrance free, but donations towards running the Care Centre are welcome
Category:
Cultural
Other
Province:
Mashonaland East