This historic Church was constructed in 1901 - 1902 by the resident Brothers using locally fired bricks and lime quarried and burnt in a kiln on the hill behind the seminary.

Most of the Church remains original, including the naturalistic paintings above the apse. The stencil paintings on the brick arches originally painted by Father Emil Schultz became water damaged and have been re-painted.

The Dominican Novitiate remains many of its original 1910 finishes.

Directions are from the junction of Enterprise Road and Glen Helen Way. Continue driving east out of town on the Enterprise Road as the road gradually descends through Helensvale. At the bottom of the hill after a right bend, turn right onto the Chishawasha Road at the Umwindsidale Service Station. 1.45 KM pass St Joseph’s Mission Clinic and School on the right, 1.75 KM the tar road comes to an end and continues as good untarred road. At 3.75 KM pass the Chishawasha Regional Seminary, 3.8 KM pass the turnoff on the left for St Ignatius School, and then ignore the turnoff for St. Peter Claver School on the left, 7.1 KM park on the left of the road opposite the School gates at Chishawasha Mission.

The historic cemetery is a further 400 metres along the road and under the trees on the left.

There is a much shorter route on untarred road to the Mission Church from the Arcturus Road.

Chishawasha is the oldest mission in Mashonaland and was founded in 1891 by Father Hartmann, who had been a Chaplain to the Pioneer Column in 1890, for the Jesuits.  The Society of Jesus was granted over 10,000 hectares (25,000 acres) of land about 25 kilometres northeast of Salisbury (now Harare) by the BSA Company. Father Peter Prestage was the first to take occupation and in July 1982, the first band of seven missionaries arrived, including Father Richartz and five brothers, including a cook, carpenter, and wheelwright.

The first site near Mtenje stream was rife with malaria and a death trap, two Fathers died within four years and four more within the next three years. A brick and thatch community house and chapel were built followed by farm buildings and ploughing the land.

The school was initially opened for boys only in 1893 and it started as a farm school. The school was approved by the colonial government in 1894, and girls were later admitted in 1898. In the early days, the school was both academic and technical for both boys and girls. Students were taught building, carpentry, gardening, animal husbandry.

In June 1896, the Mashona Uprising, or First Chimurenga broke out and despite the missionaries being warned, they decided they could defend their property and themselves. The community house was seized, their cattle stolen and the Brothers were besieged in their double-storied barn for a day in June 1896 during the First Chimurenga before being ordered back into the laager at Salisbury (now Harare) for five weeks where they suffered some abuse for being friends of the Mashona.

The first relief party, led by Captain St. Hill, had been forced to turn back on the outskirts of what is now the suburb of Highlands, but early on 25th June, Captain Taylor of the Natal Troop, with 43 men and a Maxim gun reached Chishawasha Mission from the Newlands and Kamfinsa Park areas.

Within half an hour, the mission was evacuated and C.T. Stevens, their guide, suggested to Taylor that the party use the old 'Prestage road' on its return to Fort Salisbury to avoid a possible ambush. Taylor agreed. The leaders were abreast of some rocks when a shot was fired. The group scattered, but ”Lion” Stevens was killed, shot through the heart.

On their return with their Superior, Father Richartz, the Brothers found their buildings had been occupied but were not destroyed. A new chapel was built in 1898, but proved too small for the growing number of Christians. Already eighty children were being educated and another sixty being trained in metalwork, carpentry and gardening.

A chapel built in 1898 proved too small for their growing congregation, so in 1901 work began on a new church to be 40 metres long, nearly 18 metres wide which included a central nave, two aisles and two short towers at the west end. The building was supervised by Brother Lindner using bricks burnt at the mission and lime quarried and burnt in a kiln on the hill behind the present seminary. The brick built church still stands and is little changed since its completion in 1902. The corrugated iron roof has been replaced, but the ceilings are original. The internal structure has a series of brick arches, which were plastered, and stencil painted by father Emil Schultz, although they have been repainted after water damage. The paintings above the apse are original. The original round windows of the clerestory have been replaced by steel frames. Renovations in 2013 ensured the mission church of St Ignatius Loyola will continue to do God’s work into the future.

Brother Joseph Timmer did the ironwork and Brother John Baptist Krechel made the soapstone altars, the pulpit and statue pedestals. The floor is partly paved in soapstone tiles and the panelled doors are magnificent. The brickwork includes specially moulded bricks to create corbels, arches, and concave flutings. The foundation is solid granite. The original timbered windows have been replaced by steel frames. The apse was severely attacked by termites and required heavy brick buttresses to prop it up. 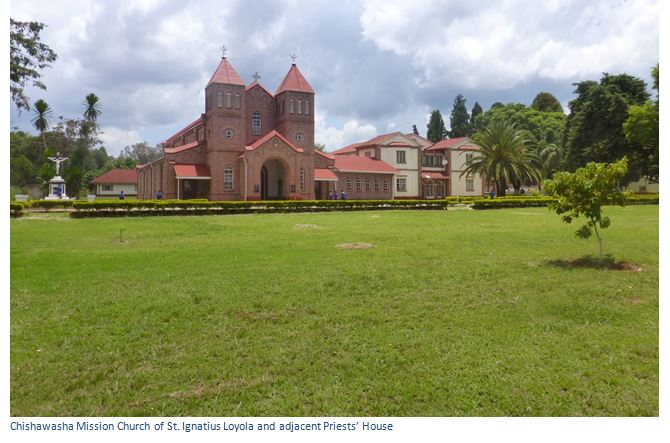 The adjacent Priest’s house was built after the church and retains many original internal finishes and in more recent times was linked to the church in the same materials and style as the original church.

In 1898 the Dominican sisters arrived to educate local girls. Their original house was in poor condition and was replaced in 1910 by the double-storey convent that is still mostly original. The Dominican Novitiate was built on granite foundations and originally had a separate kitchen off a back verandah that has since been enclosed. The front verandah has circular brick columns; each made of specially moulded bricks with carved soapstone base and head and support a series of segmented arches forming a grid that in turn supports an iron verandah roof. The ground floor originally comprised a Chapel, dining room, and community and visitors room. The first floor had two long dormitories either side of central passage and staircase, but a dormitory block has been added to the west and the main community room is now upstairs.

The windows of the novitiate are the original twelve-pane timber sliding sashes with panelled doors. The glazed doors to the first floor balcony have their original stained glass and look out to a statue of St Dominic over the main entrance. The timber floors are original as are the ceilings in the ground floor passage and first floor.

By 1915 the school had been divided into two sections – academic and industrial. In the latter, the girls learned housecraft and needlework and the boys learned gardening, tailoring, and building. 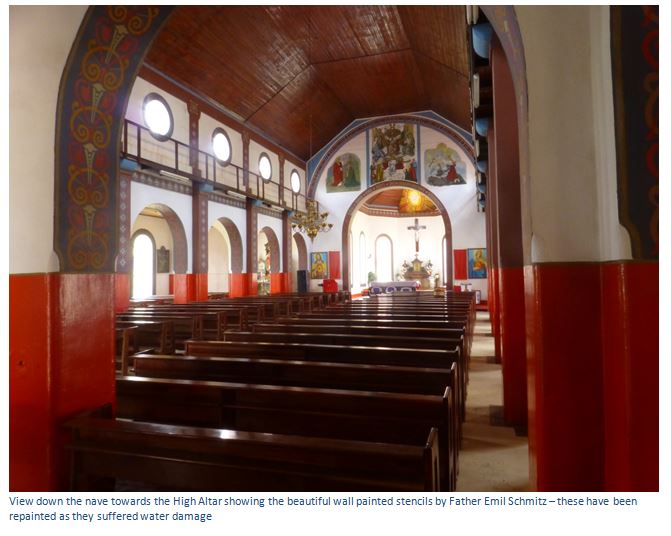 Chishawasha gradually developed into a national school; pupils came from all over the country. The mission church sits in the grounds of the Chishawasha Primary School, a boarding school for boys and girls who come to study here from all over Zimbabwe.

Chishawasha educated the first African Court interpreter. President Mugabe's mother, Bonaventure was an early student of Chishawasha. Throughout the twentieth Century and until today, Chishawasha has produced many notable teachers, public servants, nurses, doctors and priests. The current Principal at Chishawasha, Fr. Fidelis Mukonori, SJ was a former Chishawasha student.

The Counte de la Panouse and Countess Billie were married at Chishawasha Mission on the 23rd July 1894. 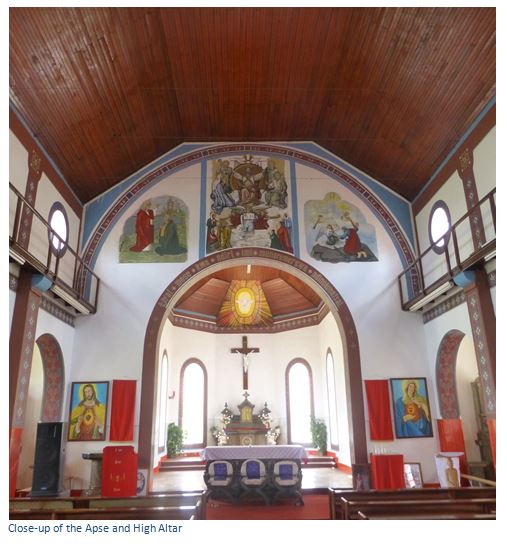 Fathers and Sisters and supporters of the Church’s ideals have been buried at the Cemetery for well over a century. The earliest grave is that father Augustus Law who died at Umzila’s kraal of fever on the 25th November 1880.

John Bradburne of Mutemwa near Mutoko was buried here after his death in a separate row of crosses to commemorate those who died in the Liberation War, including the seven white missionaries who died at St Paul’s Mission at Musami in the Mangwendi Communal lands.  The seven killed were Sisters Epiphany Schneider (71), Ceslaus Stiegler (59) both from Bavaria, and Magdela Lewandowski (42) from Kiel. The males were Fathers Christopher Shepherd Smith (33), a Briton born in East Africa and Martin Thomas (45) from London, the two were Jesuits and finally Brother John Conway (57) from Trailee, Ireland and Joseph Wilkinson (58) from Lancashire. Their lives are celebrated every year on February 7th with a memorial vigil.

When to visit:
All year around
Fee:
Not applicable, but donations welcomed
Category:
Cultural
Building
Province:
Mashonaland East