The gravesite marked by an iron cross was for many years clearly visible on the left hand side of the Arcturus / Harare road, going from Harare to Arcturus, about 80 metres on the Harare side from the turn-off to the Caledonia Store and Chishawasha Mission road. Today the iron cross is gone, as has all evidence of his grave, although there are signs of African graves along the road verge.

'Lion' and his brothers were from a family of seven children, and he was born in Port Elizabeth in 1848. His family came from Rochester in Kent and settled in Observatory in the Cape. His two brothers , A. H. B. Stevens and George Stevens were pioneers on the Rand and in Rhodesia.

A.H. B. arrived in Rhodesia in 1904, became Editor of the Gatooma Mail and died in Bulawayo in 1944. George was associated with Rhodes and visited Lobengula in 1889.

Charles was known to have been in Rhodesia in April 1891 when he received a prospecting licence and was described as a colourful character, actively prospecting  in the Enterprise Gold Belt area and the Penhalonga Valley, north of near Umtali / Mutare.

He gained the nickname of 'Lion' Stevens through an incident which occurred in 1892. A party, consisting of the Reverend Isaac Shimmin, a Wesleyan Missionary, Stevens and two others, was searching in some bushes for a wounded lion in what is now the Harare suburb of Glen Lorne (originally Glen Lorne farm, Enterprise). The lion charged. The safety catch of Shimmin's gun jammed, but Stevens wounded the lion again, and it attacked him. Stevens stuck his foot out, letting the lion chew his boot, until the rest of the party succeeded in killing it.

Four years later, in June 1896, he became involved in the Mashona Uprising / First Chimurenga.  On the 19th June, Stevens accompanied Native Commissioner Alexander Campbell  to warn people in the Goromonzi area. They had a friendly meeting with Headman Mashonganyika whose kraal was close to Alexander Campbell’s farm, managed by his brother George Campbell. Within an hour of the meeting Chief Chikwakwa’s commander Zhante and Headman Gondo had brought turmoil and George Campbell had been struck down and killed. Alexander Campbell and “Lion” Stevens only managed to escape because they were on horseback and rode through Zhante’s men who shouted that their time would also come.

Stevens owned a farm beyond Arcturus in the Enterprise Valley and knowing the area well joined the Chishawasha Mission relief party as a guide. Chishawasha was the oldest mission in Mashonaland, established in 1891 and the first relief party, led by Captain St. Hill, had been forced to turn back on the outskirts of what is now the suburb of Highlands, but early on 25th June, Captain Taylor of the Natal Troop, with 43 men and a Maxim gun reached Chishawasha Mission from the Newlands and Kamfinsa Park areas.

Within half an hour, the mission was evacuated and Stevens suggested to Taylor that the party use the old 'Prestage road' on its return to Fort Salisbury to avoid a possible ambush. Taylor agreed. The leaders were abreast of some rocks when a shot was fired. The group scattered, but Lion Stevens was killed, shot through the heart.  The Memorial Committee erected an iron cross to mark the spot where he fell on 25th June, 1896.

The final and most intriguing puzzle is that his body may have been exhumed from its burial site at this spot where it was hastily buried before the patrol continued into Salisbury (now Harare) and transferred to the memorial vault at the centre of the Pioneer cemetery. A ceremony was held on 30th October 1898 when between 70 – 100+ human remains from the Mashonaland rebellion were buried in the memorial vault. No record was kept of the names on the metal boxes when they were interred, although searches have been carried out subsequently at the National Archives by EE Burke the archivist and the old Salisbury Council. The staff at the Harare Pioneer cemetery, including Douglas the caretaker who has been there 20 years, were not even aware there are bodies buried under the memorial vault! 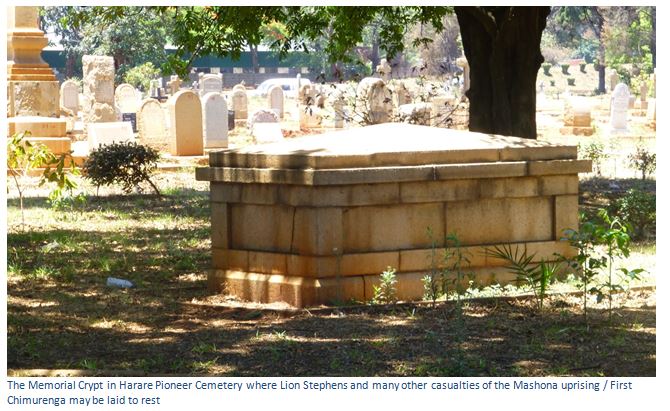 Robin Taylor for guiding me to the gravesite.