Take the Mutare Road from Harare, drive through Marondera. Continue along the A3 Mutare Road for 15.5 KM.  Turn left into Theydon Road signposted Davis Granite and Bernard Mizeki 10 KM; 16.9 KM cross the railway line and turn right at the signpost Tsindi National Monument 11.5 KM. At 25.6 KM reach the Bernard Mizeki Shrine on your right.

Bernard Mizeki was born Mamiyeri Mitseka Gwambe in Inhambane, Mozambique in 1861, he left his home and went to Cape Town, South Africa as a migrant worker just as millions of people continue to do to seek new opportunities and better prospects.

He worked as a labourer for the next ten years, living in the slums of Cape Town, but seeing the disastrous effects of drunkenness on many workers, refusing to drink alcohol. After each day's work, he attended night classes at an Anglican school. Through the work of the Cowley Fathers' mission and particularly the German missionary Baroness Paula Dorothea von Blomberg, he became a Christian and was one of the first to be baptized in St Philip's Mission, Sir Lowry Road, on 7 March 1886. Besides the fundamentals of European schooling, he mastered English, French, high Dutch, and at least eight local African languages. In time he would be an invaluable assistant when the Anglican Church began translating its sacred texts into African languages. Shortly after his baptism, Bernard also started work at St Columba's Hostel, which was run by the missionaries for African men and then was sent to Zonnebloem College to train as a catechist.

In January 1891, Bernard accompanied the new Bishop of Mashonaland, GWH Knight-Bruce, as a lay catechist among the Shona people in Zimbabwe (then Rhodesia) He began work in the Marondera district among the Nhowe people, and settled in the kraal of Mangwende Mungati. Bernard built his home there, and took people into his home to teach them the gospel. In March 1896, Bernard married Mutwa (later named ‘Lily’), an orphaned granddaughter of the Mangwende and a Christian convert.

Although he had the chief's permission to move to a sacred grove believed to be inhabited by spirits of the tribe’s ancestors; he angered the local religious leaders when he cut some of the trees down and carved crosses into others. Although he opposed some local traditional religious customs, Bernard was very attentive to the nuances of the Shona Spirit religion. He developed an approach that built on people's already monotheistic faith in one God, Mwari, and on their sensitivity to spirit life, while at the same time he forthrightly proclaimed the Christ. Over the next five years (1891-1896), the mission at Nhowe produced many converts.

Llewellyn Cambria Meredith (1866-1942) who led Theodore Bent (author of Ancient Ruins of Mashonaland) and his wife to Great Zimbabwe in 1891 and then Beira wrote the following when they arrived at the village of Chief Mangwende: “the kraal of Chief Mangwende was situated on top of a high hill. At the foot of the hill was a mission station of the Church of England run by a Delagoa Bay native named Bernard Mizika Maniyele, a man I was to see a lot of later. There was also a trading station belonging to the British South Africa Company and being run by a British South Africa policeman named James Bennett, a big and rather rough chap who I was also to see a lot of later. The mission station was only two huts of pole and dagga. It had belonged to the notorious Portuguese trader Goveya who had fled on the advent of the British South Africa Company’s forces.”

Despite his approach, many African nationalists regarded all missionaries as working for the European colonial governments and during the First Chimurenga (Mashona uprising of 1896) Bernard was warned to flee. He refused, since he did not regard himself as working for anyone but Christ and he would not desert his converts, or his post.

On the night of 18 June 1896, he was dragged from his home and stabbed. He staggered up the hill behind his house and managed to wash his wounds at the second spring up the hillside and lay down at a small granite outcrop higher up the hill. His wife, Mutwa and a helper found him still alive and went for help and to fetch food and blankets for him. They later reported that from a distance, they saw a blinding flash of lightning on the hillside where he had been lying and heard a rushing sound, as though of many wings. His assailants had also returned to finish him off; but the extraordinary events terrified them and they ran away. When his wife and helpers returned to the spot, his body had disappeared and a great crack had appeared in the rock. Mchemwa, a son of the Mangwende and an ally of the spirit-mediums, was later found to be responsible for Bernard's murder, as well as the destruction of the mission settlement there. 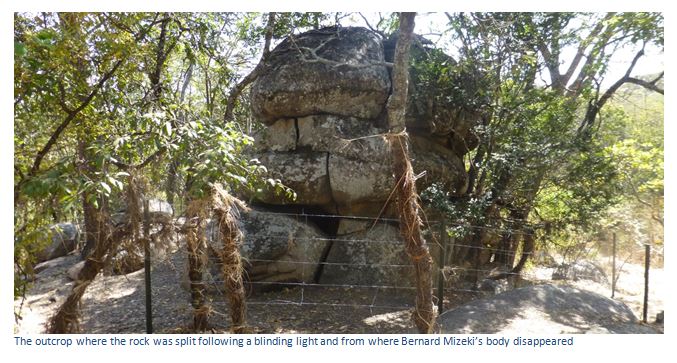 Bernard Mizeki’s work among the Shona bore fruit and the first Shona convert to be baptised was one of the young men whom Bernard had taught: John Kapuya. John was baptised only a month after Bernard’s death, on 18 July 1896 and his grave is close to the shrine. Bernard Mizeki is revered as a hero of the faith in Africa and his anniversary day, 18th June, is regarded as an important day in the Christian calendar. Over 30,000 pilgrims are known to make the journey to his shrine along with the Church hierarchy from Zimbabwe and neighbouring countries.

In 1891 Bishop Knight Bruce pegged a large area near the shrine area including Chief Mangwende's kraal in the name of the Mashonaland Diocese and in 1899 Archdeacon Upcher built an office and an Anglican boarding school for African boys.

In 1936 Father Edwin Crane, the Priest in charge, found the site of Bernard's martyrdom and the collapsed ruins of his hut. He was assured by elders in the area that this was indeed the hut that Bernard Mizeki was sleeping in on the night he was assassinated. It had a hole in the floor where Bernard used to keep his money beneath his sleeping mat which can still be seen today.

Canon Robert Grinham, then headmaster of Ruzawi School, was asked to build a permanent shrine. Father Crane built a suspended floor above the original floor of the hut. The building of the shrine was organised by R.J. Saunders, then Estate Manager at Ruzawi School while Canon R. Grinham supervised the project. Father Crane made the bricks and they were given as a gift by the people of St. Bernard's Mission. Pillars were made from gum trees at Ruzawi School and wings added to the hut to improve the design and to screen the area behind the shrine. Construction was completed in 1937 and the shrine was consecrated by Bishop Paget on Bernard's Day on 18th of June 1938 with Governor Sir Herbert Stanley and many guests present.

On the hill across the valley ,where Bernard Mizeki's assassins had lighted a fire on the night of 17th June 1896 as a sign that the time to kill Bernard had come, a white cross was erected by Father Crane made of iron sheets and painted white. In 1946, the year of the fiftieth anniversary celebrations, this was replaced by a new cross of reinforced concrete which was carried to the top of the hill by Father Stowell and dominates the valley to this day and can be seen from the shrine.

After Zimbabwe's independence in 1980, pilgrimages to Mizeki's grave became popular attracting large crowds and consistent with the Shona tradition of travel to sacred places.

In Heritage of Zimbabwe Publication No. 22 Father Rea considers if Bernard Mizeki’s death was as straightforward as described above and whether his claim to martyrdom is justified. Mangwende’s son Mchemwa and the local spirit mediums held secret meetings before the first Chimurenga (Mashona uprising) broke out at which it was said the ancestral spirits were angry because the people accepted Christian teaching and had consorted with Europeans. He would guarantee them victory over the Europeans if the teacher, Bernard, was killed. So Bernard Mizeki was killed because he associated with Europeans and was a missionary. Father Rea considered him as a martyr because he was warned and could have got away, but thought it was his duty as a Christian to stay and risk his life for his converts. 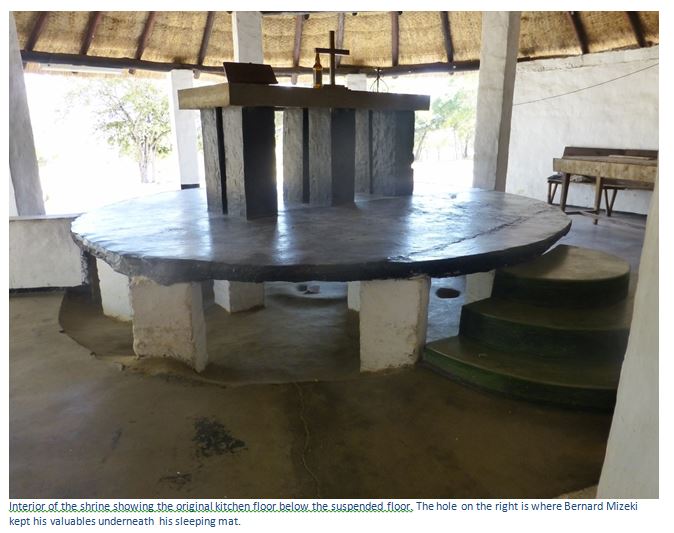 Father Rea does not mention in his article, but the first murders of the Mashona Rebellion (First Chimurenga) were the Norton family on Wednesday  17th June 1896 and this news had reached chief Mangwende and his son the same day; the message beaten out from kraal to kraal by drummers.   That same night Bernard Mizeki was dragged from his hut and mortally wounded and was the first casualty in the Marondera area because of his attachment to the Anglican Church and its traditions and belief ran counter to traditional Shona customs and because they were equated with the beliefs of the BSA Company and its governance and his murder remained unknown to the white community for many months.

For three days there were no further killings in the area and the tiny European population were unaware of the general uprising and carried on trading and travelling on the main road. Three days later on Saturday 20th Captain Bremner was murdered in his bed as James White was in his garden at Mendamu Farm and mortally wounded.  Molimile Molele, the Methodist catechist at Nengubo Mission came to White’s farm with a scotch cart and took him back to Nengubo mission where they were attacked and both Molele and White killed.