The Anglo-South African, or Boer War, raged from 1899 to 1902 and Rhodesia (now Zimbabwe) played a full part in the fighting, with the Rhodesia Regiment and the BSAP both at Mafeking and along the border of the Bechuanaland Protectorate (now Botswana) This movement of troops to the south happened only a few years after the Matabele (First Umvukela) and Mashona (first Chimurenga) uprisings of 1896-7; so due to local concerns, a number of troops from Australia and New Zealand were diverted through Beira.

The Rhodesian Field Force (RFF) as it was called under the command of Lieut.-General Sir Frederick Carrington faced tremendous logistical challenges. The railway line from Beira to Umtali had been opened on 4 February 1898, but only in 2ft gauge, and in 1900 was being converted to 3ft 6inch gauge. The railway line from Umtali to Salisbury had been built as 3ft 6inch gauge and opened on 23 May 1899; Salisbury and Bulawayo was still unconnected by rail.

The Australian and New Zealand Troops faced long delays on the train journey at Beira and Gondola (75 mile peg) and again at Vila Machado (Bamboo Creek) due to construction work on the conversion of the rail gauge.  Medical facilities were very primitive in Portuguese East Africa (PEA -now Mozambique) and many soldiers caught malaria which manifested  itself as fever once they arrived in the cooler Eastern Highlands of Umtali (now Mutare) and sixteen of the deaths occurred at  Umtali. From there they were sent on by rail to Marandellas (now Marondera) where there was a training base and hospital.

From Marondera the soldiers travelled to Bulawayo, either by Zeederberg coach if they were officers, or by ox-wagon and foot if they were other ranks. They travelled through Fort Charter, Enkeldoorn (now Chivhu) Umvuma (now Mvuma) Iron Mine Hill, Gwelo (now Gweru) and then Bulawayo; this slower journey taking up to 25 days.

The original tented base camp at Marondera has been completely built over, but the Paradise Plot cemetery is one of the most easily accessible Anglo Boer War gravesites in Zimbabwe.

There is no evidence the grave markers are on the correct graves; see the notes below. 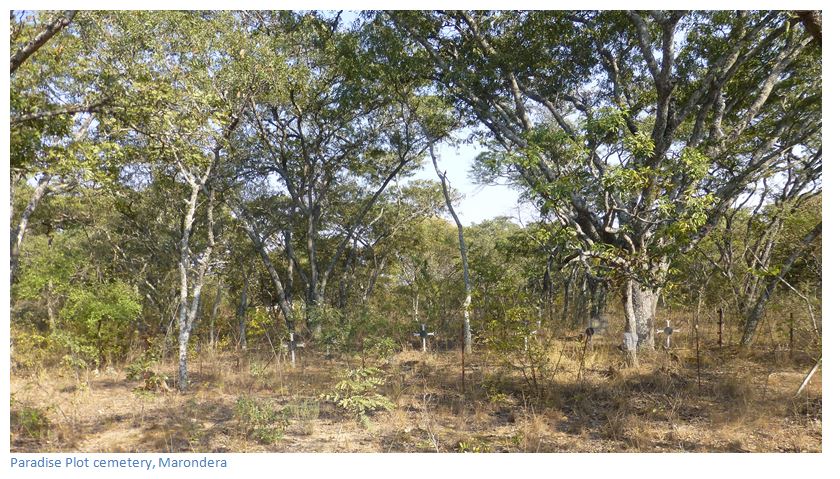 Most soldiers contracted fever in the unhealthy swamps of PEA and received medical attention at the Marondera hospital which resulted in their recovery; others developed complications and died enroute.

The locations of those that died are as follows:

My spreadsheet tracking the casualties started with 35 names from The Official Boer War Casualty Rolls 1899-1902 British and Empire Army which lists 54,931 fatalities. I added 13 names from the sources listed by Rob Burrett in his excellent and comprehensive article on this subject and took out 9 names that did not appear in any of the source references.  Col. Hickman, acknowledged below, also did a great deal of research on the subject.

The various causes of death in this country are analysed below: 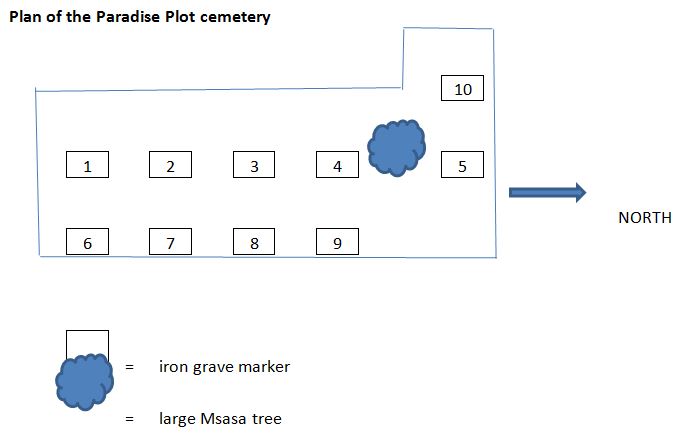 I have used the same layout as Rob Burrett’s cemetery plan so as to reduce confusion; when you read the source evidence you realise how much of the material is contradictory. As Burrett notes, this seems to have arisen because many of the casualty reports came from the RFF base at Marandellas, rather than from where the person died, so when in doubt they simply put Marandellas. For example, for QM Sgt. Walton I have a contemporary account of his death and burial at Iron Mine Hill by a colleague, yet the record states Marandellas. Col Hickman raised doubts about Studdart, for whom there is a grave marker at Paradise Plot cemetery, but actually Tpr James Hastie Stoddart was killed in the 1897 Mashona Rebellion, or First Chimurenga and is buried at Ruzawi School about 6 KM’s away, this all results in some confusion in the records. [See Mashona Rebellion / First Chimurenga 1896-7 graves at Old Marandellas (Ruzawi Cemetery on the website www.zimfieldguide.com] 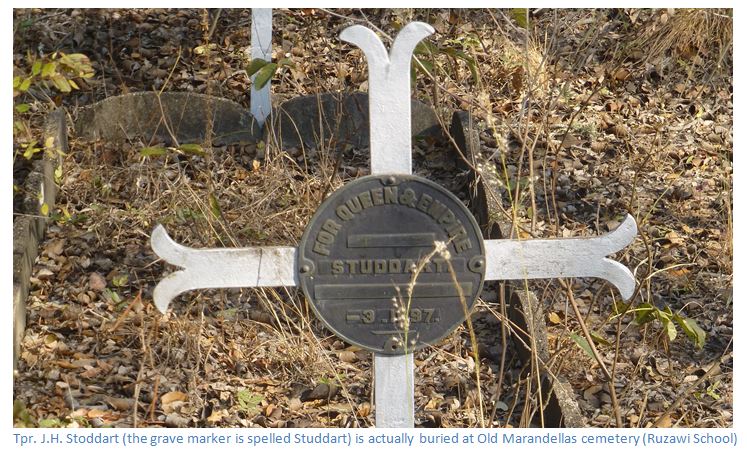 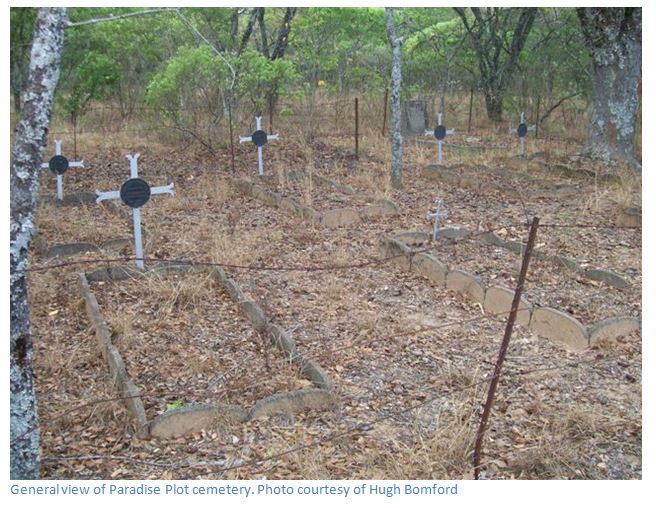 Some of the confusion arises because a number of different parties were involved. First, the BSAP compiled lists of the names of those buried at each site around the country before 1908. Lists were then drawn up by the Guild of Loyal Women (GLW) that were sent to be cast as the familiar circular cast iron markers by the Gregory iron foundry firm in Cape Town. Those who died prior to the death of Queen Victoria on 22nd January 1901 are headed “FOR QUEEN & EMPIRE” and those after are “FOR KING & EMPIRE.” Gregory made mistakes on the castings. The BSAP then placed the grave markers, but not always on the correct graves; so the current positioning of the grave markers should always be treated with caution.

As Burrett further notes those who died in 1900 were Australians and New Zealanders and unknown to local people; additionally the record keeping of the military was often poor; particularly at a position such as Marondera where the town barely existed and the population was very small.

Burrett goes into the arguments for and against the accuracy of the positioning of the current grave markers in a lot of detail and for the purposes of this short article I have accepted his initial reasoning and conclusions.

Grave 10 dates from 1935 and is ignored hereon as it is clearly outside the period being considered, but as the records indicate there are seven RFF graves at Marondera, a further two need to be eliminated. Graves 8 and 9 appear to be the latest; Grave 8 has a granite slab and Grave 9 has a tin plate cut in the shape of a heart and both appear to be civilian burials unrelated to the others.

The normal pattern of laying out graves is to have them in date order of burial in rows making Grave 1 of the above plan the earliest.  All those buried here are Australians; except for the New Zealander Pte F. Saxon. In date order and following the cemetery plan this would be as follows, however Rob Burrett follows the grave markers which I believe to be incorrect:

Grave 3 – Capt. H.C.W. Hamilton. List 1 and List 3 give his date of death as 12 May 1900, List 5 and List 8 state 8 July 1900 and List 7 states 7 July 1901. The Gregory cast iron marker states 12 May 1901, which is clearly incorrect, as even the GLW list sent to the Gregory iron foundry states 12 May 1900. As the incorrect date used by the Gregory iron foundry is after Queen Victoria’s death; it is marked “FOR KING & EMPIRE.”  Because he is not listed in the official Australian casualties, Burrett thinks he enrolled as an independent volunteer in South Africa and this seems plausible. Burrett quotes The Tasmanian Museum and Art Gallery, Hobart, which has a letter from Capt. William McKnight to his fiancée “Belle” dated 10 July 1900 which says: “There was a civilian clerk left here [Marandellas] but he is out of his mind, also a Captain Hamilton under my care who has gone to the dogs with drinking and morphine. No orderly would stay with him and I was afraid he would commit suicide. I had a bad time. I managed to get him into the hospital, so that was a relief.”  He wrote again on the 13 July 1900 saying: “Captain Hamilton, I regret to say, died yesterday and was buried close to the camp.”

The date of 12 July 1900 therefore seems the most reliable, the third death. Burrett / grave marker has him in grave 1. 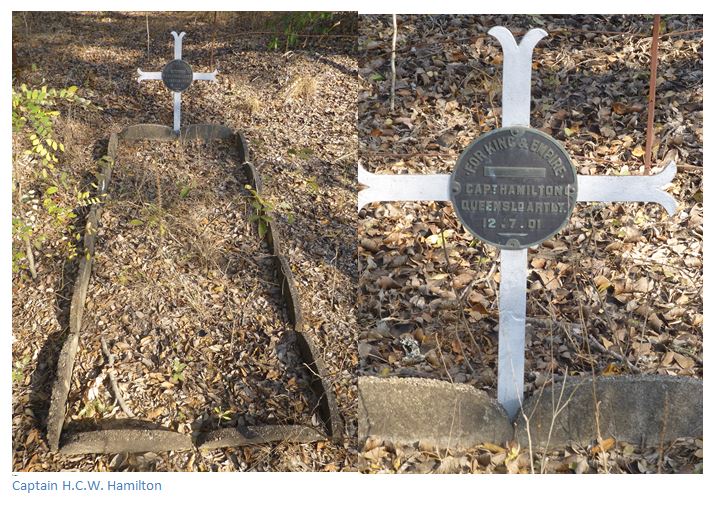 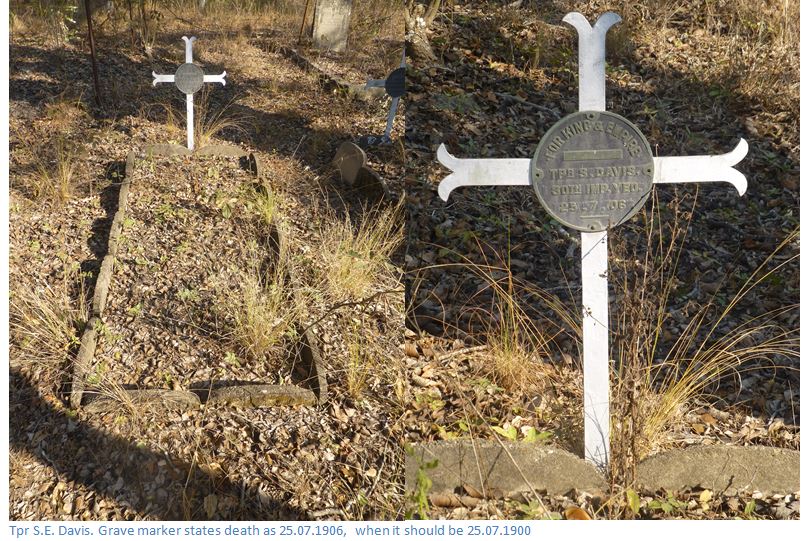 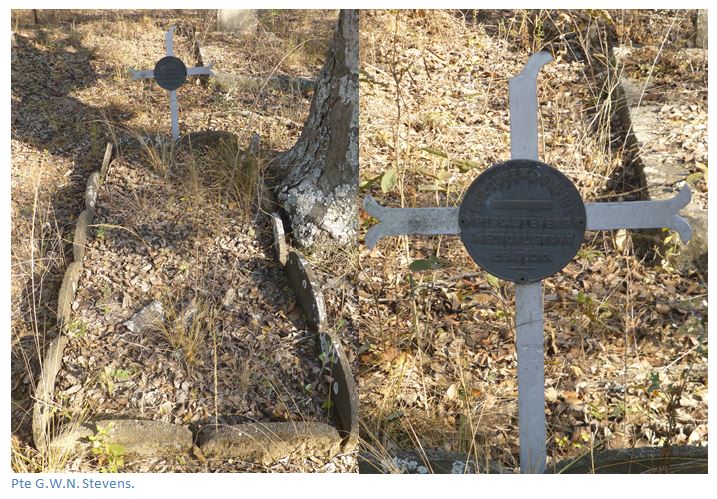 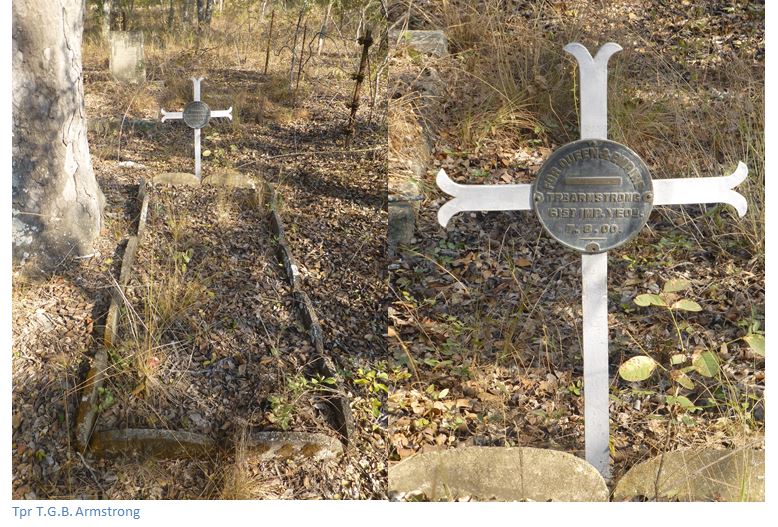 Grave 7 – Pte J. Kiley. Lists 4 and 7 give his date of death as 13 October 1900, the seventh death. List 3 has his name, but not a date, or place of death. Burrett puts him in grave 2. He has two grave markers; one was made locally probably by a local farrier, or his colleagues. The Gregory iron foundry grave marker is misspelled as Kelly and the date needs correcting. There was a Kelly, or Kelby, who died at Enkeldoorn on the 3rd July 1900 and this maybe where the surname error crept in. Burrett / Gregory iron foundry grave marker has him in grave 2. The locally made grave marker puts him in grave 7, which I believe is correct. 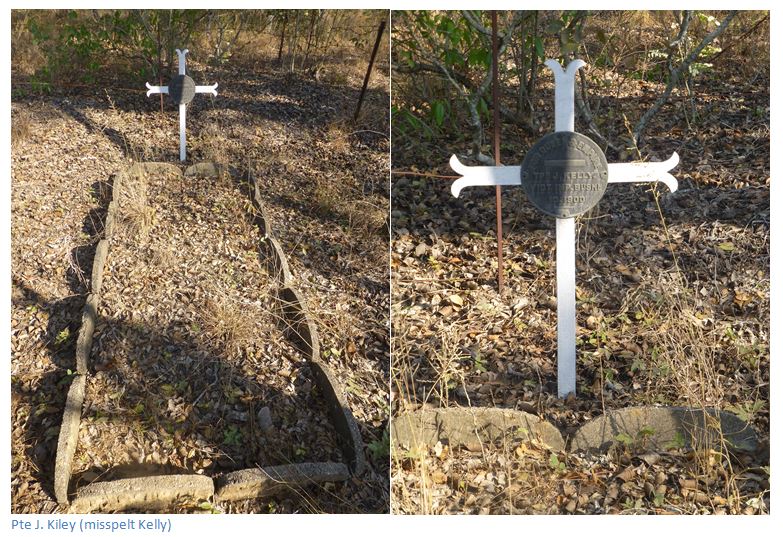 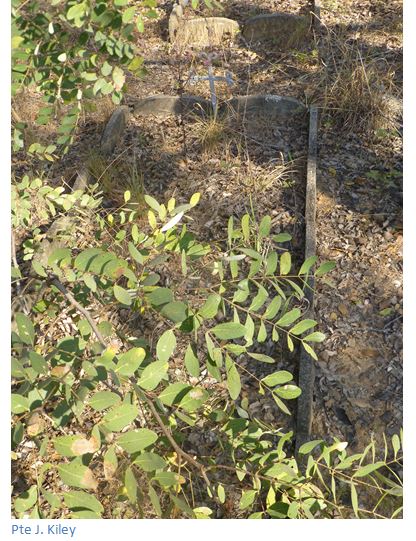 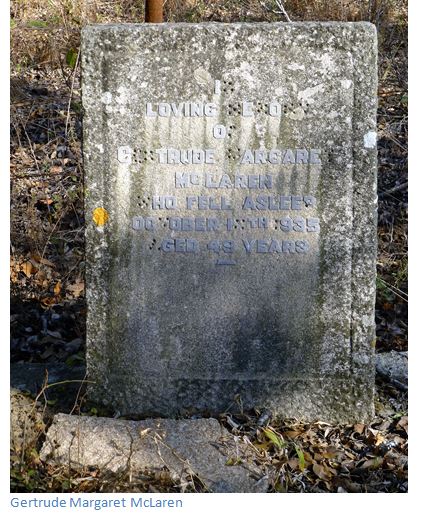 List of those buried at Paradise Plot, Marondera with suggested gravesites

A. Doyle. Thanks for additional information from the Kew Medal Rolls.

List 6 - Rhodesian Field Force Casualty List in S.H. Gilbert 1901. Rhodesia and After: the story of the Sharpshooters. London. Simpkin & Marshall, Hamilton & Kent & Co. and Col. A.S. Hickman as above

List 7 - Text references in Col. A.S. Hickman as above