Home > Mashonaland Central > Traditional Leaders in Zimbabwe are still seen as influential, but in all provinces citizens overwhelmingly want them to stay out of politics

Traditional Leaders in Zimbabwe are still seen as influential, but in all provinces citizens overwhelmingly want them to stay out of politics

On 16 May 2018  Justice Garainesu Mawadze of the Masvingo High Court issued a judgement banning all traditional leaders from partisan politics and the President of the Chiefs Council – Chief Fortune Charumbira, and the National Chiefs Council (representing all 282 Chiefs in Zimbabwe) was banned and prohibited from making further political statements on their involvement or allegiance to ZANU-PF on any public platform.[i]

Conducting of campaigns on behalf of the ruling party by traditional leaders (chiefs, head persons or village heads) was declared unconstitutional and a violation of the right not to be treated unfairly in a discriminatory manner on the basis of political affiliation.[ii]

Afrobarometer conducts non-partisan research surveys across many African countries - round 8 surveys for 2019-2021 were conducted in 34 countries on the African continent to provide reliable data on African experiences and their personal evaluations of democracy, governance and quality of life.

In Zimbabwe the Afrobarometer team led by the Mass Public Opinion Institute (MPOI), interviewed 1,200 adults in face-to-face interviews in the language of the respondent’s choice during April 2021. A sample of this size yields country-level results with a margin of error of +/-3 percentage points at a 95% confidence level.

This report is from Dispatch No 469 of 3 August 2021 that was led by Stephen Ndoma. The graphs below and the conclusions drawn are all from their report.

The role of traditional leaders in Zimbabwe

Zimbabwe’s Constitution and the 1988 Traditional Leaders Act define the role of traditional leaders. They include:

Why the need for this survey on traditional leaders?

However despite the above, traditional leaders in Zimbabwe have been accused of dabbling in politics, typically in support of the ruling ZANU-PF party and in restricting any political gatherings of opposition political parties, particularly in rural areas. Opposition parties say ZANU-PF buys their loyalty through subsidized vehicle-purchase schemes and electrification of their homes. 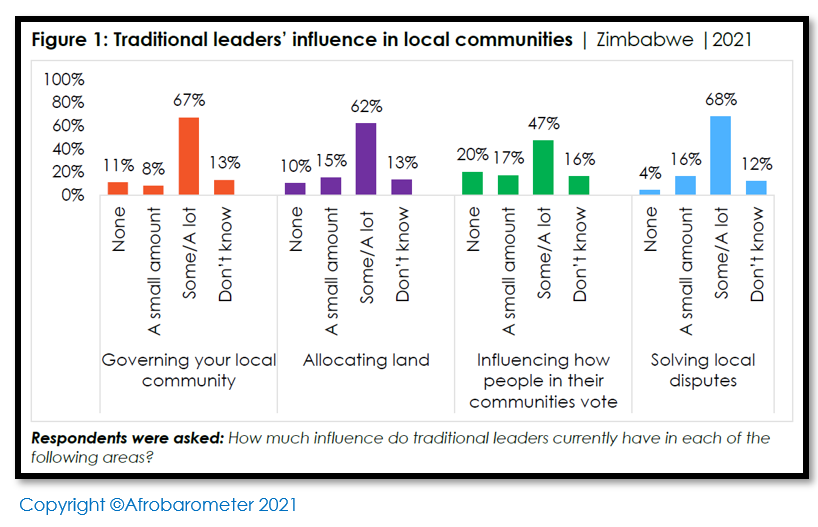 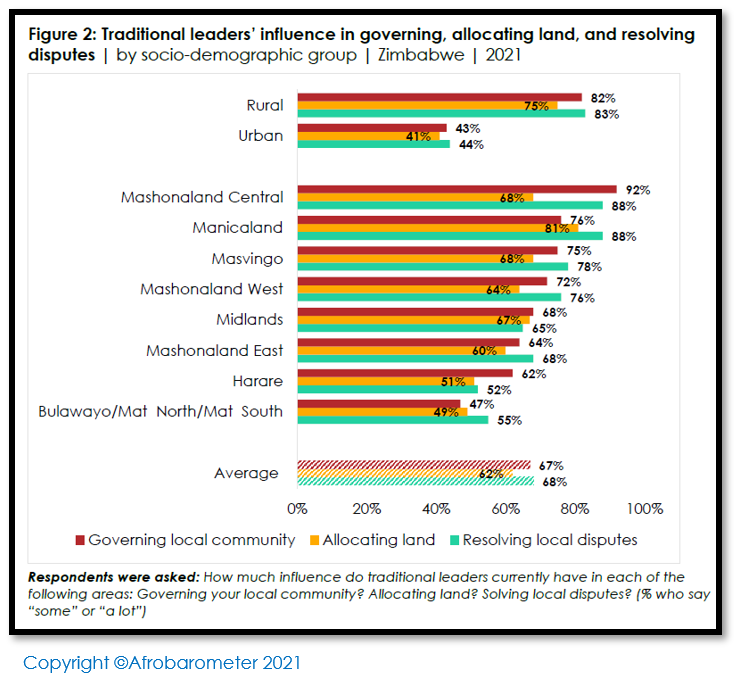 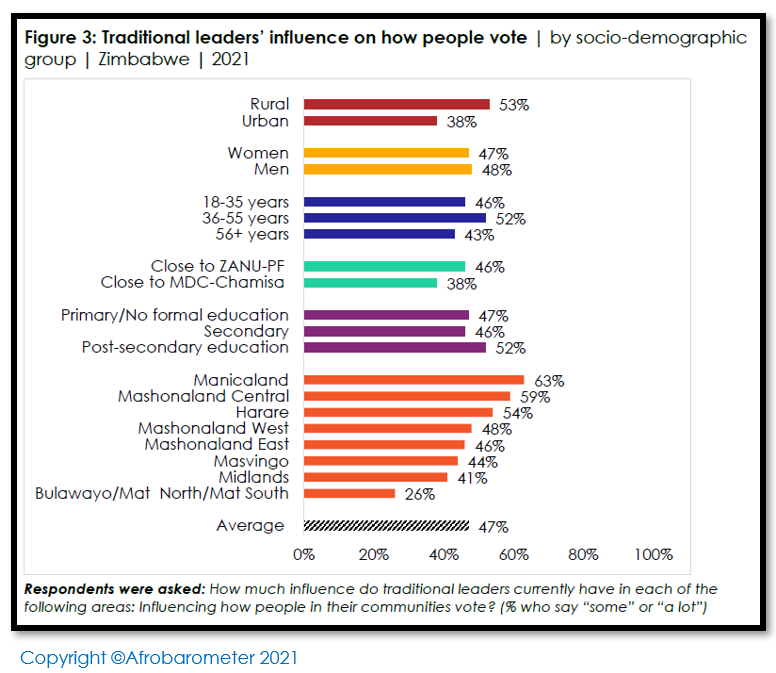 Below half (47%) say traditional leaders have significant influence on how people in their communities vote with more support in rural areas (53%) than in urban areas (38%) and less support from those that support opposition parties (38%) Manicaland citizens were strongest in their confirmation of how much traditional leaders affect citizens’ votes (63%); again Bulawayo and Matabeleland were the lowest (26%)

Just under half of Zimbabweans think the level of influence that traditional leaders exert should stay the same (49%); most don’t want it to increase (24%) or decrease (13%). 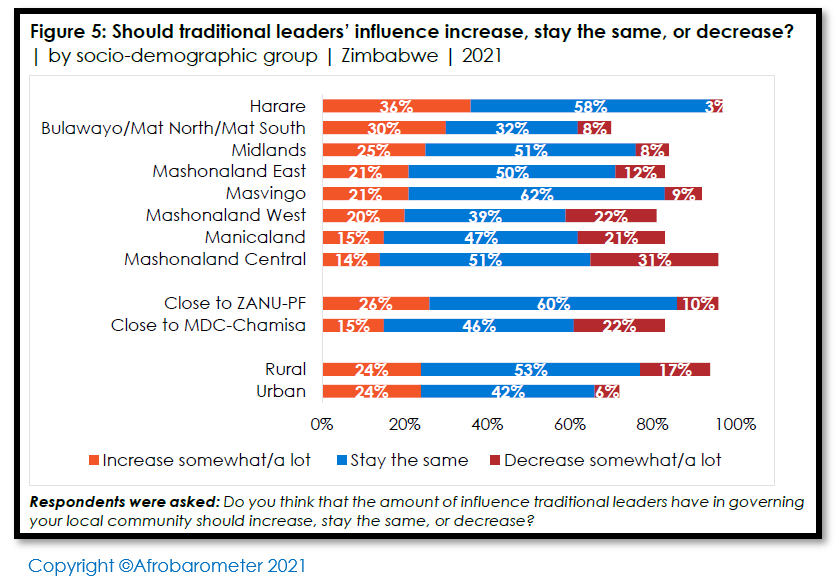 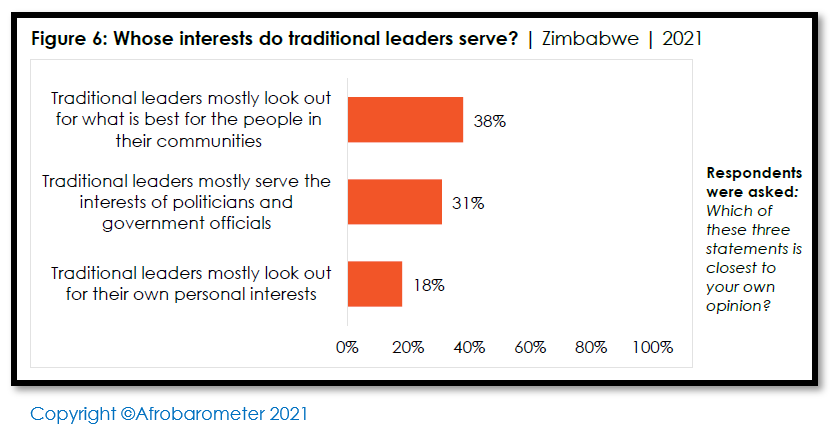 Zimbabweans were somewhat divided in their views on whose interests traditional leaders serve – citizens in their communities (38%) politicians and government officials (31%) or their own personal interests (18%). 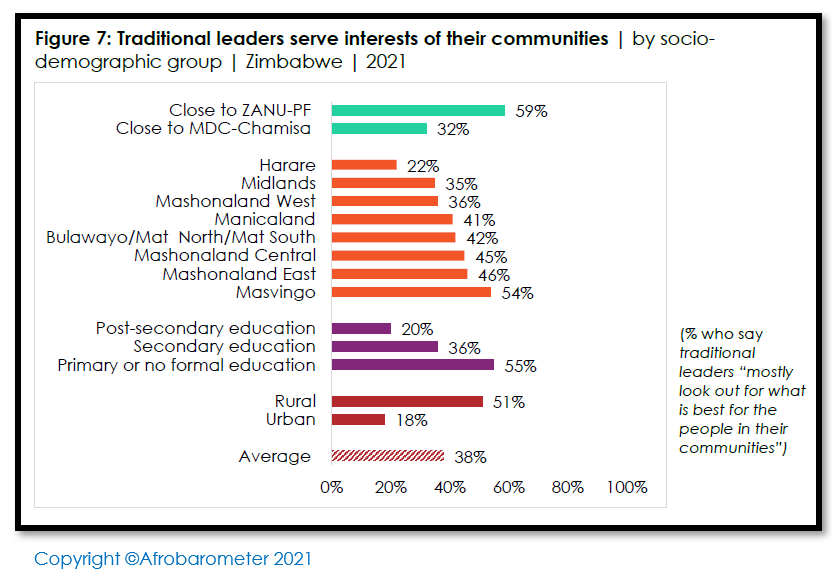 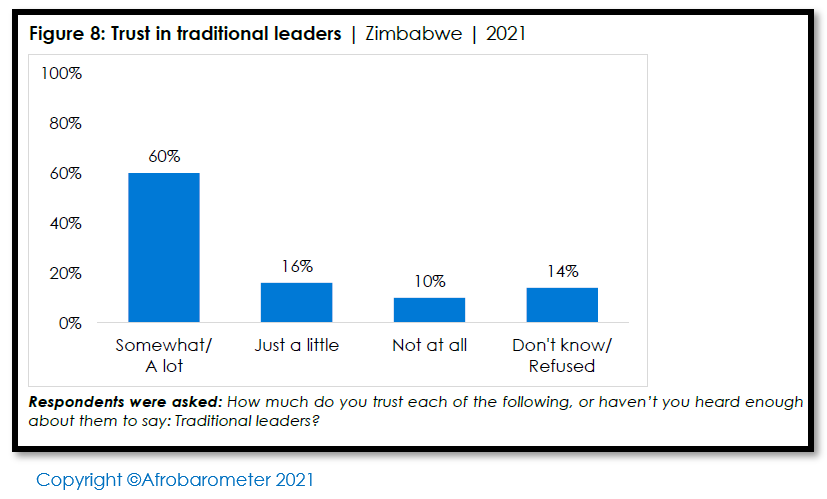 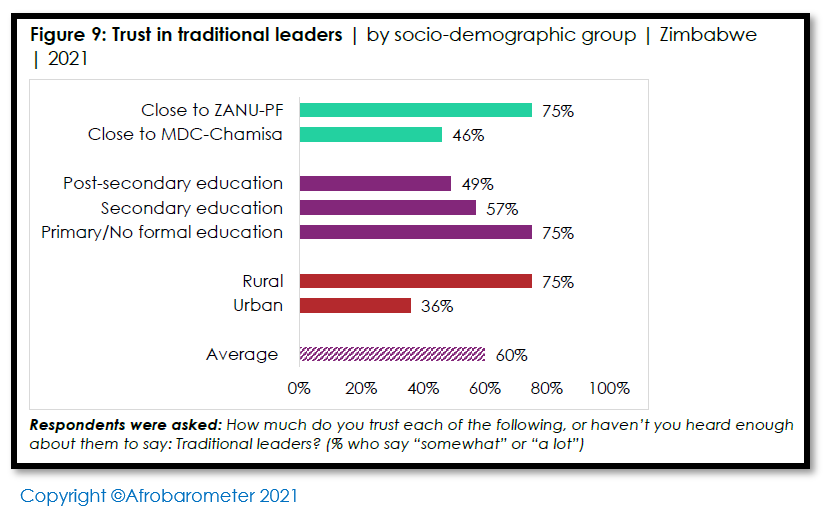 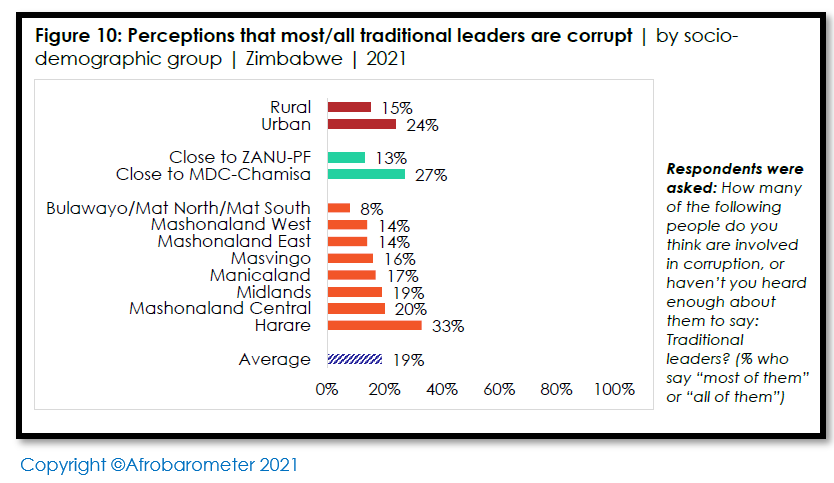 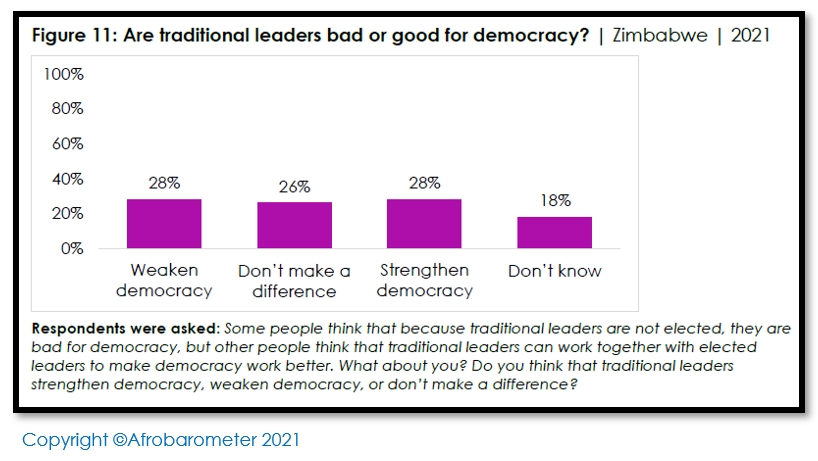 Zimbabweans were split on the question of whether traditional leaders are good or bad for democracy: 28% believe they make democracy stronger, 28% say they weaken it, and 26% say they don’t make a difference. 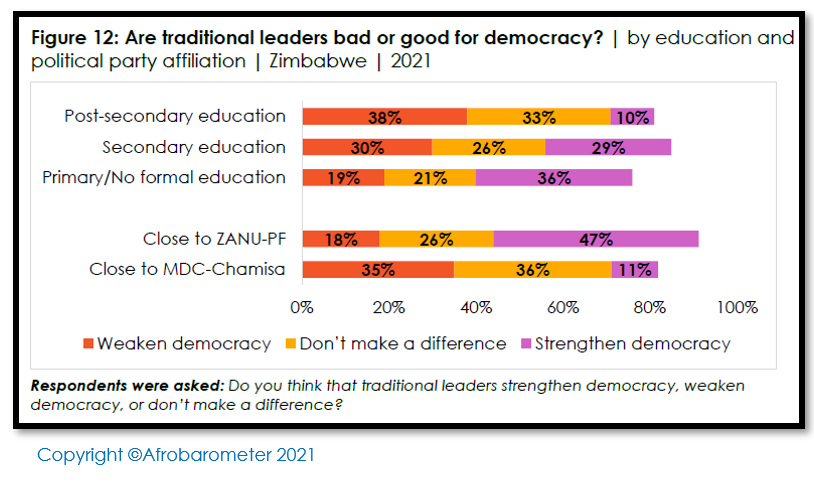 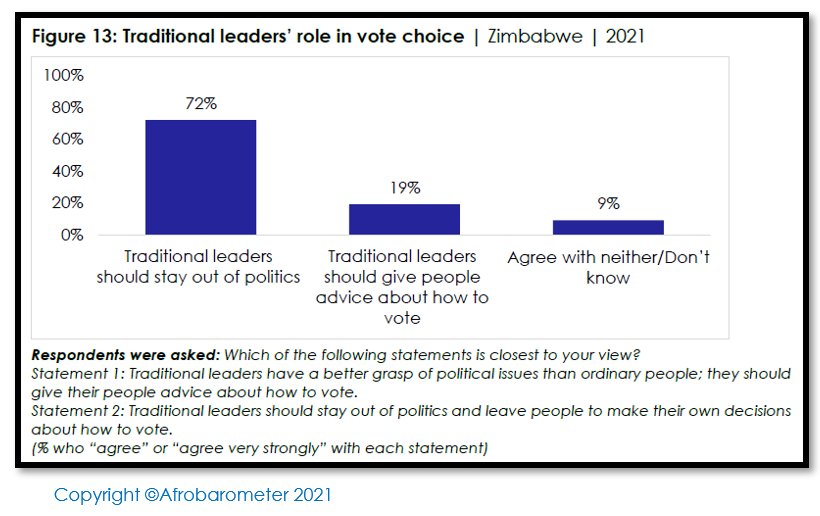 Zimbabwe citizens had deep-seated views that traditional leaders should keep out of politics (72%) and refrain from giving advice on how to vote. This view that the people should decide themselves how to vote came over loud and clear. 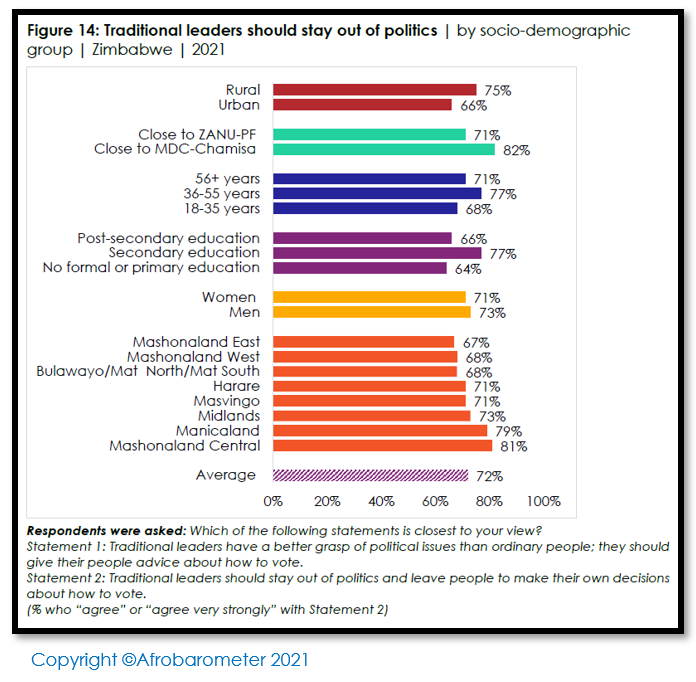 For more unbiased research on Citizens views throughout Africa go to: www.afrobarometer.org/online-data-analysis

Afrobarometer. Stephen Ndoma. Zimbabweans see traditional leaders as influential but want them to stay out of politics. Dispatch No. 469 | 3 August 2021