The Western cave also has a mass of paintings, but most are now rather faded and indistinct. The floor of the cave is covered in lumps of dhaka and rocks that appear to have been transported into the cave, some look as they have been used as grinding stones or querns.

At the front right of the cave, beneath a cache of weapons and bags, a line of dancers (men, women and children) all with attenuated limbs, mostly with headdresses, some holding sticks, are painted in black pigment.

Peter Garlake describes a line of 29 men, in black, with long thin legs and large feet, some divided to form two toes. They wear aprons or tails and have tufts above their aprons. Their hair is long and on end. Three are armed. Some carry switches or rattles. Behind them are their weapons and bags, hanging from branches, on one of which a warthog head is impaled. This may well be a dance, the near absence of weapons; the tufts worn on the buttocks, the location near a camp, the rattles, the uniform rhythmic postures are all suggestive of this. The eighth figure in the line from the left holds his arms rigidly in front of him, suggestive of dancing and the start of a trance ceremony.

On the far left and separate from the line, a male in an elaborate headdress faces outwards towards a woman who appears to be offering him some object. Above the frieze two women painted in white face each other – Garlake states they confront each other. 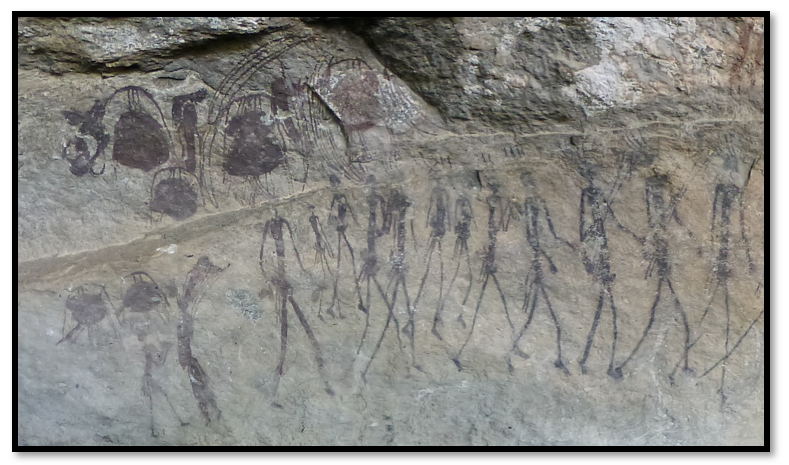 Section of the above described scene 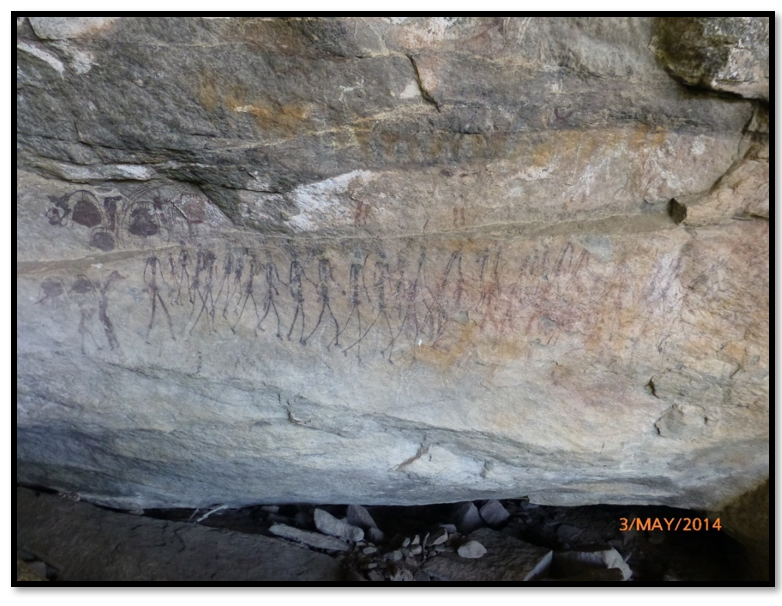 At the time I visited, the day was very overcast and with the lower light levels it was difficult to discern some of the images. 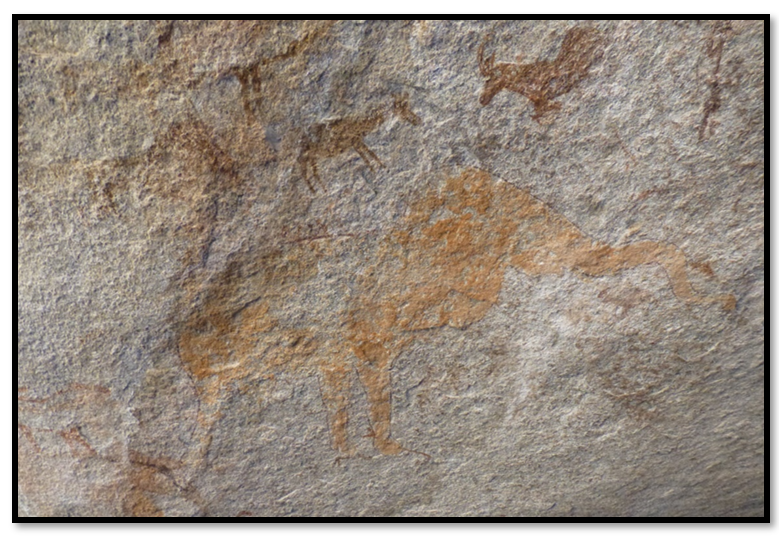 The roof is dominated by a large faded yellow ochre elephant which has been outlined in red, around are characteristic kudu in red ochre, small antelope, buffalo, sable and zebra. 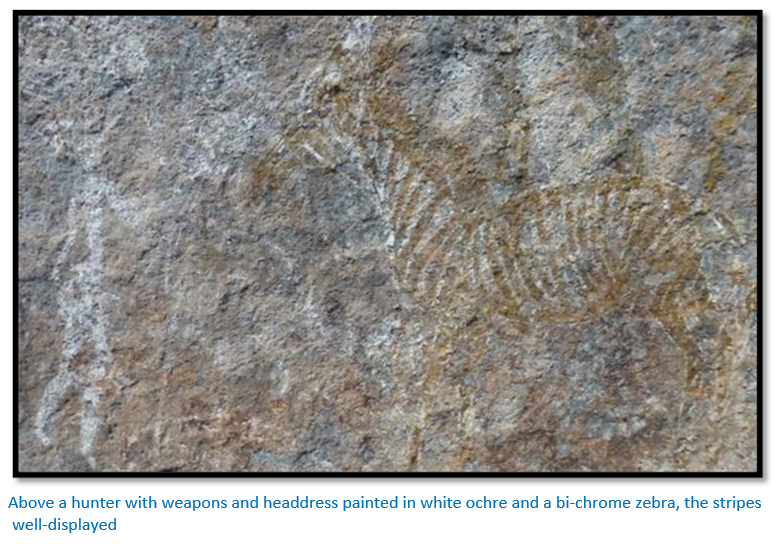 Above a hunter with weapons and headdress painted in white ochre and a bi-chrome zebra, the stripes well-displayed

On the left wall there appears to be an outline of an elephant enclosing a mass of animals – including kudu and some beautifully drawn, small, bichrome buck, as well as buffalo, rhino, bush pig, sable and zebra, a few painted in black paint and outlined in white.

The photo shows a crowded scene of small animal paintings that have been over-painted by some later crude clay images of animals and humans. 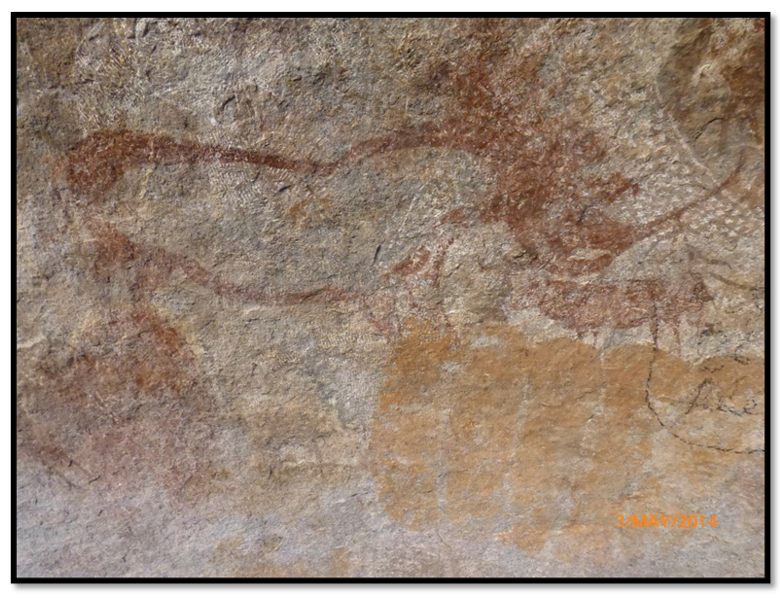 There are a number of characteristic oval forms in red or yellow ochre outlined in white and with white caps. These are San symbols reflecting the presence, control and release of potency, although often the white paint has faded entirely away. In the above photo, a field of white dots enclosed with white lines can be seen streaming away from the oval. Often they enter the oval through a narrow through a single narrow entry point – for this reason they were often described as bee hives in the past. However, here they flow outwards from the entire width of the oval and over the head of a rhino…the rhino’s body in outline, its head filled-in with red ochre. There appears to be a large figure of a hunter with shoulder bag painted in white on top of the rhino, but the image has faded significantly.

The ovals seem to convey a concept of potency to the San referred to as n/um. During a communal trance dance the n/um becomes activated and causes a pricking sensation within the dancers stomach. When active the San believe the n/um overflows, ‘boils over’ and is released up the spine of the dancer. The pricking sensation: like ‘thorns, ‘arrows pressing the flesh’ or ‘bee stings’ is conceptualised as the white dots above the oval. 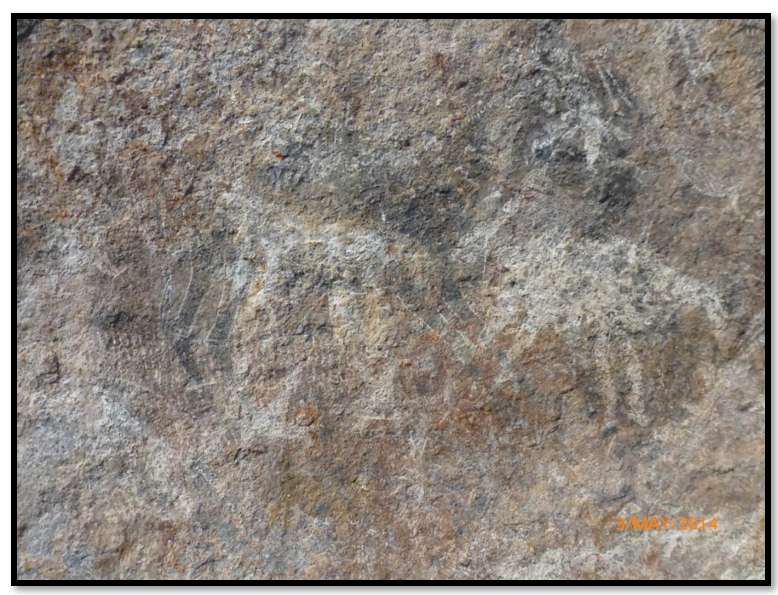 An image of what appears to be a zebra painted in black and outlined in white with white vertical lines representing its mane. Underneath two crudely drawn humans painted white and crouched over, apparently in trance.

On the rear roof are some large-faded antelope (>60cm) and a hippo.  Towards the floor of the cave is a therianthrope painted as a crouched figure with antelope ears, baboon tail, hooves, human legs and torso and tulip penis. 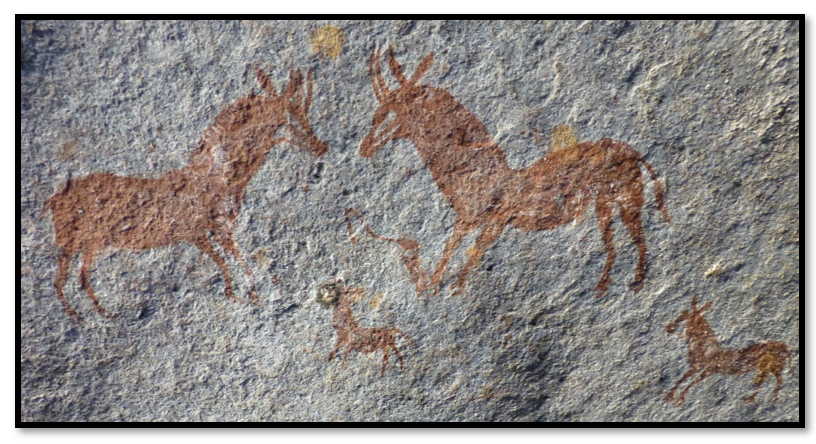 A herd of sable, the lower two animals drawn smaller, perhaps an early attempt to draw in perspective (?) the muzzles left unpainted to indicate the white sable markings – their sable body shape is not as accurate as usual in San rock art.

The large amount of pottery and dhaka and numerous cupules (small round holes) worn into the granite may indicate that this cave was used in comparatively recent times for rain-making or initiation ceremonies. 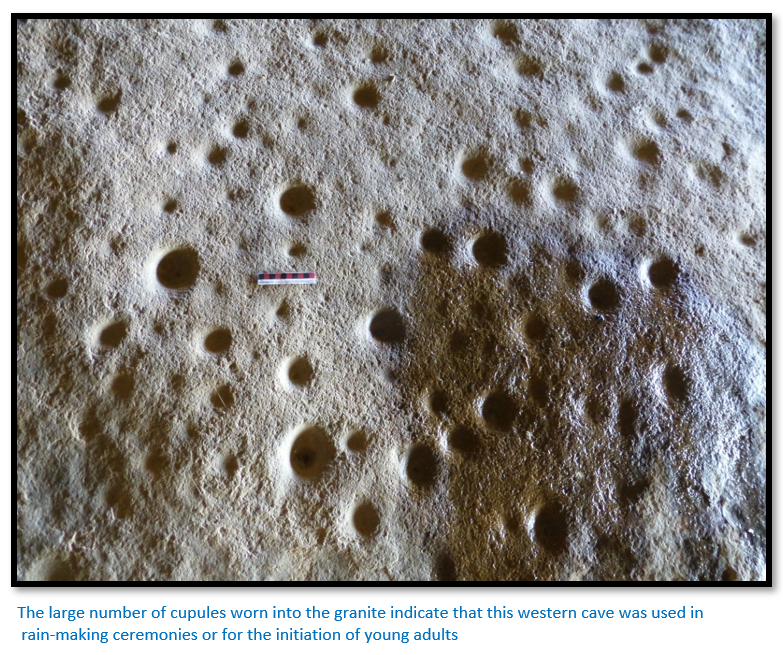 In 2014 there was also evidence of fire-making within the cave which will quickly destroy the rock art images, as has happened at Makumbe cave, the article is under Harare on the website www.zimfieldguide.com