The Southern cave is very easy to enter at ground level under a fence that has been erected to keep out stray cattle. There is a mass of paint remains on the western side; the original paintings were probably ruined by cattle being penned in the cave and rubbing up against them at some time in the past. 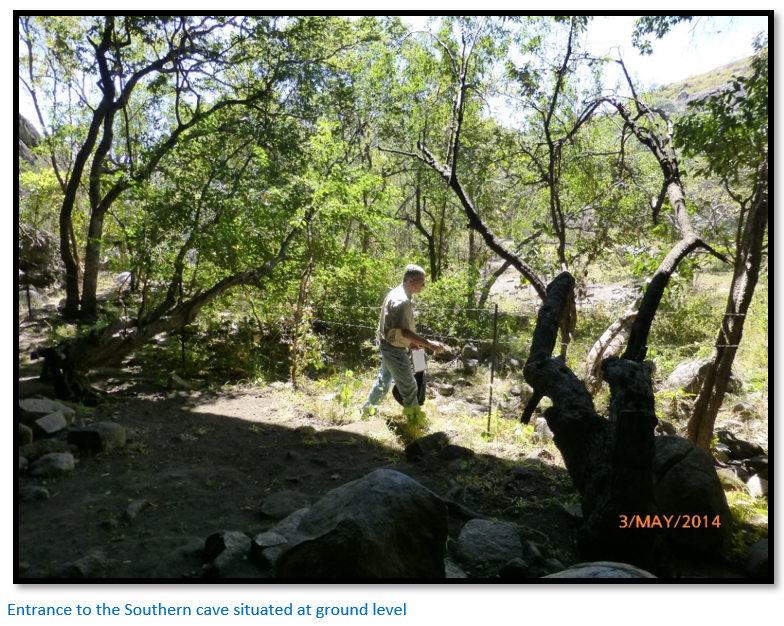 The largest painted objects are four large elephants, one filled in thick orange, another black, the third in ochre pigment, and the last is painted in a white clay material. To their right the remains of another two large elephants drawn in thick white paint are discernible; the leading one has lost its head and forelegs, the rear one only has its head, tusks, and trunk remaining. 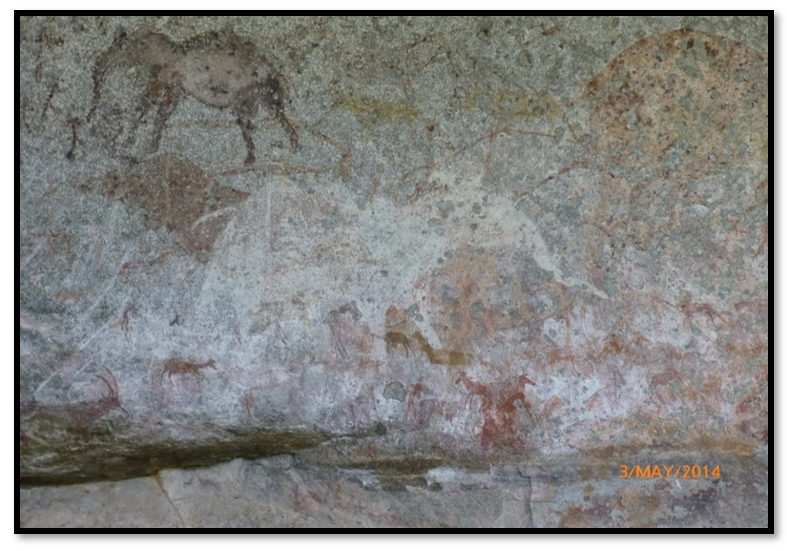 The central frieze has a mass of superimposed painted images, mostly in red and yellow pigments, but also rarely for Mashonaland, figures painted in white, including a magnificent hunter wearing a headdress and holding six arrows upright in his right arm, his bow and a single arrow in his left arm. Superimposed over his feet are the finely drawn horns of a kudu bull in yellow ochre outlined in white. 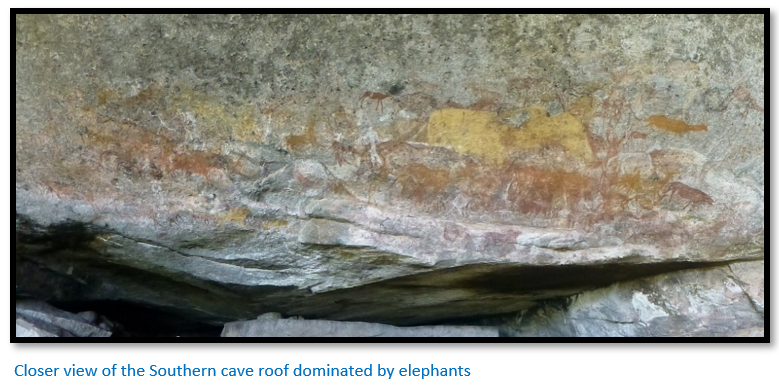 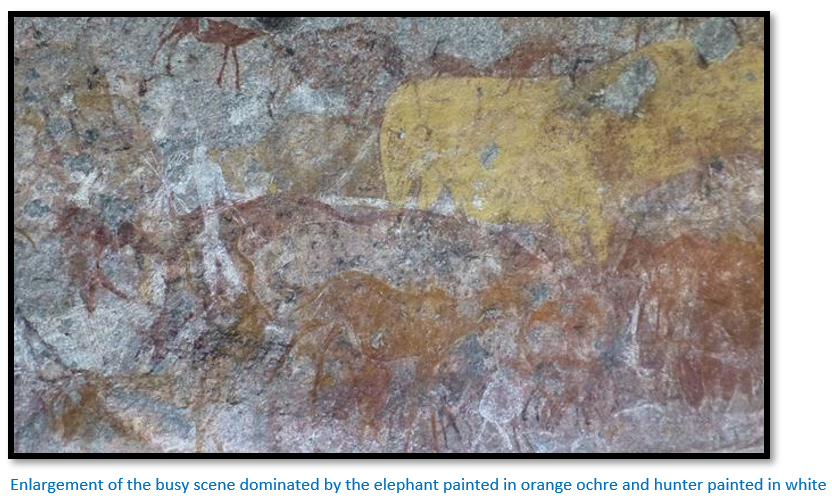 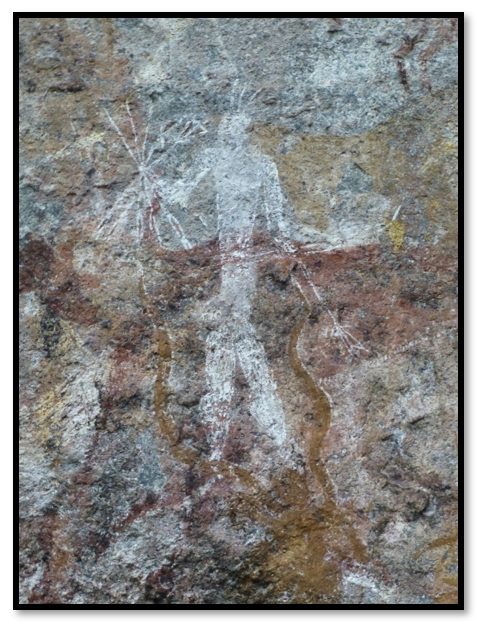 There are many images of male and female kudu, a number with their bodies outlined in white pigment, zebra with their stripes highlighted in white, tsessebe, a yellow feline (possibly a lion) and buffalo with some hunters painted in white. 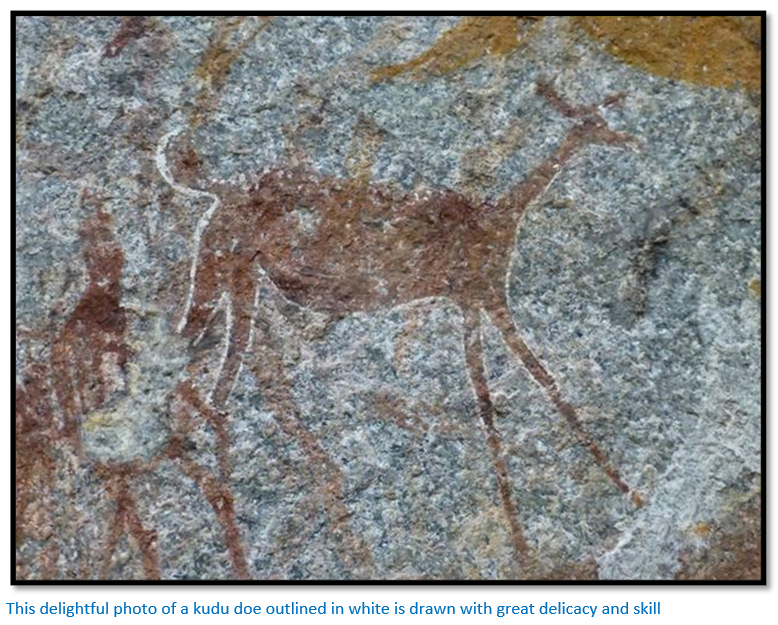 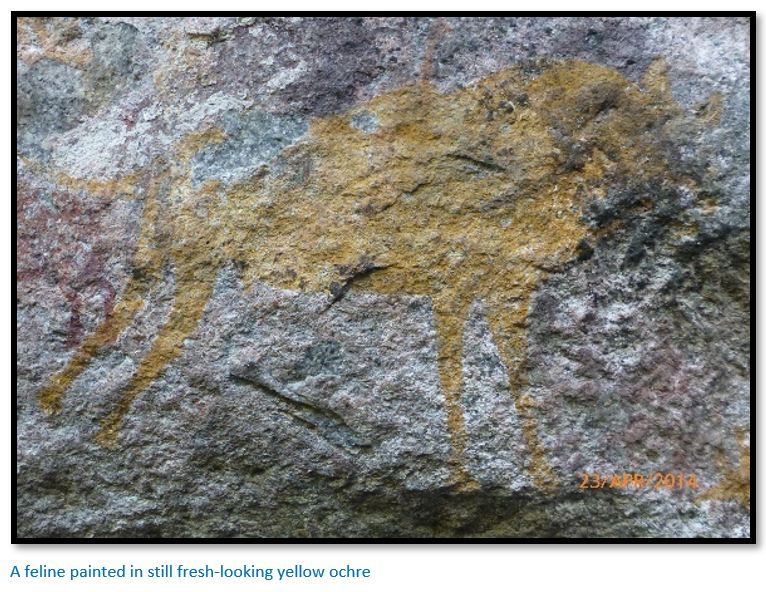 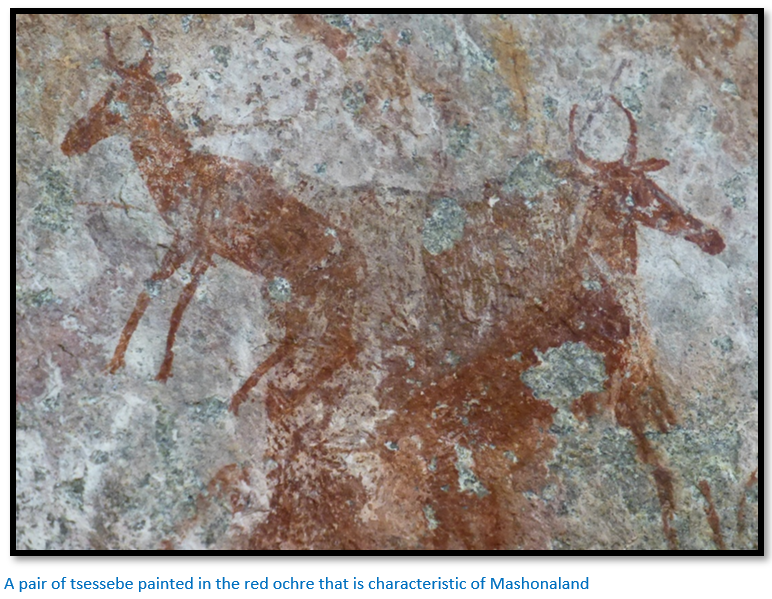 Other images include a large antelope torso upside down, a group of warthog and a single warthog shown below, its’ tusks drawn in white using a twisted perspective technique. 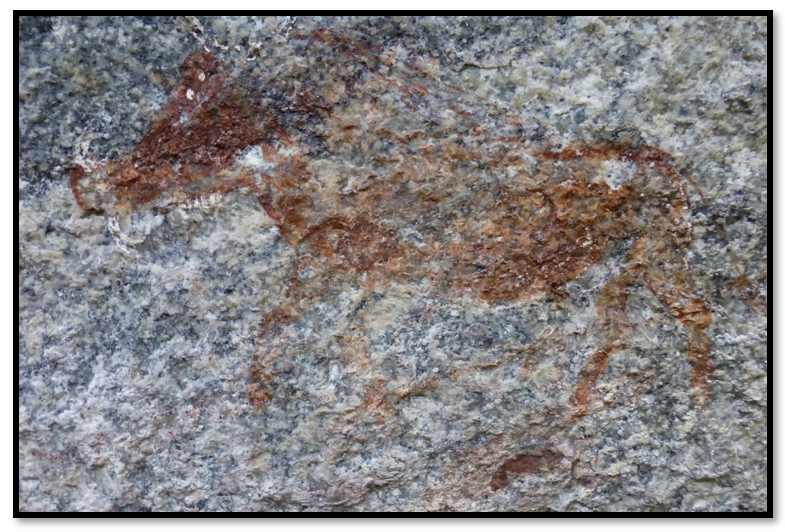 At the front of the cave is another trance scene comprising a line of 18 women and children dancing, some wearing rattles on their necks and holding short sticks, their stomachs extended from the effects of n/um. Nearby are the familiar weapons and shoulder bags laid out. 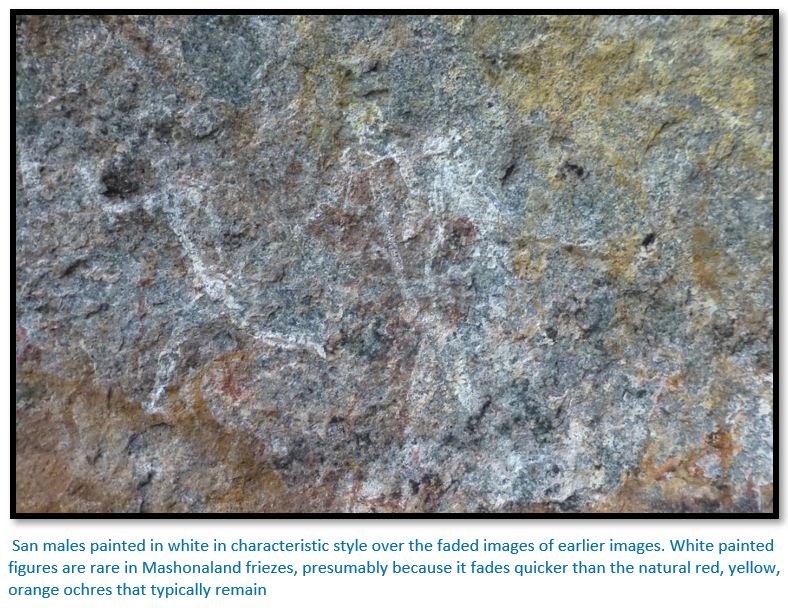 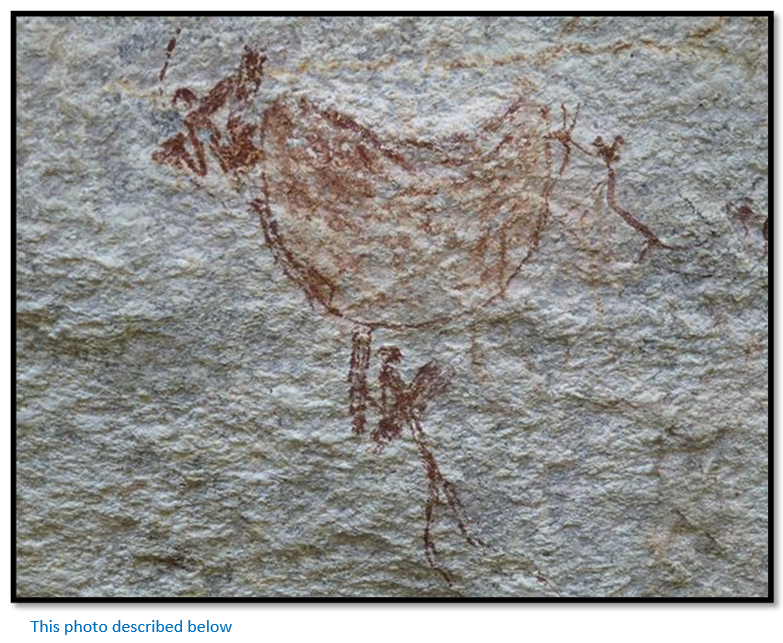 Above an unusual scene of hunters with attenuated bodies carrying large shoulder bags, or bundles of sticks, escorting a red painted crescent-shaped symbol with white paint at the open end. This appears to connect with a white horizontal line. One figure on the left kneels facing the open end. On the right are five bichrome figures edged in white led by a therianthrope with large ears, the others are crouched, crawling and recumbent.  This scene probably is an attempt to portray the supernatural inhabitants of the spirit world, the gauwasi, seen by the artist whilst in trance. 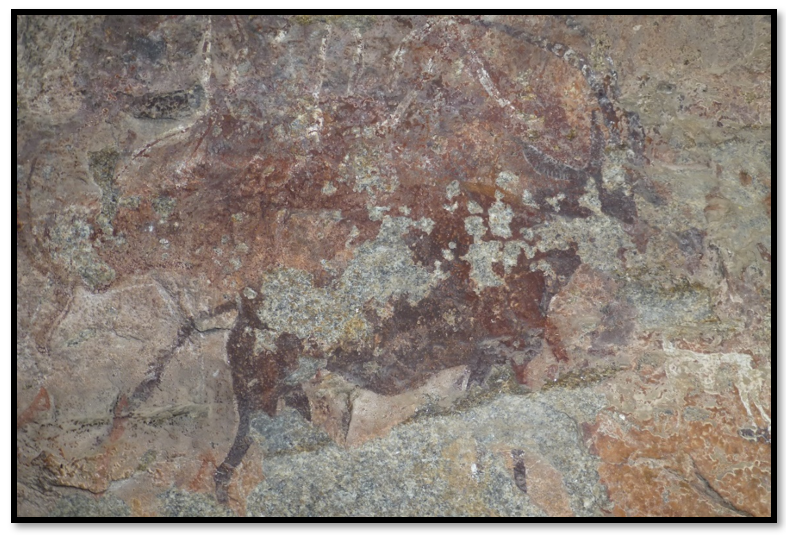 The sable image shows bare patches indicating that the dark paint shade may have been pecked at a later date – as in the case of the sables in the Southern cave. Note the human crouched on all fours on the right-hand side…probably part of a trance scene. 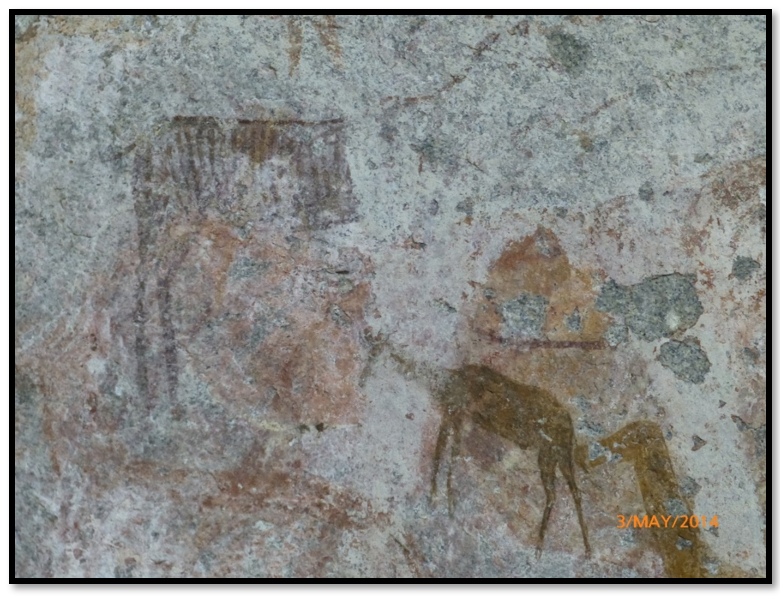 The large well-proportioned image of an elephant drawn in a white clay-like paint dominates the frieze - shown here to have been superimposed over and partially obscured earlier images of a striped zebra and kudu doe. 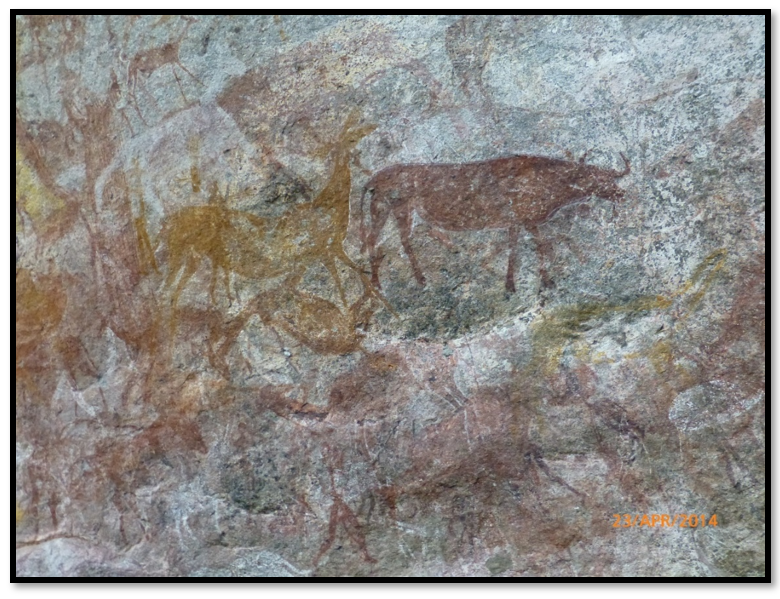 An image from the Southern Cave that reinforces my statement made in the Northern cave that the San may have seen each painting as a living, continuing and potent force. If a frieze was seen as never finished, or completed, then it would be legitimate for later San artists to add to earlier paintings…to superimpose and juxtapose new work with earlier work. Both the buffalo and kudu in yellow ochre have been outlined in white paint – a sign of their individual spiritual energy and potency. 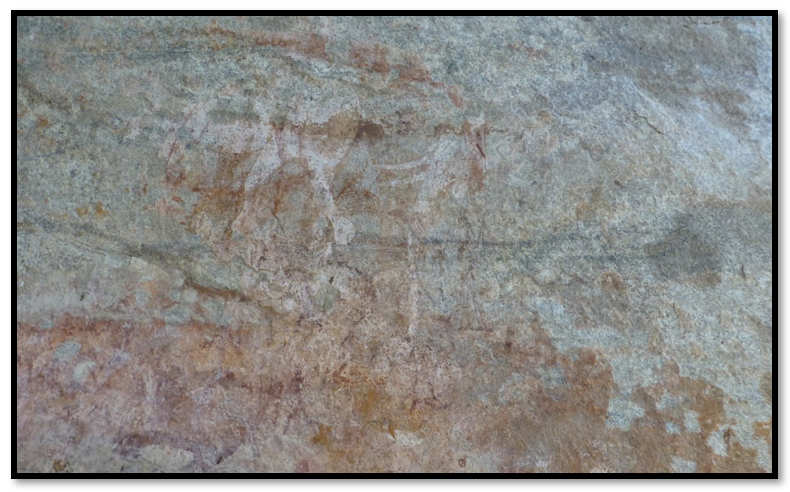