The Northern Cave at Chikupo has a short steep and slippery slope on the western end to negotiate, but once accomplished there are wonderful views over the adjoining kopjes and communal lands to the north and west. 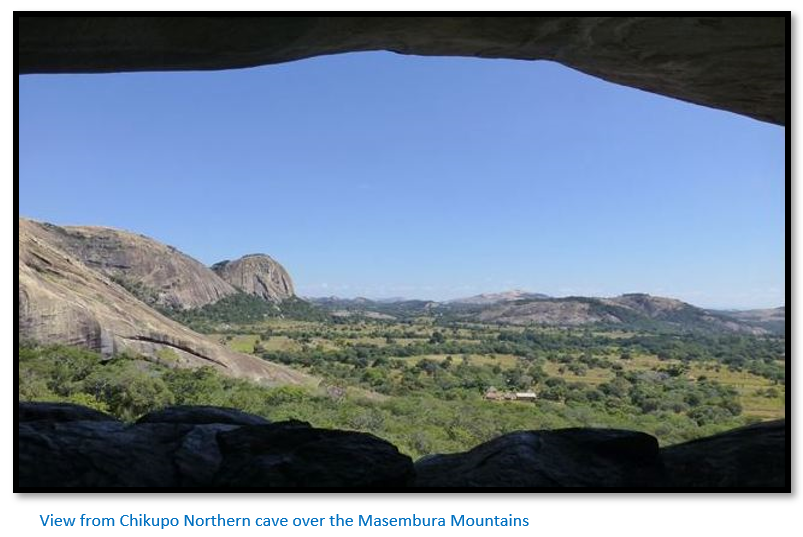 Starting from the northern end are many well-drawn outlines of elephants, including babies, in four rows; the lower ones largely obscured by later paintings. One, top right and shown in the photo below, has an ochre infill; the remainder are in outline with their bellies and backs highlighted in red ochre. They show great observation and realism and probably will be the highlight of this rock art site for many visitors. 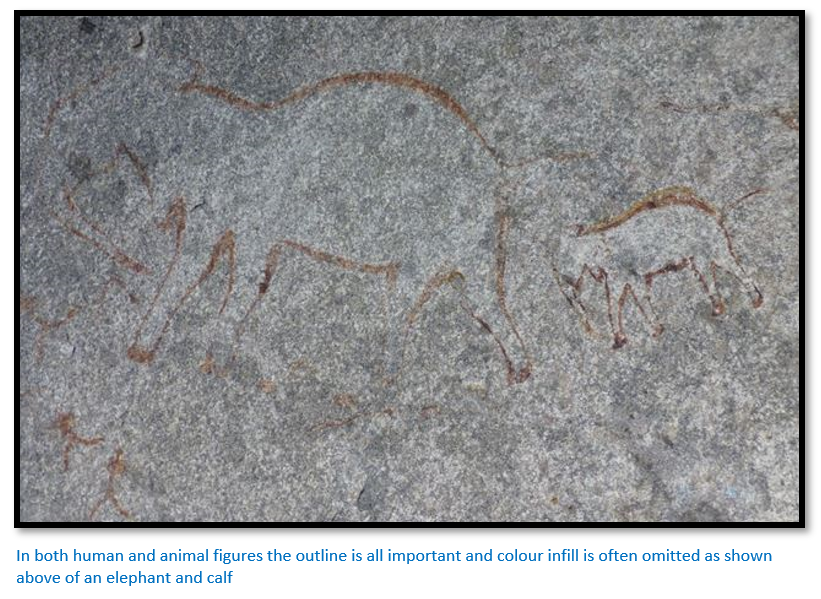 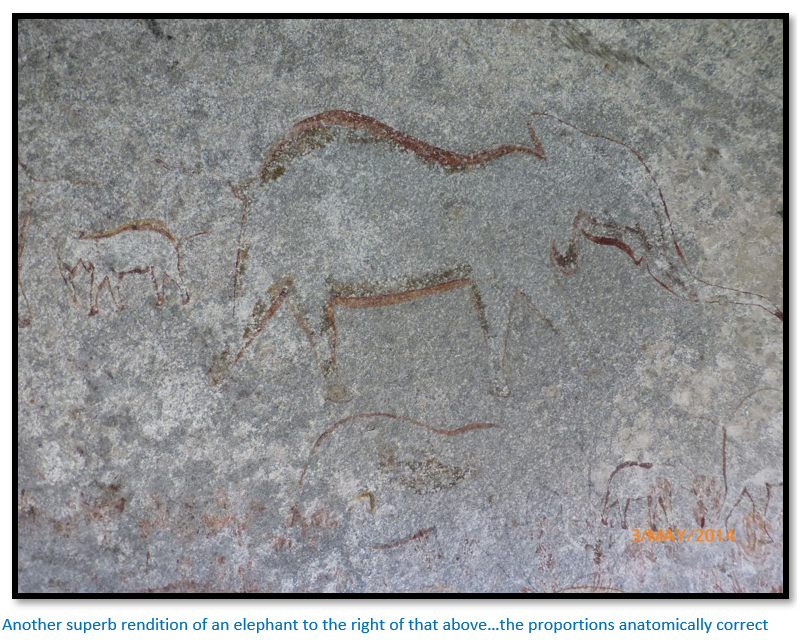 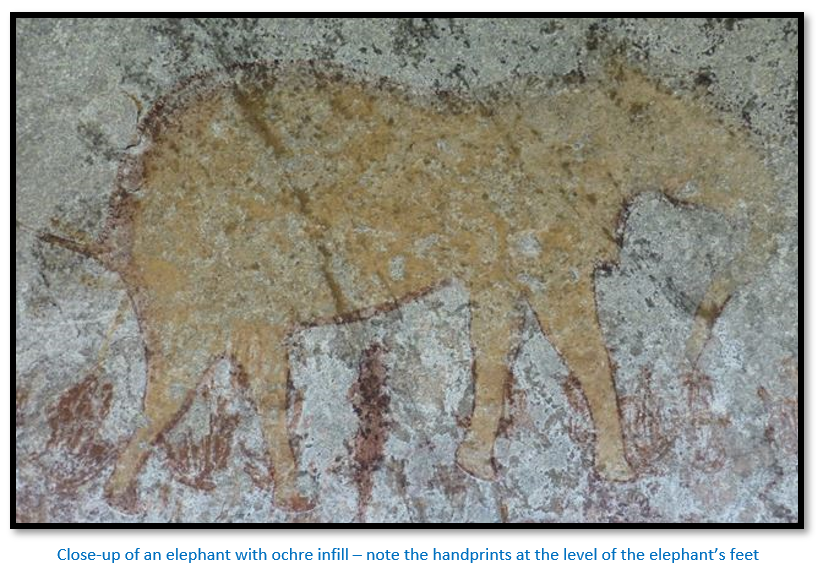 In a scene unique in Zimbabwe’s rock art, a line of handprints are at the feet of the elephants. They probably once extended right across the cave as examples can be discerned all along the wall. Garlake estimates there were probably over 150 originally, of which at least 50 remain. Paint was applied to the palm and fingers and the hand pressed against the rock, some are visible on the photo above. Interestingly the yellow ochre on the elephant above was clearly added later than the outline, as it overlies the handprints.

Under the elephants are many files of hunters, some outlined and decorated in white. They have been defaced by several crude, post-Stone Age imitations of hunters over one metre high which have been finger painted in a white clay-like substance that does seem to be relatively permanent. 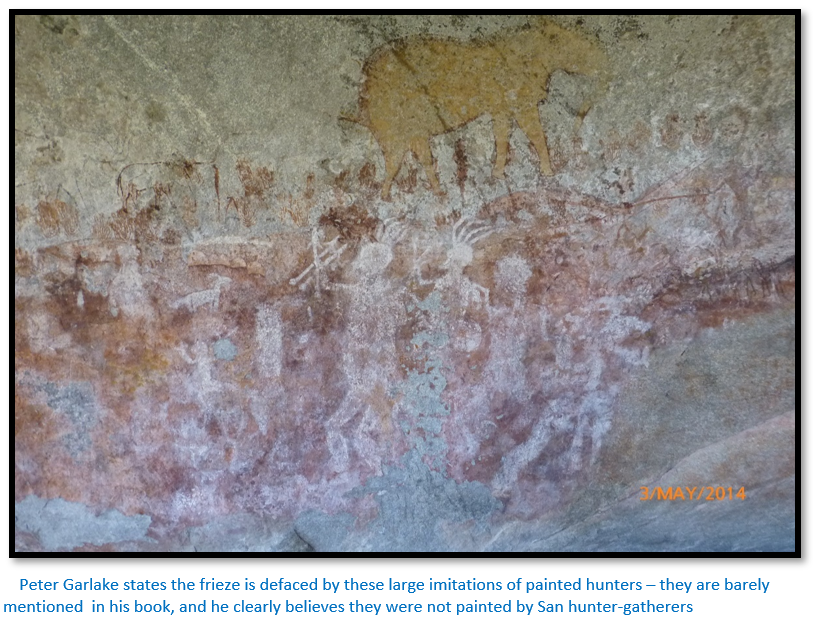 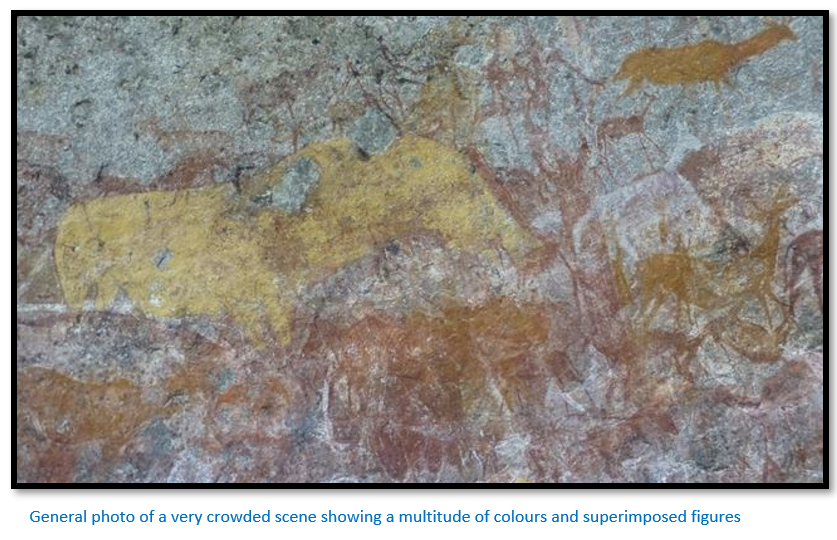 Garlake describes the large area of yellow ochre as representing an unidentifiable animal, but I believe the left-hand side to be an elephant facing outward with the object on the right-hand side representing a supine antelope, its legs at the top folded inwards and pointing left along the body.

Many paintings are seen as superimposed, that is they have been painted over and superimposed on other paintings, often obliterating and destroying the beauty of earlier images. This practice bewildered many earlier researchers, as it is almost unknown to destroy earlier works. However, the San may have seen each painting as a living, continuing and potent force. If a frieze was seen as never finished, or completed, then it would be legitimate for later artists to add to earlier paintings, to superimpose and juxtapose new work with earlier work.

Numerical analysis in South Africa indicate that superimpositioning and juxta positioning in painting followed definite rules. The process of adding to and altering paintings would add to their power, or potency and results in dense masses of images that spread from the centre of the frieze to the periphery.

In addition to the mass of painted antelope images are well-painted baboon, some kudu outlined in white paint and two felines, probably cheetahs. 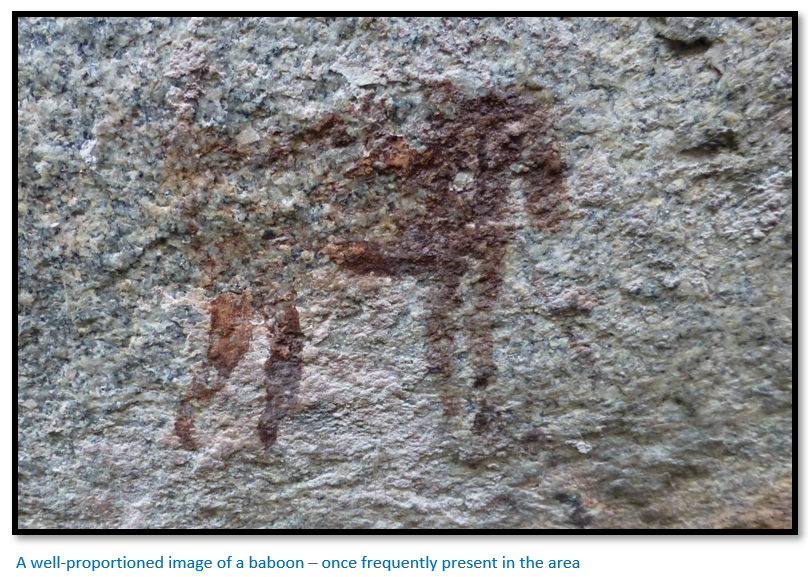 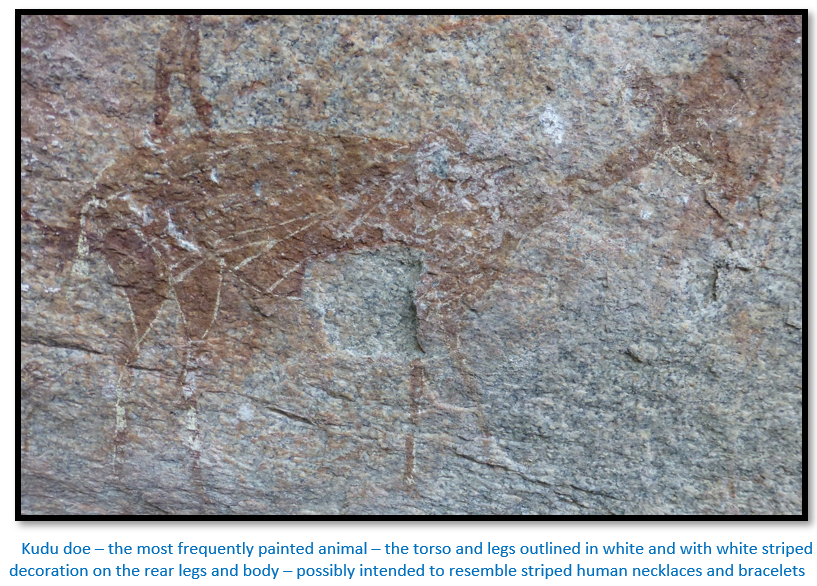 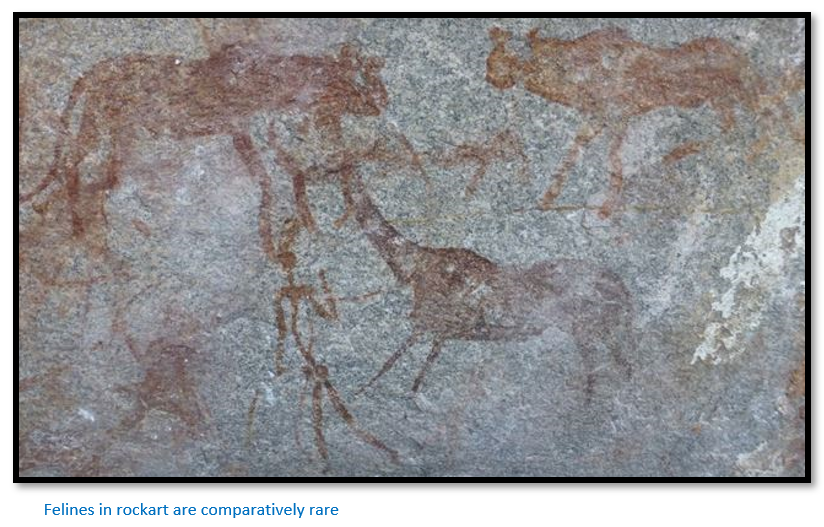 In the centre of the cave around the large area of yellow clay described above, are the remains of many kudu and other images. On its right is the clearest and largest of several ovals, or what Leo Frobenius called formlings, composed of eight white elements with white semi-circular tops and bottoms and the usual red rectangle in the centre. A figure just below them has lines coming from his arms and hand. Below him, a kudu has been over painted with a pattern of white lines, another lies supine. 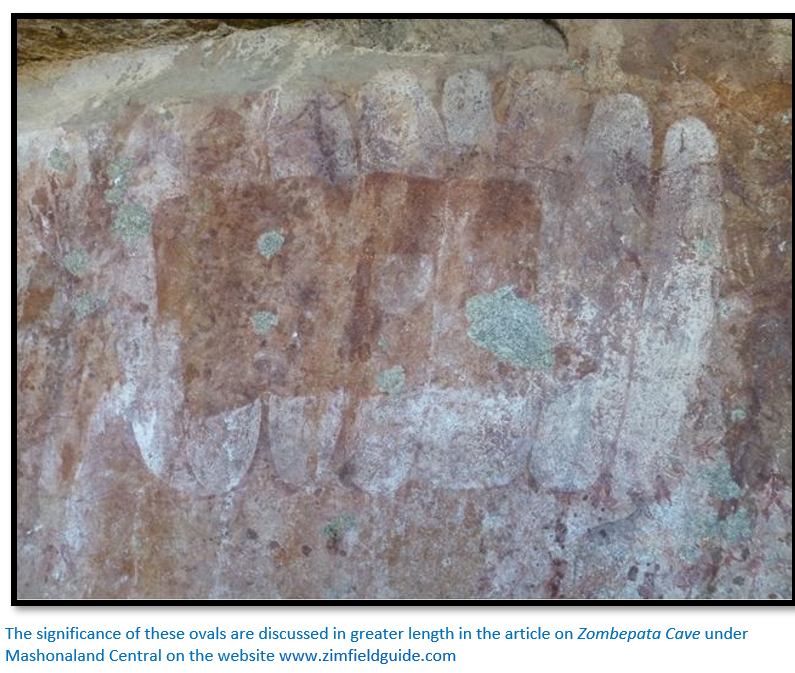 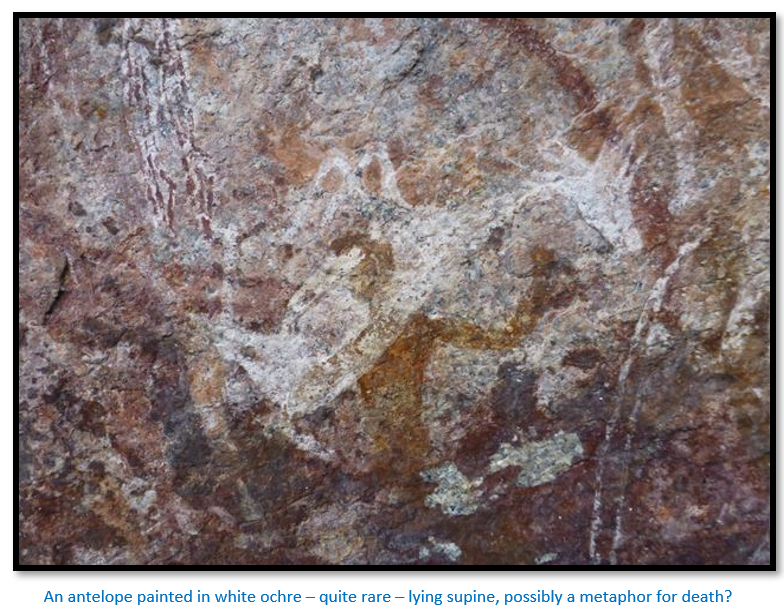 To the right of the supine antelope, not easily seen, is a white snake with an animal head. Below and right of its head are three hunters with hair on end and a figure also with lines coming from the head, one ending in an animal head. 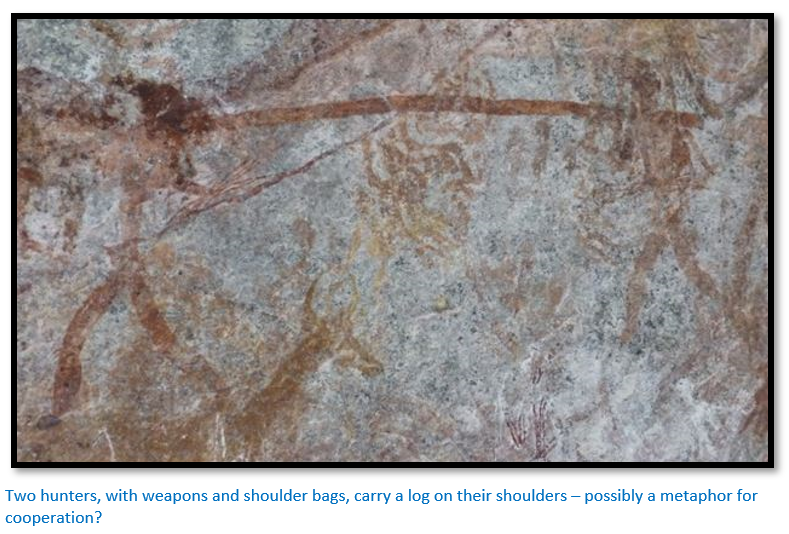 Moving west on the cave roof, is a trance scene. Seventeen crouched dancers including children, some wearing capes and a feather in their heads, some with tail feathers or lines from their rumps, are surrounded by participants and typical camp equipment of shoulder bags and weapons.  Superimposed in the centre, in a different style and paint colour, a trancer lies prone. Five larger hunters with weapons, some in headdresses, have been superimposed on the trance scene in a distinctive yellow ochre. 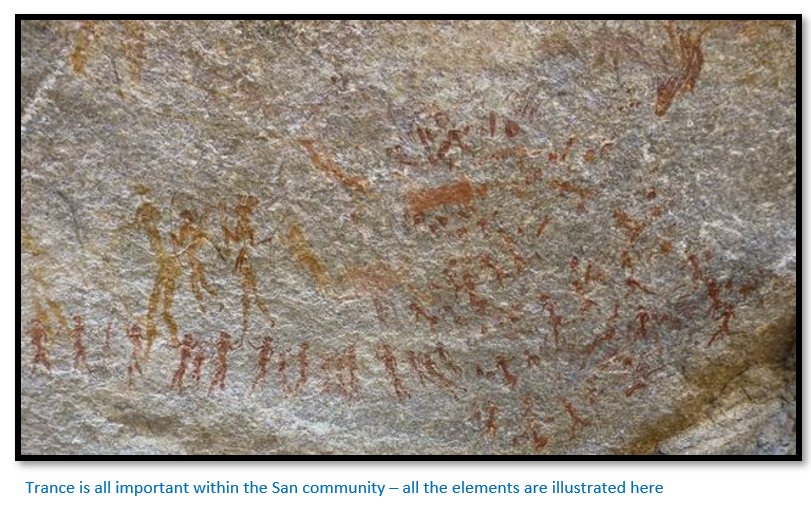 Some San dances are simply for pleasure and socialising. However, the most significant dances are concerned with curing, not so much of sick individuals, although this does happen, as of removing potential evil or sickness from every member of the group. All dances take place in the centre of the group. The men lean forward with knees bent and move with small, controlled hops and skips in a circle. Their only musical instruments are rattles made of seed pods tied around their ankles. The women squat, singing and clapping rhythmically, or may join in the circle of dancing men and participate fully in the dance.

In a medicine dance, some of the participants, although not more than two or three at a time, pass into trance, a state called !kia, achieved mainly through hyperventilation. The trance state induces shivering, trembling, sweating, rigidity and sometimes nose bleeding. It produces visions and hallucinations for the trancer, and they enter the spirit world. In trance, they can cure patients, by removing evil influences from the patient to the curer. This is done by fluttering the trancers hands against the patient’s chest and back and finally throwing the evil out and back to the gods with a violent gesture of both arms. The spirits of those in deep trance are believed to leave the body and travel outside it.  Read the article on Thetford Game Reserve Rock Art under Mashonaland Central on the website www.zimfieldguide.com for a more detailed explanation of trancing with illustrations. 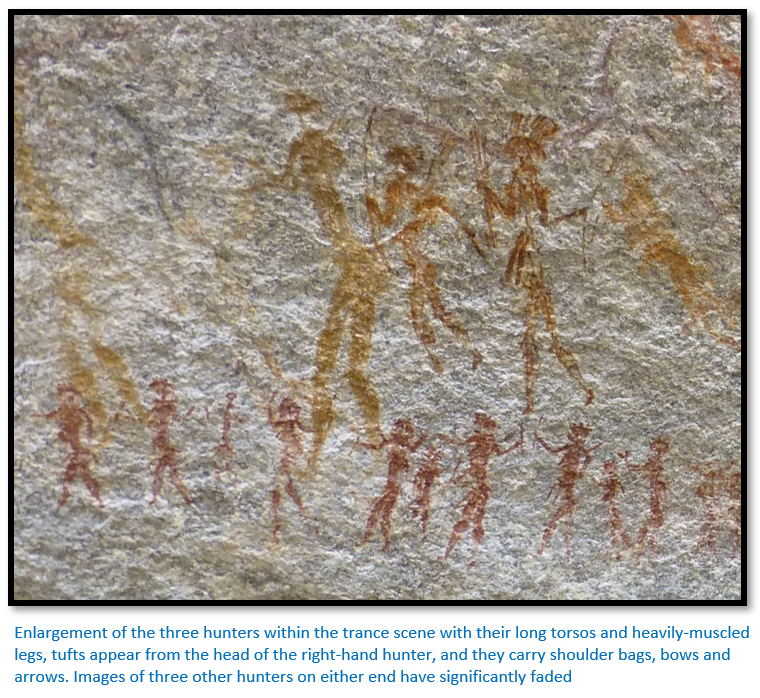