This little known rock art shelter may not be as spectacular as Chikupu Cave, but combined with a visit to the nearby Chisvingo Ruins, it makes for an interesting day excursion from Harare. For planning a trip, the suggested order would be to follow the tar through the Chinamora Communal lands to Chavadzimu rock art shelter first. The nearby Chavadzimu store offers refreshments and a parking area. Then follow the tar through Manhenga village before turning left onto the untarred Masembura Road. Within 5 kilometres reach Maravanyika Primary School and the turnoff on the right for Chisvingo Ruins. After visiting Chisvingo ruins, return to the tar road. Turn left for Bindura and the A11 to reach Harare via Mazowe, or turn right to return via the outward route for Borrowdale.

Leave Harare on the Borrowdale Road, distances are from Borrowdale police station. 13.4 KM the road crosses a grid and enters the Chinamora Communal Lands. 16.3KM pass the signpost to Domboshawa National Monument. 26.6 KM pass the signpost to Ngomakurira National monument. 30.0 KM pass the turnoff to Chikupu rock art shelter, 28.2 KM pass Makumbe Mission turnoff, 29.5 KM turn left at the intersection staying on the tar road. 35.2 KM keep right at the intersection, 40.9 KM turn left at the intersection keeping to the tar. 48.2 KM continue to the Chavadzimu stores and turnoff for Chavadzimu rock art shelter. Park at the store and following the track which skirts the base of the gomo for 450 metres to the site which is only 30 metres from the track through thick undergrowth.

The shelter is easily accessible being about 450 metres from the tarred road down a track which leads north west from the Chavadzimu stores.

About eighty metres east of the main cave, in dense thicket, are a group of two hippo cows and calves. Beside them, drawn extremely naturalistically, are three rhino cows with calves.

Most of the paintings are fairly high and have survived because they are above the zone where water has penetrated the granite and leached out minerals. These surviving paintings are in quite good condition, but those below have been entirely obliterated.

To the left of the main frieze in a small hollow are the faded remains of some elephant, at least one hippo, an ovoid shape representing n/m, the latent potency within humans which is activated by trance, and probably associated with it, a crouching figure with a swollen stomach.

The left of the main frieze has three large elephant with an assortment of trees, abstract designs and human figures which appear to be in trance as they have lines appearing from them.

Above the third elephant on the right are the remains of a large faded ostrich and below are five small dark porcupines, which are rarely drawn, and two bushpigs. 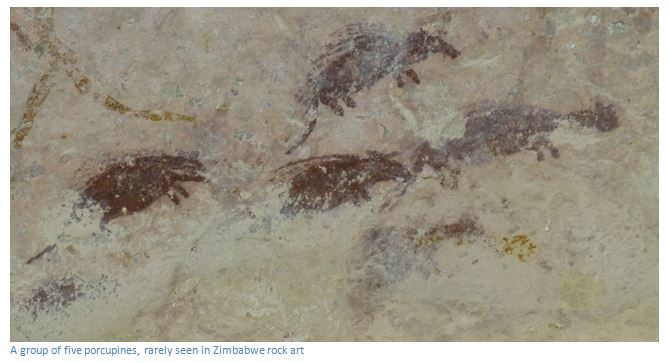 The body of a large snake painted in cream and outlined in red and speckled with many red dots stretches from the centre of the cave to the right side. It has neither head, nor tail and on its body are superimposed eleven kudu bulls. They are drawn in outline only with elongated bodies and short legs; their bodies left the same cream colour as the snake, and most have white lines added on their torso. Five elephants mostly painted in solid red ochre, but some in outline only appear above them. 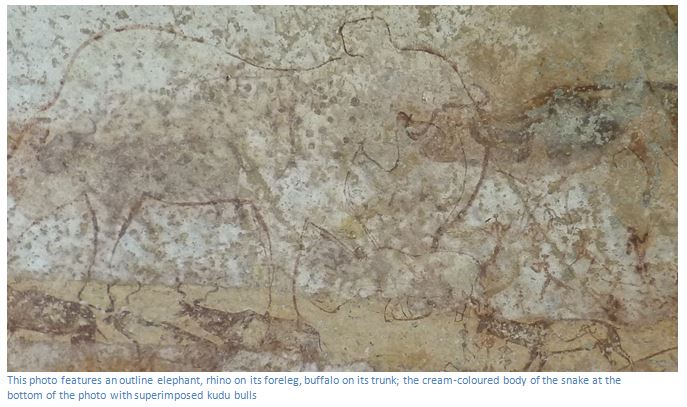 The centre of the frieze features long lines of hunters, many of them superimposed on the body of the snake, who converge on a mass of figures including a pair of large ochre figures, buffalo and several sable antelope. 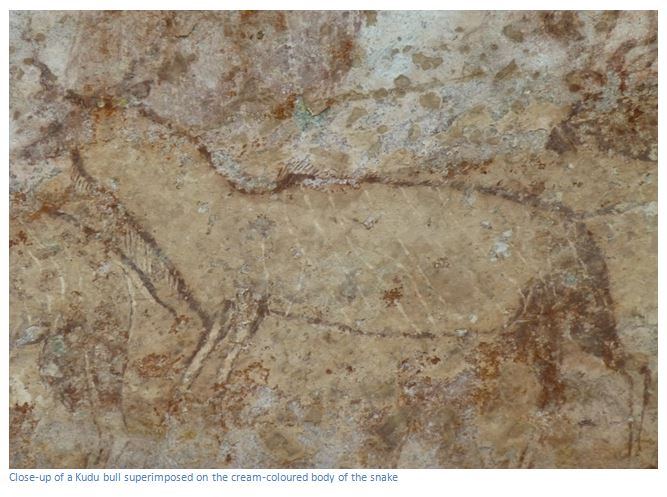 When to visit:
All year around
Fee:
None, but a small donation if you are guided to the site
Category:
Rock Art
Province:
Mashonaland Central