Chimanimani Village (formerly Melsetter) is the gateway to the Chimanimani Mountains and the nearest place for provisions of any kind. The Memorial served as a reminder of the hardships endured by those early arrivals into this part of the country that opened up the area for commercial farming and timber businesses.

The original village of Chimanimani was founded by Thomas Moodie in 1892, but in 1895 it moved to its current site and was officially called Melsetter after the Moodie family, who pioneered the district, after their family home in the misty Orkneys of Scotland. The name was changed in 1982, after Zimbabwean independence to Mandididzura before being renamed Chimanimani. 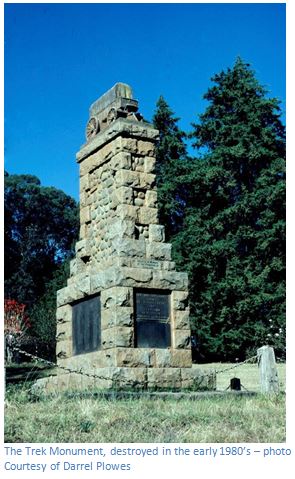 There have been three 'Melsetters.'  Steynstroom was renamed North Melsetter in 1911, but this village closed down in 1930. Central Melsetter is the present Melsetter and South Melsetter became the site of the present Chipinge (formerly Chipinga)

The village is the site of one of the earliest European settlements in Zimbabwe. Rhodes believed it was essential to his plans for occupying Manicaland and he obtained the services of George Benjamin Dunbar Moodie to recruit farmers from the Orange Free State, with the offer of a 3 000 morgen farm in Gazaland to every man and boy who could trek to the Eastern districts.

Dunbar Moodie contacted his uncle, Thomas Moodie, a farmer in the Bethlehem district of the Free State, Thomas Moodie organised a party of 29 families consisting of 37 men and 31 women, with 17 wagons and 350 horses and cattle. They were mostly Afrikaans speaking farmers and the party set off in May 1892.

After many misadventures, including the outbreak of foot and mouth disease among the cattle at Macloutsie, attacks by lions and shortage of water, they eventually reached Masvingo (formerly Fort Victoria) where disagreement broke out and most of the trekkers went northwards and settled at Chivhu (formerly Enkeldoorn) and Harare. With only seven wagons and 14 men, four women and three small children, Moodie set off east to what was then called Gazaland. The thick bush and hilly terrain often hampered progress and sometimes the wagons had to outspan for as long as four days while the men cut, dug and dynamited a path through the rocks and thick trees. Then they reached the Sabi, a wide sandy bedded river, rumoured to be treacherous with quicksands. Thomas Moodie went ahead on his horse from island to island in the shallow river to mark out a safe and firm path for the wagons. Hampered by horse sickness and malaria soon after crossing the Sabi they came across a great mountain barrier, ‘Threespanberg’, (today on the A10 south of the Tanganda River going toward Thomas Moodie’s Memorial) which they could only climb over four days by chaining three teams of oxen to each wagon.

At last, on January 3, 1893, nine months after leaving Bethlehem, they reached the green rolling hills of the present Chipinge district. They halted by three clear waterfalls, the spot where Thomas Moodie claimed his own farm, to which he gave the name ‘Waterfall’.

Thomas Moodie only survived long enough to see the site of Melsetter pegged out, he died of blackwater fever within a year of his arrival and his memorial and grave was erected on the farm he claimed. Many of the settlers died and all suffered severe hardships and deprivation. Red water fever and later the rinderpest claimed most of their stock and in 1895 Mrs. Thomas Moodie left the country, ruined in health and having lost all she had.

Dunbar Moodie's family fared no better. For making a road to Mutare the BSA Company granted him nine farms, but he was later arrested for gun running arms into Mozambique and then became ill with malaria and died in 1897. He wrote a will, but it was not witnessed and was declared invalid and all the farms, except the one Mrs Moodie lived on, were confiscated and repossessed by the B.S.A. Company.

The unusual wagon-topped memorial standing on the village green at Melsetter bears the names of the Melsetter pioneers, with a local service in their memory, the last occasion being on 3 January 1973, and the 80th anniversary of the Moodie Trek. Today the journey from Mutare to Chimanimani is covered in a few hours, but sixty years ago the record time to Mutare from Chimanimani was three days on a fast horse, or three weeks by covered wagon!

In 1906 Mary Ward came to teach at the school which she describes as: “The girls sleep in a big dormitory and my room is partitioned off from this. I boast a calico ceiling, but they have only rafters and zinc. The boys sleep in two small rented brick houses. The dining room and sitting room are in yet another building, and we can just fit into the dining room with our 20 boarders.”

Describing her journey from Mutare to Chimanimani Mary Ward wrote “At 8 a.m. I left the hotel at Umtali and, escorted by two natives bearing my small baggage and supplies on a small handcart, I walked about a mile to the outspan. The driver introduced me to my fellow traveller on the wagon, an unshaven and rather objectionable man.

Rather more than one third of the wagon was covered with a tent, and my mattress was placed under this on top of bags of flour, etc., which made my bed full of ups and downs. It was impossible to sleep while trekking, but we always outspanned for an hour or two before dawn which made a most welcome rest…
I cooked my breakfast of bacon and tomatoes. The other traveller made scones of flour and baking-powder which he cooked in a frying pan. He asked me to try one, and though I knew his hands would have been improved with a wash, 1 accepted and enjoyed it.

The scene was peaceful and beautiful and the scenery grew more picturesque, but the road, winding between high rocky kopjes, grew worse and worse. I walked when I could, but one evening I found out what a real rough shaking is. First it seemed I was going head first through the tent over the load into the river: then as if I was about to slide into it feet foremost, and had great difficulty in keeping my feet from going through the mosquito-netting which closed the opening of my tent. There followed such a shaking up that it made me feel as if every organ and bone in my body was playing at general post, together with a painful sensation as if a giant had taken me up to wring me out with a particularly tight twist round my waist.

We then crossed the Nyanyadzi River seventeen times! It winds down a narrow valley, and we crossed it three times in a quarter of an hour. Travelling by wagon is no joke: in congenial company a trek of two or three days might be delightful, but I have had enough. My trek was a good one, that is, we made it in just eight days. Sometimes it takes ten or twelve and if there are heavy rains and floods, as much as three weeks.

Finally Mary Ward concludes: Melsetter town ship consists of about 15 buildings including the Court House and a few huts. It is found in the newest atlases, and we consider it a most superior place: surrounded by hills and facing the Chimanimani Mountains the situation is very picturesque. Not counting the boarders, there are about 26 white people, with most of the men in Government service. It is a sociable little community and I am very happy here.