National Monument No.:
27
Why Visit?:
How to get here:

From Birchenough Bridge take the A9 heading toward Mutare, 2.82 KM turn right onto the A16, 24.98 KM turn left onto the A10, 49.0 KM the A10 meets the Road to Chipinge and Espungabera (Mozambique border) 49.1 KM the Memorial is on the right-hand side of the A10. Visitors can park the car immediately adjacent to the Memorial, but the grass may be overgrown.

In 1891 Dunbar Moodie travelled through Chief Gungunhana's country in Gazaland, on the borders of Mozambique (then Portuguese East Africa) and reported it the finest agricultural land he had seen. Cecil Rhodes realised that it was essential that there should be a buffer state between Manicaland and the Portuguese the Chartered Company secured a concession with Chief Gungunhana to allow settlement of European farmers in Gazaland. This spurred the Portuguese on with the demarcation of the border and it was agreed that all the land around Melsetter known as Gazaland be ceded to the British.

Dunbar Moodie's idea was to settle a hundred families in the area. Rhodes approved and offered 3,000 morgen of land to every man and boy who would trek to these eastern districts of Mashonaland. When Thomas Moodie, Dunbar’s uncle, began to organize his trek he received more than 500 applications to join; but many wanted better terms which the Chartered Company refused. Thomas Moodie was not deterred, and the party that set out from the Orange Free State on the 5th May 1892 consisted of 37 men, 31 women and children, with 17 wagons and 350 horses and cattle.

The trek was an arduous one. The Moodie party was held up at Macloutsie by foot and mouth disease and many cattle became too weak to stand up and were devoured alive by the hyenas that prowled around the camp. The trek went on eventually to Fort Victoria, where Dunbar Moodie joined the party having been to Salisbury (now Harare) via boat to Beira. Some members of the trek, under John Nesbitt, decided to go to Harare (then Salisbury) rather than continue long and difficult journey still ahead of them, but Thomas Moodie was determined to reach the mountainous country of Gazaland.

In November 1892 the party set out from Fort Victoria into Manicaland, a largely unexplored country and suffered many hardships.  Arriving at the summit of a hill they looked down at its steeply descending sides. It seemed impossible for take their wagons further and in desperation they called it "Amen Heights"! Getting down the Moodie Pass (on the Masvingo to Birchenough Bridge Road (A9) as it goes through the Mukoriro Hills) took four days as they dynamited large granite boulders and cut trees. To prevent the wagons sliding and capsizing, the wheels were secured to prevent them revolving and as one wagon at a time was let down, a team of strong men held on with ropes attached to its rear to prevent it running away.

Moodie was told that he could never ford the Sabi River (now the Save River) and when the trekkers arrived at the Sabi, near the present-day Birchenough Bridge they looked upon the kilometre wide river bed with amazement. Dunbar Moodie rode his horse into the river bed, looking for firm and solid ground in the sand, leaving markers to indicate a safe route for the wagons. However, by next morning the river had risen, his markers were washed away and so he was forced to repeat the task.

Tom Moodie’s wagon was the first to cross with his tense and worried wife as passenger, but their progress was steady and eventually they reached the opposite bank. The first four wagons managed successfully but as the vehicles disturbed the sand under the thorn, it was necessary to add extra teams of oxen to pull them through, until after much shouting and cracking of whips the last wagon was safely across.

They came to a mountain so steep that it took three spans of oxen to drag each wagon to the summit, with the men pushing in the rear, whilst the women walked, carrying small children; but they conquered Three Span Berg on Christmas Day, 1892 and journeyed on.

The Tanganda Valley they crossed at night because of the threat of tsetse fly infecting their animals.

There was much excitement when they in-spanned their oxen for the last time.  On January 3, 1893, Waterfall Farm was reached. Here the trek ended and the trekkers settled down to develop the land they called Melsetter, after Melster in the Orkneys, where the Moodie family had lived for generations.

Although the country was beautiful, it was far removed from all centres of settlement and their struggle for existence was amongst the most arduous of all the early settlers. Thomas Moodie was taken ill in his fifty-third year and died 0n the 30th April 1894. His grave stands beside the road on Waterfall Farm, Chipinga (now called Chimanimani) 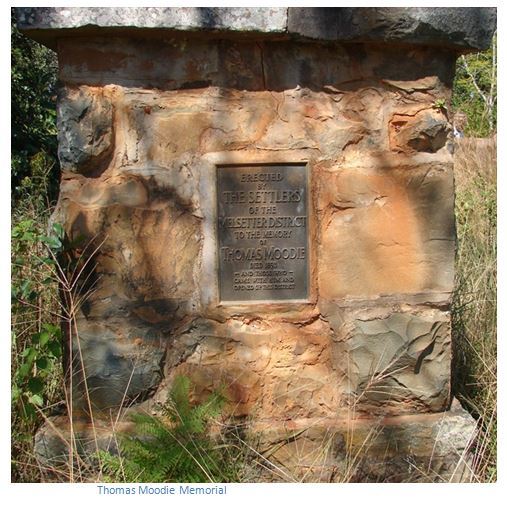