The Save River (formerly Sabi)

The River’s proper name is Mutsave or Save (pronounce Sah-veh) and it has played a major role in the history of the area. The Savé Valley is noted for its relentless heat and the majesty of its baobab trees. 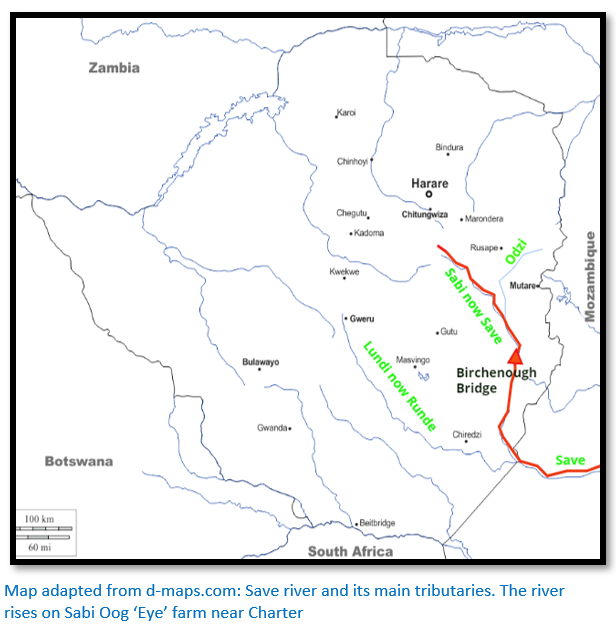 According to some traditions, Nyakuyimba stole the rain charm of the Rozvi King, Murimo and fled to the Chimanimani with his two brothers, Tshikanda and Tshimotwo with a Rozvi army in hot pursuit. In desperation the three brothers split up with Nyakuyimba fled to the southern end of the mountains known as Dondo (forests) and gave the rain charm to his wife telling her to hide in the Chirinda Forest whilst he faced his pursuers. The Rozvi army defeated Nyakuyimba and cut off his head to take back to their King. But on the way back the head began to swell the further they carried it before it burst from where the Save river has its source. When the waters of the river flowed past the mountains, Nyakuyimba’s wife knew her husband was dead and gave the Rozvi rain making charm to his son, who became Chief. Their title became Musikavanthu (creator of men) because it was said that because of their rain, food for men was grown.

Other traditions say that when people settled in the Save Valley there was no river and the land suffered from drought. The Chief’s sister could not bear the plight of her people and died and from her grave came Mutsave or perpetual dampness from where a spring arose that became the source of the river.

The river’s former name, Sabi, always caused confusion with the river of the same name in Mpumalanga (formerly Eastern Transvaal) It is Zimbabwe’s largest internal river and rises south west of Marondera. Its gradient is particularly steep (600 metres in 400 kilometres) which has led to soil erosion in the upper reaches and soil deposition in the middle Save valley, south of Birchenough Bridge, where there are several major irrigation schemes. 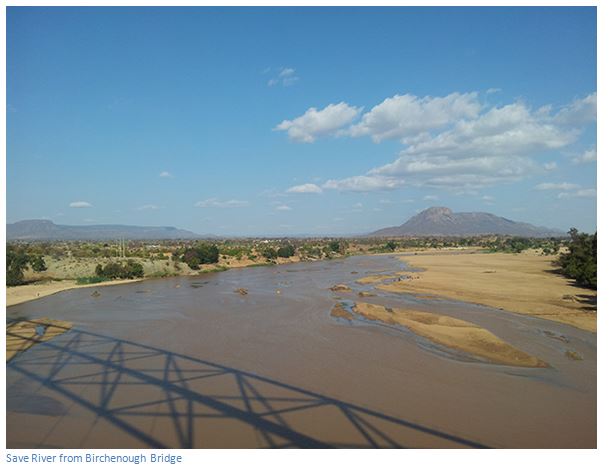 The Save River was the route for the transport of gold from the interior centred on Great Zimbabwe to the Indian Ocean port town of Sofala, in Mozambique. The river has its source some 80 km south of Harare, then flows south and then east, to its confluence with the Odzi River, before turning south, drops over the Chivirira Falls (“Place of Boiling”) and flowing down the middle Save Valley. At the Mozambique border, it is joined by the Runde River (formerly the Lundi River) then crossing Mozambique to flow into the Indian Ocean.

As Sofala, lies only about 100 kms north of where the Save River enters the sea, it developed into the most important gold-trading centre between the coast and the hinterland occupied by the civilisation of Great Zimbabwe in the 13th and 14th centuries AD. Sofala was founded about the year 700. Sometime in the 10th century, Sofala emerged as a small trading post erected by Somali merchants from Mogadishu (modern day Somalia’s capital) to trade cotton cloth for gold and ivory.. In the 1180s, Sultan Suleiman Hassan of Kilwa (in present-day Tanzania) seized control of Sofala and the Swahili strengthened its trading capacity by having, among other things, river-going dhows ply the Buzi and Save Rivers to ferry the gold extracted in the hinterlands to the coast.

Sofala's gold trade proved a windfall for the Sultans of Kilwa, although ivory, iron tools, tortoiseshell, cloth, salt, and handcrafts were also traded and allowed them to finance the expansion of their commercial empire all along the East African coast and Sofala itself became the most dominant coastal city south of Kilwa itself. Sofala benefited not only from the gold trade into modern day Zimbabwe along the Sabi River, but via a land route directly with Chipangura (present-day Manica) the capital of the Manica kingdom and the site of a gold fair and along the Limpopo River valley with Mapungubwe.

From 1200 as Mapungubwe’s power declines through drought and overgrazing, people move north to the Zimbabwe plateau and from around 1250 building began at Great Zimbabwe which eventually houses around 10,000 to 18,000 people. The ivory and gold trade continued with Sofala along the Sabi River valley with increasing imports of glass beads and for the elite, glassware and Chinese ceramics.

By the late 1400’s however the status of Great Zimbabwe has declined until permanent settlement is abandoned at the site.  Various explanations have been advanced for its decline including depleted resources for grazing and overpopulation leading to famine, or the exhaustion of surrounding gold deposits. By 1500 Great Zimbabwe has been abandoned and its people move gradually in two directions: south to establish the Torwa state and north to establish the Mutapa state.

The Mutapa state developed around the Mt Darwin area. This state has also been called in the past Munhumutapa, Monomotapa and Mwenemutapa. Culturally the Mutapa state is related to the Great Zimbabwe state, as evidenced by pottery finds and building styles. The economy is sustained the traditional system of cattle rearing with large numbers of cattle being kept by local rulers in the regions around the capital. They could use the cattle for their milk and for ploughing, but could not kill them. They showed their loyalty to the Mutapa by paying tribute in the form of agricultural products like millet and sorghum grains, cattle and skins, or providing labour for gold mining, or physical gold.

Gold remained the main export from the Mutapa state and was exchanged for cloth, beads and ceramics with the same Swahili and Muslim Arab coastal traders; but gold mining in the interior had gravitated north and the main focus of the trade route has now become the Zambezi River valley, rather than the Sabi River, with delivery was being directed to the better-situated emerging new coastal town of  Quelimane.

Into this changing economic condition enter the Portuguese explorers. In 1489, the Portuguese explorer and spy Pero da Covilha, travelling overland disguised as an Arab merchant and is the first European known to have visited Sofala. His secret report to Lisbon identified Sofala's role as a centre of the gold trade, although by this time, although the Portuguese do not realize it, the gold trade was quite diminished from its heyday. In 1501, Sofala’s location from the sea is determined by Captain Sancho de Tovar. In 1502,pedro Afonso de Aguiar (others reports say Vasco da Gama) led the first portuguese ships into Sofala harbour.

In 1505, the Portuguese were granted permission by sheikh Isuf to erect a factory and fortress near the city and Fort São Caetano of Sofala became the second Portuguese fort in East Africa (the first being at Kilwa) Stone was imported for the purpose from Europe, but between 1901 and 1925 the same stones were taken and used in the foundations of the nave and high altar of Beira’s cathedral. 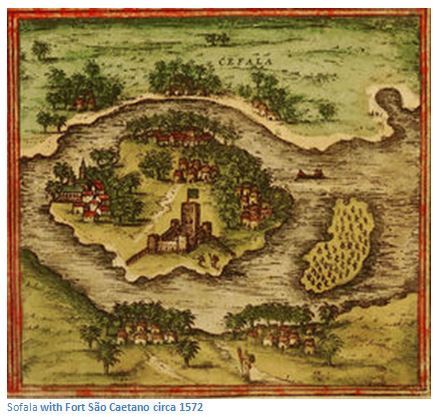 The Portuguese fort was not a success as much of the garrison was decimated by malaria and In 1507, the new Portuguese Captain of Sofala, vasco Gomes de Abreu, captured the island of mozambique to the north and much of the Sofala garrison transferred to the island, reducing Fort Sofala to a mere outpost. Sofala harbour once reputed to be capable of holding a hundred vessels, became silted and the site a mere outpost of the Portuguese Empire.

There have long been tales of ancient dhow mooring rings just outside Zimbabwe at Mavue in Mocambique indicating the highest navigable point on the Sabi River for the gold merchants to moor their boats, but there are no reports of visitors stating they do physically exist.