Take the A3 from Mutare towards Harare crossing Christmas Pass. Distances are from the roundabout where the A3 and the Aerodrome Road intersect. 10 KM turn right onto the A15 towards Juliasdale, 40 KM pass through Watsomba, 84 KM turn right at the intersection with the A14, 85 KM reach Juliasdale, then as above.

The Park was once the private estate of the nineteenth century businessman and politician Cecil Rhodes who first visited Nyanga in 1896 and quickly bought up a number of farms, writing: "Dear McDonald, Inyanga is much finer than you described. I find a good many farms are becoming occupied. Before it is all gone, buy me up quickly up to 100 000 acres [400 KM²], and be sure to take in the Pungwe Falls. I would like to try sheep and apple growing. Do not say you are buying for me. Yrs. C.J. Rhodes.”  It was later found that the Pungwe Gorge lay just outside the Estate, so in 1938, a further 550 acres surrounding the Pungwe Falls was purchased.

There are a number of possible sources for the name Nyanga; R. E. Reid, one-time District Commissioner at Nyanga believed it was named after a hill called Nyanga which has two little peaks on its summit which, from a certain angle, look like the horns of a small buck - "runyanga" — a horn; plural — "nyanga."

Another version is that a famous herbalist, Sanyanga, lived at the foot of Mt. Nyanga.  He was a very famous doctor and people came from far and wide to consult him.  Chief Mutasa became ill and was cured by Sanyanga , who made him court physician with the rank of Headman and gave him a "dunhu" (district) in the area of the farm now called Sanyanga's Garden. When the first Native Commissioner was sent to Inyanga he established his camp and office in the vicinity of Headman Sanyanga's Kraal, so it became referred to as "Sanyanga's", and finally abbreviated to "Inyanga". The Native Commissioner's office was moved several times and the name followed it and was eventually applied to the whole district.

Commercial farming began in 1892 when Douglas Adam guided a party of men who subsequently pegged a number of farms. J.B. Moodie and W. Leckie Ewing of Ruparara grew the first apples in the area now known for the quality of its fruit. Sheep were also tried and Mrs Harmer, a member of the Moodie family, recorded that some types of sheep imported at the time were unsuited to the indigenous grasses and to the climate.

The Nyanga homestead of one of the Mutare residents, G. D. Fotheringhame, the owner of Pungwe Source and Fruitfield, was mentioned in the press in 1895 as a "commodious" residence. Rhodes bought both farms and it is Fotheringhame's homestead on Fruitfield around which the Rhodes Nyanga Hotel was ultimately built. Rhodes employed, a stonemason by the name of Dickie Marks from Mutare to do further building on the site and judging by early photographs of the homestead and its surrounds, the substantial stable block, now occupied by the National Trust, probably featured among the additions erected by Marks. So unexpectedly imposing was it that one visitor describes it as the best building in the country. 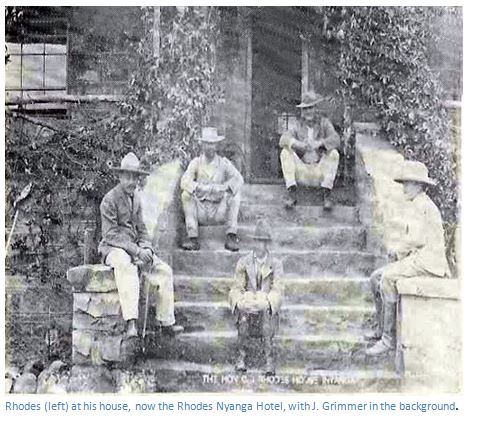 The old transcontinental telegraph line, spanning the country between Salisbury and Mount Darwin, crossed some unhealthy territory where “telegraphists had died at their posts; natives cut the wires; and elephants destroyed the poles.”  A new re-aligned telegraph line was routed from Mutare via Nyanga to the Zambezi at Tete, and then on to Malawi, with the ultimate object of connecting up with Uganda and Egypt. The project was managed by Jameson in 1897 and a store for the project was set up on the site of the present Anglers Rest Hotel. Major P.H. van Niekerk played a part in the installation of the telegraph offices at Nyanga and at Tete, thereafter proceeding to Blantyre.  By April 1898, communication with Blantyre was established.

Rhodes visited Nyanga again in 1896 and stayed some time as on the journey by mule waggon and horseback he caught malaria after having influenza and with his heart complaint, became quite ill.  Once recovered, he rode on horseback over much of his estate because the cool air and exercise improved his health. McDonald records that in relation to his farming experiments and development schemes no trouble was too great and no detail too trivial for Rhodes’ attention and he would sit and chat with the local farmers for hours on end.  His final visit was in 1900 after the frustrations of the siege of Kimberley.

His early managers were J. Grimmer and J. Norris. An unhappy report by Norris to Rhodes in May, 1899, refers to deaths among the livestock, failure of the wheat and oats crops due to bad seed; barley and vegetables swamped by heavy rains; potatoes diseased; fig and pear trees disappointing. Six months before, the locusts had "eaten everything off". It was during Norris' period as manager that J. C. Johnson, his brother-in-law, is reputed to have brought up from the Cape, at Rhodes' instigation, the acorns from which were planted the oak trees that line the road to the Rhodes Nyanga Hotel. 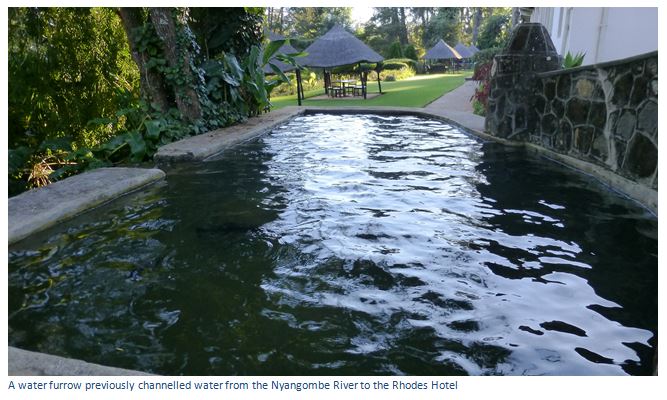 On Rhodes' death, his Nyanga Estate was bequeathed to the Nation in the following terms: "I give free of all duty whatsoever my landed property near Bulawayo [Sauerdale and World's View Farm in the Matobo, over 100,000 acres] . . . and my landed property at or near Inyanga ... to my Trustees . . . upon trust that my Trustees shall in such manner as in their uncontrolled discretion they shall think fit, cultivate the same respectively for the instruction of the people of Rhodesia . . . For the guidance of my Trustees I wish to record that in the cultivation of my said landed properties, I include such things as experimental farming, forestry, market and other gardening and fruit farming, irrigation and the teaching of any of those things.”

Petherham writes that by 1905 there were established orchards supplying Mutare and Salisbury with peaches and apples, plums and apricots. Afforestation was being undertaken with pines, eucalyptus (gums) and the indigenous "Mlanje cedar". Oats and barley were being grown, and so also was lucerne and a South American grass — Paspalum dilatatum — for stock feed. Sheep had been imported in the early stages by Rhodes, and in 1905 Wienholt (the estate manager) was expecting that the first consignment of wool would be placed on the London market.  Trout had also been stocked. In addition to cattle, mules, horses and donkeys, and small acreages of sugar beet, mangelwurzel and carrots had been planted. 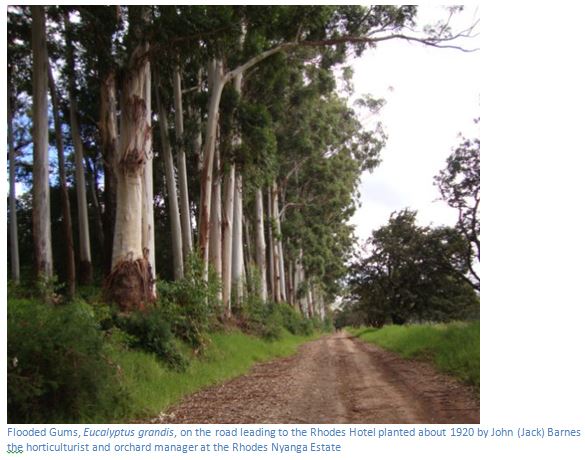 In 1918 the Estate at Nyanga was delegated to the Department of Agriculture, but agricultural experiments continued. Cattle were run on the Estate for some time. Attempts were made to Introduce game birds, but all the English pheasants introduced were killed by leopards, so were the Chikor, the Indian partridge. Experimental plots, of blackberries, raspberries, strawberries, currants and gooseberries were established, and trial plantings of nut-bearing trees were also made.

Later still it was decided that the orchards should be leased from the Estate by the Ministry of Agriculture and run as a Horticultural Experiment Station.  Other parts of the Estate are leased to the Forestry Commission and The Wattle Company, and farming operations were carried on until 1933. In that year it was decided to develop the area as a tourist resort. Rest camps were erected at various beauty spots and roads were built so that tourists could visit the different sites on the Estates.